The Kia Sorento is currently a three-row family crossover, though it was considered a compact SUV until the 2010 model year. 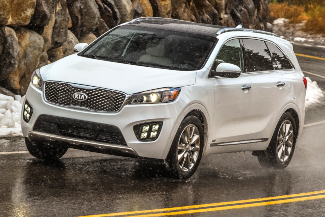 The third generation of Sorento now offers five trim levels. Along with the previous four versions, a base L model has been added. This trim has the 2.4-liter inline four-cylinder engine that makes 190 horsepower. It uses a six-speed automatic transmission and comes in front-wheel drive only.

With this L at the entry-level, the LX then becomes the upgrade with an optional 3.3-liter V6 engine that puts out 290 horsepower. Both FWD and AWD are available with this trim. The EX is the next upgrade and its base engine is a turbocharged 2.0-liter inline-four cylinder unit that makes 240 horsepower. The 3.3-liter V6 engine is optional for this trim as well. The SX trim comes with a standard V6 as well as extras like a navigation system and push-button start. The SXL is the top trim and is only available with the V6 engine. It offers a number of luxury additions such as climate-controlled seats, LED fog lights, 19-inch alloy wheels, upgraded sound system and a variety of advanced safety features.

The 2017 Sorento was a top safety pick by the IIHS.

Starting on the 2019 model year, Kia gave the Sorento a thorough refresh that included a new grille and projector beam headlights on the four lowest trims. The top trim is outfitted with LED headlights and daytime running lights. New exterior colors were also added as well as standard third-row seating.

A new 2.4-liter engine also replaces the 2.0-liter as the standard engine for the lower trims. The standard V6 on higher trims remains the 3.3-liter V6. 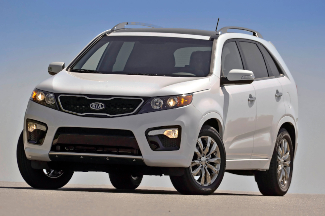 The Sorento redesign was nicknamed the XMA and it was the first Kia model built in the U.S. It was also the first vehicle from Kia to offer the UVO infotainment system.

This generation’s exterior was significantly different than its predecessor, which nearly caused Kia to consider changing the vehicle’s name entirely.

The base engine for this Sorento generation was a 2.4-liter four-cylinder engine. Due to the changes in construction and the elimination of the low-ratio transfer case, the Sorento was 475 pounds later than the previous model, boosting both performance and fuel economy.

Four models were offered in the second generation, including the base, LX, EX and SX. The SX was the top grade model and only came with a 3.5-liter, 276-horsepower V6 engine; this engine was optional on the LX and EX. Base and LX models were equipped with the 2.4-liter straight four-cylinder engine rated at 175 horsepower. An SX Limited model was offered in 2012.

In 2014, Kia refreshed this generation of Sorento. Changes included a revised instrument panel and new headlights and taillights. In 2015, the six-speed manual transmission was discontinued, an option that had only been available on the LX and Base models.

The Sorento received a number of awards in this generation, including a five-star safety rating and top safety pick from the Euro NCAP and Insurance Institute for Highway Safety respectively. Consumer Reports also gave the EX model an Excellent rating. 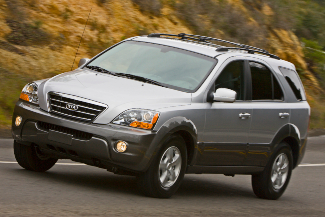 Like many SUVs of this era, the Kia Sorento debuted as a body-on-frame, truck-based SUV. It had a four-wheel drive system available as an option, and the low range setting garnered it some praise for off-roading ability.

Transmission options included a five-speed manual and four- or five-speed automatic. The main engine in this generation was a 3.5-liter V6 that was built by Hyundai. This V6 put out 192 horsepower and 217 pound-feet of torque.

Two trim levels were offered for this generation, including the base model LX and the upgraded model EX. Both trims had standard single-disc CD players, dual front airbags, side-impact airbags, AC, power doors and windows, keyless entry and a second-row bench seat with split folding function. A number of upgrades were also available for both trims.

The 2007 model received a facelift with a new 3.3-liter V6 engine putting out 235 horsepower. Also available was the 3.8-liter Lambda V6, which put out 263 horsepower. This also significantly increased the Sorento's towing power up to 5,000 pounds from the previous 3,500.

The EX trim offered full-time AWD and low modes for four-wheel drive. The base trim had part-time AWD with 4WD high and low.

The 2007 Sorento also garnered a crash safety rating of five stars by the National Highway Traffic Safety Administration. In 2009, the Sorento saw a grille change as its only significant upgrade before the next generation.