The engine is paired with a six-speed automatic transmission and standard full-time four-wheel-drive.

The GX460 is largely unchanged for the model year; the biggest change being the SUV's infotainment screen and setup inside. Other minor changes include an available Black Line Special Edition package and updated standard tech and driver assistance features. Lexus has also made their popular Nori Green paint color available on the GX for 2022.

Would we buy one? Yeah, we glamp. 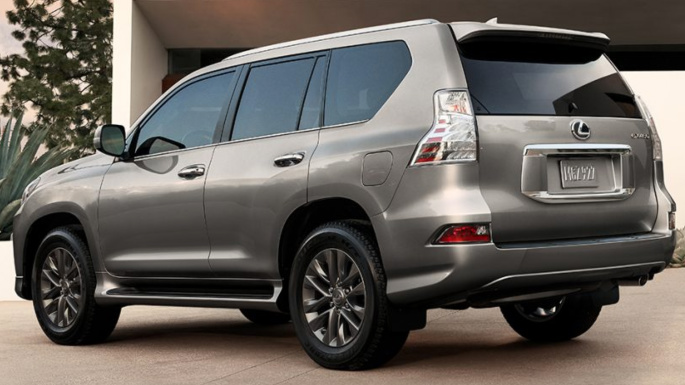 The Lexus GX460 is a three-row, midsized luxury SUV for buyers who also want a moderate amount of off-road capability. It rides on an old-school platform and has a dated powertrain which may also appeal to those wanting proven reliability above jaw-dropping specs and power figures. The GX competes in a very crowded segment that includes the Porsche Cayenne, BMW X5, Volvo XC90, and also off-road-oriented vehicles like the Land Rover Defender.

Unlike most of the luxury crossovers it competes with, the GX460 is built with a body on frame construction, like a conventional truck. That design lends itself better to off-road driving, as well as towing, but does not deliver the carlike ride quality that some buyers might expect. Lexus has done well to make the ride comfortable despite the live rear axle, but there is a reason many luxury SUVs have fully-independent suspension.

The Lexus GX460 received its last complete design overhaul in 2010, and some aspects of that decade of stasis are obvious. Lexus has done what it can with the aging vehicle including adding a larger infotainment system touchscreen which includes Apple CarPlay and Android Auto for the 2022 model year. Other updated tech include standard built-in navigation, parking assist, and power-folding side mirrors.

What the Lexus lacks in modern appointments, it makes up for in capability. The GX460 offers a maximum towing capacity of 6500 pounds, has 8.1 inches of grounds clearance, and Lexus’ Kinetic Dynamic Suspension System (KDSS) which delivers better off-road grip and performance, as well as a locking center differential for when things get real on the trail. This is a vehicle that can comfortably handle anything most families need in day-to-day driving and get the crew, a trailer, and all of their gear to a backcountry cabin for the weekend. 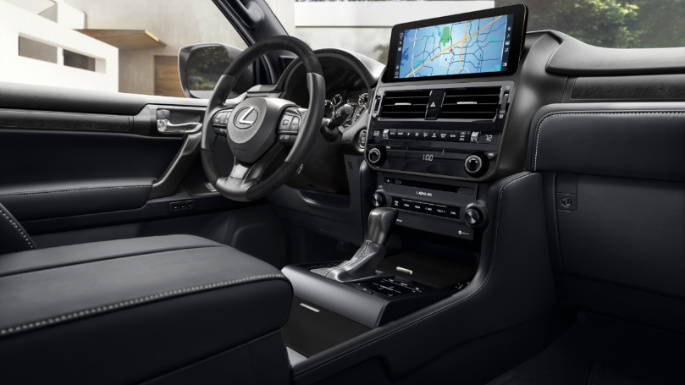 The Insurance Institute for Highway Safety (IIHS) has not given the 2022 Lexus GX a rating, nor has the National Highway Traffic Safety Administration (NHTSA) rated the GX in crash testing. Without safety scores or crash test data, we have chosen to give the GX an average rating. 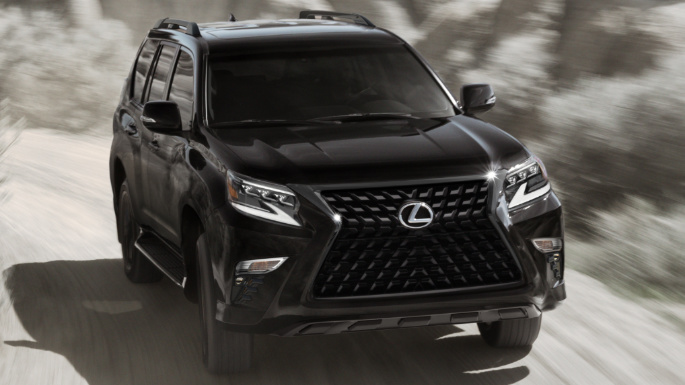 The power output and acceleration of the engine can generously be called adequate. It is much slower than the crossover-based competition in the class. However, we think a seven-second zero to 60 time is plenty fast for an off-roader with a 5266-pound curb weight. The engine does deliver enough power and torque to get up to and cruise easily at highway speeds.

Handling and braking are acceptable but trucklike. This is not a vehicle like the Porsche Cayenne that behaves like a sports car when on the road.

Considering its dated architecture, the GX is surprisingly comfortable and quiet during on-road driving, and we were pleasantly surprised by how stout and robust (and indeed luxurious) this truck felt, despite its age.

And, in spite of the live rear axle, the GX feels composed even at freeway speeds. If you want a Lexus that drives like a new car, look to the Lexus RX line of crossovers.

The large upright windows offer better visibility, and an airier overall interior feels than sportier-looking crossovers. The headroom is excellent in the first two rows for the same reason. 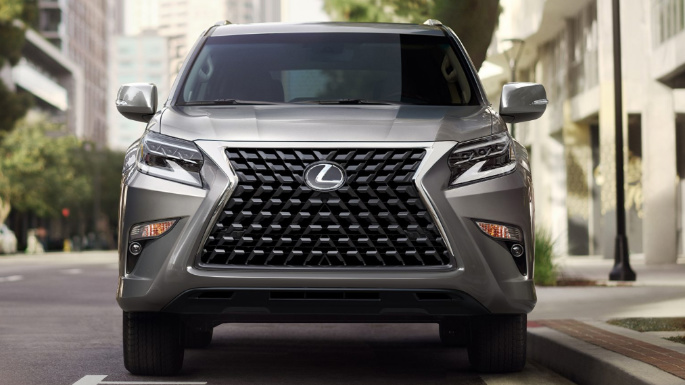 The Lexus GX460 is difficult to rate on the value scale, being somewhat of an outlier in the category. Though others in the class offer more luxury or on-road performance, few vehicles can touch the Lexus for utility and off-road performance.

With a base price in the mid-$50k area, the GX offers enough luxury and utility to be a luxury SUV contender. At this price point, it is disappointing that heated and ventilated front seats are not standard equipment.

Top trims will cost you a little under $70,000 dollars meaning a fully loaded model will ring up for less than many competitors’ high-end options.

The expected reliability and resale value for the Lexus GX460 are top of the class and certainly bolster its appeal. When considering long-term ownership costs and low depreciation, the Lexus is an even better value. 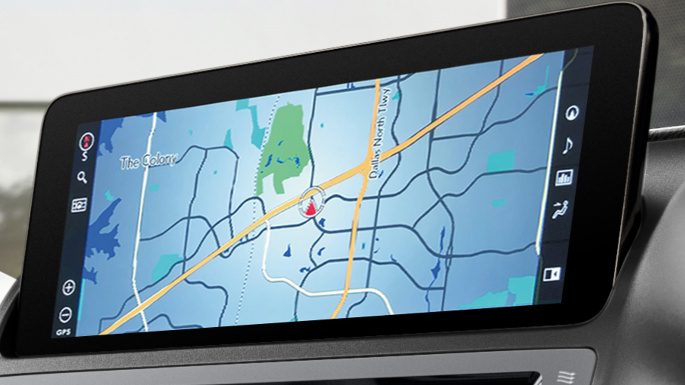 One of the big technology upgrades for the 2022 model year is a larger 10.3-inch touchscreen infotainment system touchscreen, which includes Apple CarPlay, Amazon Alexa, and Android Auto. You also get satellite radio, onboard navigation, Bluetooth connectivity, and at least nine speakers.

We found navigating the infotainment system to be less user-friendly and intuitive than many other options on the market. The inclusion of a touchpad, which can also be used to operate the tech features, hints again at the aging bones of this luxury SUV. Thankfully, there are redundant controls that let you avoid using the touchpad. 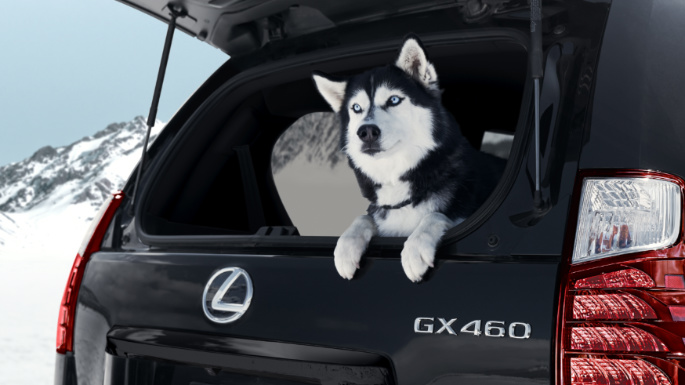 The Lexus GX is a true SUV. It can tow 6500 pounds and comes standard with most of the features needed to make it a composed off-road vehicle. If your lifestyle demands these features it is one of the best vehicles in the class.

The cargo area is surprisingly small for the class. With all three rows of seats upright there is a minuscule 11.6 cubic feet of space available out back. Folding down the third-row yields 46.7 cubic feet, and with both rear seat rows folded away, there are 64.7 cubic feet of cargo space available. Crossover-based models like the Audi Q7 have more space despite their sleeker shape.

The rear is accessed through a swinging hinged door rather than a hatch-style liftgate, which some buyers may find unusual. The rear window does lift up for quick access, or for easy loading.

As an off-roader, there are few luxury vehicles that can compete with the Lexus GX 460. With a locking center differential, reasonable ground clearance, and the KDSS suspension the GX is very capable. Electonic driving modes, full-time four-wheel drive, and a Crawl Control low-speed cruise control will get the GX to nearly any campsite, with passengers riding in luxury and style. An available Off-Road Package adds underbody shielding and a transmission cooler, in addition, to crawl control. 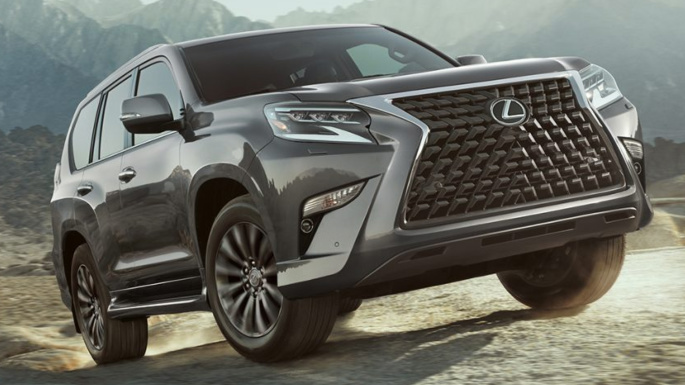 The GX460 interior is well thought out but dated. The presence of hard plastic touchpoints does not reflect the price tag, but the construction and quality of the interior overall is acceptable, thanks to excellent fit and finish. Look too close and the GX’s relationship to the Toyota 4Runner may become glaringly obvious.

The front seats are comfortable and offer the driver and passenger excellent visibility and seating position. Second-row seating is less comfortable than most of the class, and the third-row seats will not comfortably fit full-size adults.

Outside, the Lexus GX460 has a polarizing appearance, with a massive grille and aggressive front and rear facia which compromise the SUVs’ approach and departure angles. The Black Line Special Edition’s black trim makes the sheer size of the black grille less noticeable.

Overall the GX460 delivers something unique to the class. It is a truly capable SUV in both off-road prowess and it can be used for towing. It is less refined than much of the competition but makes up for those shortcomings with real utility and an expectation for long-term reliability. 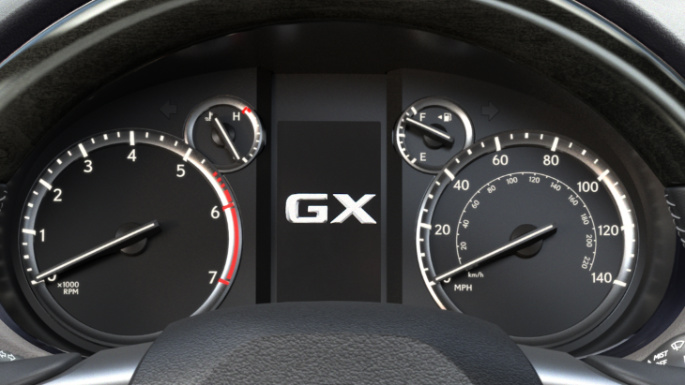 The EPA estimates fuel economy of 19 mpg highway, 15 city, and 16 in the combined cycle. During our week of testing over 260 miles of mixed freeway and around-town driving, we averaged 14.8 MPG.

The truck-based underpinnings of the GX means poor fuel economy for the segment. Competitors like the Volvo XC90 or BMW X5 deliver highway fuel mileage in the high twenties.

The GX460 forgoes turbochargers and smaller displacement engines for the simple, smooth, and available power of a larger V8, which costs fuel economy dearly. With the Toyota Tundra and Lexus LX moving to a more economical twin-turbo V6, it is possible a future GX could get better economy and more power. 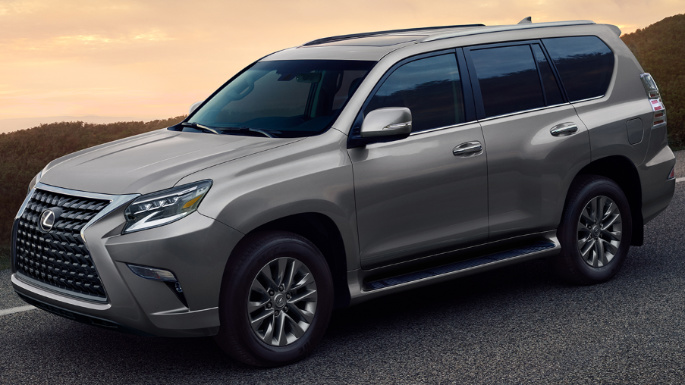 The base model Lexus GX460 starts at an MSRP of $56,700. For that entry-level price you get a leatherette interior, dual-zone climate control, LED headlights, and seating for seven. Technology included in the base package are items like the 10.3-inch touchscreen infotainment display, navigation system, moonroof, and satellite radio. The 4.6-liter V8 engine making 301 horsepower, full-time four-wheel drive, 18-inch alloy wheels, and the KDSS suspension are also standard equipment.

The next step up is the GX460 Premium which starts at $58,035. The Premium trim level includes heated and ventilated front seats, heated rear outboard seats, and three-zone automatic climate control. The interior styling is also classed up with wood and aluminum trim pieces.

The GX460 Black Line Special Edition is what we tested and it's largely an appearance package, starting at $60,353. Styling updates include open-pore wood trim, gray seat inserts, and stitching, and a black headliner. Exterior changes are all dark with clack trim around the grille and windows, black roof rails, scarlet taillamps, and black 18-inch wheels. It is almost worth the price for the improved looks alone.

The GX460 Luxury trim level is the pinnacle of premium for the GX line and starts at $66,210. Upgraded appointments include a wood and leather steering wheel, power-reclining third-row seat, leather upholstery, illuminated scuff plates, and 19-inch wheels. An adaptive variable suspension system smooths out road imperfections and includes auto-leveling air suspension in the rear.

Significant available packages include a Premium Plus Package with Captains Chairs, which adds the premium sounds system, heated captain’s chair second-row seats, and the power-folding third-row seat for $3,355. The Off-Road Package adds Panoramic View Monitor, Crawl Control, a skid plate for the fuel tank, and a transmission cooler for $1,570. Noticeably absent from the Off-Road Package are all-terrain tires, so leave a little room in your budget to upgrade right away, if you plan to get out of the trails.

If it were our money, we would get the base model, add the off-road package, and spend anything left in the budget on good all-terrain tires.