The 2020 Lincoln Aviator is a new, three-row luxury SUV, serving as a replacement for the old MKT crossover. It competes with models such as the Audi Q7, Cadillac XT6, Land Rover Discovery, Mercedes-Benz GLE-Class, and Volvo XC90.

This new model adopts a rear-wheel-drive platform that it shares with the Ford Explorer, but its styling echoes Lincoln’s current SUV line. All-wheel-drive is an option, and most models use a 400-horsepower engine that’s unique to Lincoln.

Other models use a new plug-in hybrid system with 494 horsepower thanks to an electric motor.

The 2020 Aviator’s exterior styling convincingly mimics the larger Navigator’s, with a modern design that also has a presence.

But at more than 17 feet long, some of that presence comes naturally. 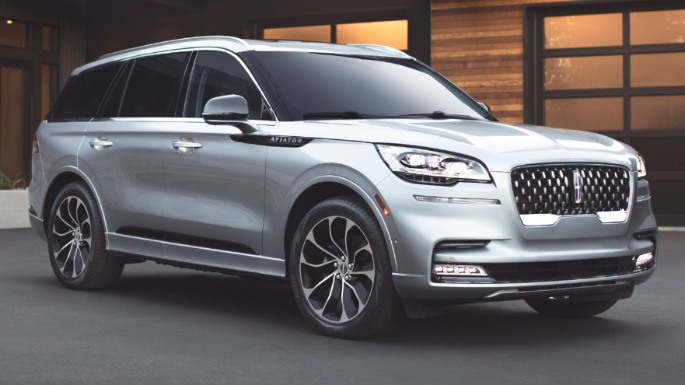 The tall grille matches pretty much everything in the Lincoln lineup and is immediately identifiable with the brand. The side profile may echo the related Ford Explorer’s, but generally, Lincoln has done a good job with the detailing. There is lots of chrome detailing on all models, but the 22-inch wheels that are available on all but the base trim keep up with the showy profile of the big Navigator’s. At the rear, the lights also emulate nearly all Lincoln models, even the sedans. 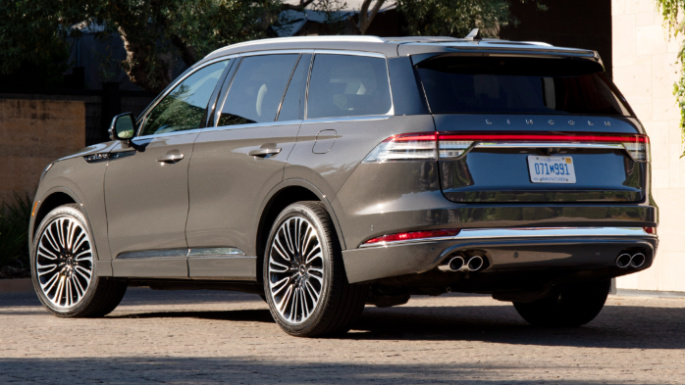 While it’s all a little copy-and-paste, unlike the Cadillac XT6, for example, Lincoln has done a better job making all Aviators look expensive.

TL;DR: Lots of style and the tech looks flashy, but not all models feel as expensive as they are.

The Aviator’s interior looks as luxurious as its exterior, with plenty of chrome and detailing surrounding lots of tech. 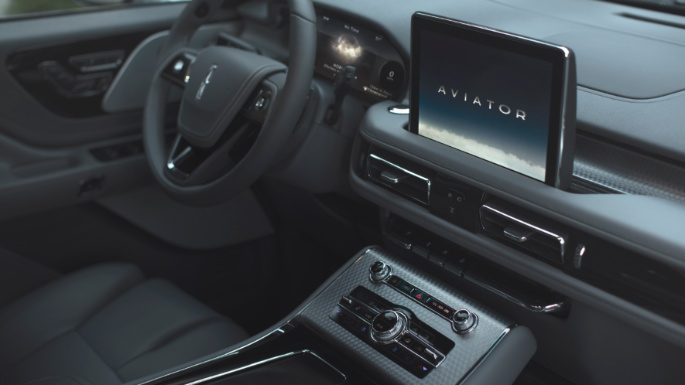 All but the base model get leather upholstery and seven seats as standard or a no-cost option (some get second-row captain’s chairs). Drivers are treated to power seats with as many as 30 different adjustments. A TFT screen replaces physical gauges for instruments, and various vehicle information can be shown with the switch of steering wheel-mounted controls. 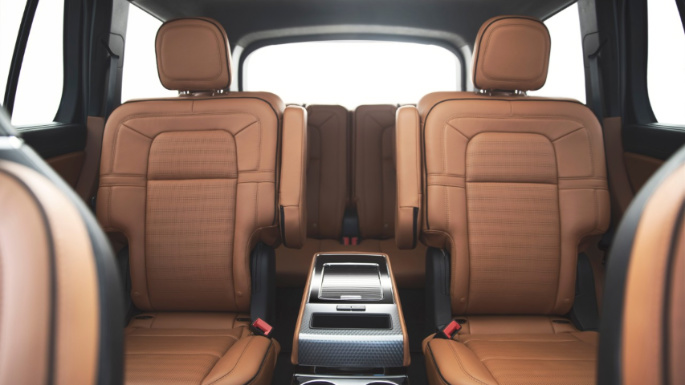 In the center, a 10.1-inch touchscreen controls all of the vehicle infotainment functions with Lincoln’s version of Ford’s Sync system, one which most drivers found more straightforward to use than the various scroll wheels or vertical touchscreens on competing models.

But physical controls for some audio and climate control functions are small and hard to find at a glance. And the buttons to control the transmission are mounted under the horizontal air vents, which can be confusing at first.

Reviewers generally found the first and second rows comfortable, although the optional 30-way adjustable front seats can be tedious to use because of all of the adjustments. And the materials on lower trims feel more mainstream than those of the top Black Label trim, as well as that of the Audi Q7 or Volvo XC90. That’s rather annoying considering the price of even the base model. 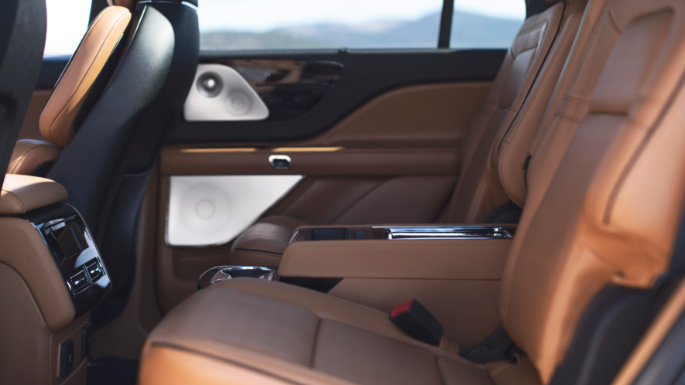 Still, the Lincoln Aviator boasts a stylish interior that’s easy to use. And that’s not always assured with luxury vehicles.

TL;DR: Generous space and cargo room are welcomed, but a cramped third row is a letdown.

It’s expected, given its imposing size, but the Aviator mostly boasts a spacious cabin.

Perhaps befitting of a large American luxury vehicle, this Lincoln has lots of space for passengers and their things. The wide cabin means passengers can travel in comfort, as well as style. And like many large SUVs, there are numerous cupholders and storage areas in the front area. Second-row passengers can opt for a console with USB charge points on all but the base model, too. 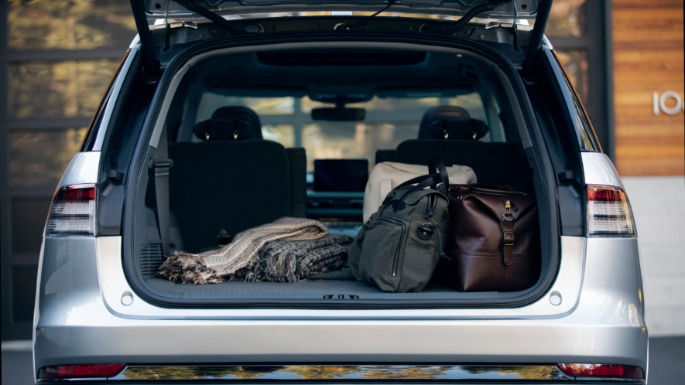 But some reviewers consider the third-row to be purely for kids and less comfortable than it should be considering the Aviator’s size. While more spacious than a Mercedes-Benz GLE’s optional third-row or the third row in a Cadillac XT6, the Land Rover Discovery and Volvo XC90 offer space more adults would find adequate.

At least cargo space is an Aviator is competitive for the class, with 18.3 cubic feet with the third row up, or 77.7 cubic feet with all the seats folded. That’s about the same overall space as the Cadillac XT6, and way better than the use of space in the large Audi Q7. But the smaller Mercedes-Benz GLE and Volvo XC90 have closer to 85 cubic feet of overall space, and the Land Rover Discovery is positively cavernous by comparison. At least the battery pack on the plug-in hybrid models doesn’t intrude into the interior. 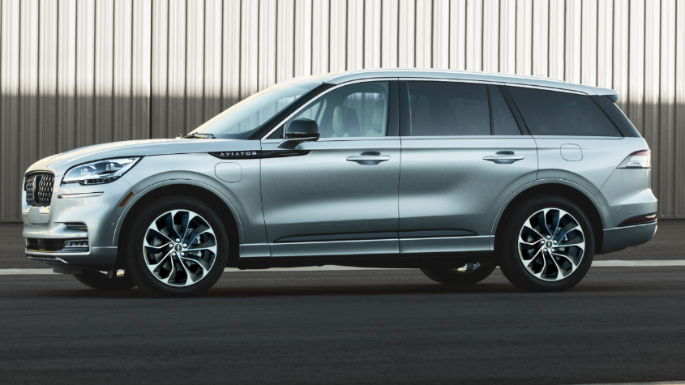 But while down on numbers, reviewers consider the Aviator to be spacious and comfortable. At least for everyone not in the third-row seat.

TL;DR: Lots of screens are nice, but there are also some surprises. The Aviator boasts lots of technology, some of it useful and some downright decandent. 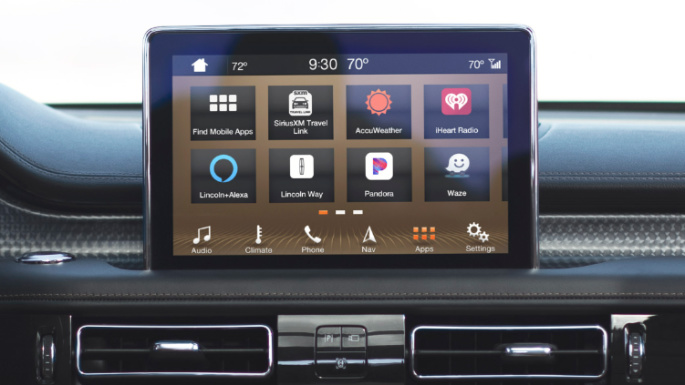 All but the base model have the option of Lincoln’s Phone as Key system, which can allow your smartphone to operate the vehicle’s locks or windows from a short distance, or turn on the lights and lower the air suspension from a shorter distance to make it easier to get in. The adaptive suspension can also “read the road,” with cameras that can read potholes and try to soften or stiffen the suspension to reduce the impact passengers feel.

Most models feature a 14-speaker Revel audio system as standard, but a 28-speaker system is optional. Apple CarPlay and Android Auto are also standard.

The Mercedes-Benz GLE-Class also vies for customers with available technology, but its controls have been noted to be far more complicated than Lincoln’s relative simplicity. And some of its options get pricey, too.

Lincoln made a lot of safety technology standard on the 2020 Aviator. But there are even more offered on most models.

Standard features include automatic emergency braking and forward-collision warning, blind-spot monitoring, and lane-keeping aid on all models. But all but the base model can be equipped with the suite of features called Lincoln Co-Pilot 360 Plus, which adds adaptive cruise control with a traffic jam assist. This feature means drivers can come to a complete stop with the cruise control on and tap the system on again as traffic resumes moving. Also included is evasive steering assist to help avoid an impending crash, as well as a lane-centering feature in case the vehicle starts to drift off the road.

While Lincoln doesn’t have a system as sophisticated as Volvo’s Pilot Assist that comes on the XC90, these are all features on par with the class, and Lincoln makes them more accessible for the price.

Neither the Insurance Institute for Highway Safety nor the National Highway Traffic Safety Administration has yet tested the 2020 Lincoln Aviator.

TL;DR: Two engine choices offer plenty of power for a large SUV, but one adds a little efficiency.

The Lincoln Aviator boasts more standard power than pretty much every rival in this class, with an even more powerful engine option, too. But it’s necessary given the vehicle’s weight.

Standard and Reserve models get a 3.0-liter twin-turbocharged V6 with 400 horsepower and 415 lb-ft of torque, mated to a 10-speed automatic transmission. Rear-wheel-drive is standard, while all-wheel-drive is optional.

Aviator Grand Touring and Black Label models get a version of the V6 powertrain mated to a plug-in hybrid electric system, which raises power to 494 horsepower and 630 lb-ft of torque. All-wheel-drive is standard on these models.

Reviewers remarked the gasoline-engined models had sufficient power off the line, even if the roughly 4,800-pound curb weight of those models blunts performance a bit. Still, they reported better acceleration than models like the Cadillac XT6, Land Rover Discovery, and Volvo XC90.

But plug-in hybrid models offer even more thrust, thanks to the generous offering of torque offsetting their roughly 300-pound weight gain. That said, some noticed a little hiccup when shifting between electric power and hybrid propulsion. Lincoln quotes an 18-mile range, which is not as good as the plug-in hybrid version of the Volvo.

Handling was a slight negative, with the Lincoln’s agility called into question. Its size likely has something to do with it, but most testers found improvement on models with the air suspension that’s standard with all-wheel-drive. Rear-wheel-drive models get a standard steel-coil suspension.

But overall, the Aviator scores well for being comfortable and offering an upscale experience behind the wheel – as a big American car should.

The EPA rates fuel economy for rear-wheel-drive Lincoln Aviator models at 18 mpg city, 26 highway and 21 combined. Adding all-wheel-drive lowers the ratings to 17 city, 24 highway and 20 combined. These figures are on par with most V6-powered three-row SUVs.

The Aviator starts in the $50,000 range, but options can quickly send the price well into the realm of luxury vehicles. It is offered in four trims.

The Reserve I Package goes further with the Elements Package, as well as a panoramic sunroof, and the Lincoln Co-Pilot 360 Plus Package with adaptive cruise control, active lane keep assist, and a self-parking feature.

A Dynamic Handling Package includes adaptive suspension and an adaptive steering system, while the Convenience Package adds a head-up display, soft close doors, wireless phone charging, and the ability to use a phone app as a key. All-wheel-drive and second-row captains chairs are also optional.

The 2020 Lincoln Aviator is considered a formidable competitor among three-row luxury SUVs, with reviewers enamored with its style and the way it drives, as well as its power and available technology.

The Mercedes-Benz GLE-Class may also be new, but its third-row seat is small. The 2020 Volvo XC90 looks fresher, but its infotainment system is harder to use, and some buyers may not be happy that only four-cylinder engines are offered. The Land Rover Discovery is enormous inside and boasts strong off-road credentials, but its technology is a step back. The Audi Q7 is far less spacious, and the Cadillac XT6 doesn’t feel luxurious enough.

A modestly optioned Reserve model is considered to be the best choice because some of the Aviator’s more lavish options get expensive quickly. The top-level Black Label model does pose a good rival for a loaded plug-in Volvo XC90 T8 Inscription, but adding too much equipment to a Reserve pushes the price too close to $80,000.

Still, in this company, the Aviator manages to shine and be a solid choice in the class.