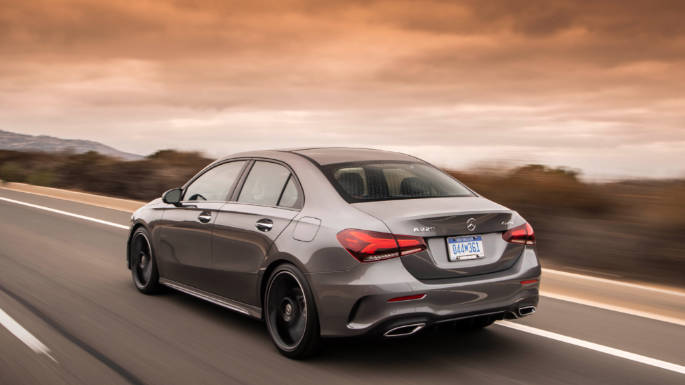 The Mercedes-Benz A220 is a new compact luxury sedan from Mercedes. It’s sold alongside the brand’s CLA four-door coupe, which runs a few thousand dollars more and is currently using a previous-generation platform and interior.

The Mercedes-Benz A-Class is all-new, and new to the U.S. market, though it’s been around in other markets (as a hatchback) for years.

This entry-level sedan comes with a 2.0-liter, turbocharged four-cylinder engine that makes 188 horsepower and 221 pound-feet of torque. The base model we tested is front-wheel-drive, while the all-wheel-drive 4Matic model will run you another $2,000. Both versions use a seven-speed dual-clutch transmission with paddle shifters.

Soon a performance-oriented A35 AMG version will be available, which will offer 302 horsepower from a 2.0-liter turbocharged four-cylinder, plus standard all-wheel-drive. Budget at least $45,000 when this model hits the US market.

Mercedes is also expected to release an even hotter A-Class sedan, dubbed the A45, that should pack over 400 horsepower and all-wheel-drive.

Turning back to the A220, it’s aimed at fellow entry-level luxe sedans like the Audi A3, BMW’s upcoming 2-Series four-door coupe, and Acura ILX. The A220 sits at the bottom of Mercedes’ sedan lineup, which includes the aforementioned CLA, C-Class, E-Class, CLS, S-Class, and Mercedes-AMG GT four-door coupe.

Handsome: It’s not always easy to make a small vehicle look as handsome as the larger ones in a brand’s lineup. So give Mercedes a heap of credit for being able to make the A-Class sedan just as stylish as anything else the brand sells. This also help make it look more upscale and expensive than it really is; though it may be the cheapest car wearing a tri-star emblem, no one told the A-Class that. 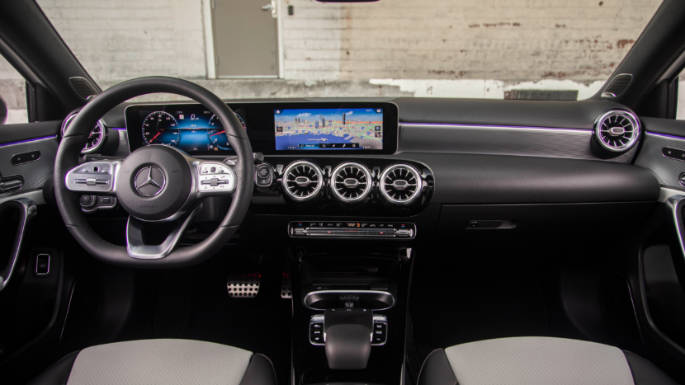 Actual luxury: Though our base tester had thousands of dollars of options added to it, buyers don’t have to spring for the loaded version to feel like they’re in a luxury car. The base base version -- without any options -- still comes with basically everything you’d want in a luxury vehicle (our biggest gripe was the lack of heated seats).

Plenty of Go: We were continuously impressed with the pep the A220 has. Many turbocharged, four-cylinder vehicles (mostly from the German brands) have traditionally suffered from turbo lag and have missed that feeling of true acceleration power. Not this Mercedes; the torque and horsepower are more than enough -- even from a dead stop -- to get the car moving quick.

TLDR: Options get pricey, rear seat is tight, handling could be sharper. 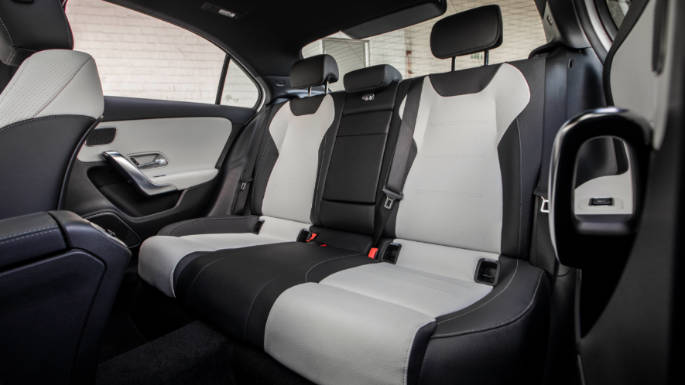 Tight rear seat: This should come as no surprise given the car’s small size, but we were hoping for a little more room in the rear seat. Certainly not a dealbreaker by any means, but if you’re regularly shuttling around tall people in the back seat, this might not be the car for you.

Handling quibbles: While we were generally impressed with the eagerness of the A220 in daily driving, at times its dynamic character could be a bit vague -- steering and handling and whatnot. But we’re willing to forgive this since the front-wheel-drive A220 isn’t meant to be a performance sedan. 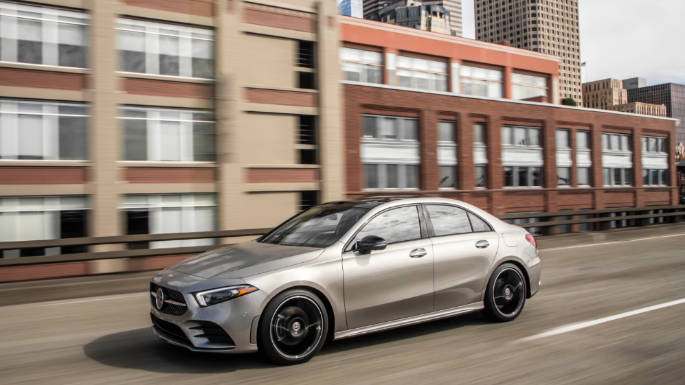 The base A220 starts at just under $34,000 for the front-wheel-drive model. Standard features on all models includes faux leather seats that are power-operated up front, 40/20/40 split folding rear seats, dual-zone climate control, app connectivity including remote start, panoramic roof, 17-inch alloy wheels, a start/stop system, LED headlamps and taillamps, backup camera, a seven-inch digital instrument panel plus a dashboard-mounted, seven-inch touchscreen for infotainment system that is controlled by touchpad, and Bluetooth, Apple CarPlay and Android Auto connectivity. 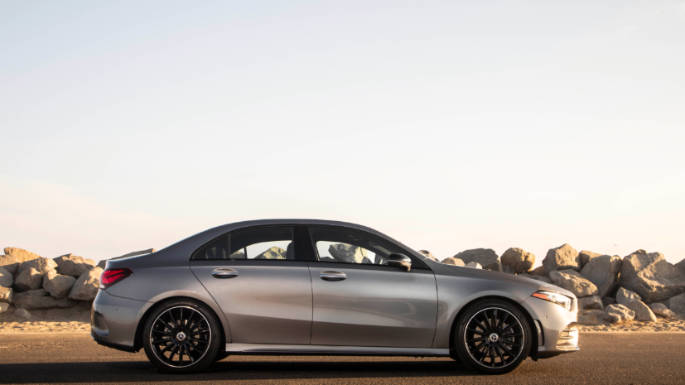 Front-wheel-drive is standard on the A220, while Mercedes’ A220 4Matic all-wheel-drive system adds another $2,000.

Despite this reasonable starting price, our tester clocked in at a cool $45,200. What happened? Options, lots of them.

The big ones were the $1,550 Premium Package (which added two huge 10.25-inch digital screens, one for the instrument panel and one for the dashboard; keyless entry and start, and power-folding side-view mirrors), and the $2,310 AMG line package (unique exterior body cladding and grille, and perforated disc brakes). There were others that should come standard on any luxury car -- entry-level or not -- like heated front seats or blind-spot assist.

This Mercedes A220 doesn’t have a deep bench of competitors against it.

BMW is about to launch a new front-wheel-drive 2 Series four-door coupe that will likely be the A-Class’s biggest rivals. There’s also Audi’s A3 sedan and Acura’s ILX.

While we haven’t yet driven the BMW, we would recommend that people interested in the A220 take a look at the A3 as well, though we’d probably choose the Mercedes if for no other reason than it’s much newer. The Acura can’t quite match this A220 in terms of panache but it’s also thousands of dollars less than the three German models listed here.