Despite growing competition from its own Model 3 electric sedan, and continued news about upcoming electric vehicles from legacy automakers, Tesla’s Model S and Model X vehicles have continued to hold their resale value better than all of their gas-powered competitors, a study by Autolist.com has found.

Based on vehicle listings from January 1, 2012, through November 5, 2018, on Autolist.com, the value of a Model S with 50,000 miles on it had declined on average 27 percent from its original list price. A comparable Mercedes S Class -- the next closest competitor in the large luxury sedan segment -- had lost an average of 33 percent of its original list price after accumulating 50,000 miles.

The competitor with the greatest depreciation was Jaguar’s XJ, which lost an average of 45 percent of its listing value after 50,000 miles.

Also included in the Model S’ segment are the BMW 7 Series, Audi A8, Porsche Panamera and Lexus LS. Autolist’s data showed that at no point in the depreciation curve of any of these vehicles did a gas-powered rival have a stronger resale value than the Tesla Model S.

Not only is the Model S’ depreciation value better than all of its luxury sedan peers, but it’s also holding its value even as more examples of used Model S sedans hit the market. In August 2016, a Model S with 50,000 miles lost an average of 28 percent of its original list price, according to an Autolist study at that time.

The depreciation gap between Tesla’s Model X crossover and its rivals was even more pronounced, Autolist found. 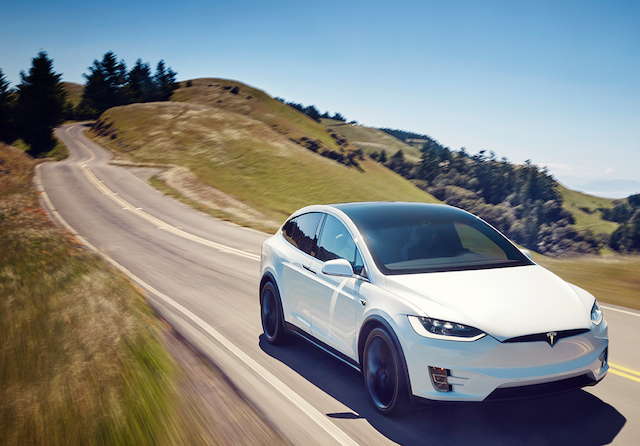 A Model X with 50,000 miles on it saw its value decline 23 percent from its original list price. The next closest model in the segment was the Lincoln Navigator, which dropped in value by an average of 34 percent. The BMW X5 faired the worst in this segment, slipping an average of 37 percent.

This segment also measured the values of the Audi Q7, Mercedes GLS (previously the GL), the Infiniti QX80, Cadillac Escalade and Range Rover. Like its sedan counterpart, the depreciation curve for the Model X from 10,000 to 100,000 miles consistently outperforms its gas-powered peers.

These findings are based on 35,442 listings of unique, used Model S sedans on Autolist.com between January 1, 2012, and November 5, 2018. Overall, the data set included 1.209 million vehicle listings for the large luxury sedan segment.

On the Model X side, the resale values were calculated using 4,242 unique, used Model X crossovers listed for sale on Autolist.com over the same period. The dataset included 1.683 million vehicle listings in the large luxury SUV segment.

These results show that demand for used Tesla Model S and Model X vehicles hasn’t been affected by the arrival of the cheaper, smaller Model 3. Nor has demand been affected by Tesla’s woes in 2018.

The electric automaker has been hit with several investigations by the SEC and Department of Justice, along with production and distribution headaches for the Model 3 sedan.

Even Musk himself admitted in an interview with HBO in late November that Tesla came within "single-digit weeks" of a "threat of death" this past summer.

Amid all the turmoil, there have been some bright spots for the company in 2018; Tesla posted a small profit in the third quarter; it also built more than 56,000 Model 3 sedans that same quarter. To date, Tesla has built more than 110,000 Model 3 vehicles in 2018, according to data from Automotive News.