The Nissan Armada is a full-sized, truck-based SUV with rear-wheel drive or four-wheel drive. It has three rows of seats and can fit seven or eight passengers, depending on the model. The Armada is currently in its second generation. 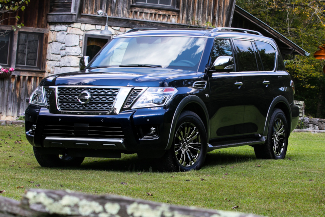 The newest generation of Armada remains a body-on-frame full-size SUV and continues to share many elements of its platform and powertrain with the Nissan Titan full-size pickup. It's also very similar to the Infiniti QX80 luxury SUV.

The Armada grew for this generation in both length (1.2 inches overall) and width (0.6 inches), but height and wheelbase were slightly reduced. It claims best-in-class second-row headroom and legroom.

It comes with a 5.6-liter V8 engine with 390 horsepower and a seven-speed automatic transmission featuring downshift rev matching and adaptive shift control. A towing package allows it to tow up to 8,500 pounds. The Armada is offered in both 2WD and 4WD.

Fuel economy for the 2WD Armada maxes out at 14 mpg in the city and 19 on the highway. 4WD versions take a hit of 1 mpg in each category.

Exterior styling was also refreshed with sharper lines a modern roofline and its many curved exterior panels mirror those on the Infiniti QX80. The V-motion grille now features all LED lights, including low-beams, daytime running lights and taillights. Several new safety features were added, including forward-collision warning, emergency braking, lane departure prevention and blind-spot warning. Cameras include a rearview camera and a 360-degree monitor that can detect moving objects on the top-end Platinum trim.

There are three trim levels: SV, SL and Platinum.

The SV trim has standard features like Bluetooth capability, 18-inch wheels, power-adjustable driver's seat, adjustable pedals, heated seats in the front and second row, rearview camera, parking sensors and climate control. A 13-speaker Bose audio system is also standard along with an 8-inch info display. The 4WD option is available for an additional price as is the Driver Package, which adds fog lights, an interior mirror with compass and auto-dimming, plus power liftgate, trailer harness, power seats in the third row and a universal garage opener.

The highest Platinum trim comes with features such as a rear entertainment system, power moonroof and 20-inch alloy wheels. Climate controlled front seats are standard and captain's chairs for the second row are available.

In 2019, all models now came standard with intelligent cruise control, forward collision warning, rearview monitor, rear door alert and emergency braking. The door alert system uses a display message and a horn to alert drivers of anything left in the backseat. 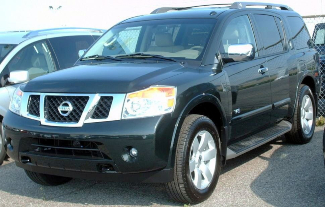 The first generation of Armada was initially called the Pathfinder Armada, but that was dropped after the 2004 model year. The Armada debuted as a truck-based SUV based on the Nissan Titan and built on the Nissan F-Alpha platform. It became the automaker's biggest SUV over the Pathfinder.

It offered rear-wheel-drive standard and optional four-wheel-drive. It featured four-wheel independent suspension and three rows of seating to accommodate up to eight passengers.

A 2008 refresh gave the Armada slightly more power with 317 horsepower, but towing capacity remained the same at about 9,100 pounds.

The 2011 model removed the SE and Off-Road trims and went with a tiered format. The SV became the base trim, SL was the middle trim and Platinum became the top trim.

The 2013 Armada made some technology upgrades with Bluetooth and satellite radio becoming standard across trims. It also added a USB port and a disk drive with 40 GB of storage. The DVD entertainment system included mounted screens behind the front head restraints.

A 2015 upgrade saw a refresh of interior door panels, plus additional color choices on the exterior and a new style for the 20-inch wheels on the SL and Platinum trims. The Platinum trim also came with an optional Reserve Package that added brown carpet and unique interior trim, plus dark chrome on the wheels and the exterior trim. The SL only included one option and that was a power moonroof. The SV trim offered an optional Driver Package that included a backup camera, power liftgate and Bose audio system.