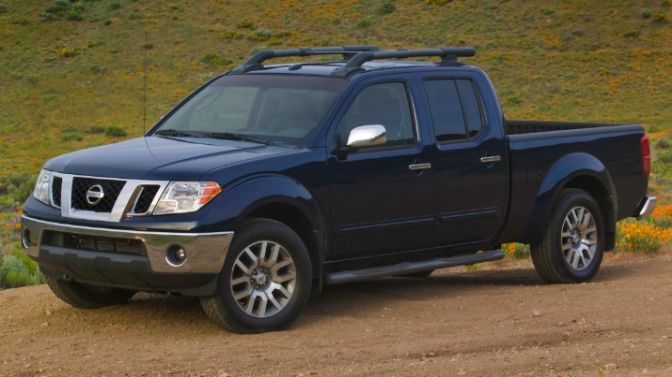 Nissan released a redesigned Frontier for 2005. Based on the newly released Titan full-size pickup and the upsized Pathfinder, the Frontier added size, capability, and refinement to match rivals in the new “midsize” pickup class.

The Single Cab was dropped, but King and Crew cab models continued, and with new engines. An upsized 152-horsepower 2.5-liter four-cylinder was standard on base models, while a new 261-horsepower 4.0-liter V6 was the upgraded engine.

A six-speed manual and five-speed automatic were also new, as was traction control and a hill descent control system. Top models could tow up to 6,500 pounds – not far off of some full-size pickups.

Inside, the Frontier looked more like Nissan’s new trucks and SUVs. It also had more space, crucial for Crew Cab models, which gained a more usable rear seat. There was also a more contemporary dashboard and more car-like finishes. Options such as leather upholstery were now available, too. But off-road versions like the Pro4X were aimed at those who wanted more off-road ability or off-road looks.

The 2005 Frontier arrived just as the midsize pickup market was cratering, and fuel prices were again on the rise. A dip in sales meant Nissan didn’t update it too much until 2009 when a re-profiled grille and hood and new wheel designs were added to freshen the exterior appearance.

A related model called the Suzuki Equator was also released at this time, but poor sales and Suzuki’s decision to end its automobile sales in the US resulted in that model being dropped in 2013. A planned diesel model with a 2.8-liter four-cylinder was shown in 2014 but never materialized.

Apart from some attempts to keep the technology modern – a USB port, Bluetooth, and push-button start, for example – and more special edition models with different wheels and stickers, the Frontier was mostly left untouched until 2020.

For 2020, Nissan replaced both the four-cylinder and V6 engines with a new, 310-horsepower 3.8-liter V6 and added a nine-speed automatic. The six-speed manual was finally canceled at this time, too.

While the second-generation Frontier has lived a long life, it will be replaced, and the 2020 model is at least a preview of what’s to come. 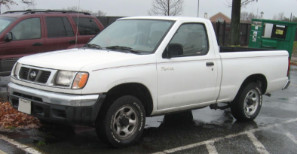 In a bid to update Nissan’s dated Hardbody truck, the Nissan Frontier was introduced for 1997. It was significantly more updated using the company’s compact pickup truck, or at least it looked more modern because it looked mechanically similar to the old Hardbody. And it continued to offer a single cab or larger “King Cab” models, in two-wheel-drive and four-wheel-drive variants.

Initially, a 143-horsepower, 2.4-liter four-cylinder was the only engine, but a 180-horsepower, 3.3-liter V6 from the Pathfinder SUV was quickly added and finally put Nissan on equal footing with rivals such as the Ford Ranger and Toyota Tacoma. A 5-speed manual and 4-speed automatic transmissions were available. Various packages were added through the Frontier’s life, such as the Desert Runner, which was a 4x2 King Cab model, but with a V6 and the 4x4 model’s ride height.

For 2000, Nissan one-upped its competition with the four-door Crew Cab model, adding four front-hinged doors and a three-place rear seat in an attempt to make the Frontier more of a family vehicle (even if the cab was still pretty small for four). 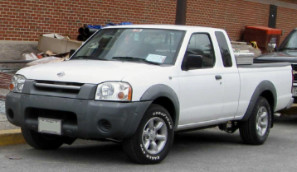 More changes were made for 2001 (seen above), with more aggressive exterior styling and a newly available supercharged V6 with 210 horsepower that kept the Frontier as competitive as it could. Eventually, Nissan needed a new design.

History:
Nissan has long been a pioneer in compact pickup trucks around the world, and the Frontier is its entry in the US. Before compact SUVs became the break-out hit, compact pickups were. Through the rising fuel costs of the 1970s, they offered much of the practicality of full-size trucks to suburban families or light-duty users, without the bulky size and ever-rising fuel bills. By the ‘80s, they were cemented as lifestyle vehicles or inexpensive work vehicles. Some were basic (usually white) two-door models, while others were lifted 4x4 versions in bright colors, alloy wheels, and plenty of stick-on graphics.

This continued into the ‘90s, and while Nissan still had plenty of success with its old Hardbody model, rivals were keeping up to date with V6 engines, more modern styling, and more comfortable interiors. In the same way, SUVs were becoming more sport than utility, Nissan needed to update its compact truck to keep with the times. Softer styling and more convenience features, along with greater passenger comfort and power, led to the Frontier in 1997.