Following a makeover for the 2020 model year, the Nissan Sentra has ripened into a prime specimen of the compact sedan genre.

With competitive safety, technology, and fuel economy now supplemented by an attractive exterior and interior design, the Sentra no longer feels like a compromise—it feels like a smart choice. 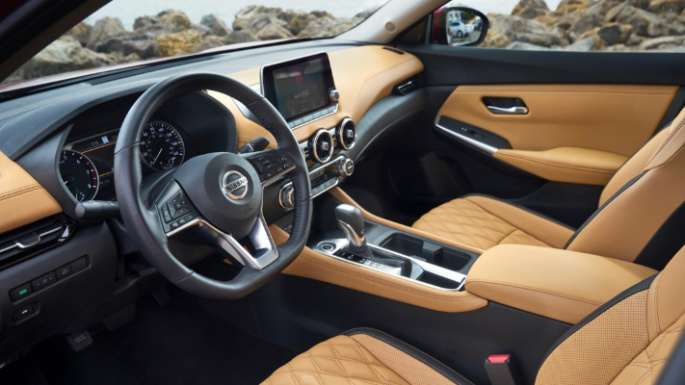 The Sentra entered its eighth generation of production last year. It began life as a sub-compact sedan in 1982, replacing the Datsun 210, and has appeared as a two-door coupe, a four-door sedan, a five-door hatchback, and a station wagon over its generations, settling into compact four-door sedan form in its fifth generation in 2000.

The Sentra wears an athletic exterior, distinguished by crisp bends and lines, a bold look for a car that used to wear its sheet metal like a housecoat. Like all current Nissan vehicles, Sentra’s front end has the V-Motion grille with a proud Nissan badge in the center of a black mesh. Expressive horizontally arrayed headlights (LED available) give the car a squinty, serious look.

Inside the Sentra, the layered dash feels positively expansive, and an 8-inch infotainment touchscreen (standard on SR; available on lower trim levels) at the top of the center stack is perfectly positioned. The textured plastic on the center console and doors is much better than the imitation wood veneers of the past. A flat-bottomed multi-function steering wheel is also welcome, adding a subtle sporty touch that also improves comfort for long-limbed drivers. Sentra’s second row is roomy for the class, though better suited for two passengers than three across—the hard, narrow center cushion is a bit of a penalty box. The Sentra’s trunk can swallow up to 14.3 cubic feet of cargo, and the second row is split 60/40 to fold down for bigger packages to intrude into the cabin. 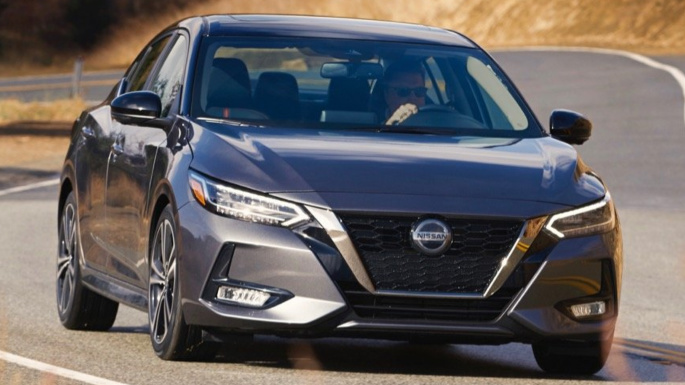 All Sentra models get a new 2.0-liter naturally aspirated (non-turbo) four-cylinder engine that’s tuned to produce 149 horsepower and 146 pound-feet of torque. Front-wheel drive (FWD) with an Xtronic CVT (continuously variable automatic transmission) makes the "S" car go, and not at a snail’s pace, either. Tipping the scales at just 3,036 to 3,084 pounds, the Sentra SR is a relative lightweight, and while it is not fast, the nicely sorted standard CVT delivers adequate performance for commuting and hops around town. Fuel economy is 29 mpg city/39 mpg highway/33 mpg combined for S and SV models, 28 mpg city/37 mpg highway/32 mpg combined for SR models.

A big part of the driving experience is feel. How does the car align with your body? How do the controls feel under your hands? Is there a feeling of solidity and substance to the vehicle? On all counts, Sentra returns positive feedback, much improved over previous generations of the economy car. While we still don’t love CVT setups, we have to admit Nissan has the best of the bunch. Many drivers will never notice the difference between the CVT and a conventional stepped-gear transmission—they’ll just appreciate the efficiency when they go to the gas pump.

SV and SR models come with front and rear disc brakes, while entry-level Sentra S models are front disc/rear drums. The suspension is four-wheel independent (MacPherson struts front/multi-link rear) with stabilizer bars at both ends. Along with dual-pinion electric steering with vehicle-speed sensitive power assist, the results are tidy road manners and cornering—almost fun. While we’re almost always on the side of more power, the Sentra’s 149 hp feel like the right amount for a realistic balance of fuel economy and intended purpose. 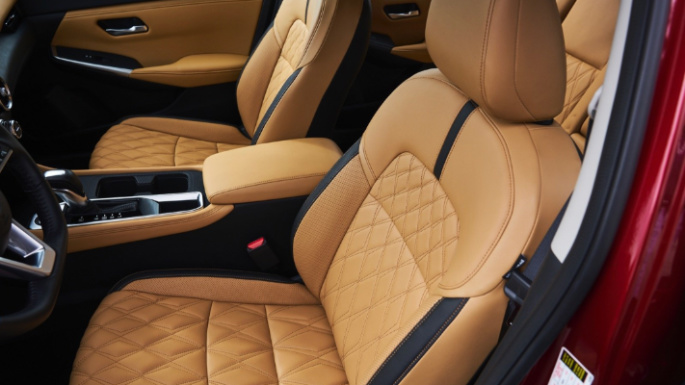 There’s a lot to like about the way the Sentra just plain works. Features are well-placed within the interior, from the infotainment touchscreen display on the top of the center stack to the neatly grouped controls, knobs, and buttons lower in the tower. Nissan has resisted the urge to innovate the interfaces, sticking with a traditional gear selector lever in the center console, open cupholders with gripping “fingers,” a big glove compartment, and roomy covered storage beneath the center armrest.

Two USB-A ports, one USB-C port, and a 12-volt port are at the bottom of the center stack with a small cubby in front. We prefer those connections in a covered compartment to minimize clutter from wires and devices and to assure that if (when) you forget a connected device in the vehicle, it won’t be on display to tempt potential thieves. Big door pockets (front and rear) are a welcome feature, ready to handle those water bottles so you can remain hydrated.

Nissan’s Zero Gravity front bucket seats live up to their reputation, delivering comfort on long rides. If you had to drive cross-country in your Sentra, all of these features would add up to a tolerable trip. You can get a six-way power-adjustable driver’s seat with two-way power lumbar as part of the $2,270 Premium Package on SV and SR models, which also includes heated front seats, leather or Prima-Tex seating, and a power-sliding glass moonroof. 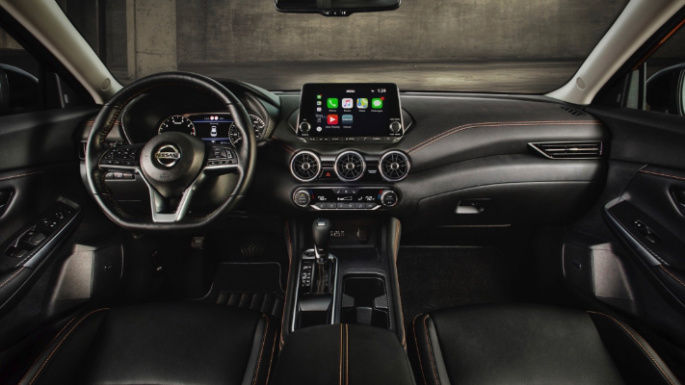 Standard audio in the Sentra starts with a simple AM/FM/USB with four speakers in the S, upgraded to six speakers and SiriusXM capability in SV and SR, with an optional premium Bose system with eight speakers available in the SR. Apple CarPlay and Android Auto integration is included across the board, along with Bluetooth audio and hands-free, along with hands-free text-messaging assistant. A 7-inch touchscreen interface comes with the S, while SV and SR get an 8-inch touchscreen at the top of the center stack.

Navigation is only available by subscription to NissanConnect services on SR models, though of course, you’ve got navigation and other apps on your smartphone, which you can operate via Sentra’s touchscreen interface and Apple CarPlay or Android Auto when hooked up with a USB cable.

NissanConnect also includes a WiFi hotspot, and interfaces with a smartphone app for remote access to some vehicle functions like remote start/stop, lights, alarm, lock, and unlock. The system can help you find where you’ve parked your car, and even track a stolen vehicle. You can use an Amazon Alexa device or Google Assistant to send voice commands to your car. With Alexa and Google, you can search for destinations in the comfort of your home, and send the results to your car. It’s a lot of tech—we only wish it could be ordered for S and SV models, too. 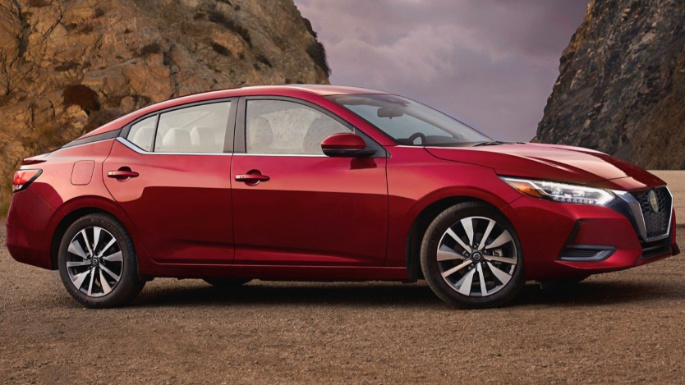 Also included is a tire pressure monitoring system with individual tire display and Easy-Fill Tire Alert, a feature we wish all cars would adopt. Once air begins flowing into the tire, the Sentra’s four-way flashers come on to confirm the airing up has started. When the tire hits the appropriate pressure level, the horn then chirps to let you know the tire has been properly inflated.If you continue to fill the tire with air, the horn honks more aggressively to indicate over-inflation. Once air is let out of the tire, the Sentra’s horn chirps once to indicate the correct pressure has been reached. Move your pressure gauge back into your garage tool kit – you won’t need it in your Sentra’s glovebox.

Base S models get standard cruise control, while SV and SR models come with intelligent cruise control that uses radar to maintain a safe following distance. SR models can also be upgraded to include a 360-degree camera system.

The 2021 Nissan Sentra received a five-star overall rating from the National Highway Traffic Safety Administration (NHTSA), and a Top Safety Pick rating from the Insurance Institute for Highway Safety (IIHS). 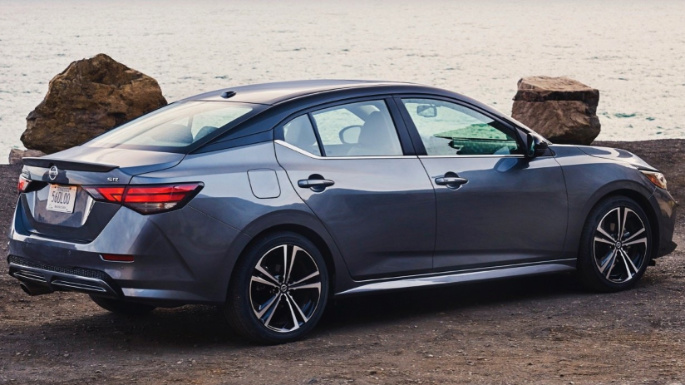 There was a time when the Nissan Sentra was an economy sedan you drove because you had no better option. It was a car that passed from owner to owner, bequeathed to a less-fortunate driver from one who was moving up the ladder. Those days are gone, and the Sentra is now a comfortable, grown-up compact sedan worthy of a place of pride in the driveway.

Sentra trim levels are very simple and straightforward. All Sentra models get the same 2.0-liter gasoline engine with a CVT and FWD. The S model starts at $19,410 MSRP. This is the base model, nicely equipped. The SV, upgrades some tech, adds rear disc brakes, and nicer interior materials, and starts at $20,470. Pricing for the top-of-the-line SR starts at $21,750. This model not only has the nicest interior appointment, but it also gets access to exclusive options, like NissanConnect and the around-view monitor, both desirable features.

If you’re a commuter and you’ve got extra room in your driveway, a 2021 Nissan Sentra would make a great addition. It is efficient, attractive, compact, and reliable. It would also make a great first new car for an aspiring young professional or graduate. With the way used car prices have risen in the past few years, a $20,000 new car makes even more sense.

While Sentra has ripened over the years, the competition hasn’t been sitting still. Sentra must be measured against the new Toyota Corolla (starting at $20,025), Honda Civic (starting at $21,250), Mazda3 (starting at $20,650), Hyundai Elantra (starting at $19,650), Kia Forte (starting at $17,890), and others. Even as crossover vehicles dominate sales, this highly competitive compact sedan slice of the market continues to percolate. If you buy a 2021 Nissan Sentra, you’ll get one of the best cars for the money, with features and capabilities you can live with for years.