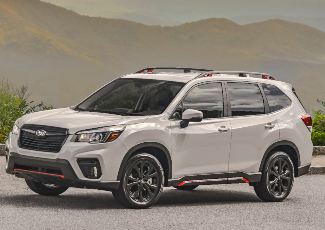 Subaru introduced the fifth-generation Forester at the New York International Auto Show in March 2018. While the exterior of the 2019 model was only marginally different from that of previous models, the focus of Subaru shifted instead to quieter and smoother performance.

The compact five-passenger, four-door SUV sports a more prominent grille and sharper sides but maintains the low beltline and tall windows of its predecessors. The wheelbase is longer, giving the Forester 1.4 inches more rear legroom, and the doors open to nearly 90 degrees to give passengers improved rear access.

Subaru continues to offer the Forester in Base, Premium, Limited, and Touring trim levels. The Touring and Limited versions come with a voice-controlled 8-inch touchscreen infotainment system and the Touring adds new heated rear seats.

A first-ever Sport trim joins the middle of the Forester lineup and features 18-inch wheels, standard X-Mode control and Hill Descent Control, which maintains a steady speed when coasting steep declines. All but the base trim levels now sport a panoramic moonroof, which stretches from above the front seats to the rear seats.

The Forester continues to use the 2.5-liter four-cylinder boxer engine of the previous generation. However, the new engine packs more horsepower (182 instead of 179) and comes with direct injection for better fuel economy.

For this generation, Subaru discontinued the 250-hp, 2.0-liter turbo engines and no longer offers a manual transmission. All models now come with a continuously variable automatic transmission (CVT). 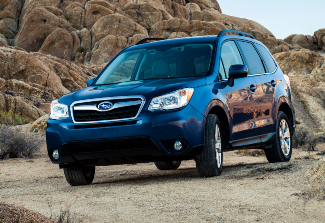 The Subaru Forester was fully redesigned for the 2014 model year.

This fourth-generation Forester grew in length over its predecessor by 1.4 inches; it's also 0.6 inches wider. Interior volume is also up; maximum cargo area increased to 74.7 cubic feet when seats were folded down. This model has more front seat travel and more rear seat legroom than previous generations.

Updates to the interior design were subtle, highlighted by a simple, modern dashboard design with large buttons and knobs for stereo and climate controls.

The most common model has a 170-hp, 2.5-liter, four-cylinder engine. It comes in base, Premium, Limited and Touring versions. The new 2.0XT trim offers a 250-hp, 2.0-liter turbocharged engine and is offered in Premium and Touring versions. Most Forester models came with a continuously variable transmission (CVT). On those that had the manual transmission, the number of gear was bumped to six from five. The X-Mode AWD control system, which Subaru designed for use on uneven or slippery roads, was available for some of the high-end models.

New safety features introduced for this generation included optional EyeSight Driver Assist Technology, which was designed to monitor traffic movement and warn drivers if they veered off their lanes. Other safety features in later model years included an optional forward-collision prevention and forward and reverse automatic braking.

The third-generation featured a major redesign that featured a less boxy exterior, characterized by a sloping roofline and softly rounded curves. With this transformation, the Forester became more of a small modern SUV than a rugged traditional wagon. The new design increased the wheelbase by 3.5 inches, and overall length, width and height by 3 inches, 1.8 inches, and 4.3 inches respectively. Second-generation models had a roomier interior and more cargo space. With the rear seats folded, cargo capacity was 69 cubic feet.

The trim levels offered in this generation were 2.5X, 2.5X Premium, 2.5X Limited, 2.5XT and 2.5XT Limited. A more powerful 170-hp, 2.5-liter four-cylinder engine became standard for the X trims. The XT version engines, which were turbocharged, delivered 224 hp. Turbo versions can be identified by their prominent hood scoop that's designed to direct air through the intercooler.

A 2013 mini-refresh made USB and Bluetooth audio input standard features in all models. Standard safety features that were standard for this generation included stability control, brake assist, and full side-curtain airbags. 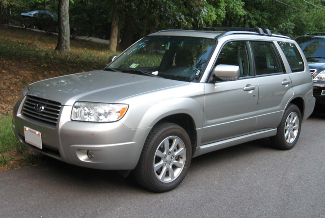 The second-generation Subaru Forester went on sale for the 2003 model year. It featured an updated design with a larger, boxy body, an enlarged chromed grille, new contoured bumpers above and redesigned halogen headlamps. The Forester also had flared fenders and an aluminum hood to shed weight.

This generation remained 175 inches long, but cargo space increased to as much as 64 cubic feet when the rear seats were folded.

The base trim of the previous generation was renamed X and the luxury S model was renamed XS. Both models featured a 165-hp, 2.5-liter four-cylinder engines. Subaru released the XT trim with a turbocharged 210-hp, 2.5-liter engine in 2004. It launched variants of these models in later years, including the XS Premium model and the XS L.L. Bean edition, which featured leather seats and a sunroof. Air conditioning and remote keyless entry became standard on all models.

Subaru updated the Forester slightly for the 2006 model year, boosting the output of the base engine to 173 hp and that of the turbo engine to 224 hp. Buyers could still choose between a manual or automatic transmission, and all-wheel drive became standard. 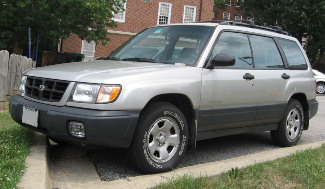 Subaru unveiled the Forester at the 1995 Tokyo Motor Show. The first-generation models, which went on sale in the US in 1997, were crossover SUVs with a front-engine, four-wheel drive layout. They used the Impreza platform but carried a larger 165-hp, 2.5-liter, four-cylinder engines of the Subaru Outback.

Although the first Foresters used a car-based body, they had the rugged, boxy look that would be the distinguishing characteristic of the next few generations. They were not designed as conventional SUVs, so they were close enough to the ground for easy access.

Early buyers of the Forester could choose between a four-speed automatic or a five-speed manual transmission. Trim levels started with the base L, which came with air conditioning, cruise control, and other standard features.

The rear seats folded forward to create a flat load floor and cargo capacity in the rear was 14.4 cubic feet.