A majority of car buyers would tolerate little to no delay in the delivery of their Tesla Model 3, according to a new survey by Autolist.

Last week, Tesla announced that its losses in the fourth quarter of 2017 were the highest in its history. The automaker also made it clear that it was facing additional delays in getting Model 3 production up to its weekly target of 5,000 vehicles.

To get a sense of what this means for consumers, Autolist surveyed 1,058 car shoppers in the days following Tesla’s earnings. The survey found that, in addition to the importance of meeting Model 3 delivery dates, consumers also valued the presence of CEO and co-founder Elon Musk and that the build quality of the Model 3 would have an impact on consumers’ decision to buy one.

Not important to car buyers? Tesla’s profitability—which most people falsely believe is a real thing—and the recent SpaceX launch that sent a Tesla Roadster into space.

It’s been a busy month for Musk’s Tesla and his SpaceX venture alike. On Feb. 6, SpaceX launched the Falcon Heavy rocket with a Tesla Roadster on board into orbit.

One day after that launch, Tesla posted a $675.4 million loss for Q4 of 2017, the largest such loss in the company’s history. 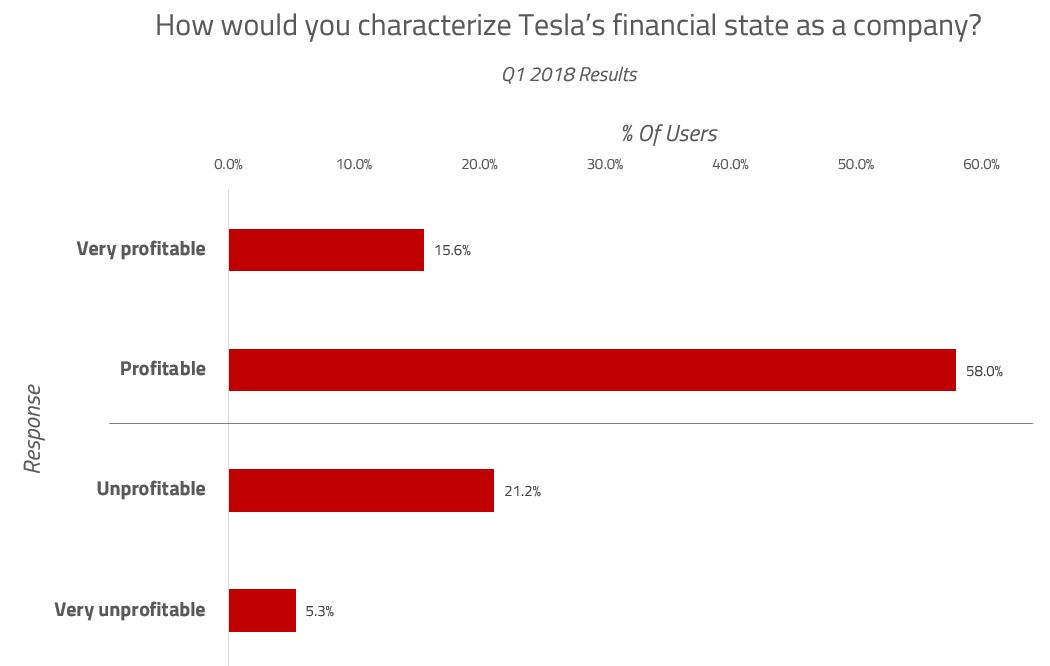 While that’s good news for Tesla, delays for the Model 3 are a growing concern. Right now, Tesla is hoping to build 5,000 Model 3s a week by the end of June, a deadline that’s been pushed back twice already and one which some analysts expect to be pushed back again.

Such delays would be a deal-breaker for many of the car shoppers that Autolist surveyed. 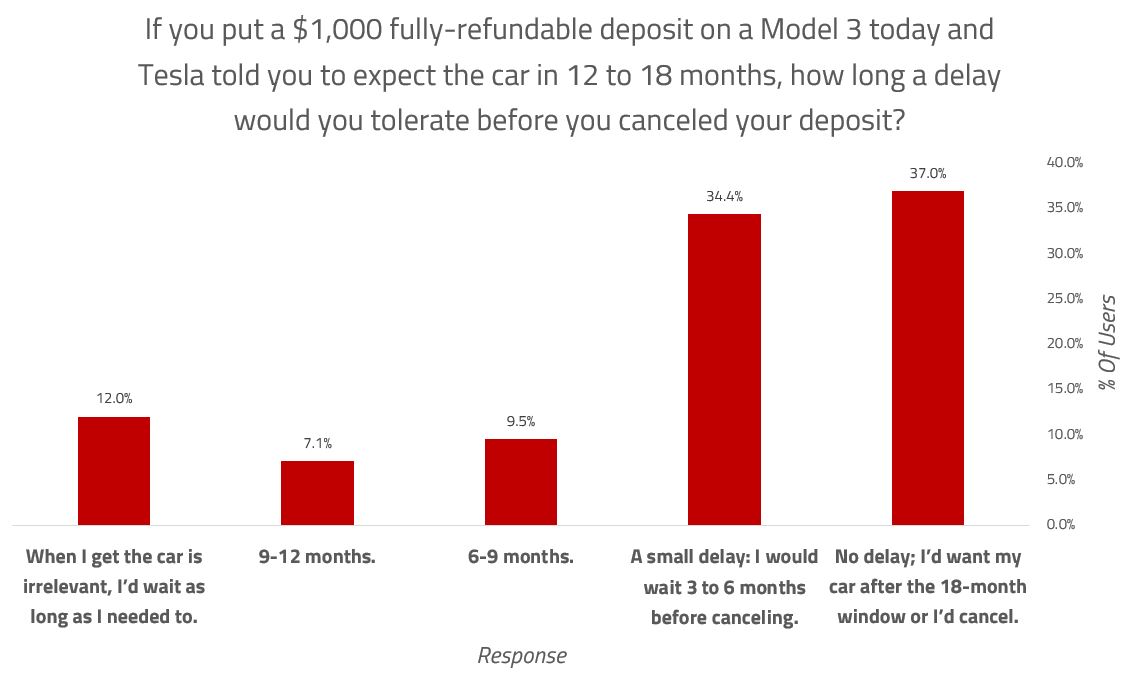 Notably, 72 percent of shoppers said that if they put down a deposit today on a Model 3—a car which Tesla currently says will take 12 to 18 months to deliver—those car shoppers would cancel their deposit if the car wasn’t delivered within six months after that delivery window.

The automaker has taken more than 450,000 fully-refundable, $1,000 deposits for the Model 3, a compact sedan that many believe is critical to the long-term viability of Tesla.

Not only are Model 3 delivery dates important to both consumers and Tesla’s bottom line, but so too is the build quality of these cars. 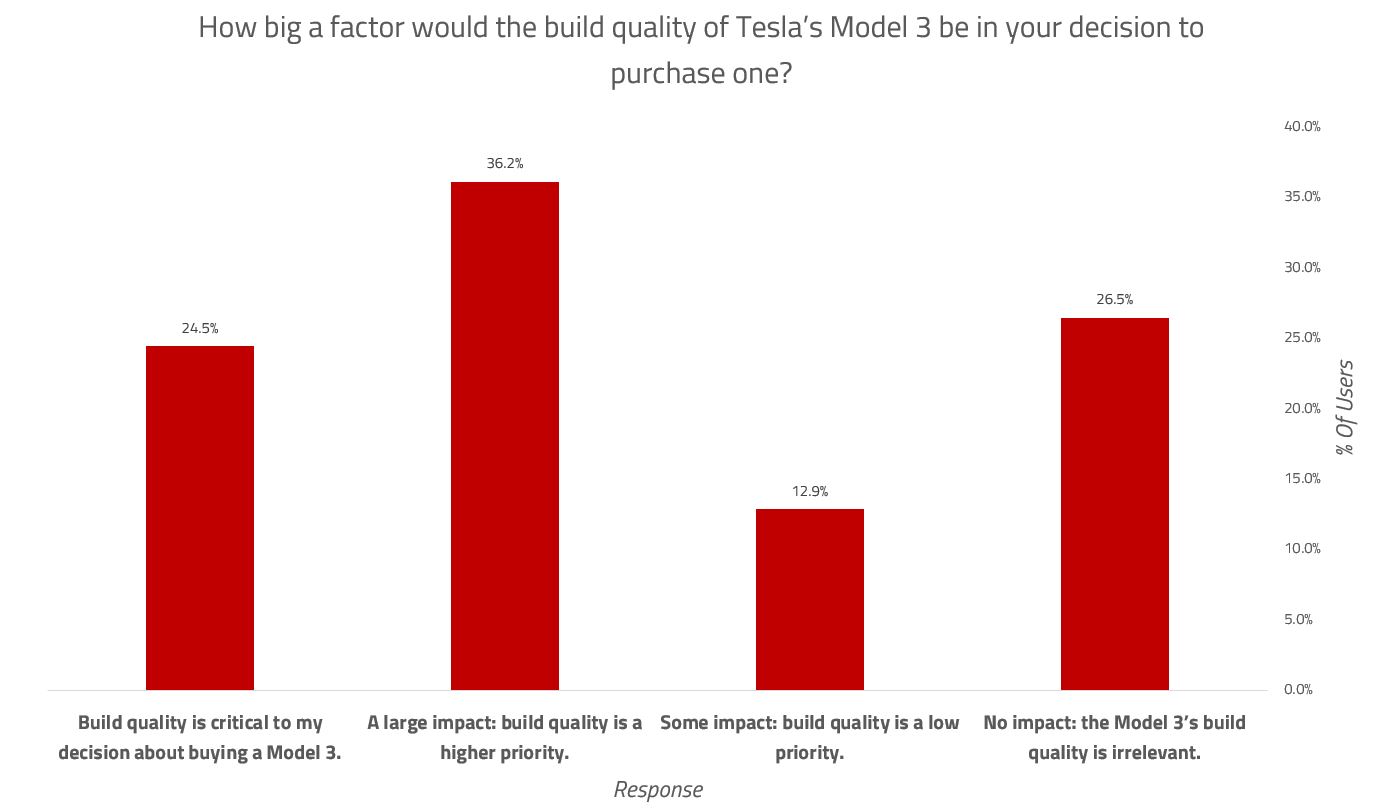 Seventy-four percent of car shoppers polled by Autolist said that the build quality of a Tesla Model 3 would have at least some impact on their decision to buy one.

Autolist’s numbers break down like so: 24 percent said build quality would be absolutely critical to their decision to buy a Model 3; 37 percent said it was a high priority in their purchase consideration and 13 percent said it would have some impact but was a lower priority to them than other facets of the car.

The remaining 26 percent of respondents said that the Model 3’s build quality was irrelevant to them.

In January, Tesla announced an all-or-nothing arrangement that would pay Musk tens of billions of dollars in Tesla shares if he and the company reach lofty goals over the next decade—or nothing at all if he doesn’t.

The move is likely to stem fears of Musk’s departure from Tesla—a move that some believe would send the automaker’s stock spiraling downward since many investors see Musk’s presence and Tesla’s success as inextricably linked. Consumers polled by Autolist tended to agree.

Fifty-eight percent of car shoppers said Musk’s hypothetical departure from Tesla would negatively affect their confidence in the company. 37 percent said it wouldn’t change their impression of the automaker at all. Five percent said it would improve their outlook on Tesla.

Less important to consumers was the Tesla Roadster currently in orbit.

Last week’s out-of-this-world publicity stunt with the Roadster strapped into a SpaceX Falcon Heavy rocket didn’t seem to move the needle for those Autolist polled.

Autolist previously explored Tesla’s role in the marketplace and found that its vehicles sell faster than other American car brands and that Teslas depreciate slower than their segment rivals. Even the Model 3 is projected to depreciate at a slower pace than its peers.

You can check out all of Autolist’s research here.