Vehicle Type: The Toyota Camry is a midsize sedan with seating for up to five people.

Powertrain: The 2017 Camry is offered with either a four-cylinder engine or a V6.

The four-cylinder is a 2.5-liter unit that produces 178 horsepower and 170 pound-feet of torque.

The Camry is also available as a hybrid, which uses a 2.5-liter four-cylinder and a 105 kW electric motor to produce 200 system horsepower.

Both gas powertrains are paired with a six-speed automatic transmission and paddle shifters, while the hybrid model gets a continuously variable transmission. 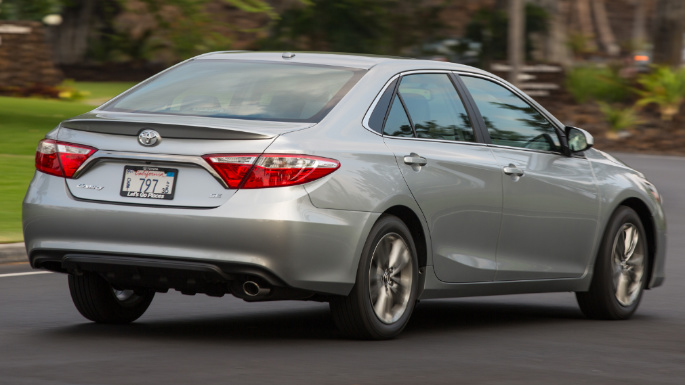 To say that the Toyota Camry is popular would be the understatement of the century. The segment-defining car has been a part of the Toyota lineup for decades, and has only gotten better as the years roll by. The current generation car debuted in 2011 and has seen a facelift since, but is nearing the end of its current lifecycle after a six model-year run.

With no notable updates for the new year, the 2017 Camry is a carryover, but it remains competitive against the Honda Accord, Nissan Altima, Ford Fusion, Mazda Mazda6, Hyundai Sonata, and Subaru Legacy. The Camry is aimed at new car buyers that want excellent predicted reliability, decent fuel economy, and a long list of standard features. Four trims are available for 2017: LE, XLE, SE, and XSE. The Hybrid is available in LE, SE, and XLE trims.

Two powertrains are available in the standard Camry for 2017: A 2.5-liter four-cylinder mill that produces 178 horsepower and 170 pound-feet of torque, and a 3.5-liter V6 with 268 horsepower and 248 pound-feet of torque. The Camry is also offered as a hybrid for 2017, which is powered by a 2.5-liter engine and electric motors that combine to produce 200 system horsepower. All gas-powered Camry models have a six-speed automatic gearbox, while hybrid models come with a continuously variable transmission. No matter the fuel type, the Camry is front-wheel drive only. 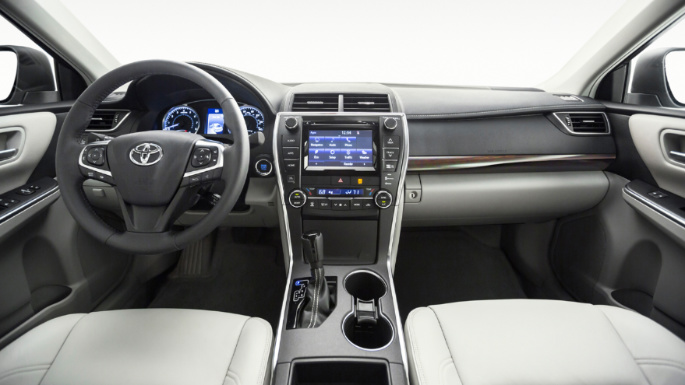 The 2017 Camry took top scores in crash tests performed by the Insurance Institute for Highway Safety (IIHS). The car was awarded a Top Safety Pick + designation by the ratings agency, which includes Good scores in all crashworthiness tests. The Camry’s headlights score anywhere from Acceptable to Poor, depending on the trim and configuration. Front vehicle-to-vehicle crash prevention was scored Advanced with optional equipment on board, and child seat LATCH system ease of use was rated Acceptable.

It is remarkable that the Camry managed its Top Safety Pick + designation in spite of the fact that all of the available advanced safety technologies are held back for the top XSE and XLE trim levels. These models get blind-spot monitors, rear cross-traffic alerts, a pre-collision system, adaptive cruise control, lane-departure warnings, and automatic high beams. 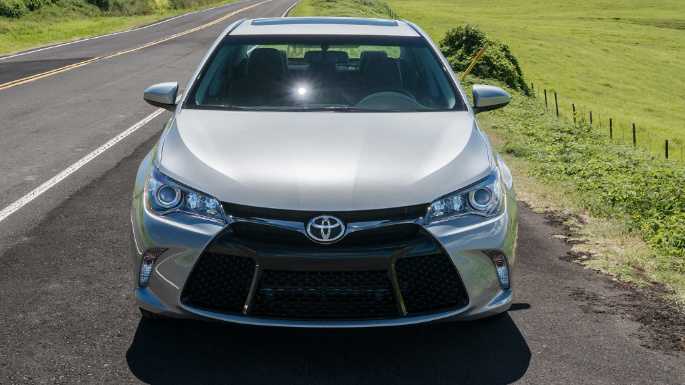 The Camry is offered in a simple but broad trim lineup that includes everything from a basic people carrier to a decked-out luxurious transporter. Though competition is fierce in its segment, the Toyota performs well because of its predicted reliability, strong feature set offering in each trim, and reasonable price tag.

At the top end of the model line, the Camry edges in on Lexus ES territory with its fit and finish and options offerings. That can make the maxed-out Camry a hard sell for some people, especially considering the Lexus brand’s reputation. For this reason, the mid-range SE and potentially the one step-up XSE models are the best choices in the Camry range. They bring many of the best features that the car can offer while keeping the price tag out of trouble with sub-luxury buyers.

The Camry’s flexibility and capability should put it high on any car shopper’s list. The V6 engine turns the car into a real rocket ship and gives it a sporting personality that previous years’ Camry models did not have. The hybrid model offers stellar fuel economy and a surprisingly normal driving experience that doesn’t feel alien or too futuristic. Not many other cars on the market today are able to span such a large variety of personalities. 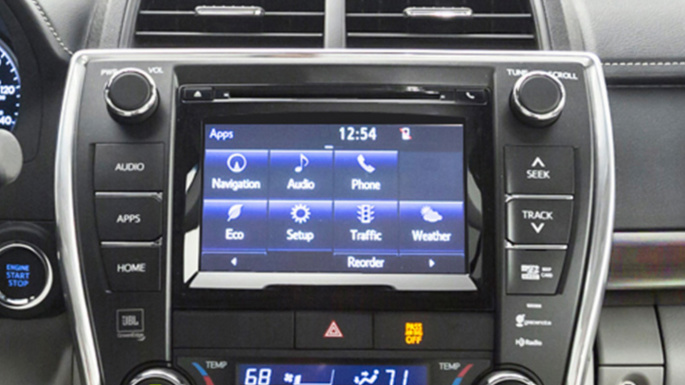 As much of its competition moves toward smoother and more intuitive infotainment systems with the burgeoning Apple CarPlay and Android Auto tech, Toyota has stuck with its Entune system, which is clunky, not very attractive, and hard to use when the car is in motion. The upside here is that phone connections with Bluetooth are very reliable, and can broadcast quite a bit of information into the display screen, but the system’s overall ease of use needs a massive overhaul to become competitive in the Camry’s segment. 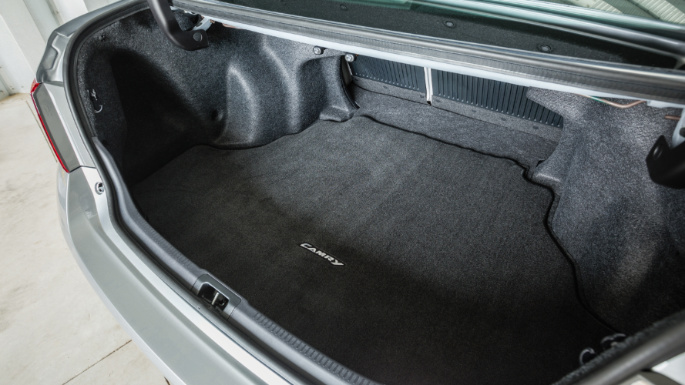 The Camry won’t wow with its interior specs, cavernous cargo space, or over-the-top passenger room, but its interior and storage areas are laid out in an intuitive way that makes the car ideal for road trips and kid hauling. There are large storage pockets in each door with bottle holders, a large center console storage space, several cleverly-placed cubbies and storage spaces, and an available wireless smartphone charger that can fit even the largest devices.

The Camry’s trunk measures 15.4 cubic feet, which is par for the course in the midsize sedan class, but the car has a wide opening that makes loading and unloading much easier. The low ride height also helps, as the load-in height is friendly for most people.

Despite the gas models’ middling fuel economy, all Camrys are efficient enough to travel long distances before needing a fill up. This makes them ideal for long road trips, where fewer stops is a huge benefit. 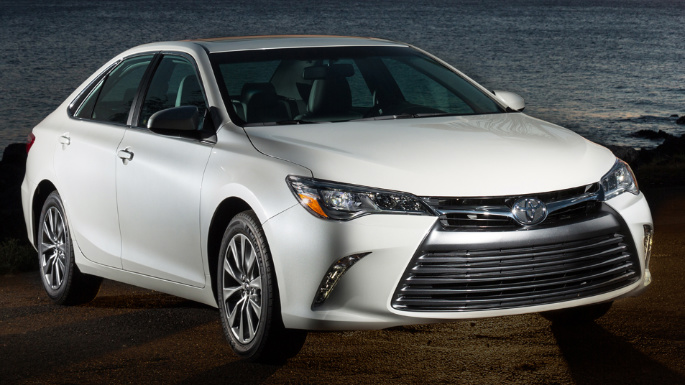 Toyota must be listening to the Camry’s critics, who for years have lambasted the car for being boring and having an appliance-like style that was neither offensive nor exciting. The middle-of-the-road Camry got a facelift for the 2015 model year that brought sharp lines and a more aggressive look. The update changed the car’s pedestrian style and brought a sporty profile to the previously anonymous Camry.

All versions of the Camry have cleverly thought out interiors that manage to balance form and function in a way that not many others can. Front seat comfort is spectacular, as the buckets are wide, deep, and feature a high level of adjustability, even for models with manual controls. The center stack features large buttons with clear labels and controls that are positioned to be easily reached by the driver. The car features small pillars and large windows that provide excellent outward visibility in nearly all angles.

The Camry’s cabin feels sturdy and well-built. The construction is solid, and features premium feeling materials that convey a sense of luxury, even in the lower trim levels. All panels and components are installed with tight tolerances, which means no squeaks, rattles, or creaking when the car is moving. This sets the Toyota apart in its crowded segment.

The car’s doors are large, but not too heavy. The door openings feature low step-in heights that make entry and exit a breeze. Parents will enjoy the ability to easily load children into and out of car seats. The car’s square door openings make it much easier to get a kid in and out without bumping heads, and the gently sloped roof leaves plenty of head room for children that are still riding in large full-size or rear-facing seats. 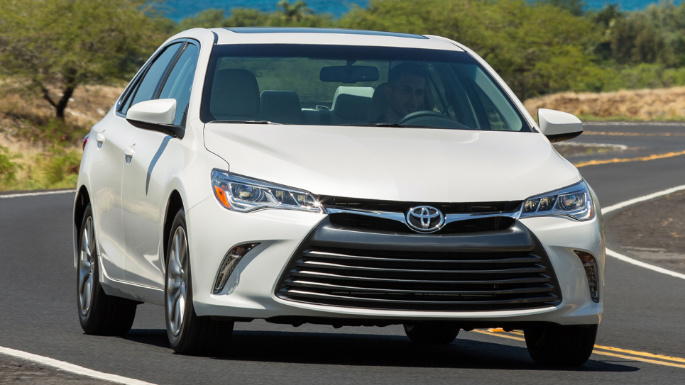 The Camry’s four-cylinder engine is more than adequate for all but the most demanding drivers. It’s got plenty of low-down “grunt” for scooting around town and makes moving through traffic a breeze. There’s a bit more noise than expected under heavy acceleration, but the four-cylinder does an admirable job at pushing the Camry to highway speeds and beyond.

With the V6 on board, the Camry is quicker than it needs to be, and is certainly sportier than most people would expect. The acceleration from 0-60 mph takes around six seconds, which isn’t remarkable by performance car standards, but it is almost shocking in a Camry, where the primary purpose for years has been quiet, reliable, smooth rides.

The Camry Hybrid’s performance is smooth and refined, and the 200 system horsepower is more than enough to get the car moving with gusto. Unlike some hybrids that have an awkward handoff between gas and electric drive modes, the Camry Hybrid makes the move seamlessly.

It is hard to call the Camry truly sporty, but it has a suspension system that keeps body roll in check while providing a comfortable ride in most situations. Steering is predictable and easy to live with, while providing a surprising level of feedback. Many sedans opt for an overly assisted power steering system that gives almost no feel of what’s going on underneath the car, but the Camry’s steering wheel is communicative enough to inspire confidence.

Braking is solid, taking around 130 feet to stop the car from a 60-mph run. 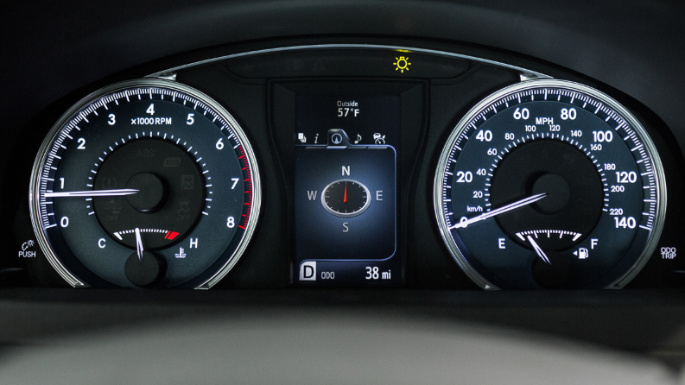 When equipped with the 2.5-liter engine, the Camry delivers EPA-estimated fuel economy of 24/33/27 mpg city/hwy/combined.

Both the hybrid and V6 Camry models deliver competitive fuel economy that make them ideal for frugal car buyers, but the standard four-cylinder Camry’s gas mileage is not as strong as comparable offerings from Honda and Nissan. 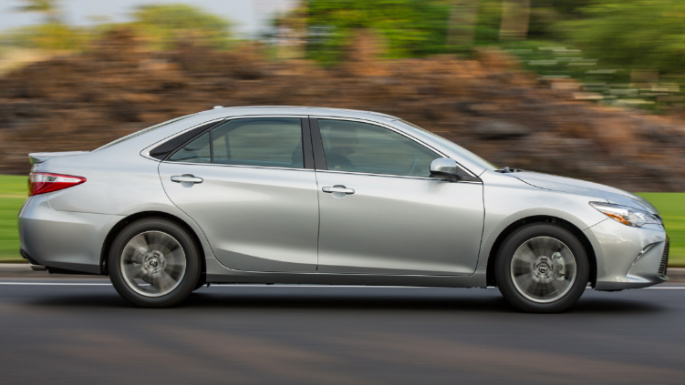 The Toyota Camry XLE has a starting price of $27,145 and comes with LED headlights, 17-inch wheels, a smart key system with push-button start, leather upholstery, and a power-adjustable passenger seat.

If we were shopping for a Camry today, we’d opt for any of the three hybrid models. The added gas mileage and range, combined with the reasonable price makes for a wonderful vehicle that is practical, comfortable, and well-equipped. The V6 Camry is tempting, especially for the added performance from the larger engine, but the extra cost might be off-putting for some buyers. The 2017 Camry has carryover pricing from 2016, so it’s refreshing to see a vehicle hold steady in a sea of rising costs.