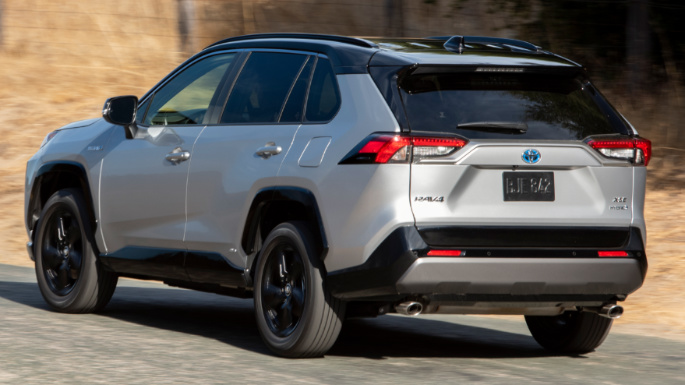 The Toyota RAV4 is a compact SUV and one of the most popular vehicles in its class, which includes vehicles such as the Ford Escape, Honda CR-V, Nissan Rogue, and Subaru Forester. One of the earliest vehicles in this segment, the RAV4 has developed a reputation for reliability and practicality, along with a large and loyal following.

The RAV4 redesigned for 2019, gaining interior space and a number of new variants. Aping Toyota’s line of 4x4s that includes the 4Runner and Tacoma, for 2020, the RAV4 TRD Off-Road model joins the lineup. It features the increased ground clearance of the Adventure trim level, as well as revised styling cues, modified shock absorbers, and 18-wheels with off-road tires.

For 2020, all RAV4 models now add Android Auto to the already standard Apple CarPlay and Amazon Alexa compatibility, while some previously optional equipment has been made standard.

Toyota is part of a small, but growing, field of automakers offering a hybrid powertrain on a compact SUV, for economy car-like fuel economy teamed with SUV versatility and all-wheel-drive traction. It also offers offroad-oriented models that promise better performance in the rough than the standard models.

Regardless, the RAV4 boasts one of the largest and most diverse lineups among compact SUVs. 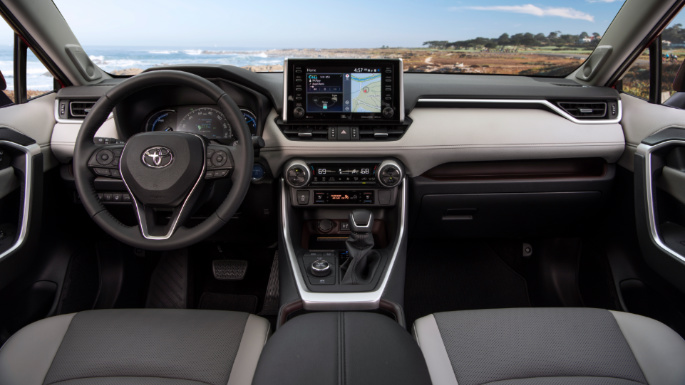 The RAV4 comes standard with an extensive list of driver assistance features, called Toyota Safety Sense 2.0. All models come with adaptive cruise control with forward-collision warning and automatic emergency braking, lane departure warning and assist, automatic high beams, and road sign recognition. Some models also get blind-spot monitoring and front and rear parking sensors with rear cross-traffic alert. While rivals from Ford, Honda, Subaru, among others, also make much of this equipment standard, many others still don’t. 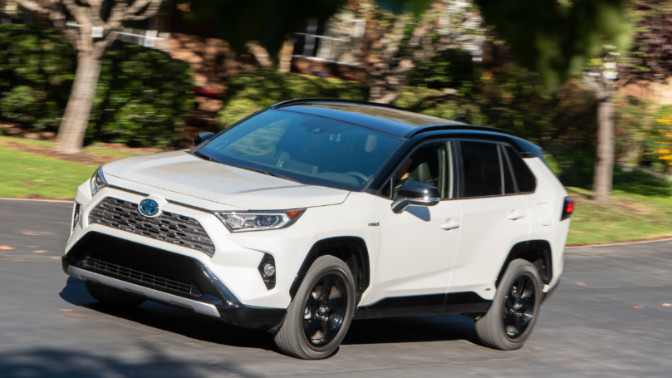 While the RAV4’s base price and standard equipment are competitive, higher grades get expensive quickly and approach the highest levels in the compact SUV class. And that’s before factoring in that, hybrid versions aside, the RAV4 doesn’t offer a more powerful engine option to rival the turbocharged Mazda CX-5 or V6-powered Jeep Cherokee, for example. And fully equipped versions of the Honda CR-V and Subaru Forester cost less than a top-tier RAV4.

The XLE Premium, at around $31,000 to start, is the least expensive way to get desirable items such as dual-zone automatic climate control and a power liftgate. The off-road-oriented models begin with the RAV4 Adventure at just over $34,000, which is about the same price as the more capable Jeep Cherokee Trailhawk. 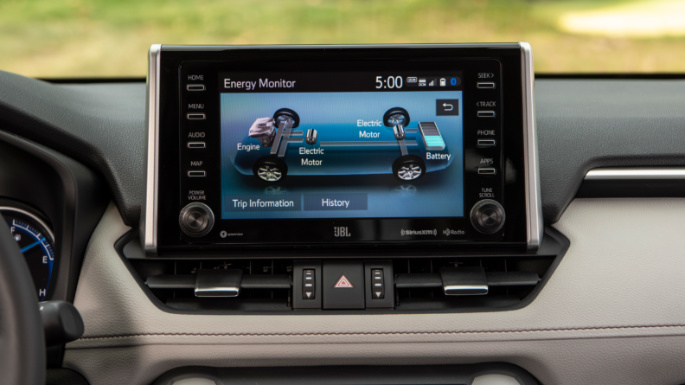 With the addition of Android Auto for 2020, the RAV4 is finally competitive in terms of in-car technology. All models get Android Auto, as well as Apple CarPlay now, which nearly all of its rivals include as standard now. A seven-inch touchscreen is standard on base-level cars, while higher trims can be upgraded with an eight-inch version, and an audio package includes a JBL sound system and built-in navigation. While relatively easy to use, Toyota’s infotainment system lacks the clarity and ease of use from systems found in Jeep models and the Chevrolet Equinox, and it’s not as responsive as that found in the Volkswagen Tiguan.

In addition to driver assistance technology, the RAV4 can be equipped with up to five USB ports, a 360-degree camera, and ventilated front seats. Also available is a digital rearview mirror, which is able to switch from being a traditional mirror to a camera projection of what’s behind the vehicle. No other vehicle in the RAV4’s class offers that feature, even if it’s likely to be most useful when towing a trailer, because all models come equipped with some form of a backup camera. 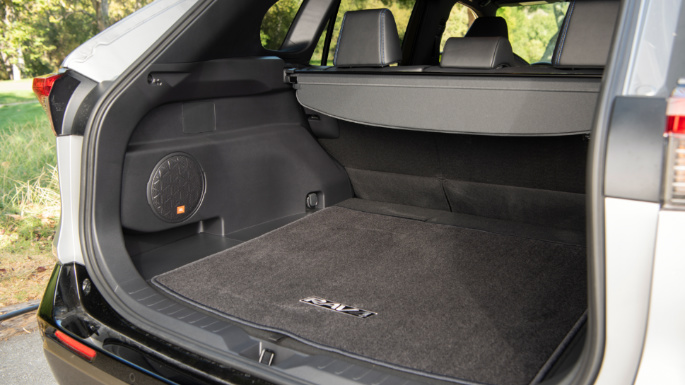 All RAV4 models benefit from a spacious cabin and highly usable cargo area, despite it being on the smaller side of its immediate rivals. Headroom and legroom for four adults are generous, even if five is a squeeze. Those installing car seats should find the process easy, thanks to rear doors that open wide. Cargo space is among the best in the class, although the Subaru Forester’s boxier and taller shape may provide more usable space than the slightly sloping rear end of the Toyota.

Only the three-row Volkswagen Tiguan and Mitsubishi Outlander offer more space for cargo and people, but those who regularly use three rows of seats in an SUV will be better served by a midsize crossover, rather than a compact. 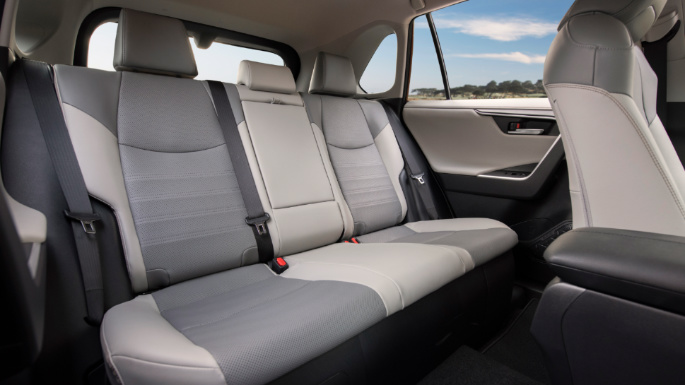 The RAV4 is also capable of towing a maximum of 3,500 pounds when properly equipped. That’s among the highest in the segment, save for the V6-powered Cherokee. Given its four-cylinder engine, however, it may not be the most pleasant towing experience. 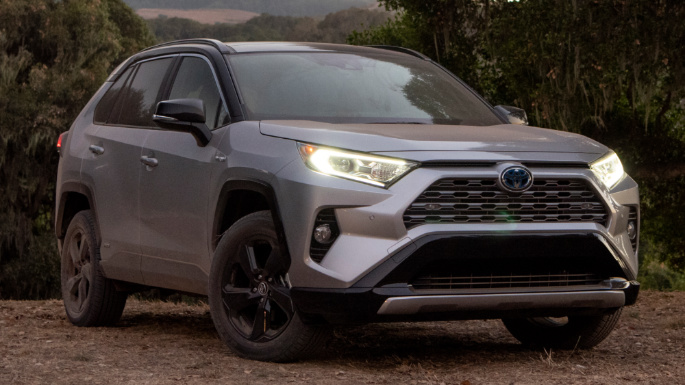 The RAV4 is essentially available in three appearances, with traditional models keeping a corporate Toyota look. LE models make do with standard steel wheels, while many other rivals now offer alloy wheels across the line. The XSE models have a sportier appearance, while the Adventure and TRD get a rugged look. It’s a matter of preference, but at least Toyota offers distinct choices between trims, something most vehicles in the segment do not offer. If anything, the off-road-oriented variants of the RAV4 stand out most in this class. All versions, at least, offer an excellent glass area for good outward visibility. 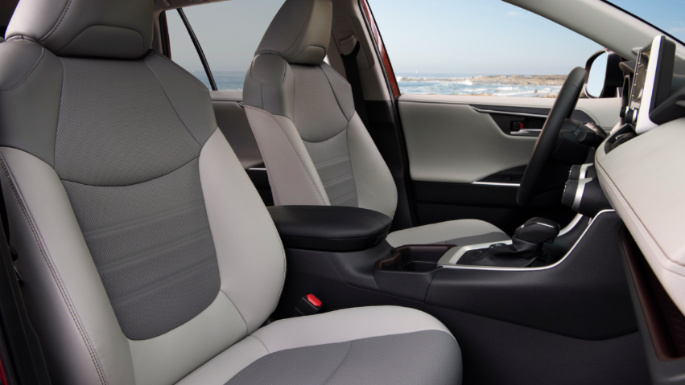 The interior design is sound and quality of materials satisfactory for the class. The touchscreen is mounted high for good visibility, while several physical knobs and buttons make adjustments easy while driving. Base models, however, have some lower-rent fabrics. And all versions lack the visual panache of the Mazda CX-5 or the higher quality plastics in a VW Tiguan. 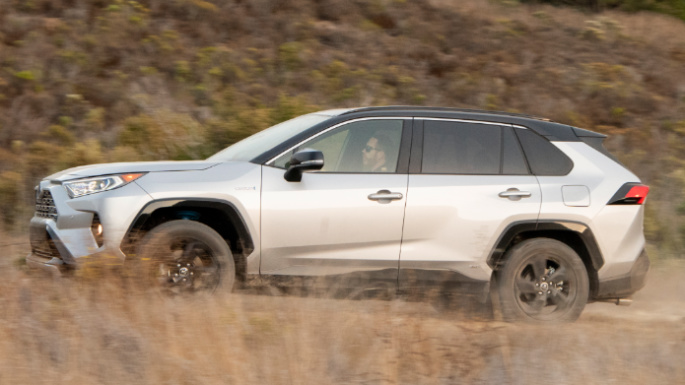 The 2.5-liter four-cylinder engine provides adequate performance, but not much more. While its 202 horsepower rating is somewhat higher than the standard engines offered in many rivals, it’s less responsive than models with standard turbocharged engines. The transmission also works hard to tap into that power, and engine noise levels are higher than expected. The hybrid powertrain is more responsive and quieter in certain conditions.
Steering and handling are also off from the best-in-class, and generally make the RAV4 drive larger than it is. The all-wheel-drive system in Adventure and TRD Off-Road models can at least be programmed for different terrain surfaces and conditions while switching to two-wheel-drive mode when four-wheel traction isn’t needed. It offers better-than-expected off-road performance, and more than most drivers will likely need.

The 2020 Toyota RAV4 2.5-liter gasoline is rated by the EPA at 28 mpg city, 35 highway, and 30 mpg combined. All-wheel-drive LE models fall one mpg in city and highway, while all other all-wheel-drive models drop between 2 and 3 mpg highway compared to the standard model.

All of the RAV4’s EPA estimates are near or at the top of the class. The Ford Escape and Honda CR-V front-drive models come closest to the RAV4.

Both the Ford and Honda are also available as hybrid variants, but only the Ford’s front-drive hybrid edges the Toyota. Compared to other gasoline models, the RAV4 boasts better EPA figures than many subcompact SUVs, which is worth considering if fuel economy is a priority.

The LE Hybrid includes all-wheel-drive, as well as 17-inch alloy wheels, dual-zone automatic climate control, and hybrid-specific instrument panel readouts. Blind-spot monitoring and a cargo cover are the only options.

The LE Hybrid starts at $28,350 before destination.

The Weather, Convenience, and JBL Audio packages are optional.

The Limited Hybrid starts at $36,880 and gets 18-inch wheels and projector-beam headlights with optional adaptive beams.

At around $31,000, the XLE all-wheel-drive and XLE Hybrid with the Convenience Package are the best bets, providing essential features and a few desirable extras. Most of the RAV4’s rivals come well-equipped for a similar price.

For off-road enthusiasts, the Adventure model is likely the best choice, as the new TRD Off-Road can get expensive.