Vehicle Type: The 2022 Toyota RAV4 is a compact crossover SUV that can seat up to five passengers.

Powertrain: The 2.5-liter four-cylinder engine from 2021, producing 203 horsepower and 184 lb-ft of torque, is expected to be carried over into 2022 along with its 8-speed automatic transmission.

Would we buy one? Yes! The RAV4 offers most things that most buyers are looking for in a compact crossover SUV. 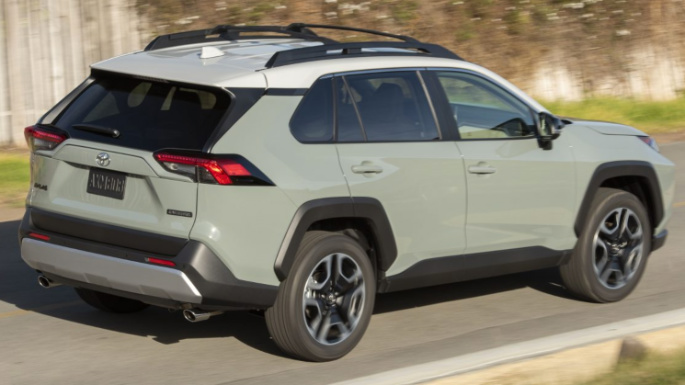 The Toyota RAV4 is a compact crossover SUV that is currently in its fifth generation of production. It was fully redesigned in 2019, and even though reviewers do not expect many changes for the 2022 model year, it has remained relatively fresh in the crowded small SUV segment because of its edgy design, a wide range of trim levels, and value.

It competes with the likes of the Honda CR-V, Subaru Forester, Nissan Rogue, Mazda CX-5, Hyundai Tucson, Kia Sportage, Jeep Cherokee, and Ford Escape. The RAV4 scores some of the best marks in the class for safety and fuel efficiency, and although it has a good interior, good cargo capacity, a comfortable overall ride, and decent handling, its combination of all these elements have elevated it to be the best-selling crossover SUV in the United States.

Sources speculate that on top of some slight trim level shifting and a potentially light styling refresh, an infotainment system update with a larger touchscreen will make an appearance on the 2022 RAV4.

All RAV4 models share the same 2.5-liter engine producing 203 horsepower and 184 lb-ft of torque. It is mated to an 8-speed automatic and sends power to the front wheels on most trim levels. All-wheel-drive is optional on all trim levels, and it comes standard on both the TRD Off-Road and Adventure trims.

Buyers who want a more economical choice can have either the Toyota RAV4 Hybrid or Toyota RAV4 Prime – a plug-in hybrid. Both utilize the same 2.5-liter engine as the regular RAV4 but both benefit from the addition of electric motors, giving each a boost in horsepower. Going with either hybrid option will up the pricing by a few thousand dollars from the regular model. 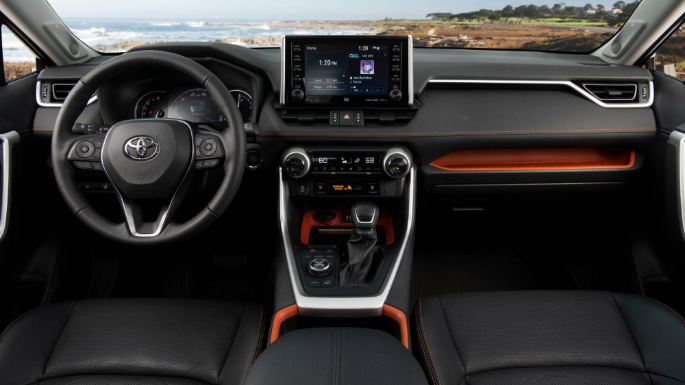 The NHTSA has given the 2022 Toyota RAV4 a five-star overall safety rating. It has earned four out of a possible five stars in both its front driver side and rollover resistance ratings. All other crash-test areas resulted in five-star ratings. The IIHS has not yet rated the 2022 RAV4, but the 2021 RAV4 earned a Top Safety Pick award.

Safety features like blind-spot monitoring, parking assist with automatic braking, and rear cross-traffic alert are standard on higher trim levels while a bird’s eye 360-degree camera is optional, even on the highest trim levels. 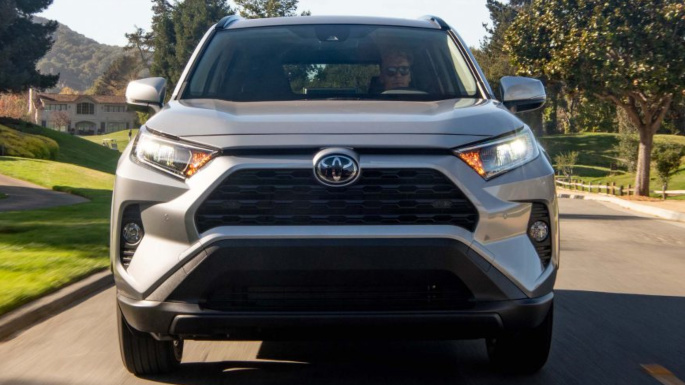 Most reviewers agree that the Honda CR-V is one of the better value propositions in the class with its spacious interior, good fuel economy, great ride quality, stylish exterior, better overall performance, and middle-of-the-class starting MSRP of under $26,000. Comparatively, the RAV4 offers less value upfront since its starting MSRP is a bit higher than its most worthy competitor.

Despite its higher overall pricing than many competitors, less cargo capacity than the class-leading CR-V, decent performance, and lower overall reviewer ratings than competitors like the Subaru Forester, Mazda CX-5, and newly-redesigned Hyundai Tucson, the RAV4 does not lack sorely in any area. It also retains its value well and has high year-over-year reliability ratings compared to others in the class, giving it a point back for value.

Additionally, it earns top marks for having a diverse set of trim levels from which to choose and many standard safety features that some other competitors lack, an important factor for car buyers who need a safe and efficient family vehicle. 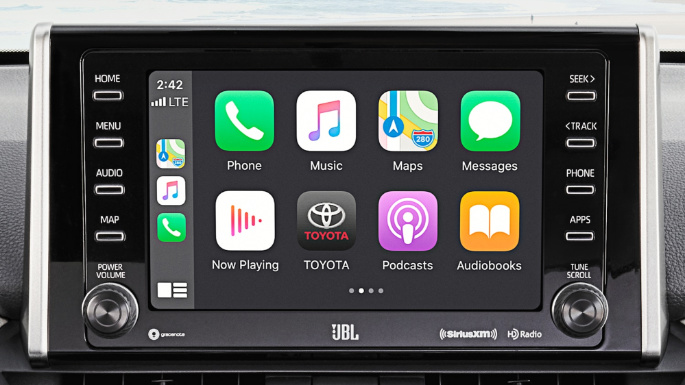 With the potential infotainment system upgrades to the 2022 Toyota RAV4 on the table, it earns some additional tech points, even though reviewers agree that the current infotainment system is already quite easy to use and intuitive. Projected changes include the possibility of the standard 7 or 8-inch touchscreen unit to be replaced with the 9-inch touchscreen found in the current 2021 RAV4 Prime, or even the larger 9.8-touchscreen from the Lexus NX. 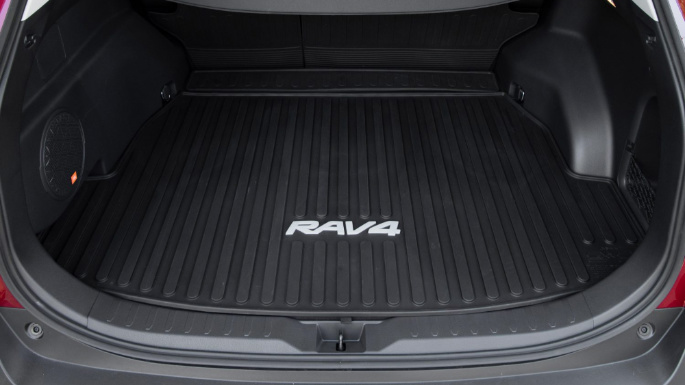 The 2022 Toyota RAV4 features a comfortable and spacious interior, seating for five, LATCH child-seat connectors, 37.6 cubic feet of space with the rear seats in place, and nearly 70 cubic feet of cargo space when the 40/60 split rear seats are folded flat. The RAV4’s cargo capacity loses out to the superiorly-spacious CR-V but beats out the Mazda CX-5 handily, offering better-than-average overall cargo capacity for the class.

Entry into the front or rear seats of the vehicle is uneventful, and once inside, there is ample headroom and legroom in the front and back for at least four regular-sized adults. The middle seat is better reserved for smaller people at max capacity. Plenty of storage cubbies and cupholders allow for extra storage of many smaller items and drinks. 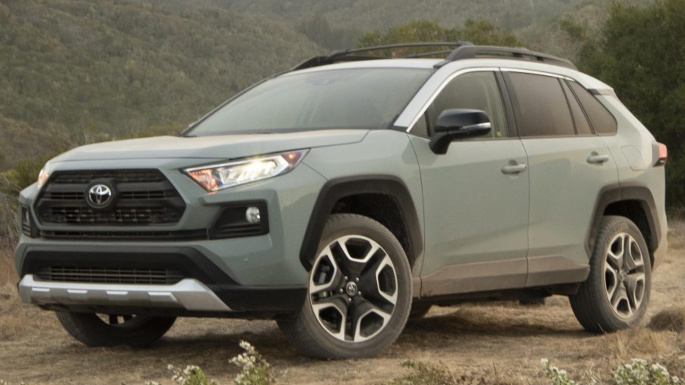 The fifth generation of the RAV4 was redesigned to look less “cute” than the previous generations. It has evolved into a sharp, angular, and somewhat polarizing design example within the class meant to emulate the more rugged Toyota 4Runner. Even on the base model, black molding travels the lower extremities of the crossover to give it a more serious and sturdy appearance.

Higher trim levels like the Adventure and Off-Road trims add sporty and rugged elements like the “floating roof” design and black wheels, both popular design elements for SUVs like this in today’s market. The more luxury-oriented Limited trim is much subtler and displays brighter and more well-connected exterior elements to show its own intentions.

The interior has a comfortable, thoughtful, and familiar design. The use of well-made buttons and knobs impresses reviewers with their sturdiness and build quality. Additionally, the interior is covered with well-made, soft-touch materials where it counts and all the controls are easily accessible to both passenger and driver.

Despite only offering a manually-operated front passenger seat – a popular gripe among testers – the seats are praised by reviewers for being comfortable and well-cushioned, regardless of whether they choose the front or the back. 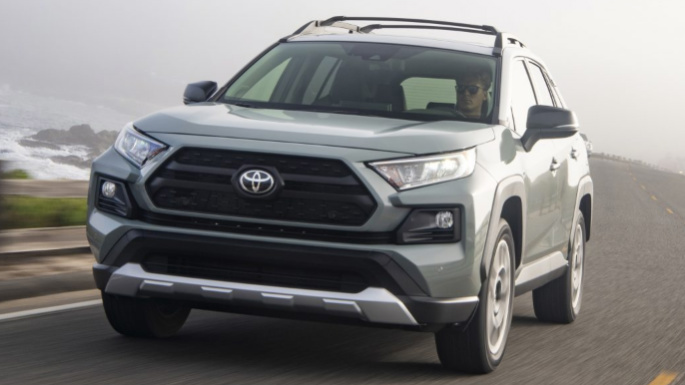 If reviewers only have one criticism of the Toyota RAV4, it probably has to do with the powertrain. Most agree that its 203-horsepower output is adequate but that it can also be noisy and feels unrefined. Some reviewers also note that the transmission is smooth most of the time but also has some unexpected shifts during anything more than normal driving.

Both acceleration and braking are said to be well-balanced, both being more than ample for most buyers’ everyday driving needs. Most reviewers are also surprised by its nimble handling and poise through corners. Coupled with its good braking and acceleration, many have found the RAV4 to provide an engaging driving experience for its size and family tree.

Comfort is also a high point of the driving experience. Though most reviewers agree that it is not as comfortable as the Honda CR-V, it is more forgiving than the sportier Mazda CX-5 without sacrificing some of the surprise zest it possesses in the handling department. Overall, testers note that it provides everything most buyers need and a little more fun on top of that. 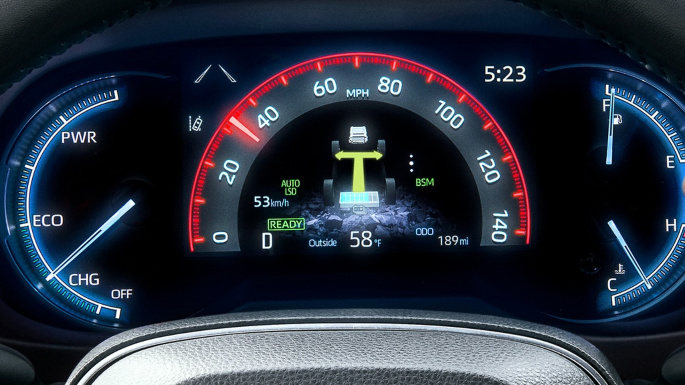 Especially in its base trim, these estimates are among the best-in-class. Even with all-wheel-drive equipped, the RAV4 competes alongside the CR-V for the top spot, bettering the Nissan Rogue, Hyundai Tucson, and Ford Escape. 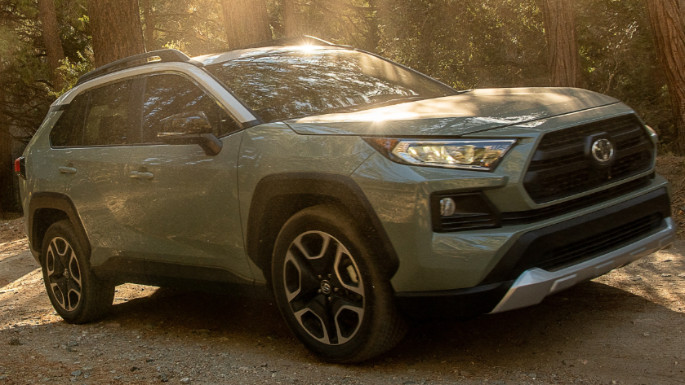 The RAV4 carries a starting price of just over $27,500 with the destination fee included. For that price, the LE base trim comes standard with 17-inch steel wheels, multi-LED headlights, Apple CarPlay and Android Auto connectivity, cloth upholstery, remote keyless entry, a six-stereo speaker system, and a potentially larger touchscreen and upgraded infotainment system.

Stepping up to the RAV4 XLE – starting at $28,860 with destination fee – will get buyers 17-inch alloy wheels, a power-adjustable driver’s seat, dual-zone climate control, fog lights, and push-button start. Additionally, blind-spot monitoring and rear cross-traffic alert, both options on the lower LE trim, both come standard on XLE models.

The RAV4 XLE Premium adds 19-inch alloy wheels, synthetic leather upholstery, a moonroof, a power liftgate, and a leather-wrapped steering wheel to the standard features list of the XLE at a cost of $31,565, including the destination fee.

RAV4 Adventure starts at $34,670 with the destination fee included. This trim benefits from an advanced all-wheel-drive system, a terrain model system, five interior USB ports, a rear 120-volt electrical outlet, and unique exterior accents. The 2021 RAV4 Adventure also receives a larger 8-inch touchscreen from the 7-inch touchscreen on LE, XLE, and XLE Premium models. Both the XLE Premium’s moonroof and power liftgate are eliminated as standard on the Adventure.

The Toyota RAV4 Limited is the luxury-oriented trim level of the group and starts at $36,095 with the destination fee. It includes amenities like a power-adjustable driver seat with memory function, an 11-speaker JBL Audio system, heated front seats, and a digital rearview mirror. Front and rear parking sensors with automatic braking are also included.

The Toyota RAV4 TRD Off-Road is the most expensive non-hybrid trim level, coming in at $37,295 with the destination fee included. It comes with the standard features of the Adventure trim with tuned MacPherson suspension, 18-inch alloy wheels, LED foglights, Falken all-terrain tires, and a skid plate. The moonroof and power liftgate left off of the Adventure is also put back into the standard features lineup.

Most buyers will likely benefit the most from purchasing the Toyota RAV4 XLE since it includes quite a few more features than the base LE trim, offers additional safety feature options if desired, and does not step up in price quite as much as the XLE Premium does from the XLE for just a few more extras.