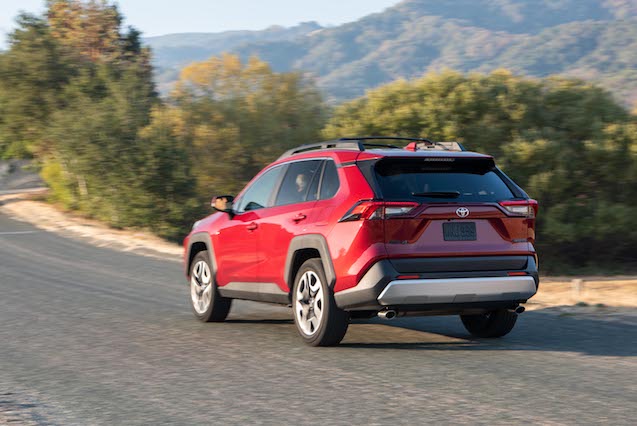 Toyota’s RAV4 is a compact CUV that is one of the pioneers of the car-based crossover segment. It’s larger than the subcompact C-HR and smaller than the Highlander three-row crossover. It’s also much different than Toyota’s truck-based 4Runner SUV.

An all-new fifth-generation RAV4 was introduced for the 2019 model year.

This model comes with either a gas engine or a hybrid powertrain.

This review focuses on the gas model, which uses a 2.5-liter four-cylinder engine that makes 203 horsepower and 184 pound-feet of torque. It’s paired with an eight-speed automatic transmission on all models.

That AWD system that's standard on the Adventure and optional on the top-end Limited trim is a more sophisticated setup than is available on lesser RAV4 models and it includes torque vectoring.

All models with either of the available AWD systems also come with a terrain-select feature with mud/sand, rock/dirt and snow modes.

The RAV4 Hybrid uses an electric motor and a 2.5-liter gas engine for a combined 219 horsepower.

There are five trim levels on the new RAV4: LE, XLE, XLE Premium, Adventure and Limited. A new TRD Off-Road trim level will join the RAV4 lineup in 2020.

Tough stuff. Whereas the styling on the four previous generations of the RAV4 was never particularly memorable or noteworthy, this new generation amps up the ruggedness inside and out. The interior is a savvy blend of function, refinement and comfort (though our Adventure test model had odd orange trim pieces). The outside takes a page from Subaru’s design handbook by going for the outdoorsy, capable look. It works all around. 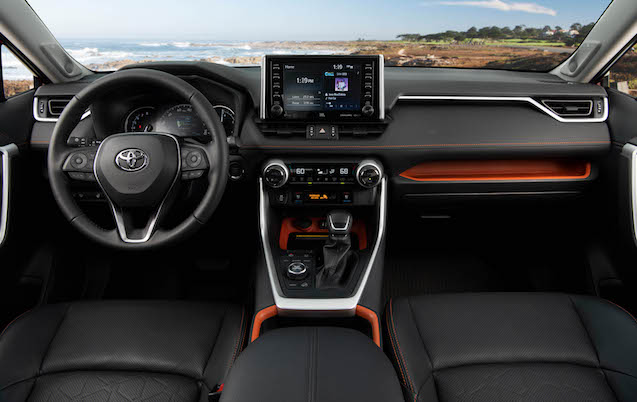 Good bones. This new generation of RAV4 is built on a new platform that Toyota uses on a variety of its latest vehicles. This lends a refined, quiet character to the RAV4 while also boosting its handling and safety chops.

Practicality abound. The inside of the RAV4 shows that Toyota took its time to figure out how people use their crossovers for daily life. The seats are comfortable (and the ones in the rear fold completely flat), the ergonomics of the dashboard are excellent, there’s plenty of space for five tall adults to ride in comfort (a flat floor in the back seat helps) and there are storage cubbies, cupholders and pockets galore. Plus a healthy amount of cargo room in the back.

Finicky transmission. Modern automatic transmissions have sophisticated programming that makes sure they’re always in the right gear to maximize fuel efficiency. The good ones do this seamlessly. Unfortunately, the one in this RAV4 isn’t great. It seems to always be hunting for the right gear and it shifted too often in that search. Many of the RAV4’s rivals don’t have this issue.

Stiff suspension. The handling on our RAV4 Adventure test model was fine but the suspension was oddly stiff for our taste. It lent a slightly cheap feel to the ride quality of the RAV4, which was otherwise solid. 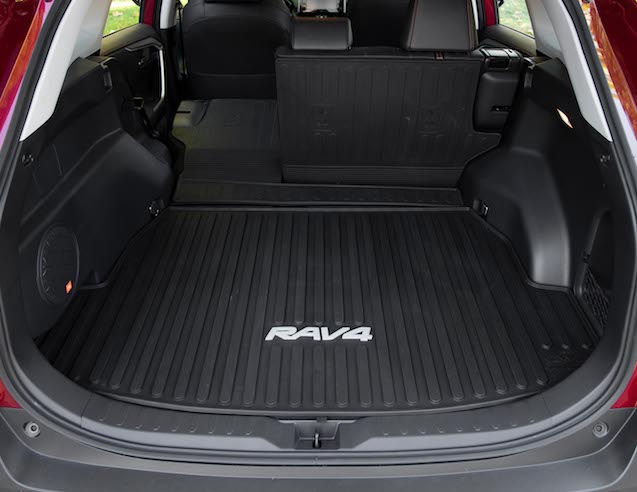 Cheap trunk. While the materials used throughout most of the RAV4’s interior were durable and high-quality, the plastics that Toyota used in the cargo area seemed cut-rate and cheap. This may seem like an odd thing to gripe about but the cargo space is the part of the interior that gets the most abuse. Cheap plastics like these don’t seem like they’re up to the task of withstanding decades of abuse. 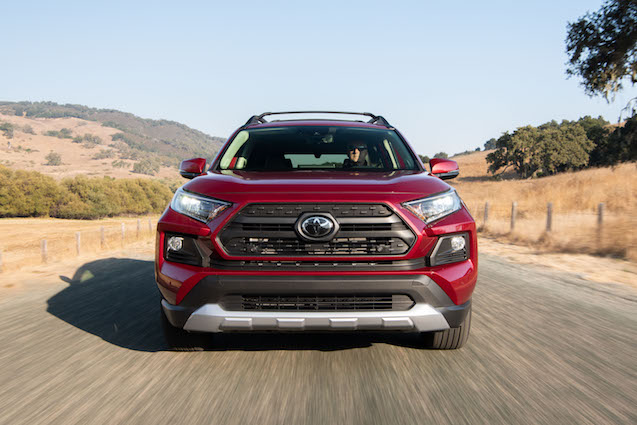 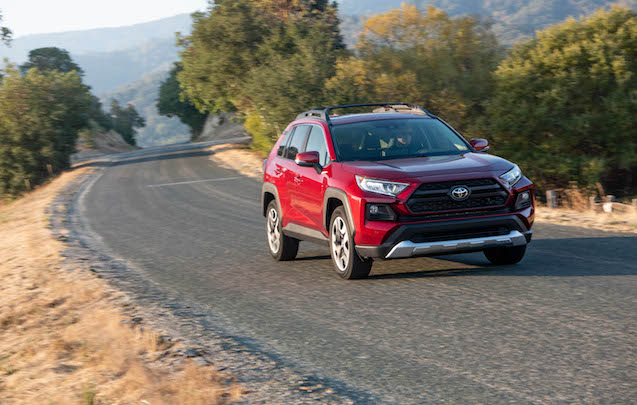 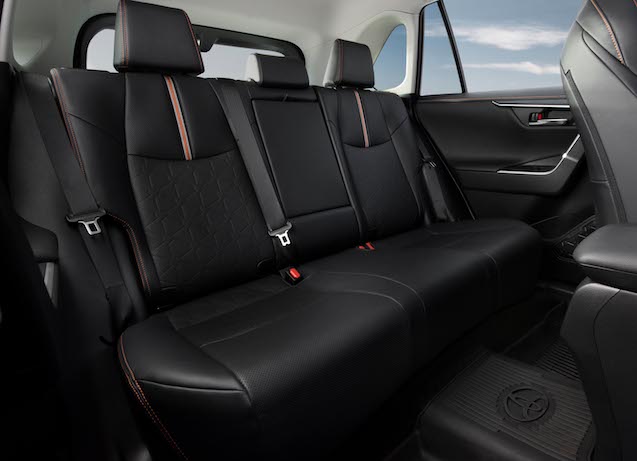 The XLE Premium starts at $30,595 and adds 19-inch alloy wheels, power tailgate, faux-leather seats and a leather-wrapped steering wheel and shift lever. This is the model we’d choose if it were our money: regardless of whether you add AWD, it’s a great mix of value, safety, comfort and amenities.

The aforementioned models all come standard with front-wheel-drive; AWD is a $1,400 option on each.

The more rugged Adventure model is next in the lineup, starting at $33,995 (this was the model we tested). It adds its sophisticated AWD system as standard plus unique 19-inch alloy wheels, exterior trim upgrades like bigger fender flares, silver-painted trim, active grille shutters for improved fuel economy, panoramic backup camera, customizable digital instrument panel with seven-inch display screen, orange trim pieces on the faux-leather seats and dashboard and a larger eight-inch touchscreen for the infotainment. 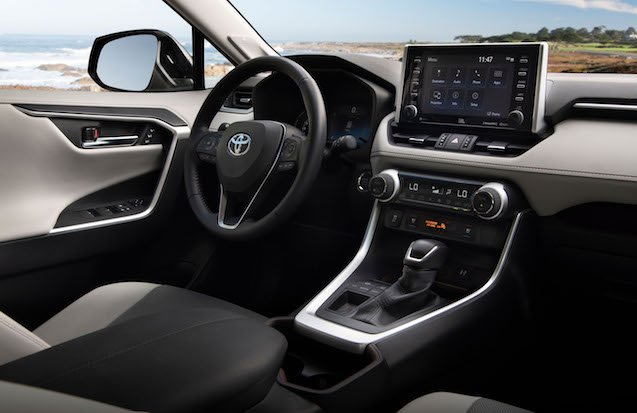 The luxury-oriented Limited model, seen above, starts at $34,595. It comes with some unique exterior trim (like a dark grey grille and trim pieces), puddle lights, chrome-accented door handles, heated front seats, digital rearview mirror and a navigation system with POI search and voice recognition. Note that AWD isn’t standard on the Limited, it’s a $1,400 upcharge like all of the non-Adventure models.

Finally, a new TRD Off-Road model has been introduced for the 2020 model year. It will add burlier tires and wheels, a rugged suspension with increased ground clearance and unique interior and exterior trim that denotes its off-road inclinations.

The RAV4 is in one of the most popular segments in the entire industry: compact crossovers. So this means there will always be plenty of competition.

Our overall favorite would be Honda’s CR-V; this crossover does everything very well and suits the needs of a huge group of buyers – including you. Until now, the CR-V has been the clear leader of the segment but this new RAV4 does give it a run for its money. Which is best comes down to your personal preference.

Subaru’s Forester is another well-rounded winner in this segment that is definitely worth a look.

We also love the Mazda CX-5 for its exceptional styling, refinement and handling.