Powertrain: A 255 horsepower, turbocharged 2.0-liter four-cylinder with an eight-speed automatic transmission and rear-wheel-drive.

A 3.0-liter inline six-cylinder with 382 horsepower, an eight-speed automatic transmission, and rear-wheel-drive. 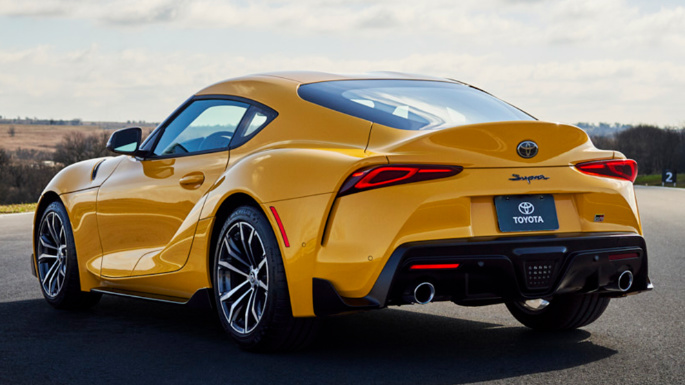 The new, fifth-generation Toyota Supra has big shoes to fill. Launched for 2020, it's a follow-up to the company's high-performance sports car last seen in the US market in 1998. This new generation was developed in cooperation with BMW, is built in Austria, and shares engine, transmission, and many interior components with the BMW Z4.

But the new Supra gives Toyota something it hasn't had since the last model departed the US in the '90s: a serious sports car. While the less-expensive Toyota 86 has carried the sporty coupe mantle for the brand, it's been derided for its lack of power. The Supra more than compensates, now with two engine choices and up to 382 horsepower. Coupled with an aggressively track-ready chassis and all of the high-performance components necessary of a sports car, the new Supra gives the undeniably practical Toyota brand a renewed performance credibility in the US. And a reason for new customers to visit its showrooms populated by Camrys and RAV4s.

Rivals for the Toyota Supra include the Chevrolet Camaro, Ford Mustang, BMW Z4, and Porsche 718 Cayman.

The 2021 Supra has a few changes over the inaugural model, notably more power on-tap for the turbocharged six-cylinder 3.0 models. The introduction of a less expensive and less powerful 2.0 model powered by a turbocharged four-cylinder engine. The 3.0 now produces 382 horsepower, up from last year's 355.

There are two higher trims in addition to the 2.0 and 3.0 models, the 3.0 Premium and A91 Edition. There are a few performance improvements under their sleek sports car shapes, and a host of styling and luxury enhancements, such as carbon fiber exterior mirror caps, carbon fiber interior trim, racing stripes, and black-painted wheels. 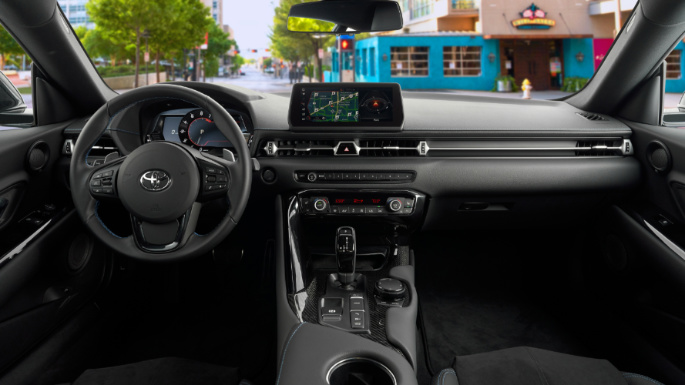 The $3,485 Safety and Technology Package for the 2.0 and 3.0 models features all of the driver assistance technology offered in the Driver Assist Package and traffic sign information, real-time traffic information, stolen vehicle traffic and recovery, and an emergency calling system.

The 2021 Toyota Supra has not been rated by the National Highway Transportation Safety Administration (NHTSA) or the Insurance Institute for Highway Safety (IIHS). However, it's unusual for these agencies to test specialty vehicles such as the Supra. 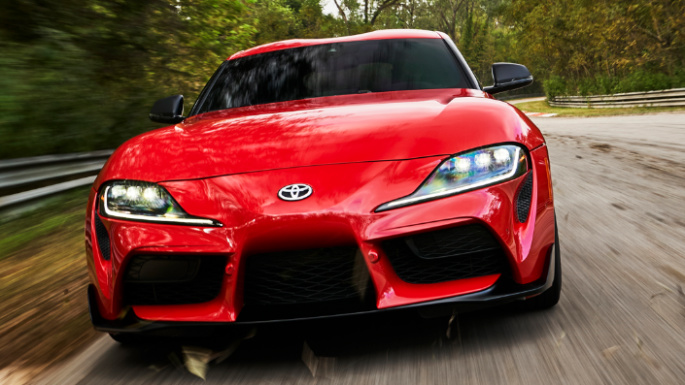 There's a lot of performance and modern tech value in the 2021 Supra, especially in the GR Supra 3.0, which has a base price of $50,990. But the new 2.0 trim starts at $42,990. The 2021 BMW Z4 sDrive30i starts at $49,700 with the same engine as the Supra, although it has a convertible roof that the Toyota lacks at any price. The 2021 Porsche 718 Cayman also comes equipped with a turbocharged, 2.0-liter four-cylinder, but has a significantly higher base price of $59,900. All Supra models are rear-wheel-drive and a limited-slip differential to help send its power to the tires more effectively.

The only place where value isn't as top-priority is in its infotainment and convenience systems. Consumers have to shell out an additional $3,485 to get technology features such as Apple CarPlay and automatic emergency braking in a car that already starts at $42,990. That's especially stingy from Toyota.

Despite the 2.0's appealing lower price, the 3.0 is still the route to take when balancing price and performance. With its newly uprated horsepower for 2021, it's a lot of performance that gives the V8-powered Mustang and Camaro models serious competition. What every Supra lacks, however, is the authentic exhaust note of those V8 cars. Various driving modes enhance the engine note of the Supra. Still, like systems offered by BMW and Porsche, it's considered synthetic, and nothing like the traditional notes a sports car engine would make before turbocharging and strict emissions controls were introduced. 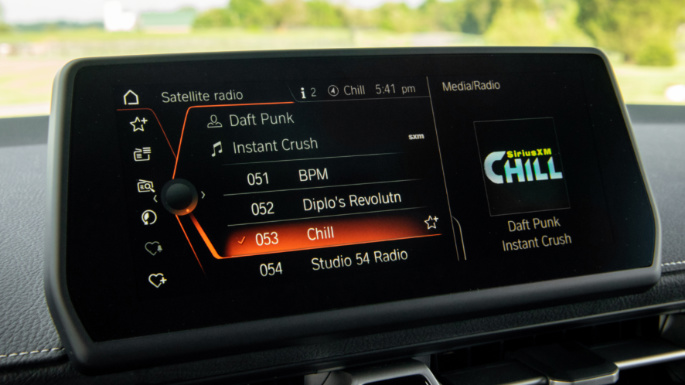 BMW fans will recognize the Toyota Supra's interior features quickly. That's not necessarily a bad thing, since BMW's iDrive system is one of the most comprehensive and responsive infotainment systems on the market, and worlds removed from anything Toyota or Lexus offers on its current vehicles. But it also suffers from BMW's tradition of making the best features expensive options.

The Supra offers good tech, but consumers have to pay for it. Standard features on the 2.0 include an 8.8-inch display screen with HD radio, USB port, satellite radio, and a 4-speaker sound system. The 3.0 adds a 10-speaker sound system to the features from the 2.0. The 3.0 Premium and A91 also add standard a 12-speaker 500-watt JBL audio system, and the display screen adds touchscreen functionality.

The $3,485 Safety and Technology Package is the lower models' comprehensive tech package. It is optional on the 2.0 and 3.0, though not on the 3.0 Premium or A91. It features all of the safety tech offered in the Driver Assist Package. It also includes an 8.8-inch touchscreen with built-in navigation, a 12-speaker 500-watt JBL audio system with amp, Apple CarPlay, speed limit information, and real-time traffic monitoring, Concierge Service, stolen vehicle recovery, Automatic Emergency Call, and remote maintenance alerts.

Android Auto, however, is unavailable on any Supra. Not only is that out of step with other Toyota products, but it's also not in keeping with BMW's vehicles with the most current iDrive system. The Supra uses a version of BMW's previous-generation infotainment system. While it's a very usable system, it lacks features becoming increasingly common on even sports cars. Chevrolet and Ford offer Apple CarPlay and Android Auto as standard on their easier-to-use infotainment systems, and Porsche also makes this readily available on the 718 Cayman's older interface. 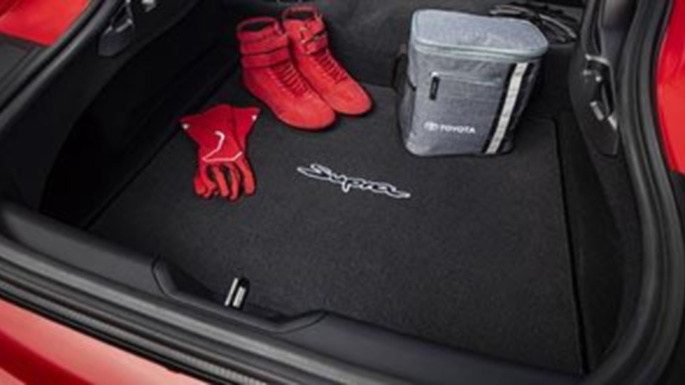 No two-seat sports car is expected to be practical or even particularly spacious. The Supra lives up to that tradition, but it does better than many rivals to make it remotely livable as a daily driver. The cabin is generally comfortable and even accommodates taller drivers, with enough for the legs, hips, and shoulders, yet still small and sportscar-like. All trims have identical interior dimensions: headroom comes in at 38.3 inches, legroom 42.2 inches, shoulder room 54.5 inches. It's also not too much of a contortion act to get in and out, although the Supra's low stance and roof will make it difficult for taller drivers to get in and out with much grace.

While that isn't much at all for cargo room, the way the rear hatch opens up makes loading and unloading cargo very easy, and passengers can even access items in the trunk space if they pack it in the right way. There are 10.2 cubic inches of cargo volume in the trunk, among the best in the class, and even rivaling some small hatchbacks.

The Supra may lack the Chevy Camaro and Ford Mustang's rear seats, but those seats are best used for packages. At least they offer the fold-down capability for longer items. The Supra can't compete with that, however. And it also lacks the Porsche 718 Cayman's front storage area and list of available accessories for attaching skis or snowboards. 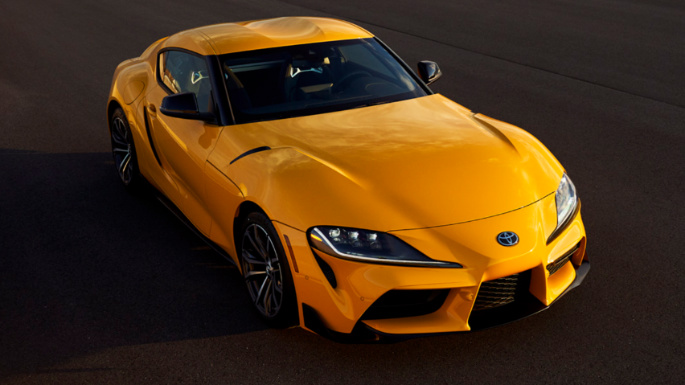 The 2021 Toyota Supra's styling isn't for everybody, but it certainly stands out against the rest of the new car market. The sleek exterior features classic sports car lines and proportions. It is very small in-person. Its size is closer to its less-powerful sibling, the Toyota 86, rather than its competitors, the BMW Z4, Ford Mustang, Chevrolet Camaro, and Porsche Cayman. Specific styling cues are a throwback to the last-generation Supra, such as its front bumper and headlights and a rear ducktail-style spoiler.

The higher the trim, the more carbon fiber exterior bits are available, and various graphics and differing wheel finishes. However, the base 2.0's wheels are smaller, and their tires look more aggressive and meaty, which takes the Supra's classic sports-car aesthetics a step further. 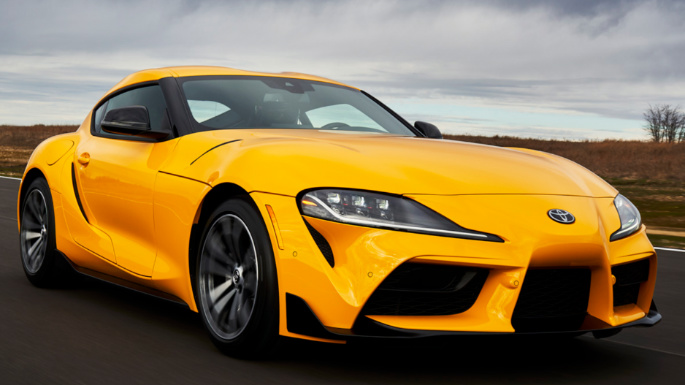 Fun behind the wheel is the Supra's most valuable high-card. With so much power on tap to move its relatively low curb weight of 3,181 pounds (the 3.0 is 3,400 pounds), that's transmitted to the rear wheels through a standard eight-speed automatic transmission.

Slowing down all that acceleration is no issue thanks to powerful Brembo brakes on some models, and grippy tires achieve up to 1.02 Gs on the skidpad. Six-cylinder models come with electronically-controlled adaptive dampers ensure a comfortable ride that can be stiffened up at the touch of a button for more planted, sharp handling. Drivers can expect classic sports car driving dynamics just by plopping down in its sporty, well-bolstered front seats, with a low-slung driving position, high doors, and a steering wheel within close reach for maximum control.

The chassis balance is the cherry on top of the Supra's performance. The four-cylinder engine is also entirely behind the front shock towers, making it a front-mid engine placement that centers the weight better between the wheelbase. It has loads of grip and is exceptionally controllable if the rear-end starts to step out in the corners. 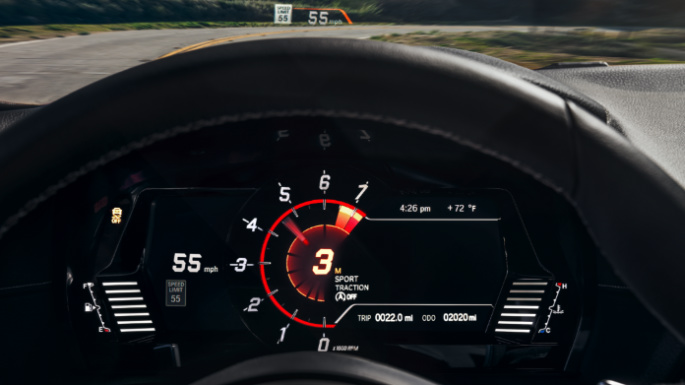 The 2021 Supra's fuel economy is one of its best characteristics, especially for a modern, high-performance sports car. The 2.0 with its turbocharged four-cylinder achieves an EPA-estimated 25 mpg city, and 32 highway, on par with some four-cylinder hatchbacks. The 3.0-liter turbocharged six-cylinder gets slightly worse fuel economy, but it's still an impressive 24 mpg city and 31 highway, considering the performance on offer.

Unsurprisingly, the BMW Z4 with either engine option gets comparable fuel economy to the Supra. The Ford Mustang receives a similar fuel economy rating with its turbocharged, 2.3-liter four-cylinder and 10-speed automatic. With its turbocharged, 2.0-liter four-cylinder, the Chevrolet Camaro isn't far behind with a rating of 30 mpg highway. The Porsche 718 Cayman is rated at a lower 21 mpg city and 27 highway. 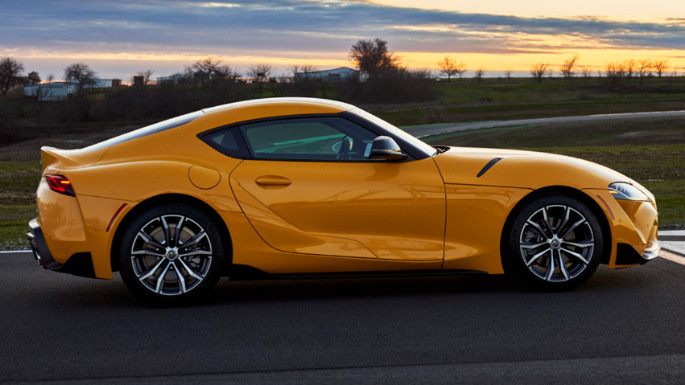 The 2.0 sits at the bottom of the hierarchy, with prices starting at a manufacturer's suggested retail price (MSRP) of $42,990. It comes equipped with the turbocharged 2.0-liter four-cylinder engine, 18-inch alloy wheels, an 8.8-inch display screen with HD radio, USB port, satellite radio, and a 4-speaker sound system, a mechanical limited-slip differential, an eight-speed automatic transmission with paddle shifters, Alcantara and leather-clad interior, and six colors to choose.

The 3.0 follows up next with a starting price of $50,990. It features all of the standard equipment featured on the 2.0, though now with the more powerful turbocharged 3.0-liter inline-6 engine under the hood, adaptive dampers, and an electronically-controlled limited-slip differential.

Getting into a more luxurious territory, the 3.0 Premium comes in at $54,490 to start. It takes it a step further with a full black leather interior, choice of seven exterior paint colors, and black-painted front lower lip spoiler and side skirts.

Finally, the beautiful A91 edition is just a tad more at $54,795, which includes every lower trim's standard options and then some: a black satin-finish double-hash racing decal across the three-quarter rear view, 19-inch forged alloy wheels in a matte finish, carbon-fiber heated side mirrors with memory function, and black/blue Alcantara and leather sport seats with blue stitching. Its only color options are Refraction Blue and Nocturnal Black.