Powertrain: A 184-horsepower, 2.0-liter turbocharged engine with an eight-speed automatic transmission and front-wheel-drive. 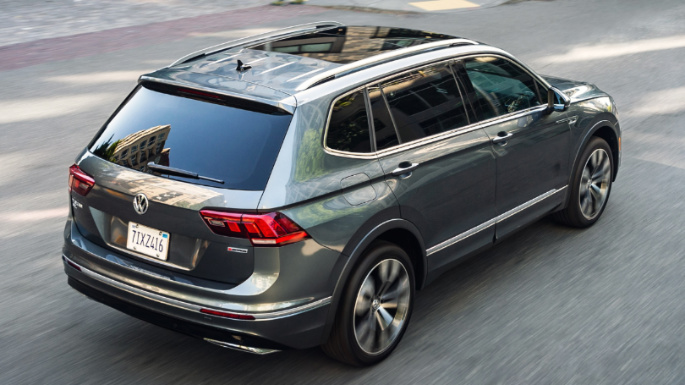 The Volkswagen Tiguan competes in one of the most popular segments for new vehicles right now: compact crossovers. VW’s entry into the race is slightly different, however, as it’s one of the only compact SUVs on the market to offer seven-seat capability. It’s also the only European brand in the segment; the Tiguan mimics other VWs that try to bridge the gap between mainstream pricing and higher-than-normal quality and driving dynamics.

Last redesigned for 2018, all 2020 Tiguan models now get automatic emergency braking with pedestrian detection, as well as blind-spot monitoring. The Volkswagen Car-Net telematics services have been enhanced with an updated smartphone app and a new smartwatch app to monitor vehicle information, track where the vehicle is, and perform functions such as checking the door locks or flashing the lights.

The sport-oriented SE R-Line model now comes as with black exterior trim, including gloss-black 20-inch wheels, while the SEL model gets a heated steering wheel and rain-sensing wipers, while the R-Line appearance package is now standard on all SEL Premium models.

The 2020 Tiguan is available in five trim levels. It sits as VW’s entry-level SUV, below the Atlas Cross Sport and three-row Atlas models. 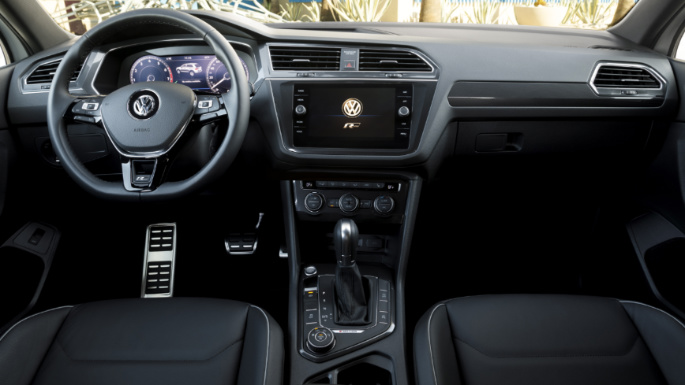 The Insurance Institute for Highway Safety (IIHS) awarded the 2020 Tiguan its Top Safety Pick award -- the agency’s second-highest ranking. The Tiguan scored highly in all categories for crash protection as well as crash prevention.

The National Highway Traffic Safety Administration (NHTSA) has not tested the Tiguan for frontal crash protection but gave it five stars for side crash protection. However, the rear door became unlatched in the test. While it did not contribute to any injuries to the dummy in the rear seat, it increases the chances of a person being ejected from the vehicle in the event of a crash, according to the agency.

All 2020 Tiguans now come with automatic emergency braking with pedestrian detection, as well as blind-spot monitoring, as standard equipment. Adaptive cruise control, lane departure warning, and lane-keep assist only show up on SEL and SEL Premium R-Line models. The latter is the only one to have adaptive LED headlamps.

Some automakers are making these features standard on all versions, while others are at least offer packages to upgrade driver assistance technology on lower trims.

At least all Tiguans get VW’s Car-Net telematics system, which can provide emergency assistance in the event of a crash. 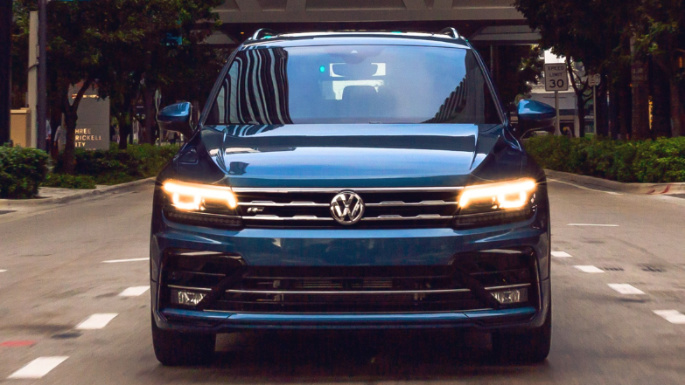 All Tiguans come well equipped, and the base price of just under $26,000, while slightly higher than some rivals, includes nearly all of the features considered typical in this class. But an all-wheel-drive SE comes in at just under $30,000 and adds many desirable features, such as a power driver’s seat, dual-zone automatic climate control, heated front seats, keyless entry and push-button start, and more.

One oddity is that while the third-row seat is standard on front-wheel-drive models, it’s a $595 option on Tiguans equipped with VW’s “4Motion” all-wheel-drive system. 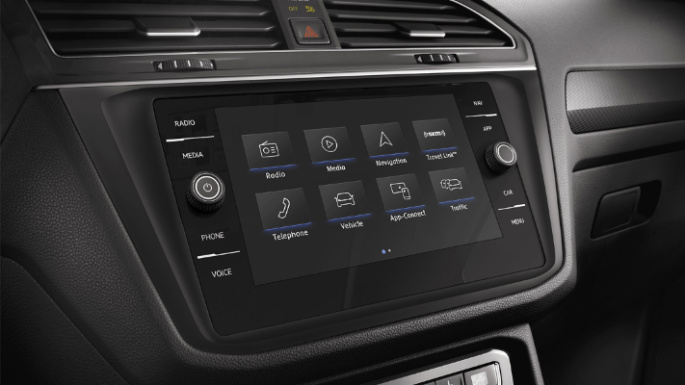 Every version of the 2020 Tiguan comes standard with Apple CarPlay and Android Auto, as well as smartphone mirroring capability. The base S model uses a 6.5-inch touchscreen, while all other models get an 8-inch version. While it’s not loaded with features, it’s a fairly straightforward system with clear icons.

SEL and SEL Premium R-Line models not only get built-in navigation but Volkswagen’s Digital Cockpit instrument panel. It replaces the physical dials with a TFT digital display that can be configured to show different information, such as simulated dials for tachometer and speedometer, audio information, or a full-screen map for the navigation system. It’s unlike any system currently offered in the class, and even more comprehensive than what some premium brands offer. Especially on the SEL, it’s a slick piece of technology on a $33,000 vehicle today. 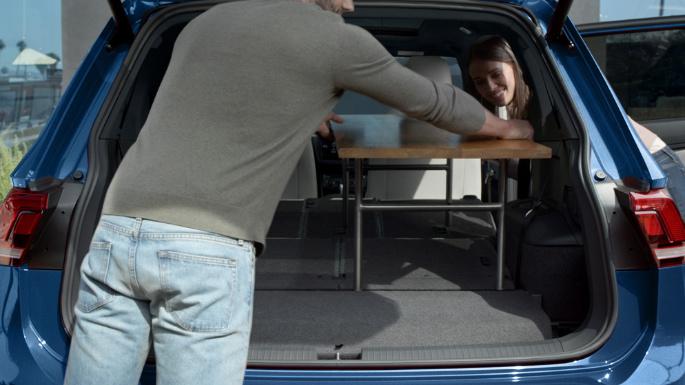 The Tiguan’s calling card is that it’s one of two vehicles in this class to have seven seats, the other being the aging Mitsubishi Outlander. The seats themselves are small and close to the floor, and unsuitable for adults. But pre-teens should be OK in them for short trips and parents might find they’re useful on carpool runs. It also means the second-row seats can be adjusted forward and backward to give third-row passengers more legroom, as well as reclined when no one is back there.

Despite being one of the longest vehicles in its class, the Tiguan sits somewhere midpack for cargo space. Its 73.5 cubic feet of space with the rear seats down is more than a Ford Escape, or Mazda CX-5 can provide, but well short of the cargo capacity a Honda CR-V or Toyota RAV4 offers.

On models with three rows of seats, that figure falls to 65 cubic feet because the third row doesn’t sit flush with the floor when folded, resulting in a raised cargo area. Still, it’s a usefully square area, and loading and unloading are easy thanks to a low bumper height. And the second-row bench splits in a 40/20/40 split, allowing long items to be loaded – such as skis and snowboards – while still allowing room for two passengers in the rear. That’s an unusual feature, even in this class. 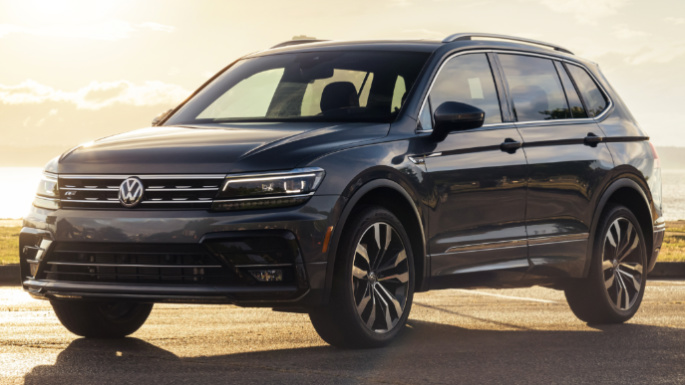 Upright styling with lots of glass area makes the Tiguan practical for those trying to see out of it. That makes lane changes easier than in some more adventurously styled rivals, even though the Tiguan is far from a small SUV. What it doesn’t do is give the Tiguan much design flair, however. Opting for the R-Line models with their 20-inch wheels and more aggressive bumper designs helps matters a little.

The Tiguan’s interior is plain, but its no-nonsense design makes it easy to get comfortable and understand the most important controls. Physical volume and tuning knobs make the infotainment system easier to use, although the touch-sensitive shortcut buttons on all but the basic system take more getting used to. But all models have simple rotary controls for temperature and fan speed, as well as physical buttons for defogger and heated seats, unlike the increasing number of vehicles that bury those functions in menus in a touchscreen. There is a generous number of storage bins, as well, and deep cupholders in the center console, as well as door bins that can accommodate large water bottles.

Interior quality is another Tiguan high point. While some of the materials don’t feel particularly plush, those people are most likely to touch have a typically German aura of solidity and refinement. And the pieces themselves feel solid, as well. The design is more refined and free of the gimmicks that some rivals use to disguise cheap plastics, too. While it’s no Audi, the Tiguan seems a half-step above what’s expected at this price. 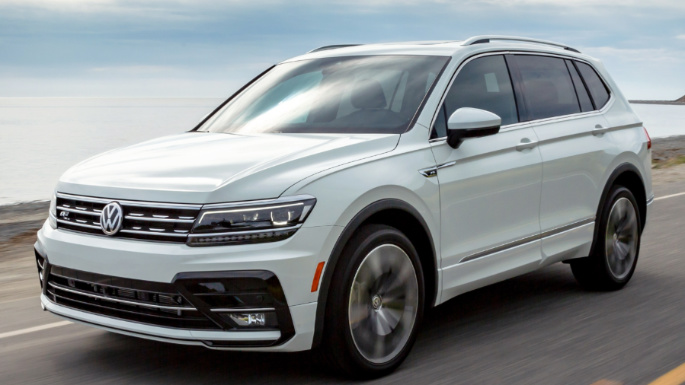 All Tiguans use the same 184-horsepower, 2.0-liter turbocharged four-cylinder, and eight-speed automatic transmission. While that looks competitive on paper against the base engines of nearly all of its rivals, the Tiguan weighs more than most of its rivals. It also struggles with some hesitation from a stop and the eagerness of the transmission to be in the highest gear to save fuel. It fails to be responsive and can feel downright underpowered unless the accelerator pedal is pressed firmly down. The fact some rivals offer uplevel engines with nearly the same fuel economy as the Tiguan’s standard engine hurts matters even more. At least drivers can manually override the transmission’s automatic settings for more power if urgent passing power is needed.

Other than a power deficit, the Tiguan is relatively composed over bumps, offers a firm but relenting ride, and even responsive handling. While it’s not exactly a Mazda CX-5 in terms of agility, the Tiguan holds its own in the corners better than most compact SUVs, and even at times doesn’t feel its nearly 4,000 pounds of weight. 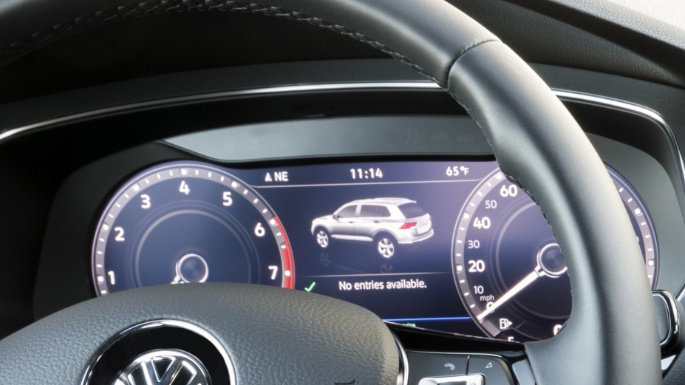 The Tiguan’s fuel economy pretty much brings up the rear of the compact SUV class – only the Hyundai Tucson with its 2.4-liter engine, and the Chevrolet Equinox and GMC Terrain with their more powerful 250-horsepower 2.0-liter turbos are worse. Meanwhile, the Honda CR-V and Toyota RAV4 are rated at 30 mpg combined by the EPA with their base engines, and the Ford Escape and Nissan Rogue aren’t far behind. Larger vehicles such as the BMW X3 and Subaru Outback also do better than the Tiguan front-wheel-drive, even when those are equipped with all-wheel-drive.

VW also lacks an electrified version of the Tiguan, while the Ford Escape, Honda CR-V, and Toyota RAV4 can be had as gas-electric hybrids to offer fuel economy more akin to an economy car, without sacrificing much in the way of performance. The RAV4 Prime is a plug-in hybrid that doesn’t cost much more than a loaded Tiguan, either. 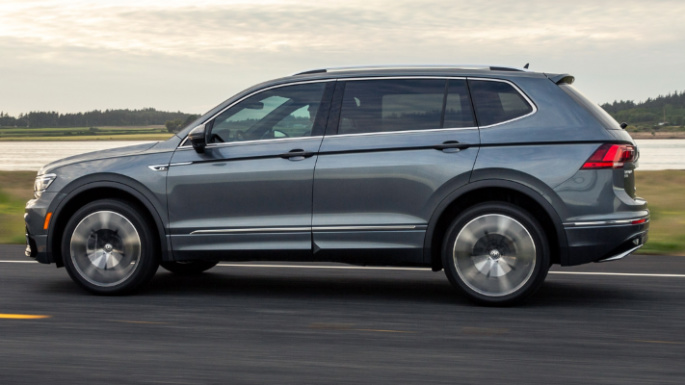 The 2020 Volkswagen Tiguan starts from $25,965 MSRP, including the $1,020 destination charge. It’s available in five trim levels, all of which offer all-wheel-drive for an additional $1,300, except for the SEL Premium R-Line where it’s standard.

All-wheel-drive is an option. When selected, the third-row seat becomes an option as well.

In addition to all-wheel-drive, a panoramic moonroof is also available.

All-wheel-drive is the only option.

A third-row seat is the only option.