The 2019 BMW X3 belongs to the third generation of the compact luxury crossover SUV. Released in late 2017, the current X3 received a variety of new technologies such as redesigned exterior and interior LED lighting, and the latest BMW iDrive 6.0 system with a 12.5-inch widescreen touchscreen monitor for navigation and media features, along with optional gesture control for infotainment functions.

The X3 competes against luxury SUVs such as the Audi Q5, Porsche Macan, Jaguar F-Pace and Mercedes-Benz GLC Class. Most reviewers found the 2019 BMW X3 to be a very well rounded truck that provides a thrilling driving experience.

Highlights of this year's X3 include its range of powerful engines, responsive handling, cargo capacity and interior comfort. New in 2019 is the rear-wheel-drive sDrive30i trim, as well as additional technology features.

The 2019 BMW X3 is a well-rounded sport utility vehicle that can perform well under nearly all driving conditions. Its handling, cargo space and fuel economy make it worth considering. Exceptionally positive reviews from automotive reviewers from around the world have placed the X3 among the best luxury compact SUVs available in 2019.

The 2019 BMW X3 has a price slightly above the average. As a result, those looking to maximize value may wish to compare prices for competitors such as the Audi Q5 or Acura RDX.

The BMW X3 was redesigned for the 2018 model year, and there are only a few notable updates compared for this year's car. A new rear-wheel-drive sDrive30i trim was added to the lineup with a lower base price for those who do not need the all-weather traction of all-wheel-drive. A variety of safety features became standard as well. They include front and rear parking monitors, automatic emergency brakes, driver drowsiness alerts, forward collision warning, pedestrian warnings and traffic sign recognition.

The BMX X3 starts at an MSRP of $41,000. That is higher than the average starting price of some competing luxury SUVs from Acura and Volvo, for example. The six-cylinder X3 M40i trim is available starting at $54,500. That is also higher than the top trim of most other crossover SUVs, but many reviewers feel it is justified considering the level of performance offered.

The Jaguar F-Pace is considered among the most agile and carlike SUVs on the market today. Though it is still a close matchup, some reviewers feel the F-Pace is one of the SUVs worth considering if you are shopping for an X3.

The Acura RDX does not have a performance variant on par with the X3. Despite this, its high level of interior quality and significantly lower base price make it an SUV worth considering if you are looking at the BMW.

The Audi Q5) is another high-quality luxury SUV that is worth checking out if you are interested in the BMW X3. Some reviewers felt the Q5) was slightly better than the X3 because of its superior ride, interior space and material quality.

The 2019 BMW X3 has over 8 inches of ground clearance allowing it to live up to the name of a sport utility vehicle. The X3 works well on sand, snow and steep mountainous terrain. Available with the Adaptive M Sport Suspension, the M40i offers increased stability in all driving conditions. 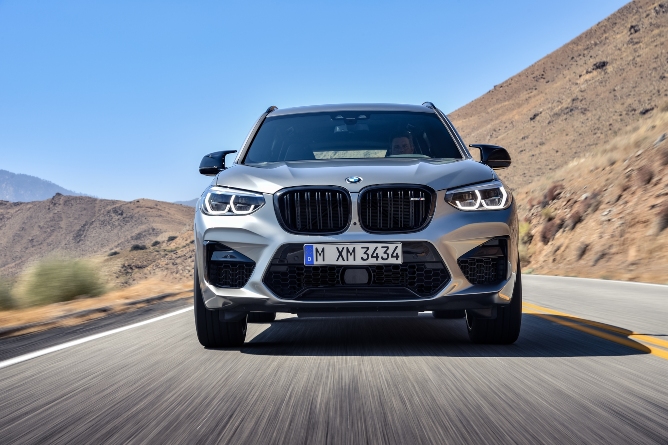 The BMW X3 is available with a factory installed trailer hitch the BMW SAV®. With split folding rear seats and an ample 62.7 cubic feet of cargo space, the X3 is well suited for adventure.

Thanks to the features such as active grille shutters and other design enhancements, BMW says fuel economy is improved as noise is reduced. The M Aerodynamic kit, standard on the M40i, adds gray accents across the exterior. 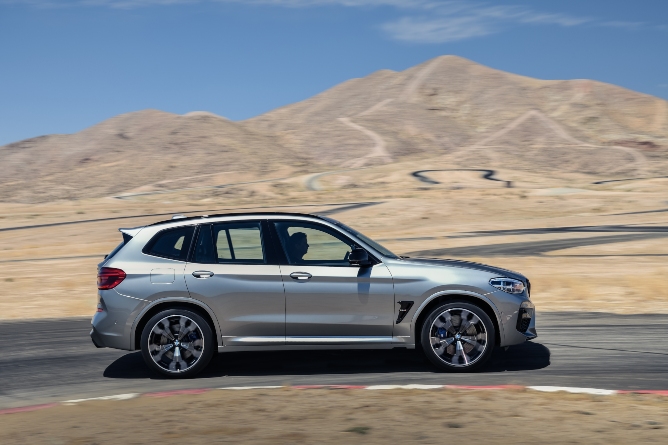 Most reviewers found the BMW X3 to offer a luxurious and well designed exterior shape that allows it to compete against the world's top crossover SUVs.

The BMW X3 will comfortably seat five passengers in two rows. Most reviewers found both the front and rear seats to be very spacious and well appointed for adults or children. Some suggest that only two large adults are likely to fit in the X3's backseat. 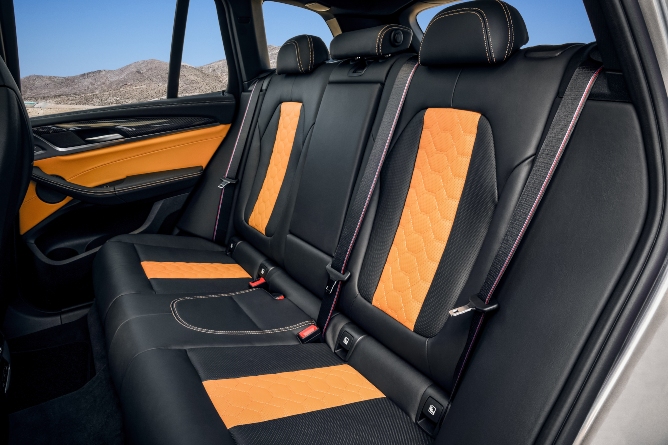 Reviewers generally did not find anything negative about the interior of the X3. It is frequently described as being luxurious and high end. Despite this, some reviewers felt the X3's competitors such as the Mercedes GLC or Audi Q5 offer more refined and opulent interior styling.

In general, the BMW X3 is considered one of the top luxury SUVs in the world in large part due to the high-quality materials and level of comfort to found within the cabin. 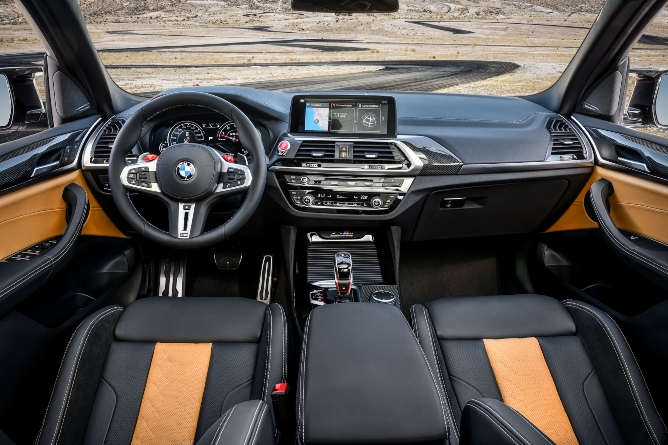 This year's X3 offers more cargo space than nearly any of its competitors. With rear seats in the up position, there is 29 cubic feet of cargo space. With the seats down, the X3 provides up to 63 feet of cargo space. These numbers help to emphasize the immense utility and practicality this vehicle offers.

The 2019 BMW X3 is capable of towing up to 4,400 pounds. That is considered a relatively high capacity for a smaller luxury SUV like this. The X3 can be fitted with a BMW-approved Class III towing hitch. 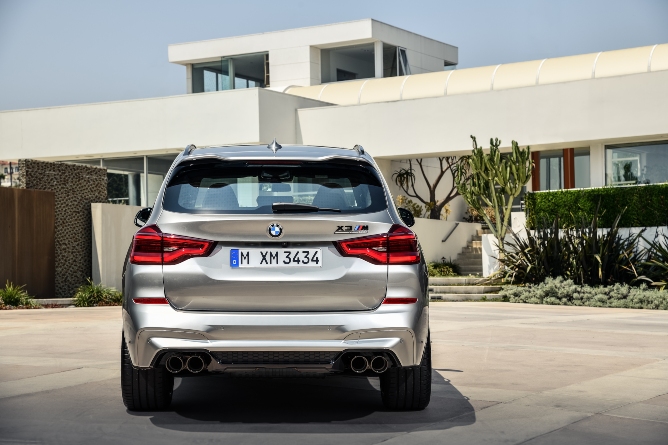 J.D. Power and Associates gives the 2019 BMW X3 a predicted reliability rating of four out of five stars. This is the second-best possible score. The X3 also comes with a four-year/50,000 mile factory warranty.

The BMW X3 is packed with impressive technologies as standard features. These include a 12-speaker stereo system, USB port, and the iDrive infotainment system with a 6.5-inch screen, controlled either by touch or a rotary dial on the center console. It can be upgraded to include navigation, Apple CarPlay, a Wi-Fi hotspot, satellite radio and a 16-speaker Harman Kardon stereo system. However, BMW does not support Android Auto. 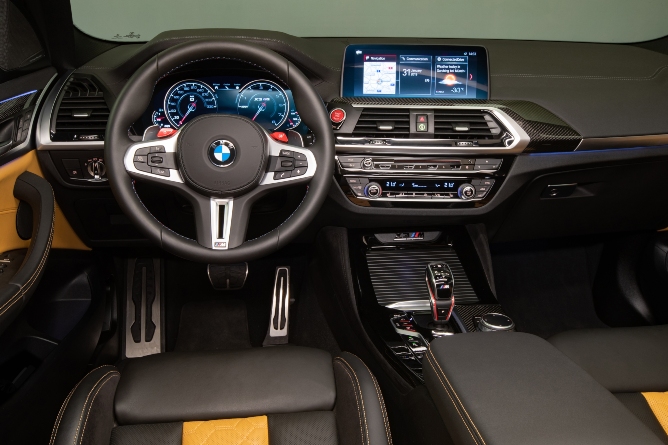 Reviewers found the iDrive system to be relatively user-friendly though less tech-savvy users might need some time to understand its interface. One of the key highlights of the X3's technology is BMW's integration of voice recognition. Many of the infotainment features can be operated with simple voice controls.

Optional gesture control, new in the 2018 X3, allows you to control infotainment settings by simply waving your hand in front of the unit. But some reviewers found it also required practice to trigger the system, and relied on the voice control or physical controls instead.

The BMW X3 is considered extremely safe by leading crash-test agencies. The Insurance Institute for Highway Safety named it a Top Safety Pick+. That is the highest possible safety rating awarded by this organization.

The BMW X3 is considered by reviewers to be a thrilling car to drive regardless of which powertrain option is selected.

The BMW X3 gets impressive gas economy for a small luxury crossover. The EPA rates it at 23 miles per gallon in the city and 30 miles per gallon on the highway. These are excellent fuel economy numbers for an SUV of this size. When compared to the Acura RDX, another similar SUV that gets good fuel economy, the X3 reduces fuel expenses by about $160 per year.

Some reviewers feel the BMW X3 is one of the absolute best-handling SUVs available. They highlight its precise and agile cornering as one of the car's best qualities.

The BMW X3 offers an eight-inch ground clearance making it suitable for many off-road driving uses. All-wheel drive and hill start modes are useful features for those looking for an off-road capable vehicle.

While some reviewers felt the BMW X3 did not handle as well as other competitors, nearly all agree it is among the smoothest and best driving luxury SUVs out there. All in all, the BMW X3 offers a well-rounded driving experience.

BMX X3 models with a 30i in their name have a turbocharged 2.0-liter four-cylinder engine. Rear-wheel-drive models are designated sDrive, while the xDrive variants have all-wheel-drive.

The sDrive30i's fuel economy is rated at 23 miles per gallon in the city, 30 mpg on the highway and 26 mpg combined. The xDrive30i manages 22 mpg city and 29 mpg highway.

The M40i has a turbocharged 3.0-liter six-cylinder engine. It is an all-wheel drive vehicle. This trim is capable of 20 mpg city and 27 mpg highway or 23 mpg combined

Selecting a 2019 BMW X3 starts with two key choices. First, rear-wheel or all-wheel drive, and second whether you will choose the high-performance M40i variant.

Many drivers select the sDrive30i or xDrive30i trims, which offer a tremendous value with MSRP in the low $40,000s compared to the mid-$50,000 prices of the M40i. Nearly every upgrade available on the M40i besides the more powerful engine and the suspension is possible in the lower trims.

Some reviewers feel the BMW X3 is a tougher sell given its higher than average price tag and that it lacks some of the most advanced technologies that some rivals do, while some common options are standard on many competitors. That said, because it is widely considered one of the best crossover SUVs on the market, the X3 offers a strong value based on its performance, styling, reliability, and massive cargo space.

The BMW X3 sDrive30i starts at $41,000. It includes a 248 horsepower turbocharged four-cylinder engine, eight-speed automatic transmission and rear-wheel drive. For $46,300, you can upgrade to the M Sport design package.

For $2,850, the Convenience Tier offers satellite radio, keyless entry and a panoramic moonroof. For $6,250, the Premium Tier receives all of the Convenience Tier upgrades plus Apple CarPlay, a head-up display, built-in navigation, heated front seats and a heated steering wheel. The Executive Tier, which is available for $9,750, receives all lower-tier features plus a 360-degree camera, gesture control, full LED exterior lights and a digital driver's display.

For $1,300, drivers can add the Dynamic Handling package which includes multiple upgrades to improve handling.

For an additional $2,950, the M40i can also be upgraded to include heated front and rear seats, heated steering wheel, navigation, and a head-up display.

For $2,550, the Executive Package includes parallel parking assistance, a 360-degree camera and other features.