The Buick Encore is a subcompact luxury SUV which is still in its first generation. The Encore was new for the 2013 model year and has not had a significant redesign since that time.

Its General Motors sibling, the Chevrolet Trax, is built on the same platform as the Encore and also competes with it.

A new change to the 2019 Buick Encore comes by way of subtracting two of the optional trim levels of the Encore to make the lineup simpler. Options from those trims have been integrated into the other trim levels or have been made optional extras.

The only other upgrade for 2019 includes the option to upgrade the Ecotec 1.4 liter turbocharged engine to a more powerful version of itself, giving the Encore some much-needed pep.

The Encore goes to great lengths to prioritize luxury and comfort for its buyers. By all accounts, it has succeeded. It does fall behind some of the newest and less expensive competitors in terms of technology, safety features, and price.

The Encore exists in a highly competitive and in-demand segment, but it can hold its own. One of the universally praised highlights of the SUV is that its predicted reliability is stronger than most other competitors, a welcome bonus for anybody who would look to buy any vehicle.

As expected for the class, the Buick Encore can’t hide its small stature. It looks small because it is small. 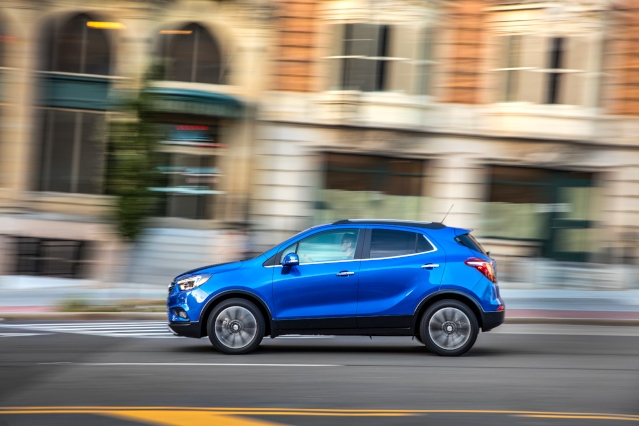 Because of that, it also looks slightly awkward with its tall roofline, low 6.5-inch ground clearance, and short front and rear overhangs.

Its overall shape is slightly bulbous, though it doesn’t look fat. Its rounded edges set it apart from many new vehicles today with sharp, aggressive lines. Styling is conservative yet handsome.

The large 18-inch wheels fill out the wheel wells nicely and don’t make it look tipsy, even though it is an SUV with a tall cabin.

Roof rails come standard on all trim levels of the Encore, which is a welcome addition that is absent in many other new vehicles without adding extra cost. 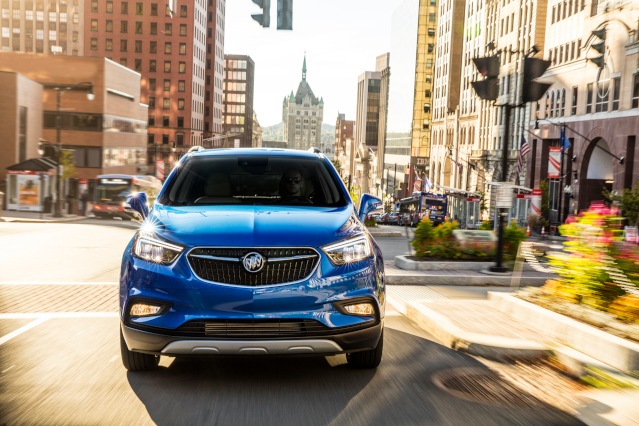 Interior quality and comfort are where the Buick Encore shines the brightest.

Reviewers praise the QuietTuning active noise cancellation system which Buick offers as standard on the Encore. It includes features like acoustic-laminated glass, special ride-quiet tires, and additional sound deadening materials throughout the vehicle to keep road and wind noise out. 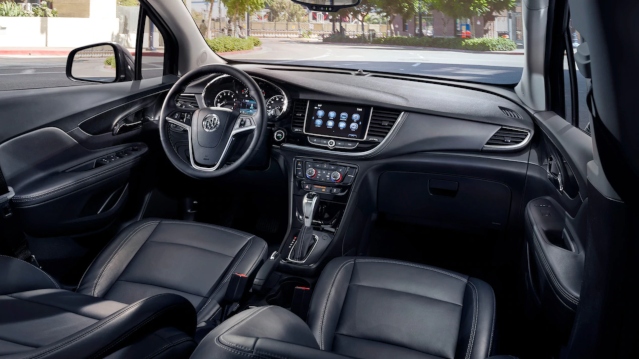 Materials are noted to be upscale though some knobs, buttons, and switches are also noted to be taken from other vehicles from GM’s various brands.

Ride quality is said to be good as long as more than two people aren’t being transported. That is to be expected in such a small vehicle with such a small engine.

Legroom is better than average for the class though reviewers note that three full-size adults would not fit well in the rear seats.

Visibility is said to be good as the upright front seats give a commanding view of just about everything around both the passengers and driver.

Seating comfort is where the Encore falls short. Almost all reviewers note that the seats have very little support with flat cushions and little to no bolstering, albeit with good lumbar support.

Utility and Practicality place the Buick Encore in the middle of the pack.

Rear cargo space is more extensive than many competitors such as the Mazda CX-3 and Toyota C-HR but is smaller than the Honda HR-V and a few others. An additional in-floor cargo area is contained under the load floor. 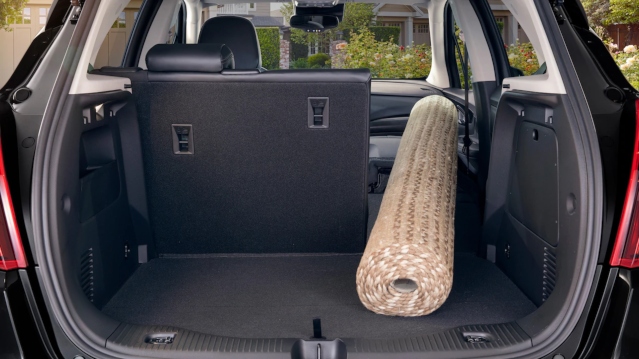 The Encore’s overall size prevents it from being truly practical, with a tiny space behind the back seats when in their upright position. They can fold down to reveal 48.4 cubic feet of space, but the process of doing this is rather cumbersome and awkward, as noted by reviewers.

Adventure-seeking is not in the Encore’s handbook. 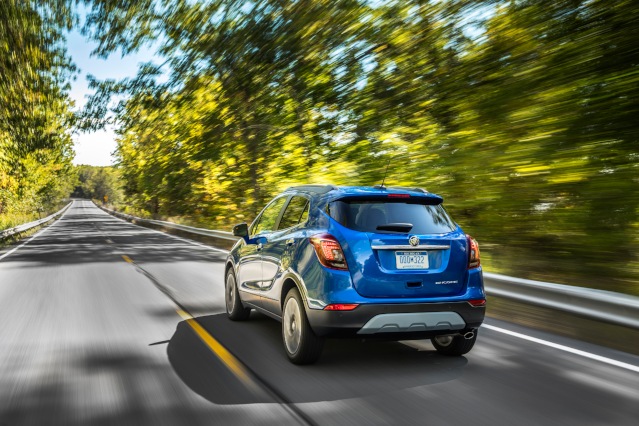 Ground clearance is limited, with the front lip scraping several times throughout reviewers’ test drives. Off-roading capability is also limited, even though the Encore does offer all-wheel-drive.

Getting people and cargo in and out of the Encore are both said to be reasonably comfortable with a low lift-over and step-in height. Tall doors with wide openings also help.

A LATCH child safety seat system is standard for the rear seats of the Encore, and there is enough legroom for two regularly-sized adults in a pinch.

Interior storage is ample with cup holders and storage compartments throughout the cabin.

As an urban people-mover, the Buick Encore does well for itself while it is let down by its lack of size, storage, and all-around capability everywhere else.

Technology and infotainment offerings are other areas in which the Encore shines.

Apple CarPlay and Android Auto are both standard on all trim levels, features that are lacking as standard options in several other competitors. 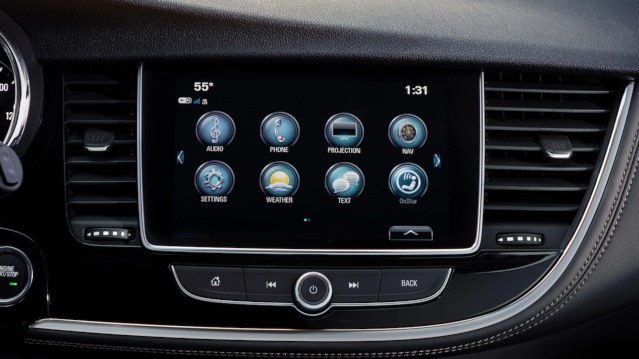 Buick’s Intellilink infotainment system, displayed on an 8-inch touchscreen, is praised by reviewers for its straightforward and easy to use layout.

OnStar is standard on the Encore as it is in most other GM vehicles. A navigation system is also available along with Bluetooth, basic voice controls, and the MyBuick app, which allows essential vehicle functions to be controlled through your smartphone.

A 7-speaker Bose audio system is available over the standard 6-speaker system.

Rounding out the notable technology features are a proximity keyless entry system, rearview camera, and a 4G LTE hotspot.

The National Highway Transportation Safety Board rated the Encore very highly as it did above average in all crash test results, but driver assistance aids are lacking compared to other vehicles in the segment.

Many safety features available at a lower price point on other competitors are not available on the Encore at all. Available ones include blind spot monitoring, lane departure warning, forward collision warning, rear cross-traffic alert, and parking sensors. Some of these are available only on the highest trim levels of the Encore.

Reviewers note that the overall driving experience of the Encore is neither stellar nor abysmal.

High points of the driving experience include a surprising amount of nimbleness, a much-needed power boost from the upgraded 1.4-liter turbocharged engine, and a smooth six-speed automatic transmission.

Two engine options are available on all trim levels of the Buick Encore, both of which are mated to a 6-speed automatic transmission:

A 1.4-liter turbocharged four-cylinder engine is offered with 138 horsepower and 148 lb-ft. of torque.

The same 1.4-liter turbocharged engine can be had on higher trim levels and produces 153 horsepower and 177 lb-ft. of torque.

Reviewers note that the upgraded engine option provides the much-needed power that the original engine did not. It is still not fast, but it will get the job done better than the lower output engine.

Reviewers say that responsive steering feel is really what gives the Encore a feeling of nimbleness, even though the vehicle doesn’t handle particularly well.

Testers say that cornering provides a mixed bag of handling impressions. The Encore is said to feel top-heavy at times but never feels out of control.

Braking feel is noted to be overly touchy with an uninspiring overall feel. Despite this, the braking statistics indicate sufficient stopping times with a 126-foot stopping distance from 40 miles per hour. This is average for the class.

In terms of fuel economy, the Buick Encore falls to the middle of the pack.

When equipped with front-wheel drive and the base 1.4-liter engine with 138 horsepower, the Encore gets an EPA estimated 27 miles per gallon in city driving and 33 miles per gallon on the highway.

Adding all-wheel drive option drops those numbers to 26 miles per gallon in the city and 31 on the highway.

For comparison, the Toyota C-HR, which is not offered with all-wheel drive, achieves an EPA estimated 27 miles per gallon in the city and 31 miles per gallon on the highway from its 144 horsepower engine.

The Buick Encore only provides average value for a subcompact SUV.

It offers many standard features that would typically be upgrade options for other competitors. It also provides much of the traditional Buick comfort, reliability, and road composure that many long-time buyers have come to expect.

Conversely, the Encore is priced higher than many competitors that are considered to be just as good in terms of quality and which have more safety and technology features.

Additionally, the Encore is not particularly capable or comfortable on anything but the pavement, and it doesn’t offer class-leading cargo space.

All Encore trims come standard with the base 1.4-liter turbocharged Ecotec engine producing 138 horsepower. The upgraded engine, producing 153 horsepower, is available on the Sport Touring and Essence trims.

All engines are mated to a 6-speed automatic transmission, and all but the base model can be had with all-wheel-drive.

The Buick Encore is available in four different trim options:

The Preferred trim, equipped with the 1.4-liter 138 horsepower Ecotec engine and front-wheel drive, starts at just over $25,500 with destination fee included.

Opting for all-wheel-drive will bring with it a price increase of $1,500.

The Preferred trim includes a cargo cover and several package options that aren’t available on the base 1SV trim.

Buyers can choose to add a moonroof, the Safety Package – which includes rear cross-traffic alert and blind spot monitoring, the Active Package – which consists of a rear cargo mat and trailer hitch, or the road trip package – which adds various accessories compatible with the roof rail system.

The Sport Touring trim, equipped with the 1.4-liter 138 horsepower turbocharged engine and front wheel drive, starts at $26,800 with destination included.

The higher performing 153 horsepower engine is available at the cost of $900, while all-wheel drive is an additional $1500 option. Equipped with both, the Sport Touring trim starts around $29,000.

Fog lights, a rear spoiler, and remote start are included as standard options with all packages available from the Preferred trim also available on the Sport Touring. Additionally, the 7-speaker Bose audio system is available on this and higher trim levels.

The top-of-the-line Buick Encore Essence starts at around $30,200, with destination included, when equipped with the base 1.4-liter engine and front-wheel drive. Adding both the upgraded engine and all-wheel drive will bring that price up to $32,600.