The 2019 Cadillac Escalade is a popular luxury, full-size SUV that's part of General Motors' line of truck-based utility vehicles. This year's Escalade does not feature any significant upgrades, though the truck was last meaningfully updated for 2015 when the current generation was released.

Many reviewers found the Escalade to be among the top choices for large luxury SUVs with a towing and hauling capacity of 8,300 pounds which well exceeds competitors. It's also unusual among rivals to come in two lengths, with the extended ESV model offering more rear legroom and cargo space. While other attributes of the Escalade are considered well-rounded against peers, this year's model remains an excellent choice for those seeking massive amounts of space and the ability to comfortably transport heavy trailers or well-appointed boats.

The Cadillac Escalade's V8 engine, with 420 horsepower, offers a lot of power combined with fuel efficiency better than many similar large and supersize SUVs. It provides tremendous cargo space especially when the third-row seats are folded down.

Some reviewers found the standard models to lack legroom in the third seat when compared to rivals. The ESV trim addresses this, offering even more legroom for all passengers.

Since 2015, the Cadillac Escalade has not received many upgrades. New in 2018, however, was the addition of a 10-speed automatic transmission to replace what had been an 8-speed in earlier versions of the truck. Though seeking value might be interested in checking out earlier model years for a truck that is nearly identical to this year's Escalade.

When compared to the Navigator, many reviewers felt the Escalade was not as luxurious inside and did not handle as well. Reviewers felt the Range Rover's lack of third-row seating to be a setback for those who must fill all possible passenger seats in a large SUV. Several reviewers cited the Range Rover as offering a more car-like handling and driving experience in off-road conditions. While the GMC Yukon and Cadillac Escalade are very similar trucks in nearly every way, the Escalade features more luxurious standard equipment that helps it stand out.

The 2019 Cadillac Escalade is priced just above $75,000 for the base trim level. Higher level trims can cost up to $94,000. The larger ESV version adds $3,000 to the base price. That is roughly competitive with its rivals. While the Escalade has plenty of positive attributes for those in the market for a big luxury SUV such as this, it is an older design with truck-like parts that now faces newly redesigned models – some of which boast more advanced technology and better driving characteristics, according to independent reviewers.

The Escalade features an oversized, boxy design similar to many other large luxury SUVs. Some reviewers felt the Cadillac Escalade struggles to keep up with competitors such as the Lincoln Navigator which have been more recently updated on the outside and interior. 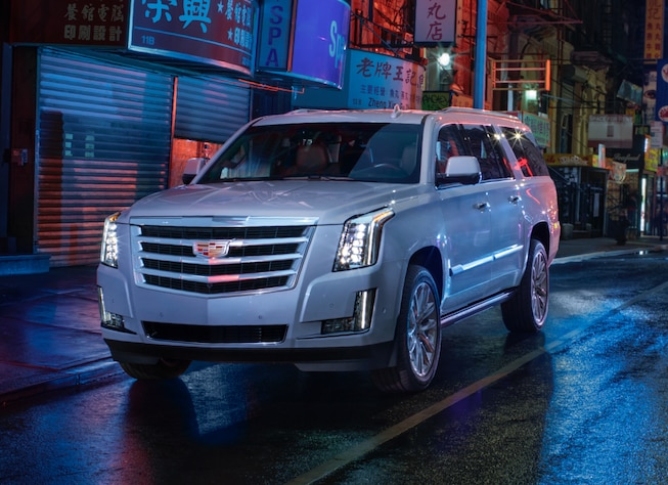 The Escalade's large, exaggerated front grille gives off an imposing front profile in line with recent Cadillac designs, which is accentuated by large LED headlights. The front grille features Cadillac's iconic branding which has been described as a coat of arms for the founder of the city of Detroit, Le Sieur Antoine De La Mothe Cadillac.

In the rear of the truck, the Escalade's elongated full LED blade taillights offer a combination of style and utility. The inclusion of upgrades like a hands-free liftgate, concierge lighting, and powered sidesteps are luxurious additions which help the Escalade to stand out. 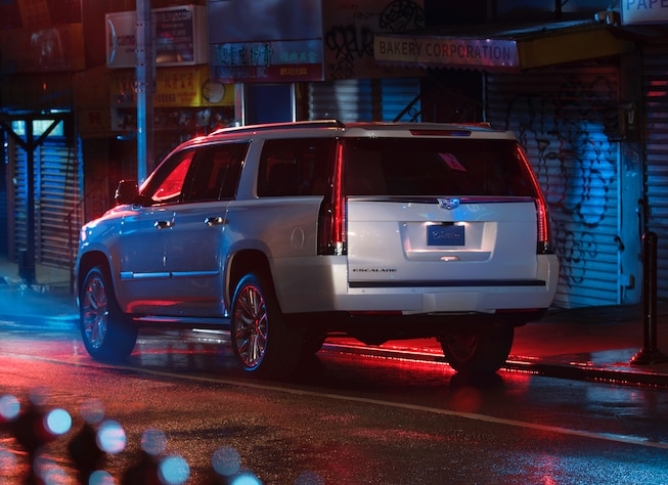 The 2019 Escalade is available with outside upgrades such as 22-inch alloy wheels, concierge lights which illuminated handles, power assisted steps and the interior of the car for easier entry and exit.

This year's Escalade features three rows of seating and is capable of comfortably carrying up to 7 passengers. By switching out the middle row bucket seats for a bench, the number of passengers can climb to 8.

Many reviewers found the Cadillac Escalade to have a sufficiently high-end interior construction featuring materials such as leather and wood which create a luxury feeling. Some felt the interior comforts of the Escalade were not able to match up against competitors such as the Mercedes Benz GLS in the crowded luxury large SUV category.

Reviewers found the seats in the Escalade to be comfortable though some found the front and middle positions to be too soft and lacking adequate support. The back row, like many other large SUVs, is more cramped than the front two rows.

Reviewers pointed out that for those expecting to have many passengers in the rear seats, the Cadillac Escalade ESV trim with its extra length could be a worthwhile upgrade to consider. The ESV trim increases back row legroom from 24.8 inches up to 34.5 inches.

The standard length Escalade is an excellent choice for those who will not frequently be driving with a packed car of 7 passengers. It has 51.6 cubic feet of storage space with its rear seats folded down, and a massive 94.2 cubic feet with the seats removed. Unlike most other rivals, the third-row seats must be pulled in and out of the vehicle, rather than folded into the floor, to create a flat load space.

The ESV trim offers increased legroom for passengers while also increasing the storage space up to 120.9 cubic feet. In general, the Escalade offers an average amount of cargo space similar to many other competitors in the luxury large SUV class. 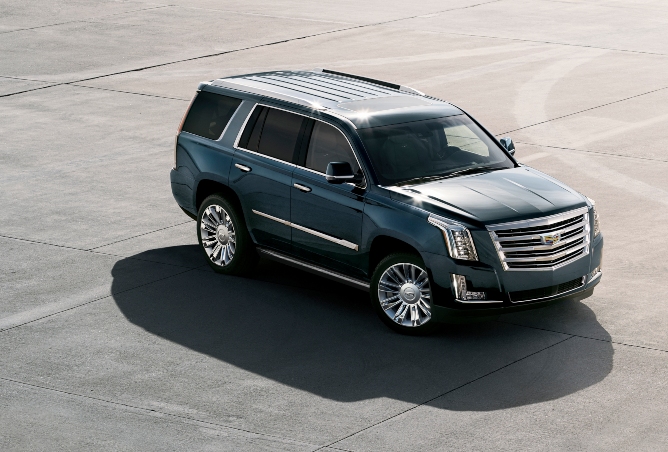 The main highlight for the 2019 Cadillac Escalade when it comes to utility and practicality is its ability to tow up to 8,300 pounds easily. Four-wheel-drive models can tow up to 8,100 pounds. Reviewers cited this as one of the most considerable towing capacities of any large SUV and something that helps this truck stand out from its peers.

The Escalade comes with AppleCarPlay and Android Auto. It also features Bluetooth, 3 USB ports, four 12-volt power outlets and a 110-volt power outlet. It can also be upgraded to include a built-in cooler in the central console. This truck has a wireless charging pad in the middle of the center armrests. 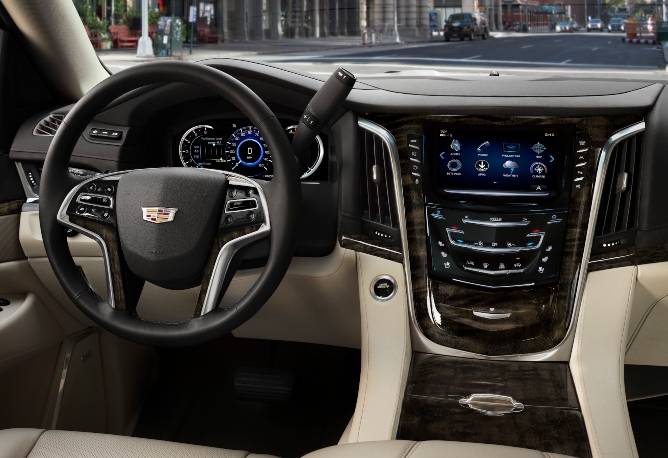 Most reviewers felt the Cadillac Escalade's technology and infotainment to be high points that help it to compete against its rivals in the large luxury SUV category. The standard CUE infotainment system has received praise from reviewers for its elegance, simplicity and ease of use.

The 2019 Escalade received a four-star safety rating from the National Highway Traffic and Safety Administration. The Insurance Institute for Highway Safety did not test it.

Some reviewers felt the Escalade should have had the Cadillac Supercruise driving assistance technology included. The additional upgrade of adaptive cruise control is a similar feature.

Some reviewers felt the Escalade's suite of driver assistance technology, though significant, cannot match up against some of the highest end competitors from the luxury large SUV category.

The Cadillac Escalade is loaded with a 420 horsepower, 6.2-liter V8 engine that is powerful and responsive to varied driving conditions. All versions of this truck feature a 10-speed automatic transmission.

Some reviewers describe the Escalade as a big, bulky truck which is not well suited for drivers who do not have experience handling such large vehicles.

Capable of towing up to 8,300 pounds, the Escalade's highway fuel economy rating of 23 miles per gallon are the best of any luxury SUV.

Some reviewers felt driving the Escalade was not as comfortable as some other competing large SUVs.

This truck features a magnetic ride control which helps to adjust the suspension to maintain a smooth ride across unbalanced or uneven surfaces. Most reviewers felt the Escalade felt safe while driving though turning and parking remain areas where there could be room for improvement in future models.

Some reviewers complained that this truck handles ponderously, making it challenging to maneuver in tight spaces due to its size. The Escalade also has a lower cornering limit than most other large SUVs, and this makes it particularly challenging to drive in tight spaces. Several reviewers describe the Cadillac Escalade's handling to be more like a pickup truck than any other type of vehicle.

The Escalade's handling also raised concerns in some reviewers who felt it might not be a good choice for inexperienced drivers. Despite this, this year's model features a special safety feature specifically designed to offer assistance to teen drivers.

Many reviewers felt the Cadillac Escalade was unable to match against competitors such as the Range Rover when it comes to handling the most demanding of off-road driving conditions. That said, this year's truck is still highly capable and can excel in more challenging backcountry driving conditions.

The 2019 Cadillac Escalade features slightly better-than-average fuel economy for the class, of 14 mpg in the city and 23 mpg on the highway. For its size, weight and towing capacity, the fuel economy of the Escalade is a strong point that helps it to stand apart from some of its rivals in the large SUV category.

When compared to non-SUVs, the Escalade does not boast an impressive fuel economy rating. Many smaller sedans and coupes have better fuel economy than the Cadillac Escalade.

This year's Escalade is available in four trim levels: standard, Luxury, Premium Luxury and Platinum. All trims are equipped with the same power train though four-wheel drive is an additional upgrade option for $3,000. All trims can also be upgraded to an ESV extended-length model.

Those seeking the safest possible Escalade could be interested in the Escalade Luxury which for an additional $5,600 offers a suite of advanced driver assistance and safety upgrades which are not available in the standard trim.