Powertrain: The base powertrain is a 193-horsepower, 2.5-liter four-cylinder engine paired with front-wheel-drive and a nine-speed automatic transmission. 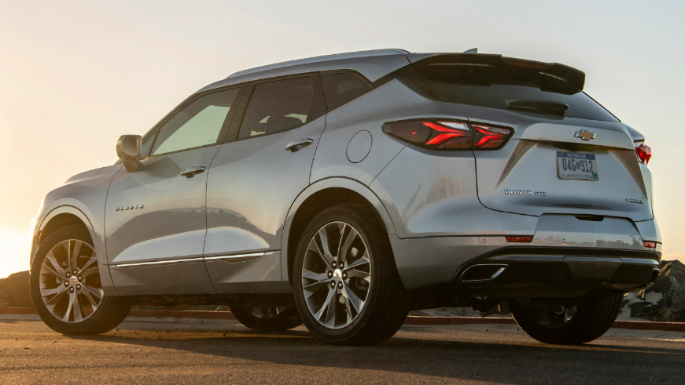 The 2020 Chevy Blazer is a midsize SUV with two-row seating that separates itself from the crossover SUV market thanks to its unique styling. What could have just been a plain-Jane vehicle has been given a sportier look thanks to Camaro-inspired touches both inside and out. Despite the cool factor of edgy styling, the sloping roofline comes at a cost to the rear headroom, minimizing the rear passenger area.

The Camaro's influence also rubs off on the Blazer's performance, especially if you opt for the available V6 engine. The deft handling and speedy pickup of the Chevy Blazer help to make up for the underpowered base engine.

Updates to the 2020 version of the Blazer includes smaller changes, like the ability to deactivate start/stop, a new trailer hitch guidance system, and two new shades to the color lineup.

When compared to other crossover SUVs, the sporty-styling of the Blazer puts it up against the Ford Edge and Nissan Murano, but the lack of rear passenger headroom gives other competitors, like the Hyundai Santa Fe and Honda Passport, a clear advantage. 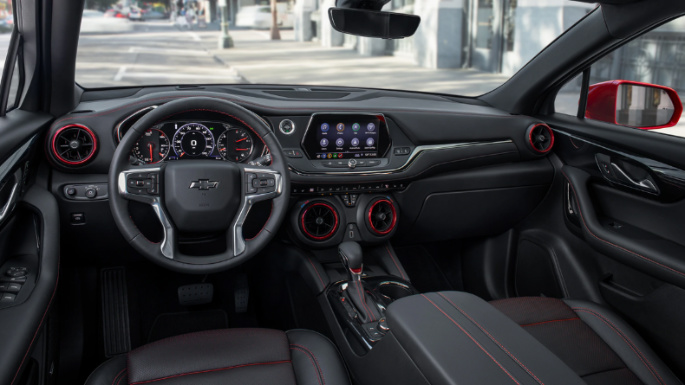 Despite a four-star rollover rating and the absence of some standard safety features, the NHTSA rated the Chevy Blazer five out of five stars; the IIHS gave the SUV a rating of 'Good.'

The Blazer features standard safety amenities like HD rear vision camera and seven airbags, including dual front, front side, and all-round head curtain protection. Other safety features are only standard in higher priced models. Key safety features include adaptive cruise control, lane-keep assist, forward-collision alert with automatic braking and pedestrian detection, but some, like automatic emergency braking and blind-spot monitoring, are only available with the RS and Premier models.

Another available safety feature of the Blazer includes Safety Alert Seat, a system that will vibrate the driver's seat and activate other safety warnings if it detects the driver becoming drowsy behind the wheel. 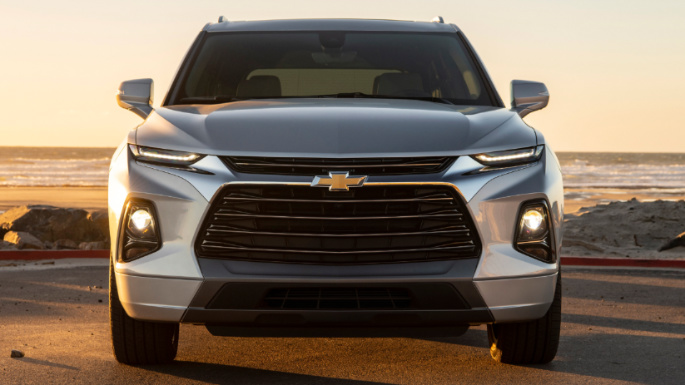 Drivers are better off skipping the lower base models and heading straight for the mid-tier models on the Blazer lineup. To add any redeemable value to the starting base models, drivers need to start adding available features, which can add up in a hurry. The key to getting the best value of the Chevrolet Blazer is to go straight to the 2LT.

At $33,295 versus the starting LT $28,800, the 2LT model offers the best value in the lineup, since upgrading to the V6 is only $500. Choosing the 2LT gives you the turbocharged 2.0-liter engine and the Chevy Safety Assist Package.

Some drivers might even want to splurge for the RS, coming in around $40,600, just to take advantage of the features of the 2LT and 3LT, but they'll add automatic emergency braking, a heated steering wheel, and 20-inch wheels. 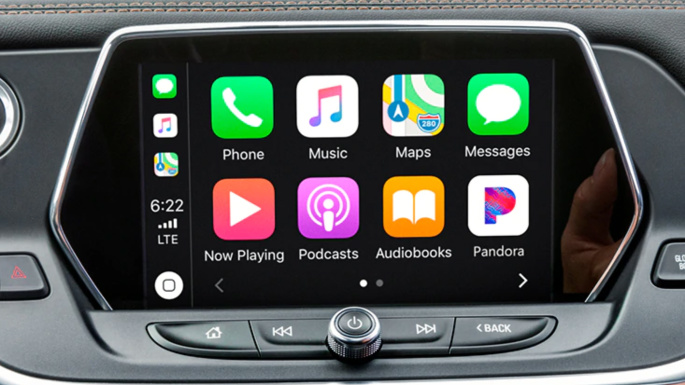 An 8.0-inch touchscreen with Apple CarPlay and Android Auto capability comes with every Blazer model as well as 4 USB ports, a six-speaker audio system with Bluetooth audio streaming. Even though the interface is easy to use, a rotary controller would make the system more user friendly. 2 USB ports are available in the rear, and a 120-volt outlet is available on certain models.

As with the safety features, the tech features are only available on the more expensive Chevy Blazer models. The Sound and Technology Package, available on the 3LT, includes a 4G LTE mobile hotspot, an eight-speaker Bose audio system, a digital rearview mirror, and a surround-view camera. 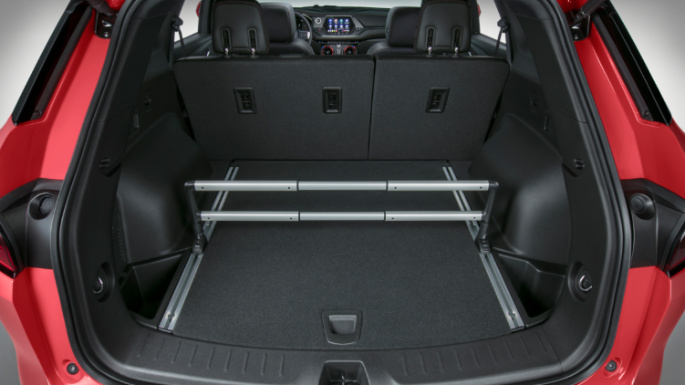 The Camaro-inspired styling of the Chevrolet Blazer takes a toll and cargo space available in the Blazer. Despite prioritizing style over substance, the Chevy Blazer still has 31 cubic feet of cargo behind the sliding second row, and when the seats are folded down, the space increases to 64 cubic feet.

There are tiny but clever storage spots for small items throughout the Blazer's cabin. Ledges on front door panels can fit smartphones, and the center console offers a handy cubby for bags or a purse. But the storage solutions in the rear are less ideal, despite the floor-mounted rail system. The rear small door pockets are narrow, and the center console, despite offering a bin, lacks clever organization.

Opting for the RS and Premier trim levels will add a programmable power liftgate.

The Ford Edge provides more rear space for passengers, and the Honda Passport cargo space is more than 100 cubic feet. Again, the sloping roofline compromises the rear passenger headroom. Still, the Blazer has enough passenger and cargo space to be a reliable SUV. 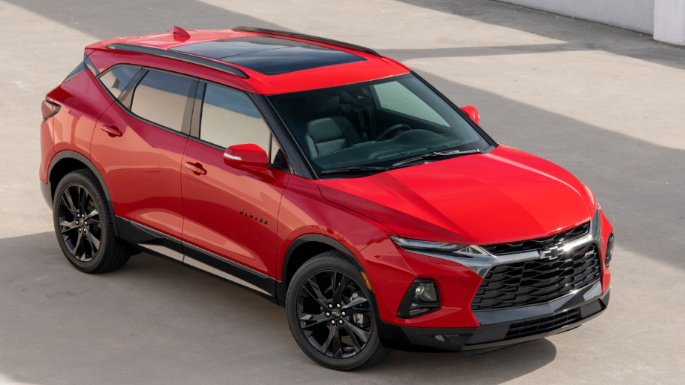 The Blazer infotainment system is easy to read and navigate. The front seats aren't the most comfortable or supportive, but the back seat cushions are comfy and offer plenty of legroom on long trips.

As mentioned before, the Camaro-inspired styling often interferes with the interior function of the Blazer, allowing only two adults to sit comfortably. Even though textured fabric upholstery is standard for the base trim levels, the Blazer dash adds hints of Camaro styling with leather and aluminum accents as well as a leather shift boot.

The RS and Premier trim levels come with 20-inch wheels, with the option to opt for 21-inch. Overall, the Blazer Camaro-inspired touches give it an edgier styling over the Ford Edge or Honda Passport. 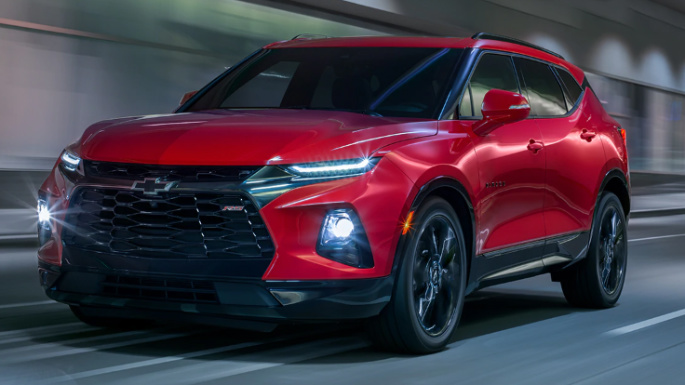 The Chevy Blazer base 2.5-liter engine and the two optional engines are each paired with the same nine-speed automatic transmission.

The standard engine offers capable performance, but the low horsepower makes it difficult to match the Blazer's weight. The optional 2.0-liter turbo engine makes up for some of this deficiency, but it still lacks the outright grunt of the larger V6.

That V6 offers more impressive acceleration that is faster than other crossover SUVs and boosts the Blazer's towing abilities.

The Blazer V6 engine is faster than its competitors; the performance-oriented RS is capable of going from 0-60 mph in only 6.3 seconds.

The Blazer has also been praised for its precise steering and smoother ride of the 18-inch wheels, compared to the 21-inch available wheels on the RS. The braking was also responsive and strong. 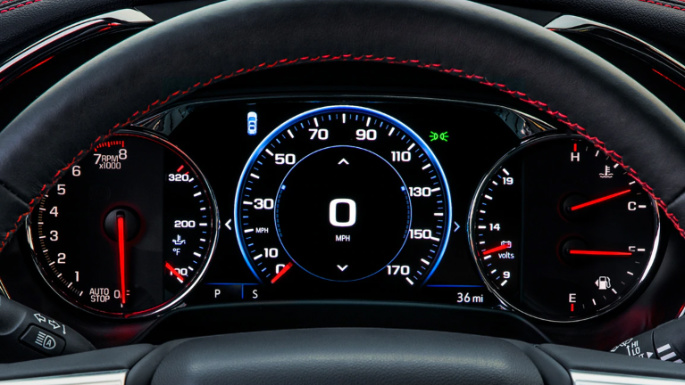 The Blazer's EPA-rated fuel efficiency for the front-wheel-drive version of the base 2.5-liter four-cylinder engine offers an EPA rating of 21 mpg in the city, 27 mpg on the highway, and 23 mpg combined.

The optional 2.0-liter turbo engine is rated at 21/28/24 mpg city/highway/combined in front-wheel-drive guise; adding AWD drops the combined and the highway figures down by one MPG each.

Finally, the more powerful 6-cylinder version is rated at 19 mpg in the city, 26 on the highway, and 21 combined. The AWD version drops city and highway MPGs down by one each, but the combined rating stays at 21 mpg. 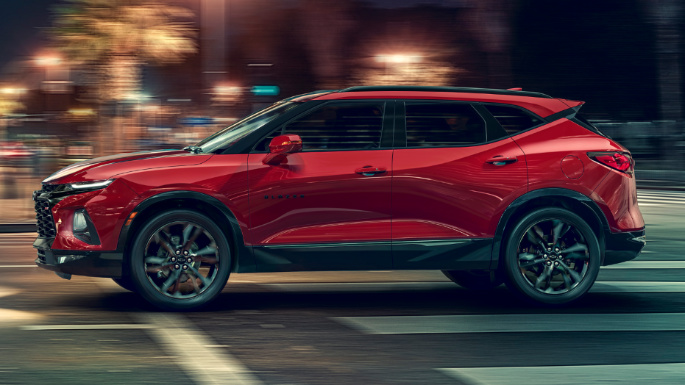 The base trim level L of the Chevrolet Blazer starts at $29,995, with an extra $1,995 in destination charges. The L standard engine is the 2.5-liter four-cylinder engine paired with front-wheel-drive and a nine-speed automatic transmission with 193-horsepower.

The LT starts at $33,495, with a few added features, like satellite radio, power-adjustable driver's seat, and tinted rear windows. Other available features are rear park assist and the Hit the Road Package that includes roof-rack cross rails and molded assist steps. Your interior will come with all-weather floor mats and the available Cargo Package to add a cargo net and organization. With the Convenience and Driver Confidence Package, you can much-needed safety features missing from the L, like lane change alert.

You can further customize your Blazer by choosing the available Black Accent Package or Midnight/SportEdition, both with a black mesh grille. The standard Bright Silver 18-inch wheels can be replaced with the Gloss Black aluminum wheels, or you can choose to upgrade to the 20-inch wheels.

In the 3LT, starting at $38,195, your interior will get comfier. Standard features include leather upholstery, power-adjustable front seats, heated outside mirrors, blind-spot monitor, and rear cross-traffic alert.

Beginning the top-tier of the Chevy Blazer trim levels, the RS, starting at $42,500, makes standard the available sporty styling from the LT. The 308-horsepower V6 engine is standard on the RS model and includes 20-inch black wheels, a black grille and black exterior trim, a programmable power liftgate, a 120-volt power port, and a heated steering wheel.

If we were picking a model, it'd be the 2LT, since we feel it's the best value in the lineup. Unlike some crossover SUVs that pack features into the lower trim levels, the Chevy Blazer is more cost-effective at the mid-tier range. The turbocharged engine, which gives the right amount of power to the Chevy Blazer's weight, becomes available at the 2LT. Plus, the safety features that give the Blazer a five-star rating from NHTSA are included with that model.

If you're looking for a V6, for increasing towing capability or better acceleration, the RS and Premier are also good choices not only because of the V6, but also the added standard tech and safety features.