Vehicle Type: The Chevrolet Colorado is a midsize pickup truck.

Powertrain: The Chevrolet Colorado is available with three engines:

A six-speed manual and an eight-speed automatic transmission are available. 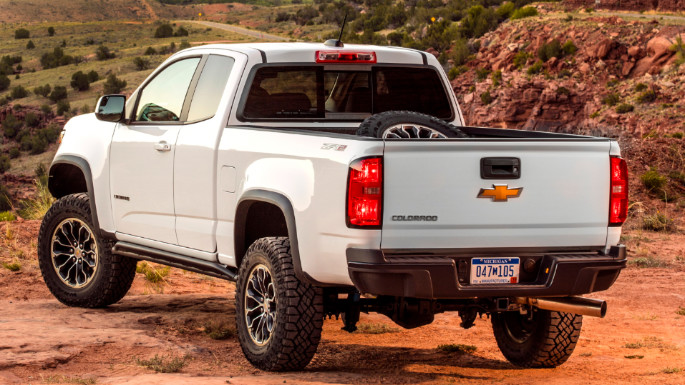 The midsize pickup truck market has exploded in recent years as the number of offerings has grown considerably. Ford re-entered the American market with the Ranger last year, but it's been the Colorado, its sister-truck the GMC Canyon, and the Toyota Tacoma's game for years.

The Chevy and GMC both offer a wide variety of customization and upgrade options that make them ideal for people that want a truck to fit their personality and needs. The Colorado has been refined over time to the point that it's almost as sophisticated and solid as the Chevrolet Silverado pickup, a larger, more expensive, and more capable truck.

The smaller Colorado has excellent towing abilities - up to 7,700 pounds with the diesel engine, and a flexible bed that can carry cargo exceeding its length.

The Colorado's powertrain options include a 200-hp 2.5-liter inline-four, a 308-hp 3.6-liter V6, and a 2.8-liter turbodiesel inline-four that makes 369 lb-ft of torque and 186 hp. The Colorado is targeted at buyers that want a high level of customization, a smooth ride, and notable off-road ability.

The 2020 Chevrolet Colorado is available in five trim levels: Base, Work Truck/WT, LT, Z71, and ZR2.

The available Bison package takes that intensity to a new level with a host of AEV off-road parts and special wheels. When combined with the torque-rich diesel engine, the Bison package makes the Colorado a formidable off-roader. It's above and beyond what Toyota offers for the Tacoma, and is comparable to the level of factory add-on insanity that is typically seen from Jeep. 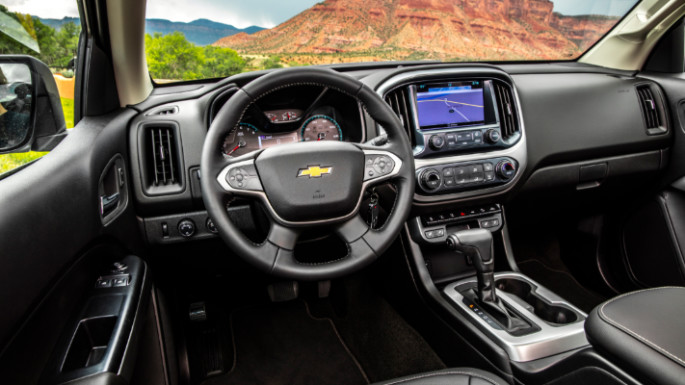 A Safety Package is available for the LT and Z71 trims that includes forward collision alerts, lane departure alerts, and rear park assist. 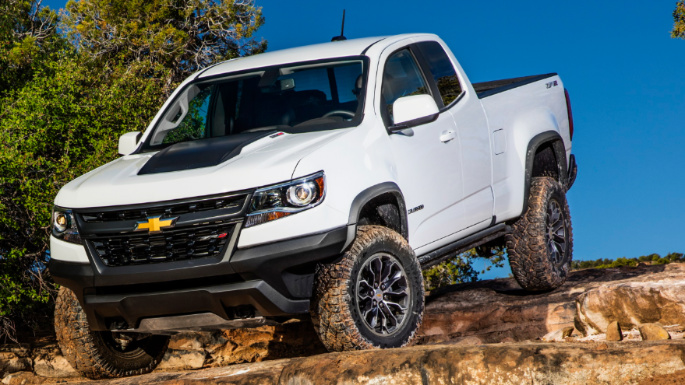 In higher trims, the Colorado's fatter sticker price clashes with that of the larger and more capable Chevrolet Silverado. It's a hard sell at that price.

Middle trims offer the best value, as the price tag is reasonable, and the list of standard features is much longer than the lowest trims. This level of available customization and choice is a big selling point for the Colorado against its rivals from Toyota and even Honda.

The base model is just that and is more oriented towards fleet use or buyers who just need the most basic transportation that's also functional.

Even in higher trims, there's more hard plastic and cheap-feeling materials than we'd like to see. The Colorado falls roughly in the middle of the pack when compared to its competitors, as it's "nice" enough to stand up to newer rivals like the Ranger but not refined enough to beat the Ridgeline for daily driving.

The Colorado has been noted as being able to handle significant abuse, both on- and off-road, which makes it an excellent choice as a go-anywhere, do-anything vehicle. 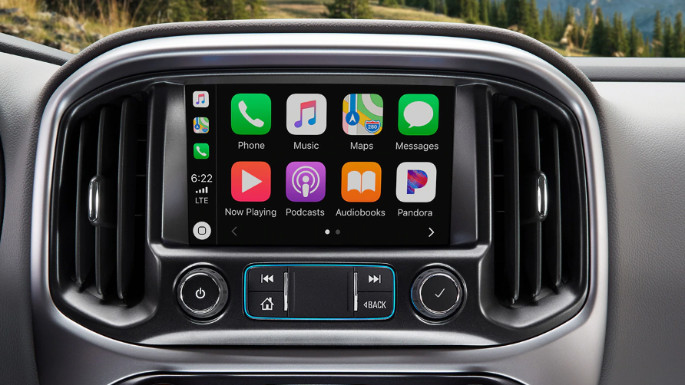 Chevrolet's Infotainment 3 system is a pleasure to use. It's colorful, easy to understand, and intuitive. The available eight-inch screen is bright and easily viewable from wide angles and almost all lighting conditions.

Standard features for most trims include Apple CarPlay and Android Auto, two USB ports, and a six-speaker sound system.

The Colorado also comes with an AT&T Wi-Fi hotspot, Chevrolet Connected Access, and GM OnStar. Subscription charges may apply, and service may not be available in all areas. 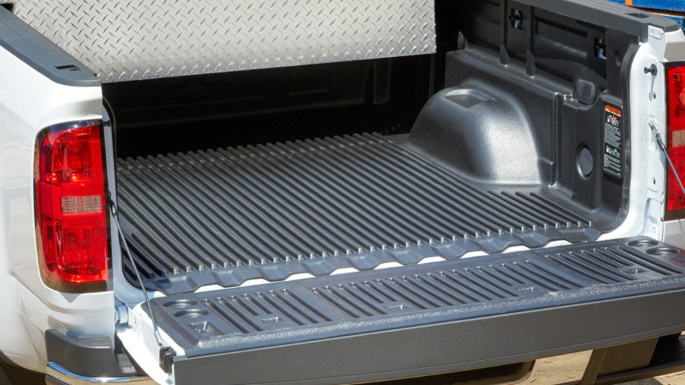 The Colorado's high degree of customization and the wide selection of bed and cab sizes make it possible for buyers to pick the exact truck that best meets their needs.

The Colorado's bed features corner steps, cargo tie-downs, and the ability to carry items up to eight feet long with the tailgate down. When equipped, the easy up/down tailgate makes using the bed much easier.

Inside, the Colorado lacks small items storage. Cubbies are small and awkwardly placed, and the center console storage area should be much larger. The back seat does not fold completely flat, which makes loading cargo in the cabin awkward.

In configurations with a rear seat, space is severely lacking. This includes head and legroom, as well as storage spaces. The rear door openings are small, and the truck's ride height makes it difficult to load car seats, cargo, and even pets. 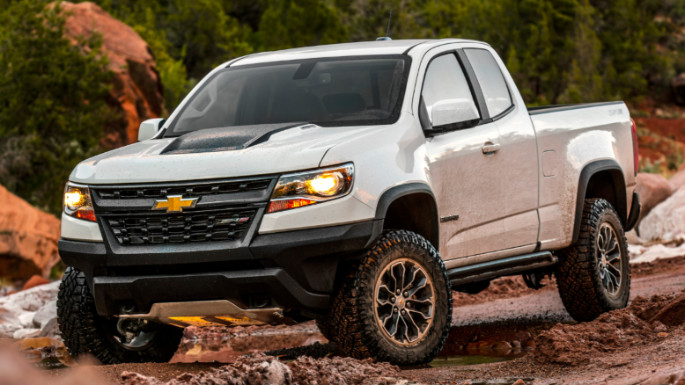 The Colorado has adopted the sharper, busier style that Chevy gave to the larger Silverado pickup last year. This includes a large grille with a prominent Chevrolet logo, large headlights, and a highly visible skid plate on some models.

Though it's a small truck, the Colorado has an imposing stance and strong lines that make it look muscular and aggressive. Long lines and a high beltline make the truck look larger than it is, and the sharp styling draws attention to prominent areas up front and on the rear.

The front seats are set high in the cabin, which opens up a large viewing area and excellent visibility out front. The truck's large pillars and smaller side windows make side visibility problematic in some situations.

The Colorado's cabin prioritizes space for front-seat passengers, which makes sense, but the result is a back seat that is uncomfortable for most people. Children and shorter adults will find a comfy spot in the back.

All controls, buttons, and displays are driver-oriented and easy to reach from the driver's seat. Everything is well organized and easy to recognize when the truck is in motion. 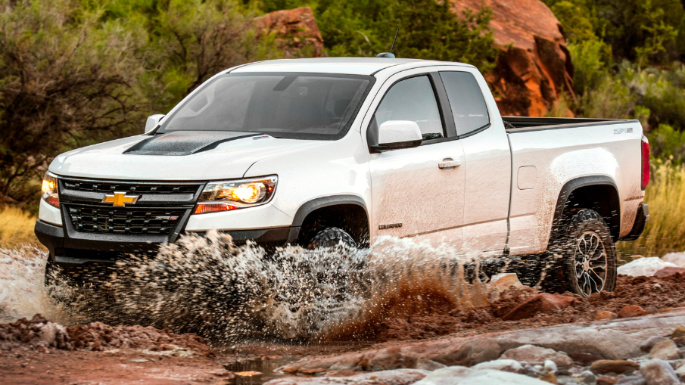 The V6 engine provides lively acceleration and a strong sound when the pedal hits the floor. Acceleration has been clocked at around seven seconds from 0 to 60 mph. The V6 matches well with Chevy's new eight-speed automatic, as there's never an occasion where the gearbox is hunting for gears. In towing scenarios, the transmission finds its gear and downshifts readily. The same can't always be said for leisurely drives on flat roads, where the gearbox is slow to downshift for better acceleration.

The Colorado's ride is comfortable and confidence-inspiring. Body roll is well contained by the suspension system, but some slips through on the curviest roads. That said, the Colorado handles its business well when the roads twist up.

Off-road, the Colorado is a mixed bag. On the one hand, the ride height and off-road tires for some trims make the truck an off-road star, but awkwardly-placed bodywork like the front air dam limits the approach angle. The good news is that it can be removed in about a half-hour if necessary. 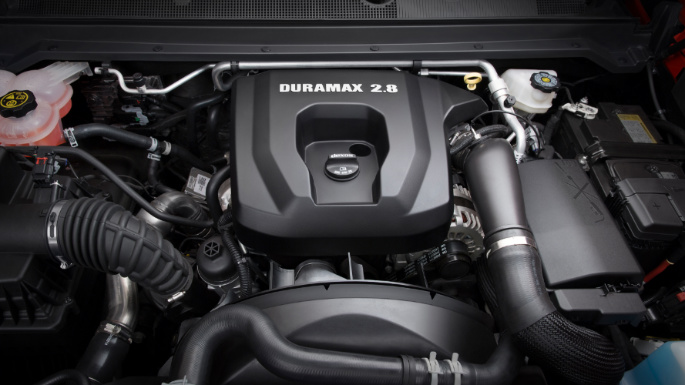 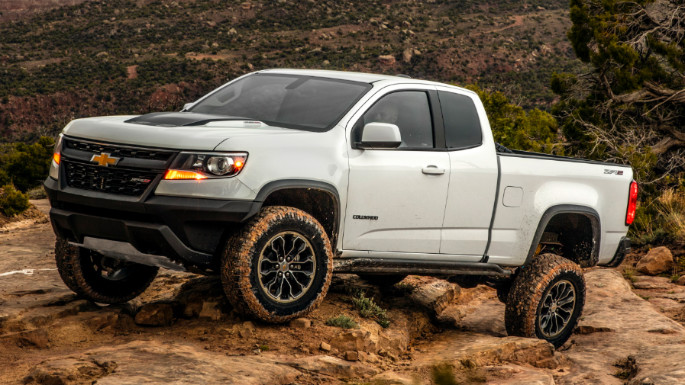 The Colorado ZR2 has a starting price of $42,990 after the $1,195 destination charge. It comes with a Multimatic suspension damper system, an off-road front fascia and bumpers, a lift kit, and the options list that comes with the Z71.

If it were our money buying a Colorado, we'd head for the Z71 trim. It's more expensive than many of the other versions, but its off-road capabilities and the long list of options make it a compelling choice. The larger tires and off-road stance also make the Colorado look much more imposing and muscular. The Z71 upgrades add considerable off-road ability for not a lot more money. It puts the Colorado on the level of the Toyota Tacoma TRD, which is high praise.