The Dodge Ram 1500 is one of the longest-standing members of the half-ton truck segment and one of the “big three,” made up of, the Ford F-150, and the Chevrolet Silverado. Even though many consider the Silverado as the F-150’s main rival, the Ram 1500 has endured and has firmly inserted itself into America’s full-size pickup truck culture and has recently topped the Silverado in sales.

Similar to other trucks that have been around for a long time, the Ram 1500 has gone through several variations and name changes before evolving into the truck we see today. Dodge made pickup trucks for years before the ‘Ram’ name came into existence, but its success has made it one of the most recognizable names in the automotive industry. 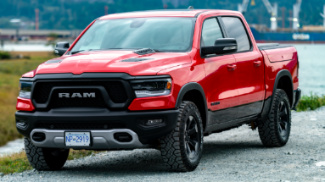 The Ram 1500 underwent another generational change and was completely redesigned for the 2019 model year. The 2019 model year Ram 1500's lost almost 225 lbs in overall weight by utilizing new sheet metal technology to lighten and strengthen the Ram line. The 2021 model year catapulted the Ram 1500 to first place in light-duty full-size pickup trucks. The current 2021 model year scores extremely well in interior comfort and is rated to have the best cabin and ride quality of all half-ton pickups for the year.

The base manual transmission was dropped for this generation, as was the regular cab, which Ram renamed the Ram Classic and offered as a separate, cheaper model. Extended and quad-cab (four full doors) variants were available with either the 5.7-foot or 6.4-foot truck bed.

Styling was again updated to include smoother lines with better airflow, though the truck was still unmistakably from the Ram truck lineage.

These fifth-generation Ram 1500s are offered with either a 3.6-liter V6 engine or a 5.7-liter V8; both offered with a mild-hybrid eTorque system and come standard with an eight-speed automatic transmission. Both two and four-wheel drive (4WD) variants are offered.

The 2021 North American International Auto Show debuted the all-new Ram 1500 TRX. The TRX is Ram's response to the Ford F-150 Raptor, Chevrolet Silverado 1500 Trail Boss, and the GMC Sierra 1500 AT4. All of these truck models are heavy-duty off-road-focused variants of each companies base truck. The Ram TRX is only offered in the crew cab configuration with a towing capacity of 8,100 lbs and a payload capacity of 1,404 lbs. The TRX is outfitted with an intercooled supercharger premium V-8 Hemi engine producing 702 horsepower. 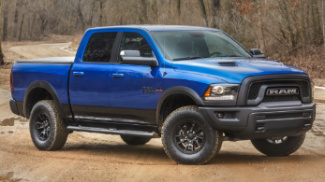 The fourth-generation Ram 1500 was released as the Dodge Ram for 2009 and then saw a significant redesign for the next model year. Though still under one parent company, Dodge and Ram split into two companies for 2010. Ram became the truck brand for its parent company Chrysler Group, while Dodge focused on sedans, minivans, and SUVs.

Nomenclature aside, this Ram 1500 was built on an entirely new platform. The ST, SLT, TRX4, Sport, and Laramie trims are carried over from the previous generation model. Base model Ram's were built in Mexico, while all other models are continued to be made in the USA in Michigan.

Two and four-wheel-drive options continue to be offered with either a single cab or quad-cab layout.

A short 5.7-foot, 6.25-foot, or long 8-foot bed layout is offered depending on the selected cab option.

Ride comfort was prioritized for the fourth generation as Fiat purchased Chrysler and focused their efforts on making a Ram pickup with available features such as heated rear seats, power-adjustable floor pedals, and a rearview camera. The interior was also redesigned to be much more stylish and comfortable than in previous generations.

Ram made some mid-cycle changes to the Ram 1500 for 2013. They included a slight exterior restyling, optional air suspension, updated interior, updated U Connect infotainment system, a new eight-speed automatic transmission, and the edition of the high-efficiency HFE model. This was also the generation that experienced an alternator recall in all Ram 3500's.

The Ram 1500 Rebel, first available in 2016, debuted as a more rough-and-tumble body style of the Ram for more focused off-roading. The 3.0-liter EcoDiesel V6 made a return for 2018 as well as the addition of Apple CarPlay, Android Auto, and a 4G LTE hotspot as options. 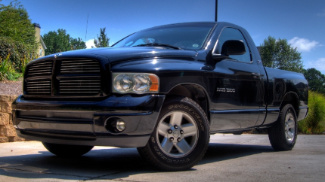 This third-generation Dodge Ram 1500 did not like a drastic departure from the previous generation, but it did have a more modern style with smoother lines and edges than its predecessor and also offered heavy-duty Ram 2500 and 3500 models.

Despite this styling evolution, there were significant changes to the Dodge Ram pickup's underpinnings and interior, including an all-new frame, suspension, and engine options. This Ram also added the option of side curtain airbags, the first full-size truck to offer such a feature.

Two- and four-wheel-drive continued to be available with an independent suspension replacing the live axle in four-wheel-drive examples. The extended cab was updated to a true four-door quad cab, and the single cab remained available.

A 6.25-foot truck bed and 8-foot bed were made available for four-door quad-cab models, while single cab models were only available with the shorter bed option.

The 3.7-liter V6 engine was carried over from the previous generation but now produced 215 horsepower.

The longstanding 5.9-liter magnum V8, available since the second generation was available for only the 2002 model year when it was replaced with a 5.7-liter Hemi V8 that produced 345 horsepower and 375 lb-ft of torque.

A refresh for the 2006 model year included a slight revision of the front fascia and the addition of the “mega-cab”, a larger version of the quad-cab layout that featured 22 extra inches of space and the 6.25-foot truck bed. Further updates included the addition of technology features like navigation, Sirius satellite radio, and a rear-seat DVD entertainment system.

Several special-edition Rams were available at various times during the third generation and included the Power Wagon, Daytona, and SRT-10, a well-loved version of the Ram 1500 that used the 8.4-liter Dodge Viper engine. Production for this hot rod model ended in 2006, but it held the world record for the fastest production truck for two years. 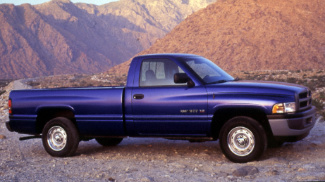 The second-generation Ram was when Dodge officially added the ‘1500’ designation and is perhaps considered the most famous and recognizable of the Dodge Ram brand. Designers of the Ram modeled its look on a “big rig” semi-truck to make it look more durable and tough, and as a result, the Ram 1500 won the Motor Trend Truck of the Year award and became a huge success with the public.

In 1992 and 1993, just before the release of this second generation, Dodge had updated its engines; these carried over into the 1994 model year.

A new 8.0-liter V10 engine and the Cummins turbodiesel were all moved from the 1500 lineup to the larger 2500 and 3500 Ram models for the second generation. The three-speed automatic transmission was dropped, leaving the choice of a four-speed automatic or five-speed manual transmission.

Two- and four-wheel-drive continued to be offered on the Ram 1500, along with the choice of a long 8-foot bed or shorter 6.5-foot truck bed.

Trim levels included the Work Special, LT, ST, and SLT, with the Work Special being extremely minimal and better suited for fleet needs. The top-of-the-line SLT received a more car-like and comfortable interior with features such as power windows, power locks, AM/FM stereo with a cassette player, and air conditioning.

A mid-cycle refresh for 1998 included slight exterior cosmetic updates, dual airbags, OBD II, and the addition of a quad-cab with suicide doors for easier rear-seat access.

In 2000, Dodge offered the option of a six-speed manual transmission. 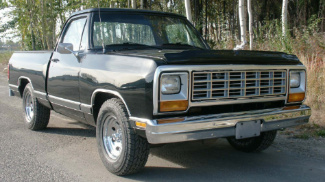 The Ram 1500 first made its official debut when Chrysler’s then-CEO, Lee Iacocca, officially put his stamp of approval on the name and logo for the 1981 model year; this new model replaced the Dodge D Series trucks.

These first-generation trucks were offered in both two-wheel-drive and four-wheel-drive layouts with the letters “D” and “W” designating their respective drive types.

They were offered a long 8-foot bed or a shorter 6.5-foot truck bed as well as short, extended, and crew cab options.

Other features offered in the first-generation Rams included air conditioning, power locks, power windows, a ram hood ornament, and an AM/FM radio with a cassette player.

Mid-cycle updates were few but significant. Extended cab models were dropped for 1982, and the crew cab was discontinued for 1985.