The Corvette C4 is the fourth generation of the iconic sports car from Chevrolet, produced from 1984 to 1996. The car was designed by Dave McLellan, who had replaced Zora Arkus-Duntov as Chevrolet's chief designer in 1975.

The C4 marked an important new stage in the evolution of the Corvette; it had a different chassis than the C3, and its body panels and bumpers were made of molding plastics instead of fiberglass. It also had a more streamlined style and it reintroduced the convertible after an 11-year hiatus.

The Corvette C4 was a major step toward the look and feel of modern models.

Departing From the Stingray Design

The Corvette C3 that the C4 replaced was based on the Mako Shark II concept car, itself inspired by the sleek body and long snout of the shortfin mako shark. It featured a highly stylized design with a sporty, swooping front and "sugar scoop" roof treatment.

By contrast, the C4 had tighter, more understated proportions and downplayed its sports car lineage. In departing from the classic "Stingray" design of Vettes from the 1960s, the C4 embraced a more futuristic sensibility.

Unlike the body-on-frame construction of earlier Corvettes, the C4 was built with a uniframe. Not to be confused with a unibody assembly, in which the exterior body panels are structural members, the uniframe combines critical elements of the car, such as the windshield frame, into one welded unit.

The C4 also replaced the coil springs in the C3's front suspension with a much lighter transverse fiberglass mono-leaf spring. Finally, instead of the T-tops of its predecessors, the C4 features targa tops.

The Release of the C4 Corvette 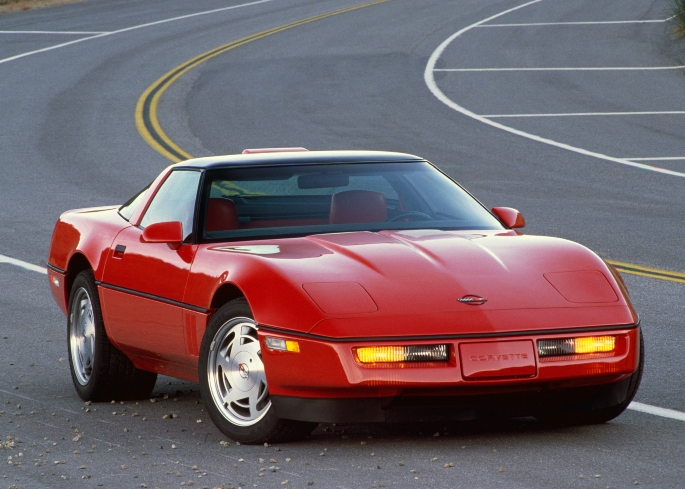 From 1963 until 1984, the year in which the C4 came out, the Corvette's design had remained largely unchanged. The C3 had even inherited the same chassis and suspension design as its predecessor.

Despite a year-long delay due to quality issues, the C4's overhaul of the Corvette was a financial success, with sales figures for this line of cars doubling after the C4's release. A total of 51,547 C4 Vettes were sold in 1984 for around $21,800 each.

Buyers appreciated the car's modern amenities, such as the instrument cluster with a digital LCD and the 16-inch 50-series Goodyear Gatorback tires.

The 1984 model also featured the small-block L83 V8 engine from the 1982 Corvette, which includes the short-lived throttle-body Cross-Fire fuel injection. It put out 205 horsepower and 290 foot-pounds of torque.

Due to a lack of support for the fuel injection, some modern car collectors are critical of the 1984 Corvette. However, 1984 C4s are some of the most affordable collectibles on the market, with some well-maintained units selling for as low as $6,000, as of 2019.

The second half of the 1980s saw a steady refinement of the C4, especially when it came to the vehicle's power. In 1985, the controversial L83 V8 engine was replaced with a more powerful and fuel-efficient L98 featuring the tuned-point fuel injection found in Camaros and Firebirds. This engine was capable of 230 horsepower and 330 foot-pounds of torque, and the car's top speed is 150 mph.

At the time, this speed was matched only by Buick Grand Nationals and modified Ford Mustangs. The suspension for the 1985 C4 was also softened by 25 percent. Chevrolet sold 39,729 units for an average of $24,891 each.

This was also the year in which Chevrolet introduced the Pass Key I passive anti-theft system. This system only unlocked the car doors if it detected one of 15 electrical resistance values produced by a special pellet in the car keys. However, car thieves quickly learned how to bypass the system. 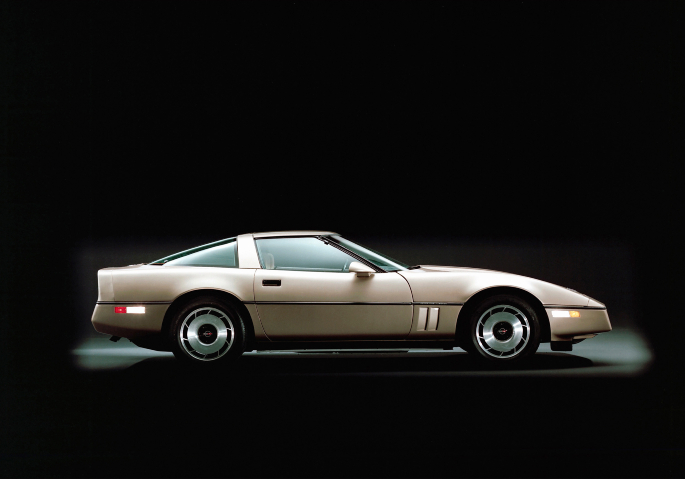 In 1987, the Corvette C4's engine gained roller hydraulic lifters to boost its horsepower to 240. Customers who wanted to supercharge their engine could buy the $19,999 B2K twin-turbo engine conversion, supplied by Callaway Cars in partnership with Chevrolet, to increase the engine's horsepower to 345 and its torque to 465 foot-pounds. The result was one of the fastest cars of its time.

A specially modified C4 known as the Callaway SledgeHammer reached a top speed of 254 mph. C4 Vettes with twin-turbo engines are collector cars, as only about 500 exist.

C4s also underwent suspension changes and a new wheel design in 1988. The emergency brake was also moved toward the rear of the car for easier entering and exiting. In 1988, 22,789 C4s were sold. 1988 was the last year the Doug Nash 4+3 transmission was available. This transmission combined a four-speed manual with an automatic overdrive on three gears. The ZF six-speed manual replaced the 4+3 in 1989. Although the ZF featured no improvements in power or efficiency, it was more expensive. In 1989, 26,412 C4s were sold at a base price of $32,045. 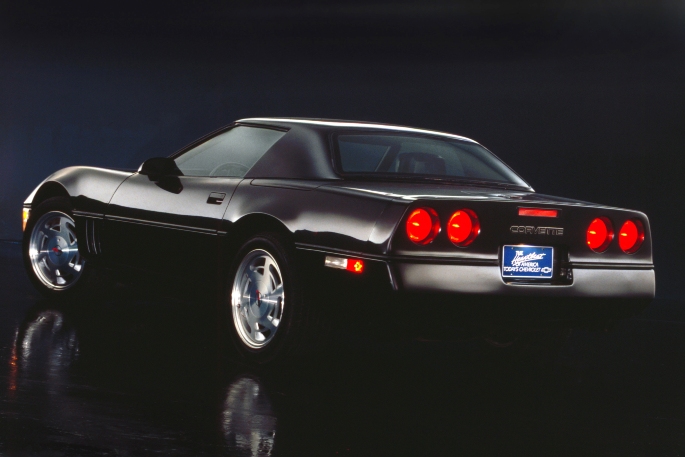 With the help of Group Lotus, a UK-based engineering consultant, Chevrolet sought to produce the fastest production car in the world.

The result was the ZR1, a Chevrolet Corvette C4 option package released in 1990, which broke the record for the 24-hour, 5,000-mile land speed, achieving speeds of 175 mph.

1992 saw much larger changes. Most notably, the LT1 V8 replaced the L98, delivering 300 horsepower and 330 foot-pounds of torque, plus the short-lived optically triggered Optispark ignition system. 1992 also witnessed the one-millionth Corvette ever made. The price for a standard C4 rose to $33,635, and 20,479 of the cars were sold.

In 1993, Lotus helped Chevrolet modify the C4's valvetrain, exhaust system and aluminum cylinder heads to improve power and torque. Passive keyless entry was added to all models as well, and an exhaust re-circulation system was introduced to make controlling emissions easier. This model year also saw the release of the 40th Anniversary C4, featuring ruby metallic paint and ruby leather seats. At a base price of $34,595, a total of 21,590 C4s were sold in 1993.

1994 didn't see many changes. The base price rose to $36,185, a passenger airbag was added, and the LT1 engine received a mass airflow sequential fuel injection. In all, 23,330 Chevrolet Corvette C4s were sold.

1995 was similarly uneventful. It saw a second-generation Optispark ignition system and some exterior restyling. The car cost $36,785, and 20,742 were sold.

1996, however, was an important year for the Chevrolet Corvette C4, as it was the vehicle's last year of production. An optional LT4 engine was produced, delivering 330 horsepower. Plus, an optional real-time damping system was available, which monitored the road to reduce vibrations.

The 1996 C4 also debuted Chevrolet's OBD II onboard diagnostics system. In addition, Chevrolet released the Chevrolet Corvette Grand Sport to celebrate the end of this generation of Corvettes. Inspired by the Grand Sport of 1963, this Grand Sport came exclusively in Admiral Blue with a white stripe and featured black wheels and bold red hash marks on the driver's side wheel arch. Only 1,000 Grand Sports were made: 190 convertibles and 810 coupes.

With its streamlined design and a slew of new features, the Chevrolet Corvette C4 was a bold leap into modernity. The C5, released in 1997, continued the trend, opting for a hydroformed box frame and a rear-mounted transaxle assembly. Today, the C4 is perhaps best known for its spate of offshoots and variations, many of which have become collectibles.

The Corvette C4 is the fourth generation of the iconic sports car from Chevrolet, produced from 1984 to 1996. The car was designed by Dave McLellan, who had replaced Zora Arkus-Duntov as Chevrolet's chief designer in 1975.

The C4 marked an important new stage in the evolution of the Corvette; it had a different chassis than the C3, and its body panels and bumpers were made of molding plastics instead of fiberglass. It also had a more streamlined style and it reintroduced the convertible after an 11-year hiatus.

The Corvette C4 was a major step toward the look and feel of modern models.

Next Up: Corvette C5