The 2019 Chevrolet Impala is the 10th generation of the car; it debuted in 2014. This Impala was the first North American car to earn Consumer Reports’ top score in more than 20 years. The Chevrolet Impala has a long history as a large American sedan with models released between 1958-1985, 1994-1996, and 2000-present day.

The Chevy Impala is a full-size, front-wheel-drive car. All trim levels feature sport and manual shifting options as standard features.

The 2019 Impala does not have any additional notable updates or changes when compared to the 2018 model. Despite this, many reviewers felt its spacious interior and cargo capacity, smooth ride, and high reliability ratings were enough for it to be a decent choice in the full-size sedan category.

Reviewers cited the Impala’s lack of original exterior features, lower quality cabin materials and underwhelming base engine as key reasons it is not considered one of the top choices in this category.

The 2019 Impala starts at $28,020 which is one of the lowest base prices of any comparable sedan. Reviewers praised the Impala's powerful V6 engine option, reliable handling, impressive trunk capacity, and an array of infotainment features.

(For comparison, the Buick LaCrosse starts at $29,570 and Toyota's Avalon starts at $35,500.) Other competitors include the Chrysler 300 sedan, Genesis G80 (formerly called the Hyundai Genesis) and the Nissan Maxima sedan.

The year’s Impala is available in three trim levels: LS, LT, and Premier.

The LS and LT models come standard with a four-cylinder engine. A V6 upgrade is available for an additional $1,095. The Impala LT can be upgraded with various packages ranging in price from $500 up to about $1,400.

Because this model year did not receive any major upgrades, it may be worth considering an older version since you'll be getting a similar car to the 2019 model but at a lower price.

Most Impalas since 2014, when the tenth generation was unveiled, have not had major changes.

Some reviewers felt the Chevrolet’s exterior design -- which has not been updated since 2014 -- lacks the sophistication and refinement that can be found in competing sedans. Its design is more conservative than some of its more progressive peers. 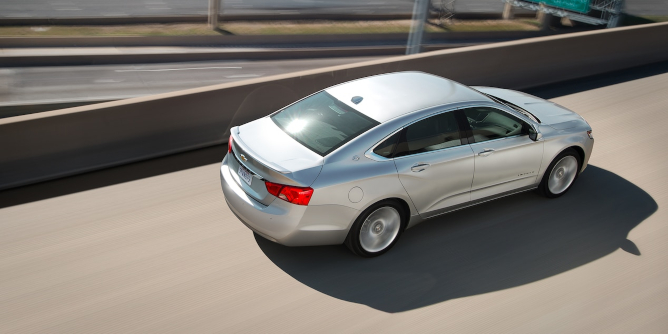 Other reviewers cited the Impala’s muscular exterior styling as a high point which helps it to stand out against the pack.

Finally, some reviewers expressed a desire that the interior of the Impala matched the smooth and refined look of the exterior.

The Chevrolet Impala comfortably seats up to five adults. It has one of the most spacious rear seats of any car in the category of large sedans. Even taller passengers should have plenty of space to stretch out and enjoy even longer trips. 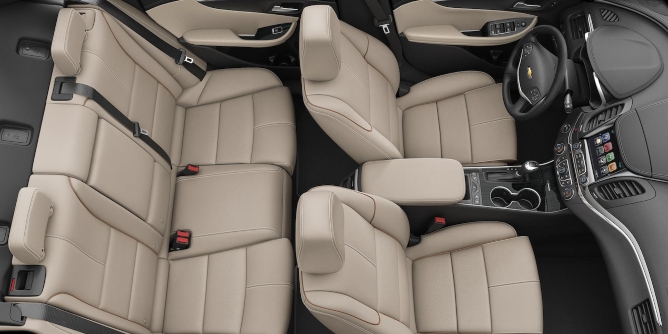 Some reviewers felt the Impala’s wide roof pillars limit the driver’s side-to-side view (they did not find any issue with the forward facing view out this car’s windshield). The front seats were found to be comfortable for most passengers. The rear seats also received praise as being better than average.

The Impala has cloth seats and a power adjustable driver’s seat as standard features. Optional upgrades to the interior include leather seats, heated and ventilated front seats, and a power adjusted passenger seat in front.

The Impala has two full sets of LATCH car seat connectors in the back seat. These connections were found to be very simple and easy for most people to use. 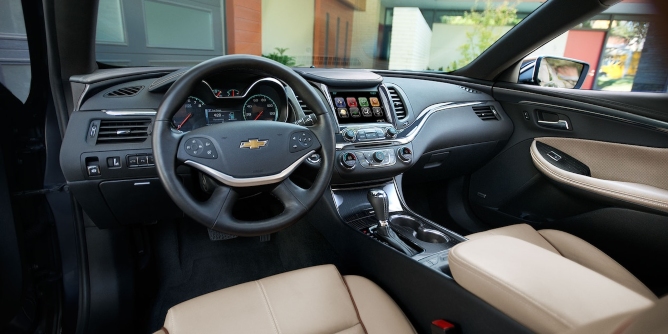 In general, most reviewers found the interior of the Impala to be comfortable and stylish. Some did feel that certain plastic pieces in the interior take away from a more luxurious look and feel.

With a near best-in-class 18.8 cubic feet of cargo space in the trunk, the Impala offers a lot of utility. Rivals such as the Buick Lacrosse and Toyota Avalon offer only 15 and 16 cubic feet of trunk space respectively. 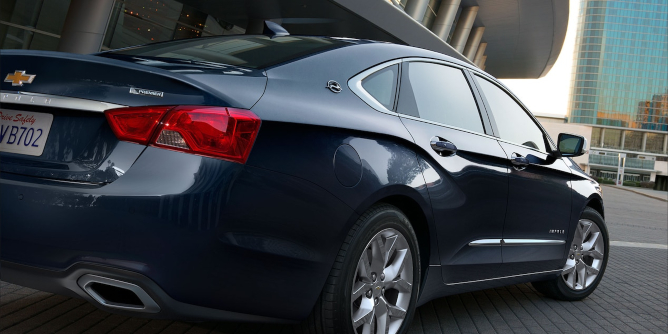 The Impala’s back seats also fold down to allow for carrying even larger items with ease. Reviewers felt the Impala’s wide trunk opening added an additional element of utility to this car.

The Impala received an above average predicted reliability rating of four out of five stars from J.D. Power and Associates. Reviewers cited reliability as a plus point for the Impala that might help it to stand out as a choice among its rivals.

Chevrolet offers a three-year/36,000-mile limited warranty and a five-year/60,000-mile powertrain warranty on all 2019 Impalas. This warranty is solid, though some competitors offer similar warranties. 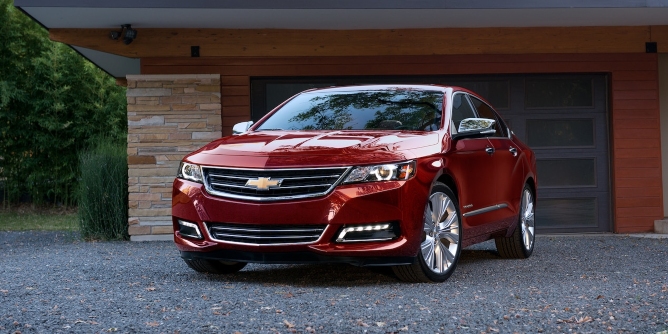 Many reviewers felt the technology and infotainment in the Impala to be a high point, helping to underscore the immense value this car offers. Standard features include a WiFi hotspot, satellite radio, USB ports, proximity key entry, push-button start capability, and the MyLink Infotainment system with an 8-inch touch screen infotainment system. 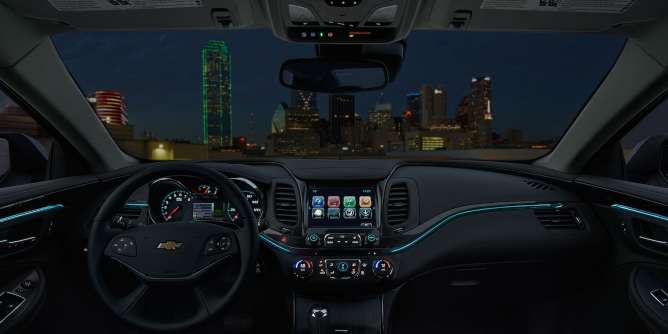 Some reviewers found the infotainment system challenging for driver control. Despite this, there are a variety of intuitive buttons and knobs which make changing volume or switching radio stations very simple.

Higher level trims of the Impala include options like dual-zone climate control, remote start, a sunroof, a 120-volt power outlet, a navigation system and an 11-speaker Bose stereo system.

The 2019 Chevy Impala has a perfect five-star overall crash rating from the National Highway Traffic Safety Administration (NHTSA). It performed optimally in front, side crash tests. It received four out of five stars in a rollover test.

The independent Insurance Institute for Highway Safety (IIHS) gave it the highest rating of 'Good' in four crash tests and the second highest rating of 'Acceptable' in a driver side small overlap front crash test. The IIHS gave the Impala’s headlights the lowest possible rating for forward visibility.

Many reviewers counted the lack of standard safety features aside from a rearview camera as a negative mark against the Impala. Despite this, upper trims are available with the active safety upgrades that include lane-departure warning, forward collision warning, adaptive cruise control, rear parking sensors, and rear cross traffic alerts. Still, those seeking the most advanced standard safety features may not be satisfied with the 2019 Chevy Impala.

Many reviewers felt the Impala’s base four-cylinder Ecotec engine to be bordering on too weak. Much of this is likely because the engine makes only 197 horsepower, a relatively small amount for a large car like the Impala. It's also one of the only models in this large sedan segment to offer a four-cylinder engine at all.

Since it's a larger and somewhat heavy car, the optional V6 with 305 horsepower is a better choice. Both engines come with a six-speed automatic transmission as a standard feature.

Because it shares some powertrain components with the Chevy Camaro, the Impala was found by reviewers to feel nimble, with predictable handling. But given its size and weight, the Impala won't be mistaken for a sports car.

Most reviewers felt the Impala offered a quiet and comfortable driving experience. The choice of upgraded 20-inch wheels was found to create a stiffer and louder ride.

Some felt that the Impala’s braking was uneven and less responsive than rivals. They also noted that the Impala had a longer than average stopping distance than other models it competes against.

With the standard Ecotec engine, the Impala receives an EPA fuel efficiency rating of 22 miles per gallon in the city and 29 miles per gallon on the highway. When compared to competitors such as the Toyota Avalon 22/32 and Buick LaCrosse 25/35, the Impala is not as efficient.

The 2019 Impala’s V6 engine upgrade receives a fuel economy rating of 18 miles per gallon in the city and 28 miles per gallon on the highway. The difference between the four-cylinder engine and the optional V6 engine is about $250 more in gas costs over the course of one year.

As we mentioned, the 2019 Chevy Impala comes in three different trims: LS, LT, and Premier. The LS and LT trim come standard with the four cylinder engine while a V6 is available as a possible upgrade.

The Impala Premier is only available with the V6 engine.

All models of the Impala have front wheel drive and a six-speed automatic transmission.

The base Impala offers a variety of features which help boost the model's value, especially with a starting price of just $28,020. Many reviewers felt the Impala LT with the Leather Package offered the best combination of options for the lowest price: leather seats, a heated steering wheel, heated front seats, and power adjusted passenger seat.

Regardless of trim, nearly all reviewers felt the V6 engine upgrade to be worth considering.

Because of its low base price compared to its rivals, reviewers also felt that the Impala Premier was worth considering. Even at $36,720, the consensus is that it offers a lot of features you would not find in a competitor for a similar price.

Overall, the Impala offers good value at all of its trims. Though some competitors might be better than it in certain categories, they likely cost substantially more. Because the 2019 Impala does not really have any meaningful upgrades that are not found on earlier models, consider a used Impala if trying to maximize value.

The Chevy Impala LT is priced at $30,520. This trim adds dual-zone climate control, remote start, a leather shift knob and steering wheel as standard features. A V6 engine is available for an additional $1,095. For $1,275, the Impala LT can be upgraded to include a sunroof and rear spoiler. The LT Leather package is priced at $1,195 and adds leather seats and an eight-way power adjusted passenger seat.

Some of these features require an upgrade to the V6 engine or the purchase addition of other packages.