Owning a sports car can be an expensive endeavor. Starting with the initial cost, and then continuing expenses like maintenance, gas, insurance and inevitable repairs. You may not be able to do much about accidents, but if you look at the used market, you can save a bundle on the initial cost of buying a sports car. Like any other vehicle, sports cars rapidly depreciate when you leave the lot, so looking for a used one makes financial sense in more ways than one. Let's take a look at some used sports cars that you can find for around and less than $30,000. 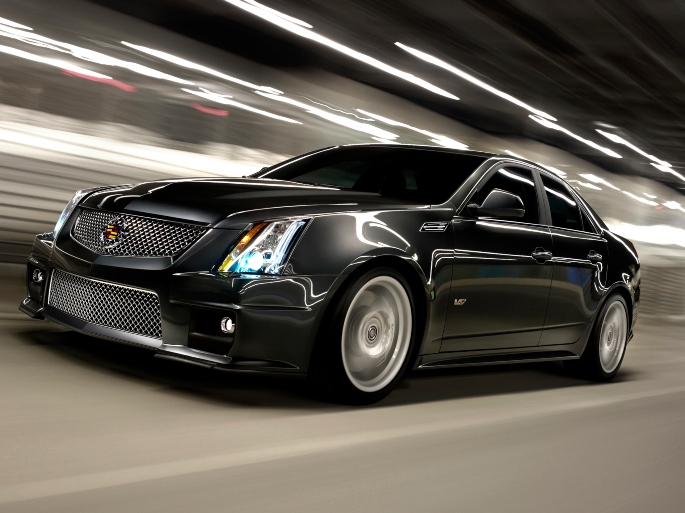 Regardless of the price point, the Cadillac CTS-V Coupe is one of the most energizing sports cars around. You'll be looking back at the 2012 and 2011 models specifically for that $30,000 price range. If you're able to find one, you'll be getting a supercharged V8 engine that puts out 556 horsepower, luxurious interior and sharp styling. You could also get a GM certified pre-owned warranty, depending on where you buy – which would take some of the sting out of ownership costs. It is one of the faster sports cars on the market with a 0-60 time of 4 seconds. Finding one around this price point might be a bit of a hunt though, as plenty of them are still hovering over $30,000 and close to $40,000, depending on options and mileage.

The Spyder and Maserati Coupe available at the $30,000 price point were produced between 2001 and 2007. They offered a 4.2-liter Ferrari and Maserati V8 engine, a six-speed manual transmission, a 0-60 speed of 4.9 seconds, a top speed of 177 mph and 390 horsepower. It's not the most modern car in terms of those specs, but part of sports car territory is a certain look, and the Spyder looks the part. The Maserati Coupe and Spyder are basically the same cars, but the Spyder is a convertible. When it comes to reliability, it's worth noting that the Spyder has had roof failure issues. However, it's also a more popular car vs. the Maserati Coupe. Like with the CTS-V, you could be in for a hunt as neither car had a big production run, and they're quite popular on the used market. 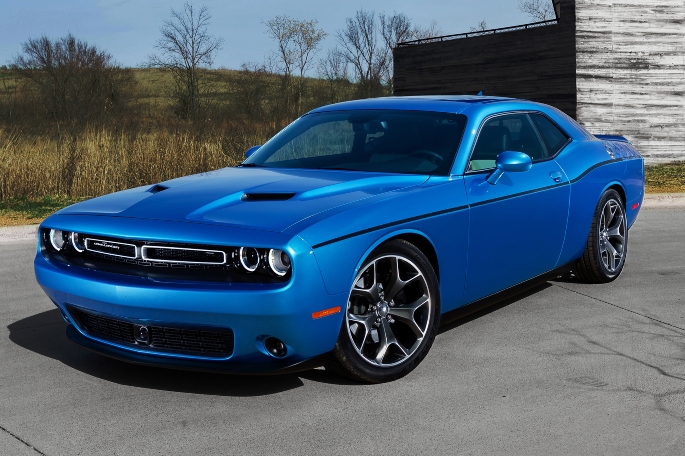 The Challenger between the model years of 2008 and 2015 offered muscular retro styling and a range of powerful V8 engine options. Horsepower in these engines ranged from 350 to 707. It was also reasonably competent in terms of reliability, having won the JD Power Initial Quality Study award. A $30,000 budget can cover a moderately wide variety of Challenger models, though you may have to look on the older end of the indicated model range. If you look at vehicles with higher mileage, you may even be able to snag a special edition or high-performance SRT model. 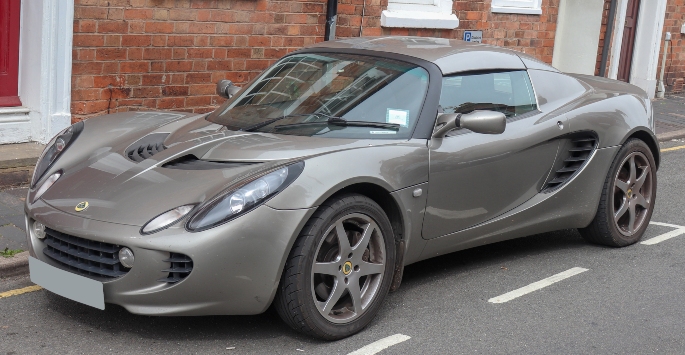 Produced between 2005 and 2011, the Lotus Elise offered a 1.8-liter Toyota four-cylinder from a Celica with 189 horsepower. The transmission was either a five or six-speed manual. The Elise was able to make 0-60 in 5.7 seconds with a top speed of 124 mph. Similar to the Maserati Spyder, the Elise may not have the most impressive stats compared to larger and more modern sports cars. But it's light and has a European sports car pedigree. The Lotus Elise's small size and a lightweight body gave it quick acceleration and handling that was more like a racing cart than an actual car. 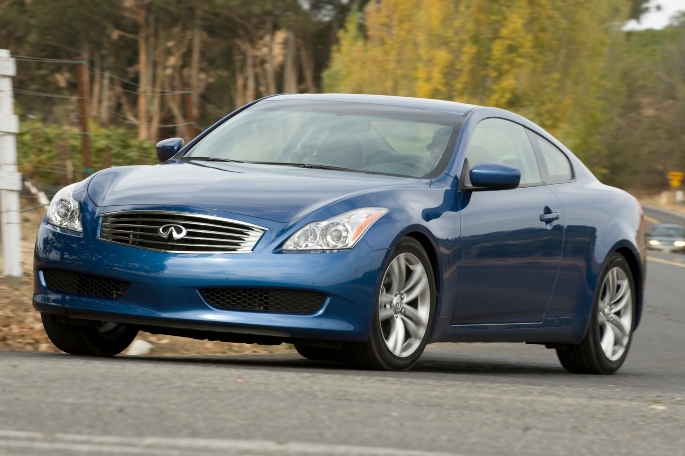 The G37 and Q60 are essentially the same cars with the latter nameplate simply being a renaming of the former as of 2013. This sporty car from Nissan's luxury brand is a great choice for car buyers with diverse preferences. There are many configurations for this car, including convertibles, coupes, manuals, automatics, base trims and fully loaded trims. You'll be looking at the 2008 to 2015 years for vehicles in the $30,000 range, but you'll still be getting a very reliable car with one of the best engines ever from the Infiniti line. This engine is a 3.7-liter V6 with 330 horsepower. The Q60 is now in its second generation, so the previous generation vehicles should continue to dip in price. 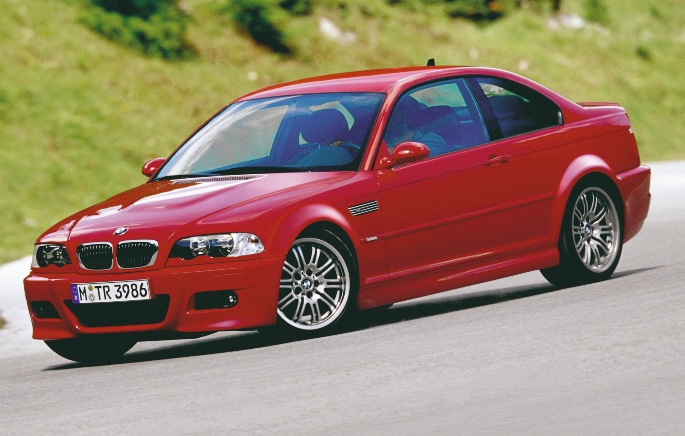 The BMW M3 produced between 2000 and 2006 was one of the most affordable and also one of the most iconic sports cars in recent years. The M3 has always been known for reasonable pricing combined with very competitive performance. The E46 generation highly improved on the previous car, the E36. The E46 offered a 333 horsepower 3.2-liter inline-six engine, which could make 0-60 in 5 seconds with a top speed of 155 mph. In fact, the E46 could reach a top speed of 170 mph if it weren't for the installed electronic limiter. In terms of the transmission, the traditional manual offered a more sporty feel vs. the SMG transmission. The main reliability problems with the E46 were internal electronics. Some noted trouble spots included random button failure and windows jamming up or down. If you're unable to find an E46 for the $30,000 price point, you can get similar performance with the previous E36. However, you'll likely be looking at higher mileage, and you'll especially want to get it thoroughly checked out before buying. 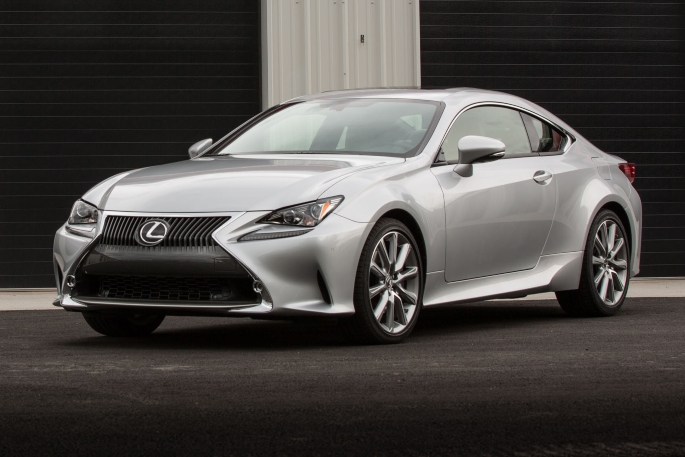 The Lexus RC came out for the 2015 model year, so it's still only in its first generation. The new 2020 RC has a starting MSRP of $64,750, but if you look at the 2015 model now, it's relatively easy to find one under $30,000 with not a lot of miles on it. The RC 350 comes with a 3.5-liter V6 mated to an eight-speed automatic transmission. The engine makes 306 horsepower and gets a relatively decent 26 mpg on the highway for the AWD version and then 28 mpg on the highway with the rear-wheel-drive version.

The first generation of the Porsche Boxster was produced between 1996 and 2004. In the present day, it's a very affordable sports car. It featured a 2.5-liter to 3.2-liter six-cylinder engine mated with a manual or automatic transmission to get 200 to 250 horsepower. The Boxster was able to cover 0-60 in about six to seven seconds with a top speed of 160 mph. The Cayman, introduced in 2006 with the second-generation Boxster, are mechanically the same vehicles, but the Boxster is a two-seater roadster while the Cayman is a fastback coupe. In terms of reliability, the Boxster/Cayman duo are typically more reliable than other German nameplates, but they do have higher maintenance expenses vs. Japanese and American sports cars. If reliability is an issue, you can typically also find the newer 2013-2014 Boxster for under $30,000, and it won JD Power's Initial Quality Study award. In some places, it may also be easier to find the hardtop Cayman over the Boxster. 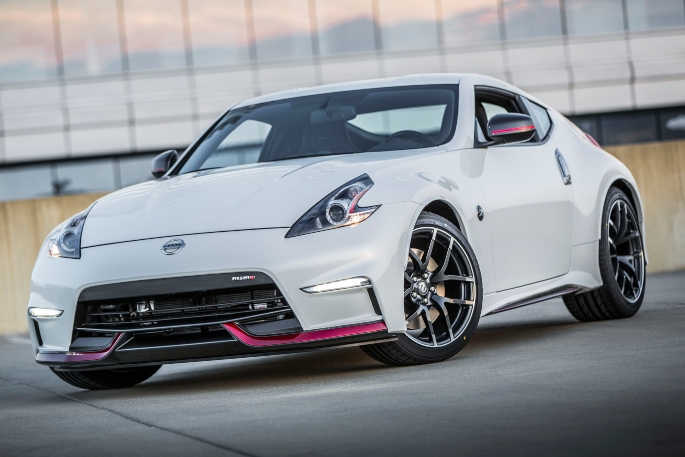 The current model of 370Z NISMO has a starting MSRP of $45,790, but if you look back to models between the years of 2012 and 2015, you should easily be able to find some for sale under $30,000. A 2015 NISMO offered a 350 horsepower V6 and a race-inspired suspension. It drove with sharp, sports car handling and quick acceleration. The current NISMO offers a seven-speed automatic transmission along with the six-speed manual, but older models only offered the manual. When it comes to reliability too, you're pretty well-covered with Nissan's strong ratings. 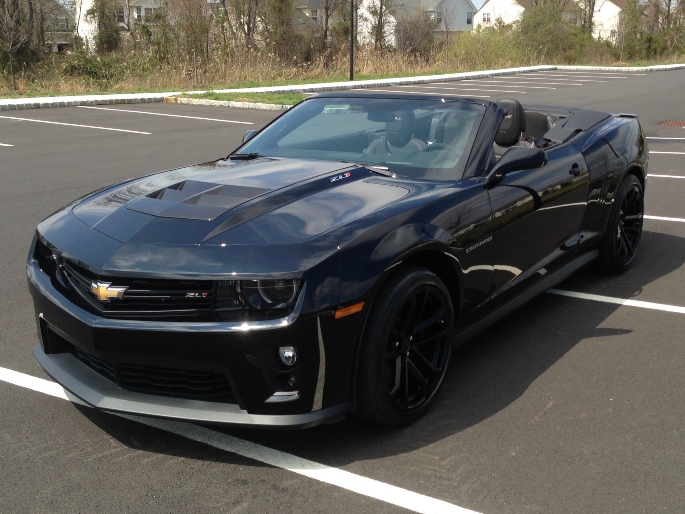 The Camaro was resurrected for its fifth generation in 2010 and the 2013 model year was a good one with a 426 horsepower engine for the SS version. If you want an even bigger boost, then you can opt for the supercharged 6.2-liter V8 in the ZL1, which made 580 horsepower. Finding 2013 and 2014 models of the Camaro for under $30,000 appears to be relatively easy as the average national price paid for a 2013 SS coupe was right around $22,500. If you want a convertible model, then you can expect to pay roughly $1,500 more. Reliability ratings from US News put the Camaro at a score of four out of five, which makes it a very affordable value. 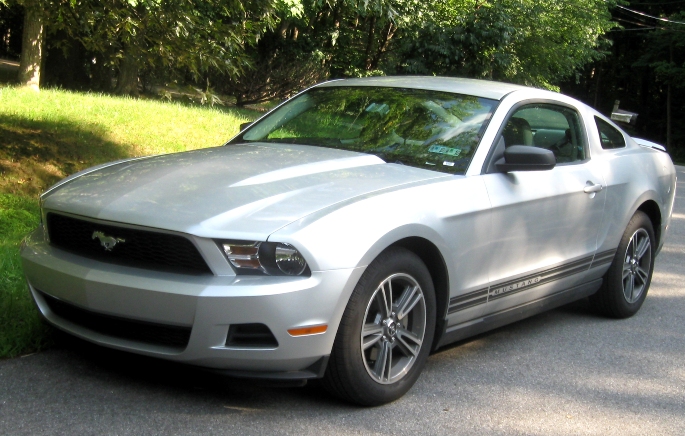 Another modern retro muscle car, the Mustang GT continuously ranks in lists of affordable sports cars, even when new. Finding 2010-2012 models under $30,000 now is pretty easy, and many of them still have relatively low mileage. If you opt for the Mustang GT, you'll be looking at a 4.6-liter V8 and 315 horsepower. The average price paid for it is right around $15,000 for the 2010 model. On the other hand, if you want even more power, then you might consider looking for the 2012 Mustang Shelby GT500, which offers a 500 horsepower engine. Though there are still plenty of examples over $30,000, there are also some just below that number with mileage below 50,000. The 2010 Mustang was given a five out of five reliability score from JD Power and Associates, which shows that you don't have to trade reliability for affordability. 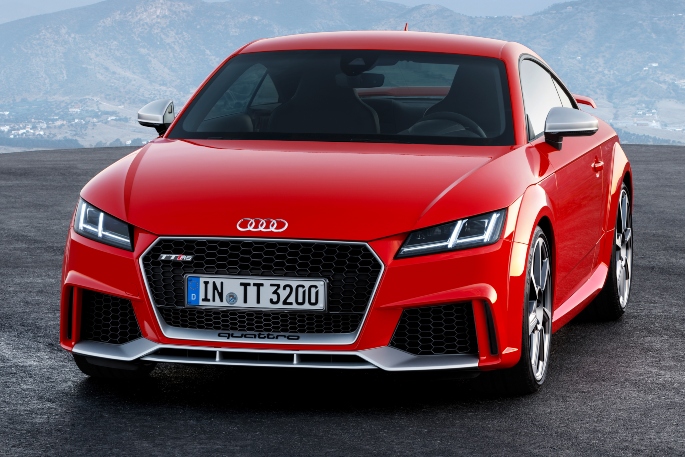 The 2016 Audi TT coupe started around $44,000 brand new, but it's now down to just under $30,000 in most cases. The TT from this year featured all-wheel-drive, stylish exterior and cutting edge interior technology. It offered a 2.0-liter turbocharged four-cylinder engine that put out 220 horsepower and with a 0-60 mph time of 5.3 seconds. The Quattro all-wheel-drive system gave the TT magnetic and sharp handling, allowing it to stick to hairpin turns with little effort. 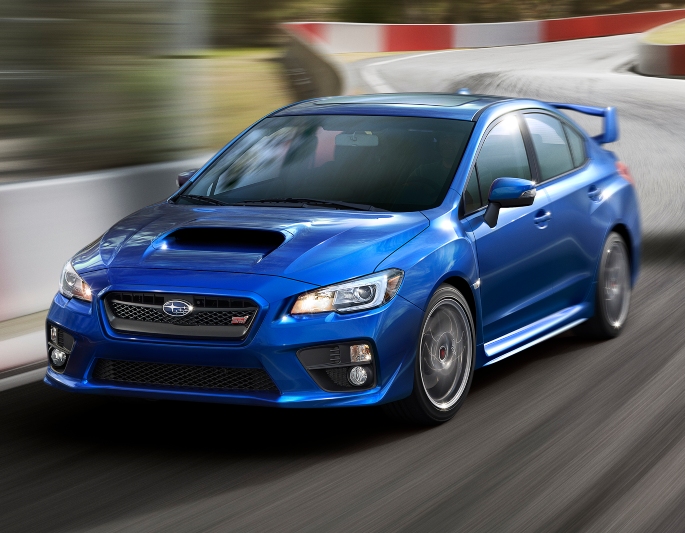 The Subaru WRX STI looks like an ordinary four-door sedan, but underneath it's far more of a sports car. It offers AWD and a six-speed manual transmission with a turbocharged 305 horsepower four-cylinder engine. A national average cost for a 2015 model of the WRX is just under $30,000. If you want a Limited trim or a Launch Edition, then you'll likely be paying a couple thousand more. On the other hand, if you want something a little cheaper, you could look for the base WRX, which still offered 270 horsepower in a turbocharged engine. Along with a fast and sharp-handling roomy four-door, you'll also get Subaru's strong reputation for making durable and reliable cars.

Now that the C7 Chevy Corvette is several years old and the next generation C8 has just been revealed, the prices on used C6s have dropped drastically. You can find various trims and models of the C6 generation just under $30,000 in most areas. Most of the time, you'll be looking at LT3 and LT1 models, as the Z51 models are still selling for over $40,000. With the C8 coming soon, there's no doubt that C6 Corvettes will continue to go down in price. 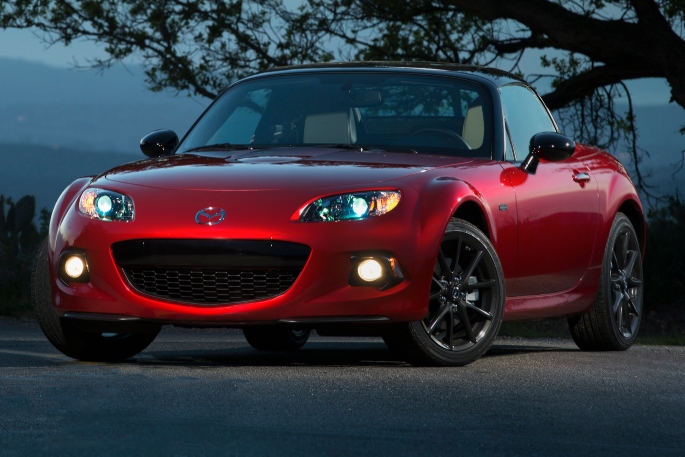 The Miata falls under the category of cars with seemingly unimpressive specs that are nevertheless both fast and sporty. In the case of the Miata, a 2015 Grand Touring model featured 167 horsepower with a manual transmission. If you opt for an automatic, then you're cutting horsepower down to 158. A manual hardtop of this model has a national average price of just over $19,000. An automatic typically costs some hundreds more. However, like some of the other cars mentioned here, the Miata is a small and light two-seater, which makes its power more than enough to zip around town. Reliability ratings for the 2015 model are average at 3.5 out of 5, but for the price, the value is decent.

Most of the models highlighted here should generally have on the lower end of mileage. But as with any used car, it's vital to get any prospective purchase thoroughly checked out and its history investigated. Performance cars often require more maintenance than other vehicles and can also be prone to accidents due to their speed and configuration.