With used vehicle pricing and resale values at all-time highs, it has become more difficult to find a good truck for less than $10,000. That does not mean that shoppers need to settle for a poorly-maintained clunker or spend three times that amount of money on a new truck. Some trucks on the pre-owned market are in excellent condition, with many makes and models available.

Whether you're towing a boat to the lake or hauling equipment to your job site, you need a truck you can rely on. When searching for a reliable truck it's important to ask for the repair and maintenance records of any truck you might want to buy. If the truck has undergone regular maintenance over its lifetime and has an up-to-date state inspection sticker, it is probably a truck you can trust. Keep in mind that private sellers typically have better pricing than dealerships, so you are more likely to find a quality used truck under $10,000 by going with a private party. Finding great used trucks for cheap is easier than ever, thanks to a wealth of online auctions, social media, and classified sites. 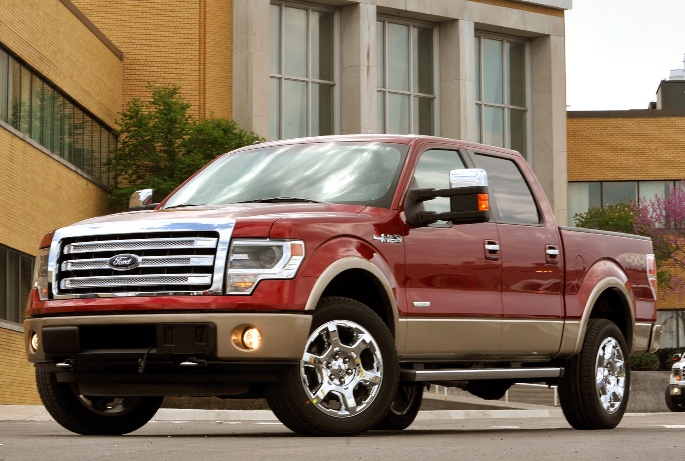 The Ford F-150 is of the best-selling vehicles in the United States, which makes it easy to find on the pre-owned market, with many model years available between $6,000 and $10,000. The 2004-2014 F-150 model years show up on many reviewers' lists of the best-used trucks under $10,000. With several cab, engine, and bed configurations available, there are used F-150s on the market to fit every need. Entry-level trims of the full-size truck variant F-150 and a light-duty truck model from years 2004 to 2008 both feature two- and three-valve V8 engines options. While models from 2011 and later include a standard four-valve engine with improved fuel economy.

Ford F-Series trucks are some of the longest-lasting and most dependable on the market. Purchasing in the $10,000 price range may lead to high mileage trucks, particularly if you are trying to obtain a newer truck. Still, used models of the F-150 with over 100,000 miles on the odometer may not be as big of a concern as other cars and trucks, assuming there are excellent maintenance records. 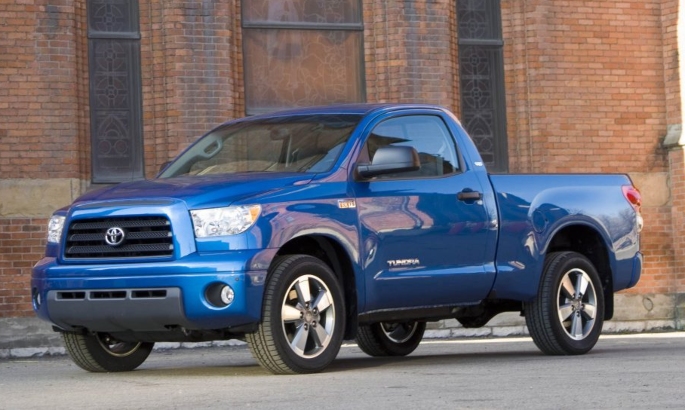 With a high predicted reliability rating, ease of operation, and earning the "Top Safety Pick" award from the Insurance Institute for Highway Safety (IIHS) in 2011, the Toyota Tundra is an excellent used truck. The older 2007 models are equipped with cloth bench seats, a CD player, a five-speed automatic transmission, and a 4.0-liter V6 engine producing 236 horsepower standard with an optional 4.7 liter V8. With high resale values, Tundras under $10,000 may have high mileage, but they may run well past the 200,000-mile mark with their reputation for extreme reliability.

There are even a few documented cases of Tundras pushing past the million-mile threshold, meaning shoppers may put less credence in mileage than a specific vehicle's maintenance and overall condition. Past-generation Toyota Tundra engines are less fuel-efficient than more modern options, so keep that in mind when deciding on the purchase's overall value. These trucks have essential safety features like traction control and airbags, and four-wheel- drive (4WD) is available across the lineup for off-road and four-season driving. 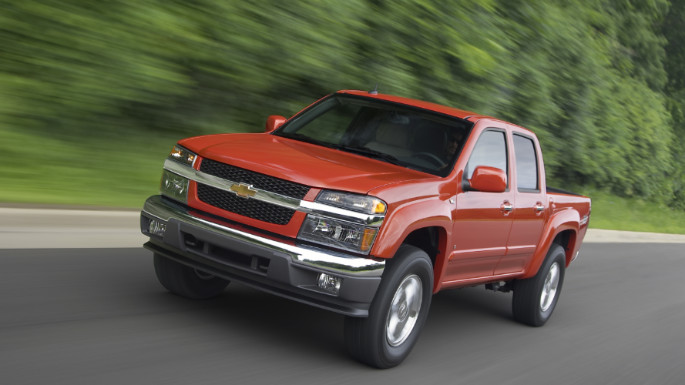 The Chevrolet Colorado pickup truck from General Motors ranks highly on many lists of the best-used trucks under $10,000. These midsize Chevy trucks come with an option of four-, five-, or eight-cylinder engines, and the first generation of Colorados feature two-bed lengths and three cab configurations.

Though the desirable V8 engine and crew-cab variants will be difficult to find under $10,000, the five-cylinder engine provided in these variants produces 220 horsepower and 225 lb-ft of torque. Smaller cab configurations shorten the overall length, making the Chevy Colorado better suited to city life. The highly-rated Chevrolet Colorado, displaying a split-bar grille and Silverado influences, can be found across various auction and classified sites for under $10,000. 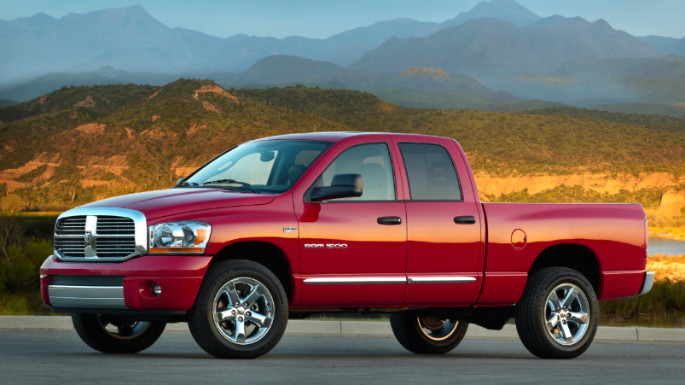 Manufactured by Chrysler, the Dodge Ram is a classic American full-size pickup truck. Thousands of Rams are available on the web for under $10,000. Rams have a distinctive look, with a bulging hood, muscular front fenders, and a crosshair grille, which sets them apart from the competition.

Rams also have an impressive towing capacity. With Chrysler's 5.7-liter Hemi V8 engine installed, a 2002-2008 model year Dodge Ram 1500 has up to 390 horsepower and 410 foot-pounds of torque. That's enough power to pull a trailer weighing over 8,000 pounds. Dodge Rams in the 2002-2008 model years are also available with a V6 engine, multiple cab and bed configurations, and are offered in rear-wheel-drive (RWD) and 4WD. There are plenty of Ram configurations to be found through various sources for under $10,000.

Discontinued in 2012, then rereleased in 2019, the Ford Ranger is one of the best-used pickup trucks for under $10,000. The 2006-2012 Ranger is a classic compact American pickup truck. Both six-cylinder and four-cylinder engines are available for this era of Ranger. Because these model years stayed reasonably similar from one year to the next, finding replacement parts for a used Ranger should not be too difficult.

No crew cab configuration was available in the US for this generation, but the Ranger offered one regular cab and two extended cab body styles. The Ranger was the last small US-made pickup and would be an excellent option for those shopping for a truck under $10,000. 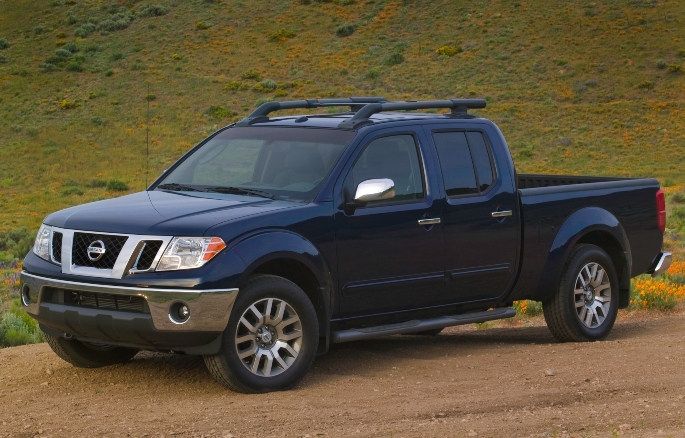 With hundreds of Nissan Frontiers available online for under $10,000, cheap pre-owned options are easy to find. RWD and lower trim levels are exceptionally affordable. Featuring cloth seats and a six-foot cargo bed, the Nissan Frontier is a good choice for everyday truck needs. The base-model Frontier produced 152 horsepower and 171 lb-ft of torque. It is also fuel-efficient, managing an EPA-estimated 23 miles-per-gallon (mpg) on the highway and 19 mpg in the city.

Frontiers tend to have lower resale value than the Toyota Tacoma, making them a bargain for buyers. Since newer Frontiers have retained most of the older models' styling and technology, customers might end up paying used-car prices for almost-new quality, assuming it's well-maintained with low miles. 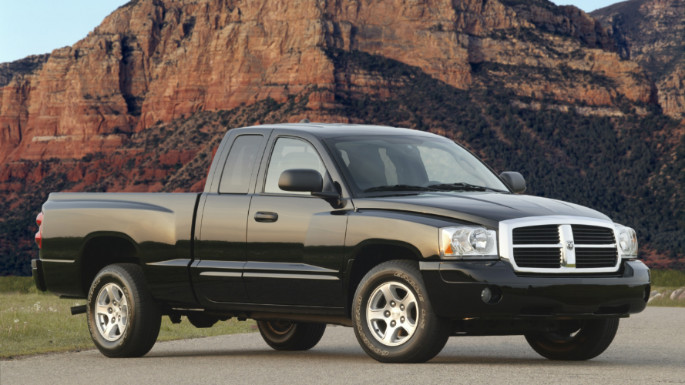 truck shoppers can find while researching cheap used vehicles. The Dakota is offered in regular cab, quad cab, and club cab body styles. These configurations make the Dakota a versatile option and put it on several lists for the best trucks under $10,000. Often used as an off-road rescue vehicle, police car, wildland fire engine, and more, it is essential to check Dakota's vehicle history report for past damage.

The 2004-2011 Dodge Dakota featured V6 engines capable of up to 210 horsepower, with optional V8 motors delivering up to 290 horsepower. Several years of the Dakota are available with a six-speed manual transmission for more driver connection. Properly configured, a used Dakota can tow up to 6,700 pounds, making it a great weekend hauler or work truck. 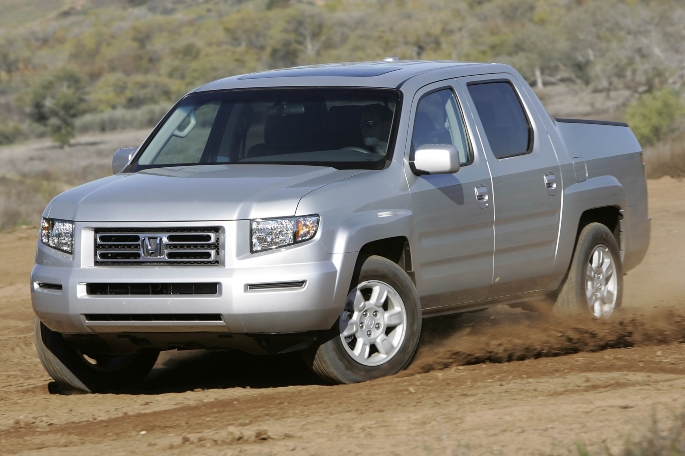 A unibody pickup truck, the Honda Ridgeline enjoys rare fuel economy for a truck and car-like driving dynamics. It is the ideal truck for someone who wants to use it for commuting and does not need to haul items often, as it rides more similarly to a crossover SUV. With hundreds of used Ridgelines listed online for under $10,000, this vehicle is a great choice, though you may have to pay over $9,000 for a clean, low-mileage option.

The base Ridgeline from this era comes with an innovative in-bed locking trunk and flatbed floor. It also has a novel barn-door opening tailgate. Honda Ridgelines from the 2006-2014 generation can carry 1,500 pounds in cargo payload and tow up to 5,000 pounds. Reviewers generally rave about the Ridgeline due to its capability and livability. The Ridgeline has most of the capabilities truck shoppers want without sacrificing ride quality, handling, and interior noise that often plague its more rugged rivals. 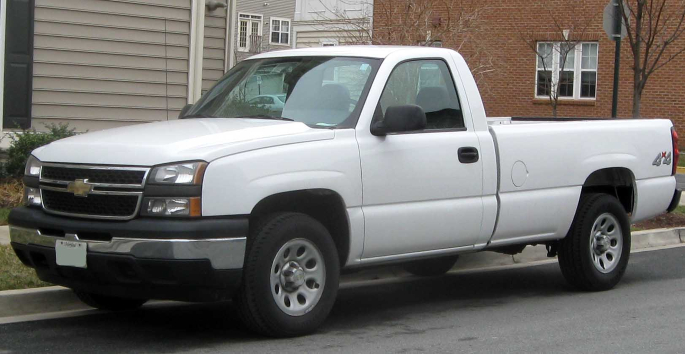 The Chevrolet Silverado is second only to the Ford F-150 in popularity, with roughly 400,000 sold every year for the past two decades. The full-size, light-duty Silverado has many variations and offshoots, including the off-road Z71 version and V8-powered variants capable of impressive hauling and towing.

The Chevy Silverado shows up on a multitude of lists for best trucks under $10,000. With multiple cab and bed configurations, the right Silverado is out there. Silverados are stout vehicles with impressive predicted reliability, and replacement parts are widely available should anything break. The newest model years may be tough to find under budget, which means buyers will be looking for older models, likely without four-wheel-drive. 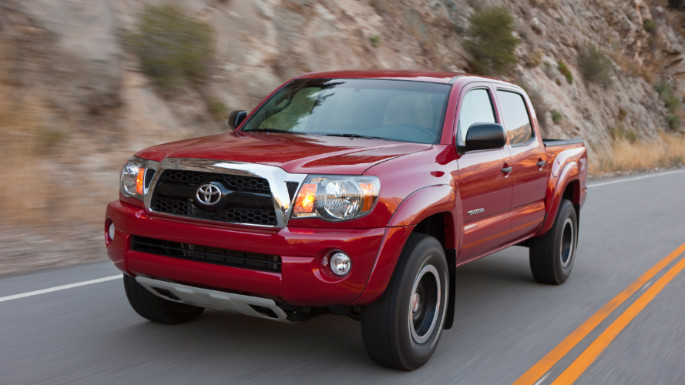 The Tacoma is another top-rated pickup truck in the US. This compact pickup has two drivetrain options: a fuel-efficient four-cylinder engine or a more robust V6 engine. The Tacoma is not available with a V8 engine, but there are several bed lengths and wheelbases available. Due to the Tacoma's has a high resale value, shoppers may end up paying a bit more for one than for other pickups on the pre-owned market.

Four-cylinder Tacomas can achieve nearly 26 MPG on the highway and 20 MPG on city roads, saving owners money in the long run compared to larger trucks. The Toyota Tacoma is well-known for its reliability, so buyers should not worry about higher mileage options. This is good news, as it is likely any Tacoma under $10,000 will have a higher odometer reading than most other options. 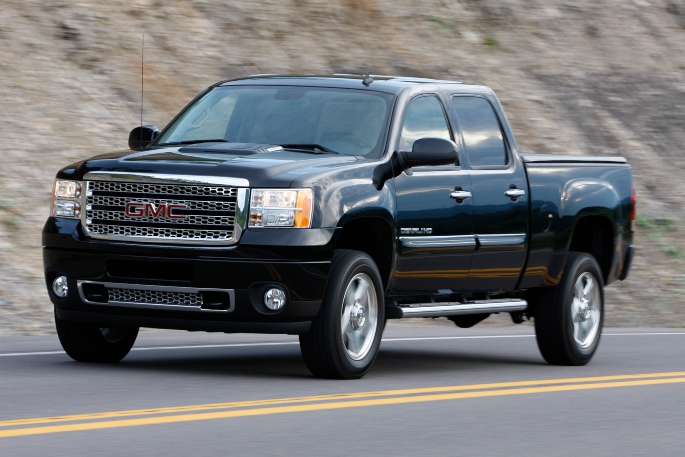 Although very similar to the Silverado in design, the GMC Sierra is a slightly more upscale vehicle aimed at family use. The Sierra finds its way on to several lists for the ten best trucks under $10,000. GMC Sierras should be considered by anyone looking for a used truck at this price point.

Mechanically similar to the Chevy Silverado, the GMC Sierra 1500 is available with V6 and V8 engine options, as well as in a variety of cab and bed sizes. Lucky buyers may be able to find the luxurious SLT and Denali trim levels starting to slip under that $10,000 threshold, though many in this price range will have over 100,000 miles on the odometer. 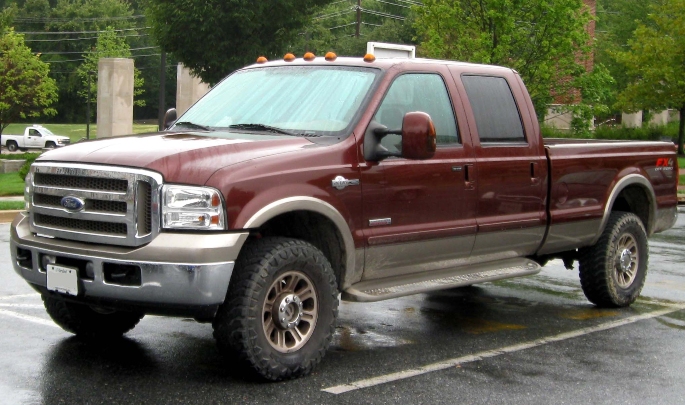 Part of Ford's Super Duty lineup, the Ford F-350 is an affordable workhorse of a truck. It can pull everything from boats to horse trailers and is ideal for commercial use. Hundreds of Ford F-350s are available online for under $10,000. Many best-of lists under $10,000 recommend the F-350 to people looking for a cheap truck with a lot of towing power.

Ford F-350s have high resale value, typically costing more second-hand than their Dodge, GMC, and Chevy equivalents. Their diesel engines also achieve excellent fuel economy, which in turn delivers even greater value, but diesel-equipped models will be difficult to find under the $10,000 mark. Those looking for a heavy-duty Ford will be looking at older models, so a pre-purchase inspection and extensive maintenance records are big pluses. 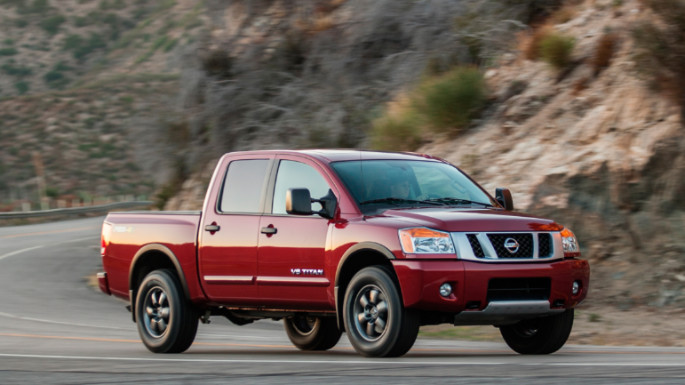 Nissan's full-sized Titan is an excellent alternative to the Toyota Tundra and often has a lower resale value, making it a more affordable used choice. With standard V8 power, the Titan has plenty of power for filling the bed with gravel or hauling the boat to the lake.

The 2004-2014 Nissan Titan maxes out at 9,300 pounds towing and 2,153 pounds of the payload. American shoppers may also find it compelling that the Nissan Titan was built in the USA. Thanks to average prices, the Nissan Titan should be easy to find, even in crew cab and 4WD configurations, for under $10,000 with reasonable mileage.

These trucks scratch the surface of what's available on the pre-owned truck market. Other great pickups available for under $10,000 include the GMC Canyon, Ford F-250, Ford Explorer Sport Trac, Chevrolet Avalanche, and rarer models like the Mitsubishi Raider. Trucks tend to have a high resale value, as they outlast most other vehicles due to their more durable builds. Whether in need of a heavy-duty truck for hauling machinery or a light-duty one for commuting to work in style, today's buyers can indeed find a great used truck for under $10,000.