Pickup trucks, along with SUVs, have skyrocketed in popularity over the past several years. That has driven prices up, leaving many wondering where and how they will find the right pickup truck at a reasonable price.

Fortunately, many of the best used trucks under $15,000 won’t leave you owing a vehicle from the dark ages. Pickup trucks have evolved from their strict work truck status of old to become practical, comfortable, and family-friendly vehicles.

The $15,000 price point definitely won’t provide the most up to date technology features, safety features, or modern comforts of the newest trucks or used cars on the market, but it can buy a solid vehicle that will function as a daily commuter, a great family transporter, and a work vehicle at the same time for years to come. 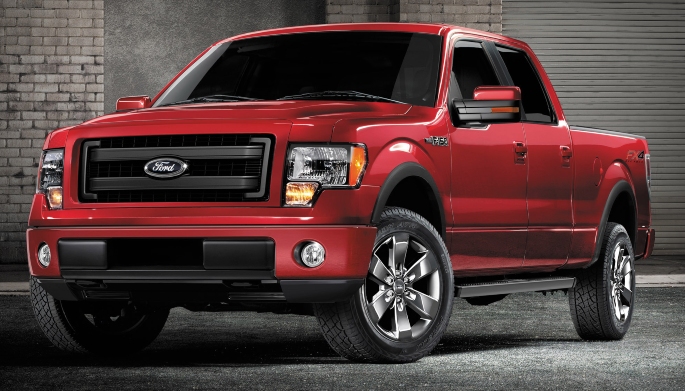 The Ford F-150 is the most popular truck of all time. That doesn’t automatically make it one of the best used pickup trucks for under $15,000, but it is a strong indication that it should. People buy the F-150 for its plentiful amount of interior room, towing capacity, power, cargo capacity, drivability, reliability, and its fantastic reputation for being well built.

The 11th and 12th generation F-150s are starting to hit the $15,000 mark for your pickup truck purchasing needs. Fitted with a powerful V8 engine, along with an EcoBoost V6 first available in 2011, later model F-150s can be used for just about everything.

Available with four doors, short and long bed configurations, and gobs of towing capability, the F-150 is very nearly the perfect pickup. 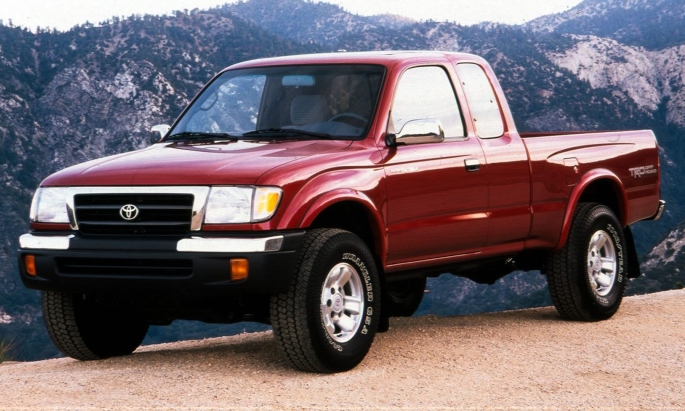 The midsize Toyota Tacoma is built on a reputation of near bulletproof reliability. Even though the F-150 is larger and generally more capable, good condition used Toyota Tacomas are still selling at five-digit price tags despite having over 250,000 miles on the odometer.

The choice of a V6 or a four-cylinder engine, the availability of a four-door crew cab, and the choice of either an automatic or manual transmission make the Tacoma buying experience very versatile.

The Tacoma is not the most refined or comfortable truck, according to many who have reviewed it, but it probably will outlast just about everything else on the road. 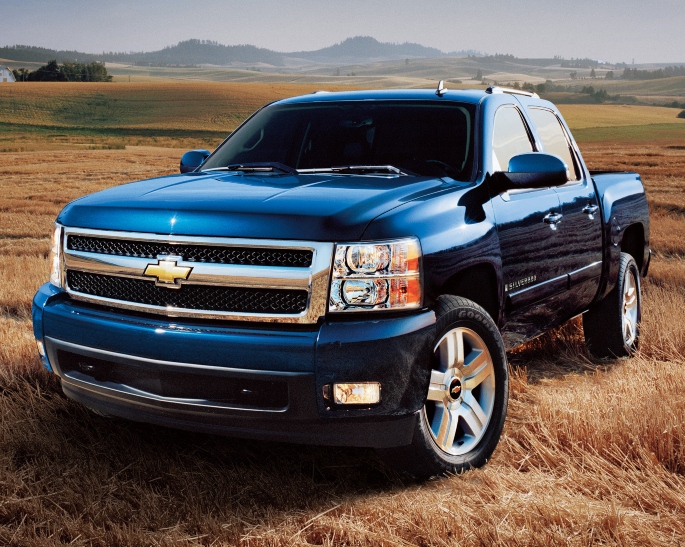 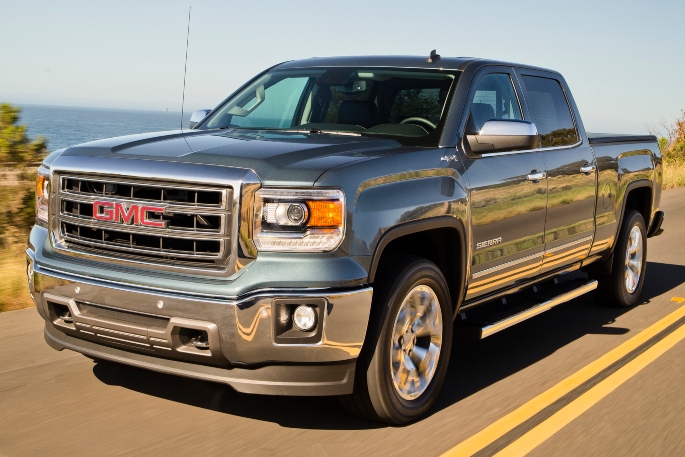 The 2009 Silverado took home U.S. News and World Report’s Best Full-Size Truck for the Money award while the 2007 model earned the North American Truck of the Year award.

Both models offer four-wheel drive and two-wheel drive options and can be found with one of several engine options, including a 5.3-liter, 6.0-liter, and 6.2-liter V8 engine. Extended cab variants can seat up to six passengers because of their size.

The best used examples will come in at a much higher price point than $15,000, but many can be found in numerous trims and layouts at or below that number. 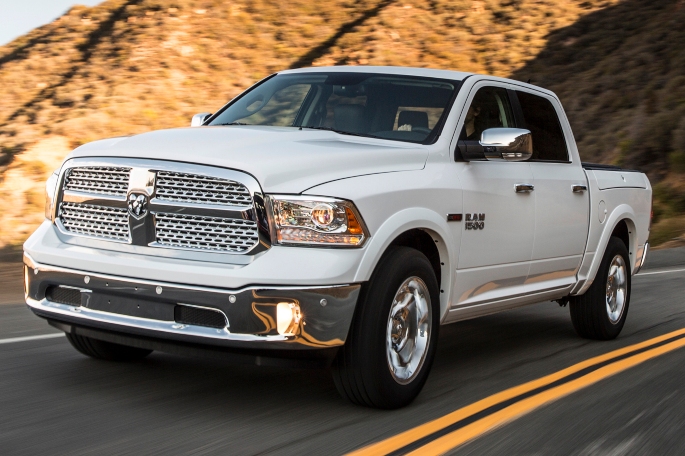 The Ram 1500 is the full-size alternative to the Silverado and F-150. Resale values are not as strong as either of these, but that means used examples are easier to come by with fewer miles and less wear.

Engine options included one of several V6s, legendary Hemi V8s, and even a Cummins turbo-diesel. The Ram 1500 was also offered with a manual transmission for the model years listed here, even though the F-150 and Silverado were not.

Four-wheel-drive, a four-door crew cab, and ample towing capacity mean that a $15,000 Ram 1500 can easily be found with everything that one would need in any vehicle. 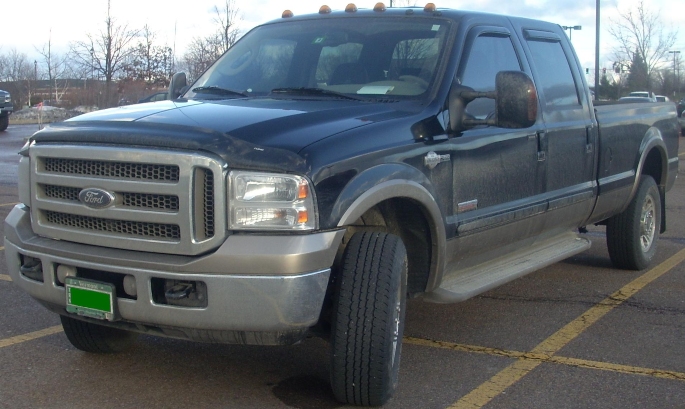 2005-2007 marked the end of the first generation of Ford F-series Super Duty trucks and 2008 ushered in the second generation. If the Ford F-150 is just a bit too small for your liking, the F-250 should do the trick.

It comes with a choice of two V8 gasoline engine options or a diesel option for even more towing and hauling capability. Regular cab, extended cab, and crew cab options are also available for an even more flexible buying pool.

Four-wheel drive with an available off-road package option and out-of-this-world towing capability make the heavy-duty F-250 a strong choice for the worker who needs to get a little dirty or for the family man who wants to rule the road.

Because of its durability, strength, and variety of engine options, buyers will have to reach back a few more years than most $15,000 F-150s to find good used examples of the F-250. Don’t worry, though. They have a reputation for being reliable and durable, and there are plenty available on the market. 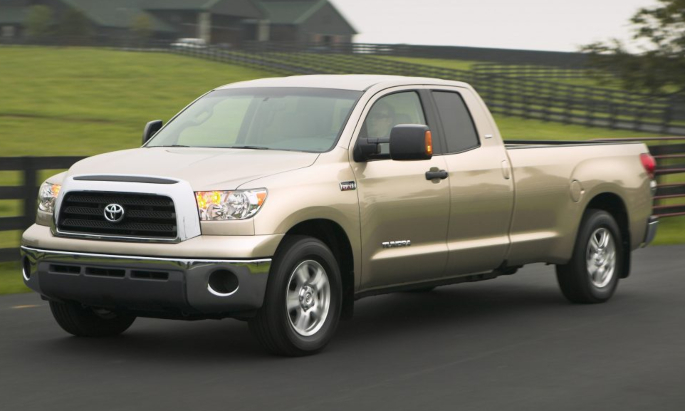 The full-sized Toyota Tundra is overshadowed by both the Ford F-150 and its smaller Toyota Tacoma sibling. Even though the Tundra is offered with a V8 engine, a large, four-door crew cab option, and near 11,000-pound towing capacity, it still can’t rival the F-150 or Tacoma for their reputation.

That doesn’t make the Tundra a poor choice for one of the best used trucks under $15,000. The current generation of Toyota Tundra is not that far removed from the previous, and only slight revisions set it apart.

It may not have the “built Ford tough” reputation that the F-150 does, but it can do everything nearly as well. It also has that traditional Toyota reliability to back everything up, which is enough for many to choose it over its American rival.

Resale values are beginning to bring good used models well within reach of the $15,000 mark. 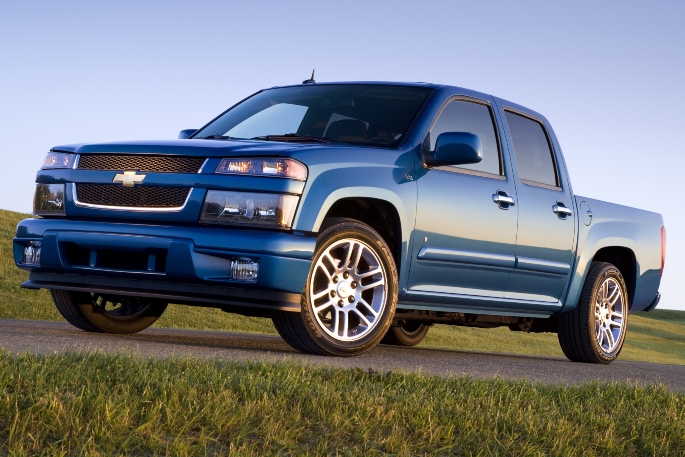 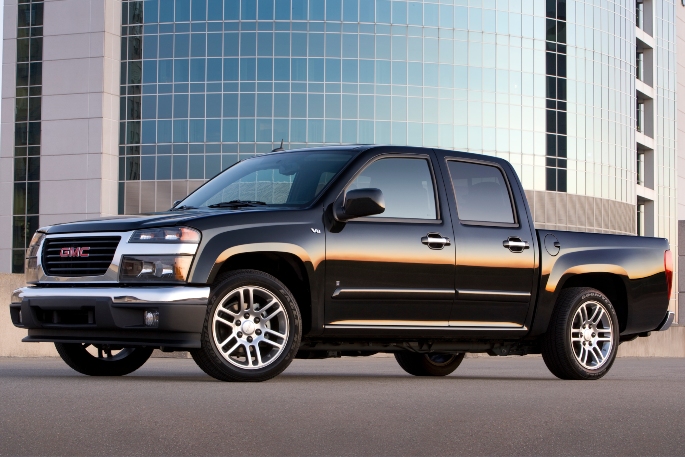 Like the Chevy Silverado and GMC Sierra, the Chevrolet Colorado and GMC Canyon are very nearly the same truck. Both are compact trucks available in two or four-wheel drive and come with the option of four doors for family hauling.

Of course, towing and hauling capability are limited compared to the Silverado and Sierra, but nearly 6000 pounds of maximum towing capability is not bad for a small pickup.

The Colorado and Canyon were both offered with the choice of a four-cylinder or five-cylinder engine. The latter provided more towing capacity while the former provided better fuel economy.
Examples can be found for around $15,000, but they are not as numerous as the Tacoma and Frontier, both of which have better reliability ratings. 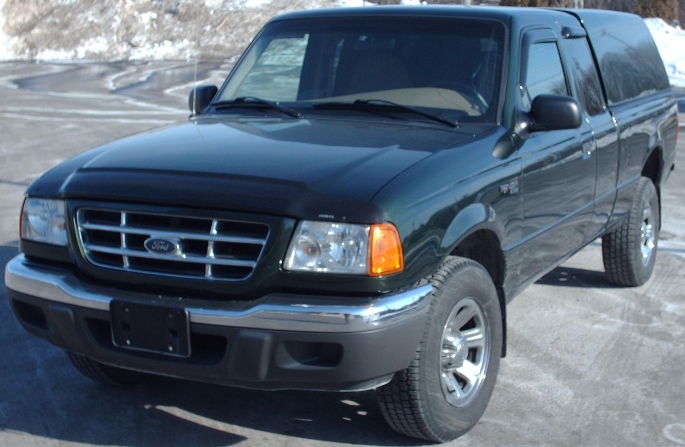 The Ford Ranger has recently made a return to the United States market after being discontinued after the 2012 model year. The 2019 Rangers will be way out of the $15,000 range, but the used Ranger is one of the best used trucks under $15,000, as well as one of the best-selling compact trucks of all time.

It notably has the disadvantage of not being offered with four doors and only having an extended cab, something that would be very out of the ordinary for a new truck today. What it does have is Ford’s rugged reliability record to back it up and the simplicity and ability to get it through whatever it needs to.

It was offered with a manual transmission with an available 4.0-liter V6 engine. A four-cylinder engine was optional. Two-wheel drive and four-wheel drive options are both available.
Simply because it is less of a family truck than most other trucks today, resale values have placed very nice used examples squarely in the $10,000 to $15,000 range, making the Ranger one of the best and most affordable pickups buyers can find on the market today. 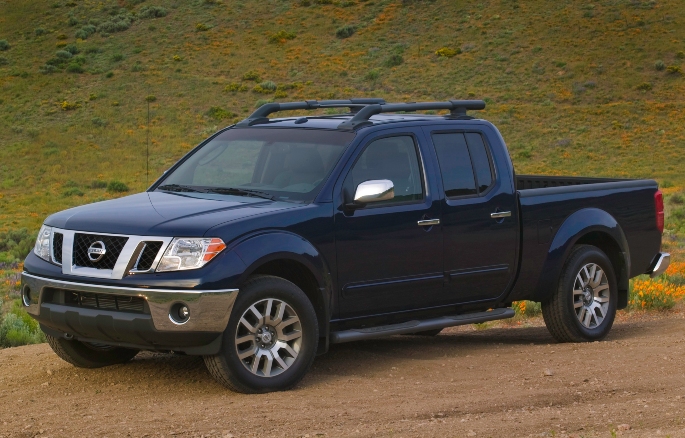 The current generation Nissan Frontier has been around since 2004. Many critics of the truck claim that it is dated, too poorly equipped, and even too small to be a complete light duty truck.

Despite this, and the fact that it is greatly overshadowed by its closest rival, the Toyota Tacoma, the Frontier holds its value incredibly well.

Its powerful V6 engine provides spritely acceleration, the off-road-oriented Pro 4X trim gives buyers the option of a calm and capable authentic off-road experience, and the Frontier’s simplicity and purportedly dated design has proven highly reliable, according to leading studies.

The ready availability of a manual transmission will cater to those who want a more traditional driving experience while a king cab or four-door crew cab option can provide flexibility for any buyer.

The latest model years can be challenging to find used with low miles, particularly in the Pro 4X trim. Earlier model years are plentiful, and even with high mileage, finding a used Frontier in good shape can be a great purchase. 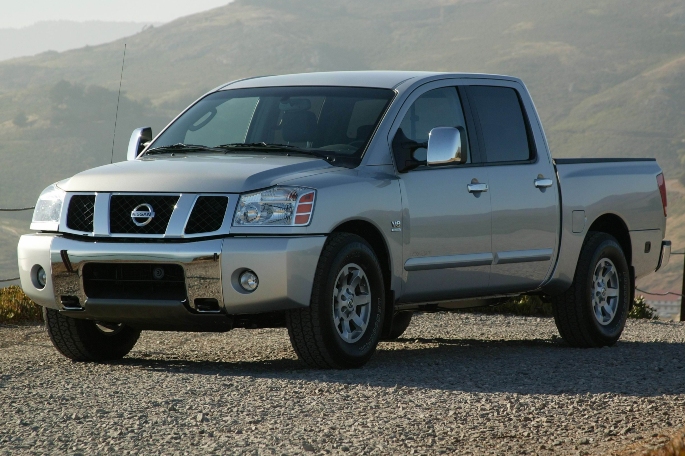 The Nissan Titan is the Frontier’s older brother and a direct full-size competitor to the Tundra, F-150, Silverado, and Sierra. It comes in right beside its smaller Frontier counterpart compared to other used pickup trucks as an underrated player.

Resale values aren’t as strong as the Tundra, but that just means that used examples are easier to find for around $15,000.

It has a robust V8 engine which produces 317 horsepower and 385 lb-ft of torque, enough to tow a maximum of 9500 pounds. Like the Tundra, the Titan can do many things the more well-known F-150 and Silverado can do, without having the stellar reputation or rugged persona of either. 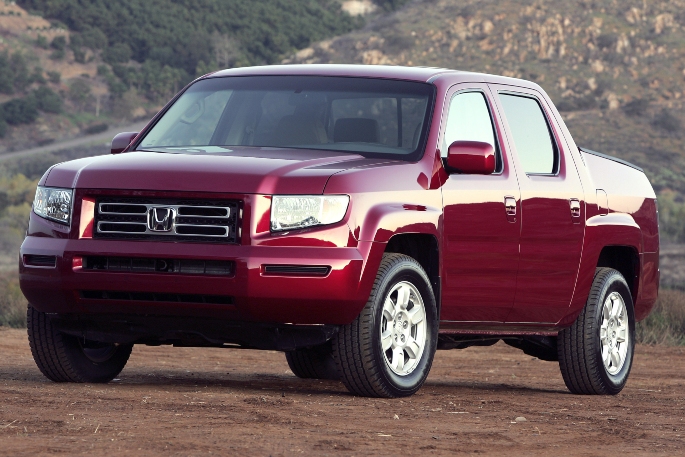 The Honda Ridgeline has been criticized by reviewers and “truck guys” alike for being too much unlike a truck to be classified as one. Despite its better handling, more comfortable ride, and less payload and towing capacity than other rivals, the Ridgeline is still very much a pickup truck.

It is similar to the Chevrolet Avalanche, which combined the cabin of an SUV and the short bed of a pickup truck to form a kind of new hybrid vehicle.

It was never offered with a manual transmission, it never had a V8 engine, and the truck bed is smaller than most competitors, but it did come standard with four doors, an automatic transmission, the passenger space of an SUV, and its fuel economy was good for the class.

Buyers looking for a truck without the harsh ride, traditional work truck simplicity, and maximum towing capacity will find the Ridgeline to be a perfectly acceptable family vehicle with the capability to haul typical items when the situation calls for it.

Later model Ridgelines will be hard to come by for $15,000 or less, but earlier year models are beginning to show themselves on the market.