The 2019 Subaru Crosstrek is a subcompact crossover SUV which is currently in its second generation of production.

Several new features are now offered on more trim levels this year, and more safety features are offered on base models for 2019. Additionally, a plug-in hybrid powertrain is now available.

Introduced in 2013, the Subaru Crosstrek was redesigned for 2018. It is smaller than the Forester and Outback two-row crossovers siblings, being very similar in size to the Impreza hatchback, with more ground clearance.

TLDR: The Crosstrek looks like a Subaru hatchback with higher ground clearance.

The exterior of the Crosstrek follows Subaru's design language perfectly as it resembles the Impreza on which it's based. 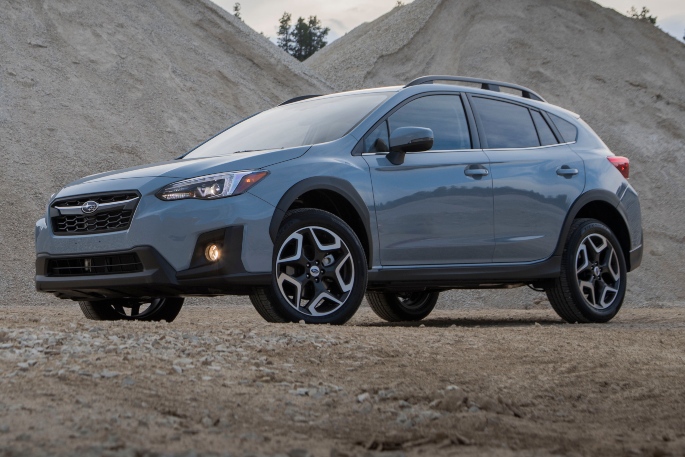 A small, disproportionate hexagonal grille, the classic Subaru logo, and swept headlights characterize the front fascia. All come together to mimic a cheeky smiling face. Beyond this, a small lower grille opening and fog lights are the only other prominent features the Crosstrek possesses.

The rear of the Crosstrek is very similar to that of a traditional hatchback car. A sizeable rear bumper, taillights that extend to the side of the vehicle, a flat hatch, and fairly steeply racked rear window are characteristics of many smaller SUVs, including the Crosstrek. Again, the Subaru Impreza hatchback retains a substantial influence in the rear design.

The side profile of the Crosstrek resembles nothing more than a hatchback car with more ground clearance than usual. Plastic trim surrounds the bottom of the SUV and gives it a rugged appearance. Its short rear overhang makes it look smaller than it is, and its roofline forms a giant umbrella over all the side windows. 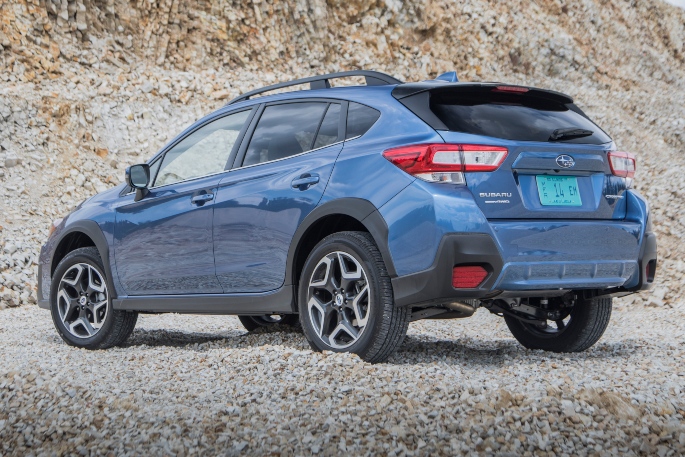 Previous generations looked rounder, especially over the roofline and down the rear of the vehicle. The current generation Crosstrek has been given a more serious overall look with a sharper front end, more severe head and taillights, and a more purposeful roofline. Higher ground clearance than many rivals also gives it a tougher impression.

TLDR: Interior quality and comfort are both better than average for the class, but many report the cabin to be noisy.

Testers conclude that interior quality is good for the class, and comfort is generally above average compared to the competition. 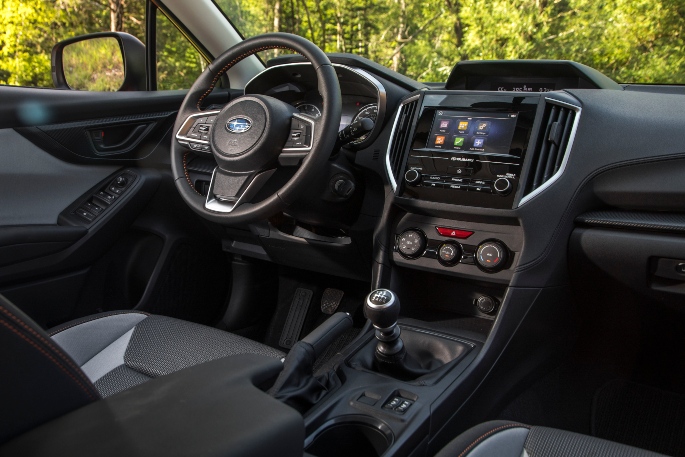 Most testers agree that the seats are firm but are appropriately bolstered to eliminate sliding. Getting into the seats is easy for reviewers as well due to its increased ground clearance. Most agree that interior space is above average considering the Crosstrek's small size with ample legroom all around.

Reviewers note that interior ergonomics, easy-to-use infotainment system, and straightforward information screens are all good, but do not lead the segment. 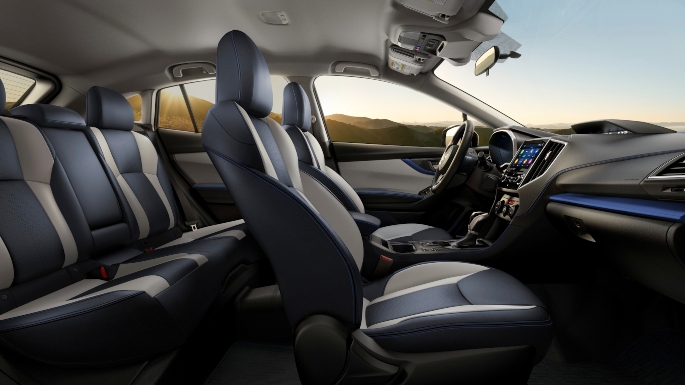 Interior materials are satisfactory, as expected by reviewers, similar to similarly priced rivals. One complaint that almost all reviewers have is the noise from the engine and road. Not being a luxury vehicle, some noise is expected by testers, but many agree that it is above normal even for the class.

Utility and Practicality are two of the Crosstrek's stronger qualities.

Cargo space is average for the class with nearly 21 cubic feet of space when all seats are in place and over 55 cubic feet when the rear seats are folded flat. Reviewers universally love that the second row does fold flat to maximize the space in such a small vehicle. Many other competitors offer a flatter rear-end design to allow more upright cargo space.

Cargo and passenger loading are both made easy by the Crosstrek's easily accessible height. Most loading situations do not require bending, and passenger entry does not require climbing into or falling into the seats. 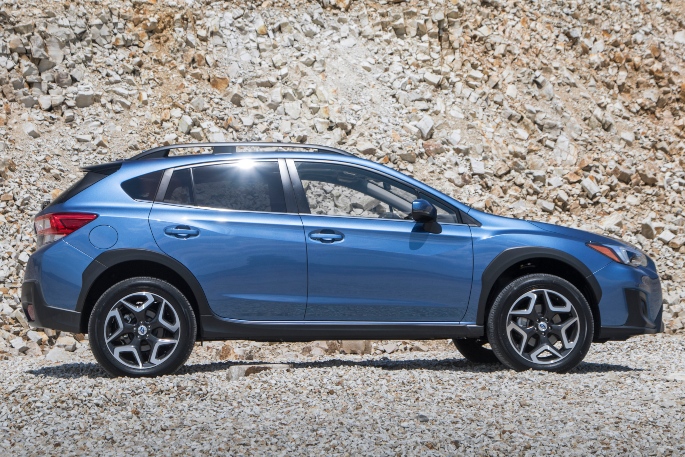 As with most other Subaru's, the Crosstrek is available with a plethora of other cargo accessories for additional storage, given that Subaru has a large following among people with active lifestyles. However, small-item interior storage is noted to be only acceptable by reviewers.

The driving position is a pleasant surprise to reviewers. Many reviewers agree that it is among the best in the class. Coupled with excellent visibility all around, the Crosstrek is noted to be easy to drive.

Subaru's excellent all-wheel-drive system, along with its 8.7 inches of ground clearance, allows the Crosstrek more capability than many other competitors. Only the Jeep Renegade can top the Crosstrek's off-road capability, but most reviewers do not expect buyers to use the Crosstrek for serious off-roading.

TLDR: Technology is reasonably good for the class while the infotainment system is straightforward.

Technology an infotainment offerings are mostly satisfactory for the vehicle in this class and price point. 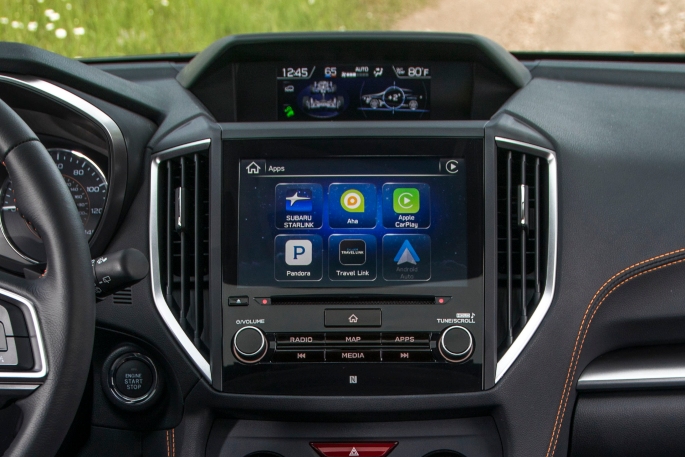 Apply CarPlay and Android Auto smartphone integration are standard features along with Subaru's Starlink infotainment system. It is paired to a 6.5-inch touchscreen display and includes Bluetooth, voice controls, and a USB port.

TLDR: The Crosstrek is one of the safest vehicles in its class.

Subarus are some of the safest vehicles on the road. The Crosstrek has the added availability of the EyeSight safety suite for 2019, giving it the upper hand against competitors with less safety equipment.

In addition to its outstanding safety features, the Crosstrek has been awarded top crash-test ratings by both the National Highway Traffic Safety Administration and the Insurance Institute for Highway Safety. The NHTSA has awarded the Crosstrek with five out of five stars overall in its testing. IIHS rated it as a Top Safety Pick+ based on all of its safety categories.

TLDR: The Crosstrek is low in performance and handling, but handles itself better under usual driving conditions.

The Subaru Crosstrek driving experience represents a mixed bag to reviewers. Most agree the Crosstrek is pleasant to drive when not pushed to its limits. They also agree that performance is among the worst in the class and that the lack of engine and transmission refinement can be uncomfortable.

The Subaru Crosstrek is available with one engine option as well as a hybrid powertrain.

A 2.0-liter, four-cylinder engine produces 152 horsepower and 145 lb.-ft. of torque. A six-speed manual transmission comes standard on the lowest trim models of the Crosstrek with an optional CVT automatic is standard on the highest Crosstrek trim, optional on others.

A Crosstrek plug-in hybrid is also available which utilizes the same engine but produces a slightly lower 148 horsepower in combination with two small electric motors.

Though reviewers praise the Crosstrek's road manners in most normal driving situations, they are underwhelmed by the power and responsiveness of the engine and transmission. The Mazda CX-3 has less horsepower than the Crosstrek, but reviewers agree that it is much more agile and responsive, making the CX-3 feel much faster than it is.

Reviewers complain that the CVT has quite a bit of lag when the accelerator is pressed and that the Crosstrek struggles to get up to highway speeds when brief acceleration is necessary. Generally speaking, those times are limited, and the power is adequate for most normal circumstances according to reviewers.

Zero-to-60 mph acceleration times come in at over 10 seconds, slower than most competitors. Braking fared better with reviewers noting that brake pedal feel is stable and consistent. Braking distances from 60 mph came in at 118 feet, according to testers, roughly the average for the segment.

The Crosstrek's handling also falls behind the competition. The CX-3 sets the benchmark again, while the Crosstrek is rated by many reviewers as close to the bottom.

Maneuverability makes up some lost points as reviewers note that the Crosstrek has a tight turning radius and easy-to-use steering in tight cornering situations. Most agree that normal city driving and reasonable off-road use are the best-suited areas for the Crosstrek.

TLDR: The Crosstrek returns average fuel economy, but the hybrid option is better for those who prioritize efficiency.

Fuel efficiency is considered by many reviewers to be a significant weakness of the Crosstrek, although a plug-in hybrid has remedied that somewhat.

The 2.0-liter engine is EPA-rated at 23 mpg city and 29 highway when combined with the six-speed manual. A combined 25 mpg rating is one of the lowest in the segment. Models equipped with the automatic transmission are rated at 27 mpg in the city and 33 on the highway, with a combined rating of 29.

The Mazda CX-3, Honda HR-V and Hyundai Kona outshine the Crosstrek by returning combined estimates of 30 mpg or higher. The Jeep Renegade and Fiat 500X come closer to the manual Crosstrek's estimates, but both round out the bottom of the class in fuel efficiency.

The Crosstrek Hybrid gains a much better rating for the class, returning a 35 mpg combined fuel efficiency rating. However, it only has an estimated 17 miles of electric-only range. State and federal incentives may be available for this version.

TLDR: Crosstreks are well-equipped compared to their competition, but a top-of-the-line model can quickly become pricey.

All-wheel-drive is standard on all Subaru Crosstrek models.

The hybrid option costs an additional $7,800 over a similarly equipped Limited model. It also uses a 2.0-liter four-cylinder engine, with assist from an electric motor.

The 2019 Subaru Crosstrek is available in three different trim levels:

The base Crosstrek 2.0i starts at $22,870 with the destination fee included. A six-speed manual transmission is standard, and the CVT is a $1,000 upgrade.

Standard features include everything from 2.0i including heated front seats, a six-speaker sound system, a leather-wrapped steering wheel, automatic headlights, fog lights, heated side mirrors, and additional Starlink Multimedia features.

Options include an upgraded EyeSight system with blind-spot monitoring and rear cross-traffic alert, satellite radio, and a power moonroof.

Fully loaded, the most expensive Subaru Crosstrek models will cost around $40,000.

TLDR: The Crosstrek offers a better than average value because of its capability, safety, and overall ability to do the most important things well.

The 2019 Subaru Crosstrek presents potential buyers with a better than average value for a compact SUV.

As noted by reviewers, performance is severely lacking compared to the competition. Acceleration comes in at the bottom of the class, and most reviewers agree that handling is not one of the Crosstrek's strong points.

The fuel economy is average for the class. The hybrid option is much better, but it is also generally more expensive unless buyers opt for the top-of-the-line Limited models with all of the options.

Cargo capacity, seating room, standard equipment, and comfort are all standard for the segment. The Crosstrek shines when it comes to safety, capability, and purported reliability.

If agile handling and strong performance are musts, the Subaru Crosstrek will disappoint. It can hold its own in every other category and outshines many comparable subcompact SUVs with its superior safety and go-anywhere capability.

It is priced slightly higher than some competitors, but it is not the most expensive vehicle in its class. It delivers what most reviewers see as crucial to potential buyers very well for the price.