The 2019 Toyota Sienna is a minivan, capable of seating up to eight passengers, now in its third generation of production.

It competes with other minivans like the Honda Odyssey, Dodge Grand Caravan, Kia Sedona, Chrysler Pacifica, and Chrysler Pacifica Hybrid. This segment has dramatically shrunk over the past several years with the Nissan Quest most recently falling out of production in 2017.

The only new feature for the 2019 model year Toyota Sienna is the addition of standard Apple CarPlay and the Amazon Alexa Google Assistant.

Though not new for 2019, the Sienna is the only minivan in its class to offer optional all-wheel drive. That option has been extended to include the SE trim for 2019.

Last redesigned in 2011, the Sienna is starting to show its age. Predicted reliability is best in class and features are plentiful, but reviewers note that the design is looking dated while the interior is much less refined than other competitors on low-end trim models.

With its available all-wheel drive, the Sienna treads a fine line between the SUV and minivan segments. Even being a minivan through and through, the practicality and power the Sienna brings to the table is a choice not easily ignored when it comes to family hauling and suburban living.

The Toyota Sienna looks the part of a traditional minivan. Though not as traditional-looking as the Dodge Grand Caravan, the Sienna retains its somewhat boxy appearance with a reserved styling familiar to many Toyota owners. 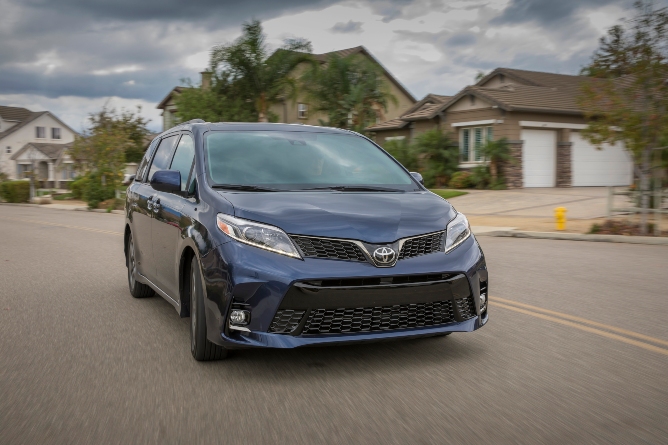 The Honda Odyssey and Chrysler Pacifica are both more gentle and curvy in appearance, while the Sienna lacks the character lines of both of these competitors.

Even though the rear of the minivan curves nicely into the rear hatch, its lack of character lines and large canopy give the Sienna a commanding presence, its grille follows the traditional Toyota styling and is a polarizing piece of design that many reviewers could still do without.

The Sienna is not aggressively styled like some SUVs and cars with jagged lines and sharp headlights, but a tapered roofline gives it a nice styling touch and speedy look from the side. 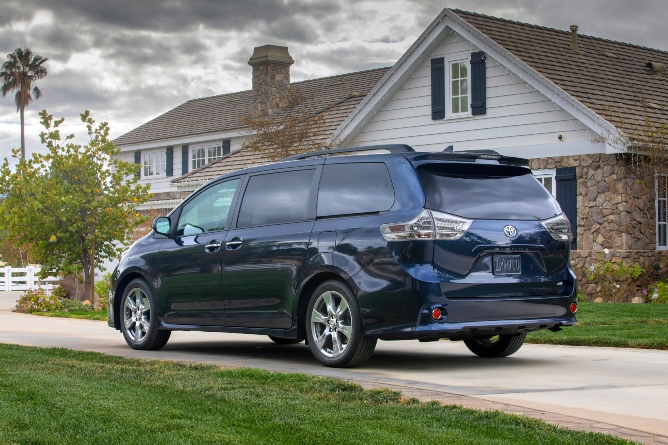 Both interior quality and comfort are a mixed bag.

Being a Toyota, parts quality and materials are more for purpose than for design. The Sienna’s age shows, according to reviewers, but higher trim models are noted to be on par with other competitors. 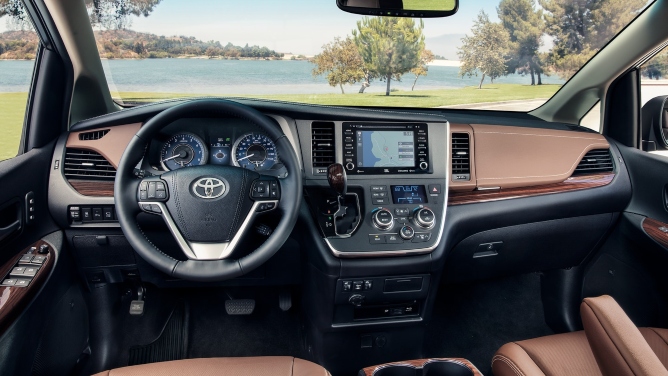 Most reviewers of the Sienna complain about road noise, difficulty reaching controls and storage compartments, and poor ergonomics.

The seats are noted to be comfortable on shorter trips and wearisome as trips progress. Several reviewers note that pressure points are easily exposed on longer trips.

Conversely, the ride quality is noted to be cushy and extremely comfortable.

Reviewers note that the cabin room is spacious. Even the third-row seat can accommodate two adults for a short time. Headroom is lacking in the second and third-row seats due to the Sienna’s sloped roofline, according to testers. 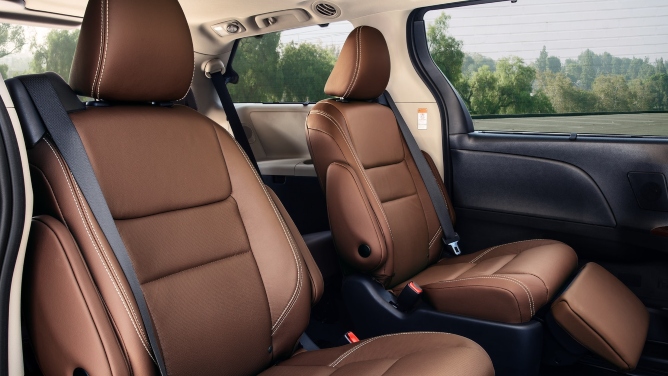 Utility and practicality are both strong areas for the Sienna, especially with its available all-wheel-drive, a class-exclusive feature.

The Sienna offers a spacious cabin and generous storage space with just over 39 cubic feet of cargo space with all seats in their upright position. With the third row folded down, 87 cubic feet of space is available, assisted with power fold-down third-row seats on top trim models.

The cargo area features a low and flat area in which to carry items, and the second-row seats can be taken out to allow 150 cubic feet of cargo area for larger items.

A power liftgate is available for easier entry into the cargo area.

Without the second-row captain’s chairs equipped, the Sienna can seat up to eight passengers with bench seats in both the second and third row, a handy feature for large families. 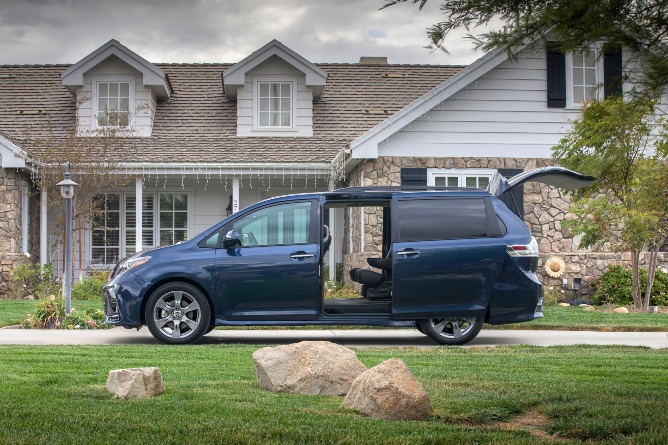 As with most minivans, getting in is easy, according to reviewers. Doors are large with power sliding rear doors as standard on all trims but the base L.

The addition of Apple CarPlay brings the infotainment features up a notch from previous models of the Sienna, but many reviewers are still wondering why Android Auto is not offered. Amazon Alexa compatibility and Siri Eyes Free are both standard in addition to Apple CarPlay.

The Entune 3.0 infotainment system is easy to use, but some controls are noted by reviewers to be overly complicated at times. Some essential functions are difficult to reach within several layers of unnecessary menu options, according to some who have driven the minivan.

The infotainment system operates via a 7-inch touchscreen display and is noted to be responsive and relatively intuitive. 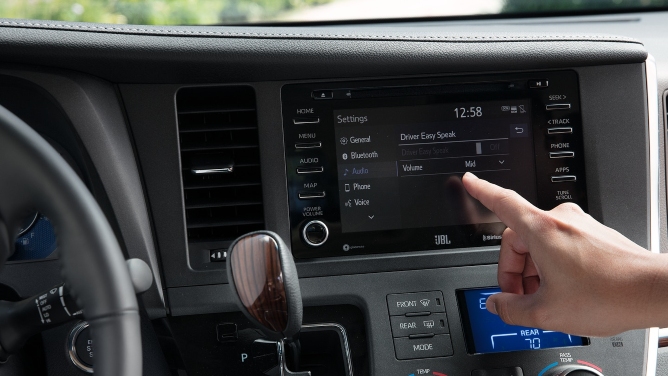 A high definition 10-speaker JBL audio system is available as an upgrade to the standard 6-stereo system. USB ports are plentiful and a dual screen Blu-ray rear entertainment system is optional.

Other notable technology features in the Sienna include a standard Wi-Fi hotspot, basic voice controls, satellite radio, and Driver Easy Speak, a system which allows the driver’s voice to be projected through the rear speakers.

Safety and driving assistance features make a good showing in the Sienna. Each trim comes standard with Toyota Safety Sense.

A LATCH child safety seat system is standard on second-row seats and two out of three third-row seats.

Overall, the Sienna earns good marks for safety. It received a five star overall safety rating from the NHTSA while the IIHS gave the Sienna a top score in four of six safety categories.

The engine and the power it produces is what stands out to reviewers when testing the Sienna minivan. Though not as refined as some of its competitors, reviewers like its linear power delivery and overall performance in spite of its large size.

The Toyota Sienna is only available with one engine option, which is solely mated to an 8-speed automatic transmission.

Its 3.5-liter naturally-aspirated V6 engine, standard on all trims, produces 296 horsepower and 263 lb.-ft. of torque. It provides best in class performance numbers despite falling behind in fuel economy.

Acceleration is also best in class, taking about 7.5 seconds to reach 60 miles per hour.

Several reviewers notice that the Sienna can be temperamental until it warms up, especially the transmission. The Sienna holds revs longer than expected and can be slightly finicky until normal operating temperatures are reached.

Reviewers note that the best driving characteristic of the Sienna is its comfortable ride quality. The suspension is universally praised for being gentle and luxurious, providing an excellent ride.

With this comes a considerable amount of body roll. The Sienna and its competitors are not built to handle, which is expected by all who test the Sienna, but the SE trim does offer a slightly stiffer suspension setup which mitigates some of the Sienna’s bumbling handling.

Steering follows suit with the Sienna’s handling, and most reviewers are disappointed in its light, numb feeling, further exacerbating the minivan’s poor overall handling capability.

Braking is noted to be adequate for normal driving, but again, lacking when it comes to any spirited driving, a characteristic that is dismissed by reviewers as standard for the class.

Reviewers state that brake feel is light, easy, and consistent throughout the length of pedal travel.

Fuel economy is at the bottom of the class due to its available all-wheel drive and high-performance numbers, though its eight-speed automatic transmission keeps it from being dead last.

The Kia Sedona achieves identical fuel economy numbers as the all-wheel-drive Sienna from a smaller 3.3 liter V6, but it is also only available in front-wheel drive.

Even though the Toyota Sienna has the highest base starting price in the class, it is hard to argue against its standard features, traditional Toyota reliability, and practicality.

The Toyota Sienna presents a good value to its buyers, with the additional option to add all-wheel drive boosting its value proposition, even if it comes at a slightly higher price tag.

The Sienna’s highest trim options are on par with the competition in terms of luxury and safety features, and the lowest trims offer many standard features which some competitors do not. Many missing features, such as Android Auto, are annoyances rather than deal breakers.

Toyota Safety Sense is standard on all models, including the base L, with additional safety features available on the higher trim levels of the Sienna.

For those who need it, Toyota even makes the Sienna with a power-operated Auto Access Seat for those who may be physically disabled.

The base model Toyota Sienna L has a starting MSRP of $31,300 with a destination fee of $1,095. That brings the total entry cost of the Sienna to $32,400 with front-wheel drive and the capability to seat seven passengers.

The Toyota Sienna LE starts at an MSRP of just over $34,000 when equipped with front-wheel drive. Destination fees bring the entry price to about $35,200 and adding all-wheel drive costs $2500.

The LE can be equipped with either a second-row bench seat, which allows for up to eight passengers, or two captain’s seats, which allow up to seven passengers. That feature is an available option for each trim level starting with the LE.

The LE Preferred package can be added to this trim and includes blind-spot monitoring, rear cross-traffic alert, and keyless entry and start systems.

The Sienna SE starts at around $38,500 with destination fee included and front-wheel drive equipped.

The SE is the sportiest trim level offered on the Sienna and comes with an upgraded suspension setup for better handling, as well as some subtle front and rear spoilers for a more aggressive look. Unique interior gauges are also fitted to the SE trim.

The SE trim is also offered as a Premium sub-package which starts at just over $44,500.

It includes the features discussed in the LE Preferred package with the addition of a sunroof, rear entertainment system, an upgraded 10-speaker JBL audio system, and Driver Easy Speak system.

The Toyota Sienna XLE starts at $38,500, including destination, with front-wheel drive equipped.

The XLE mimics the SE trim closely and excludes the SE’s sporty additions. The tuned suspension and exterior and interior styling touches are replaced with the regular suspension, imitation-wood interior pieces, and a power-adjustable passenger seat.

The XLE with the Premium upgrade will cost around $42,250.

The Toyota Sienna Limited is the highest trim level offered by Toyota and starts around $45,250 with destination included. Front-wheel drive is standard.

A Premium sub-package can also be added to the Limited which includes a top-down 360-degree view parking camera, a leather third-row seat, HID headlights, and a rear-seat entertainment system. Fully-loaded, a Toyota Sienna Limited Premium will cost over $50,000.