The 2019 Ford Escape is a compact crossover SUV which competes against the likes of the Mazda CX-5, Subaru Forester, Honda CR-V, Toyota RAV4, Hyundai Tuscon, Kia Sportage and Nissan Rogue – to name a few.

New features added to the 2019 Ford Escape include the addition of the SYNC 3 infotainment system as standard equipment on the lower level SE trim, and push-button ignition as standard on both the SE and SEL trims, both of which were only options before 2019. A redesigned, 2020 Escape goes on sale later this year.

The Escape has cemented its reputation as an affordable option for many who want a small SUV and don't necessarily need the third row that many larger SUVs offer.

Well-suited for many small families, the Escape combines quality, versatility, and relatively good performance reviews to make it a rather competent crossover.

The Ford Escape is considered one of the most well-proportioned crossover SUVs on the market.

It doesn't look overly tall or tippy, and its short rear overhang and slightly raked rear window give it a hatchback look rather than that of a more traditional SUV. Of many of the comparable SUVs on the market, the Escape is more akin to a car than an SUV. 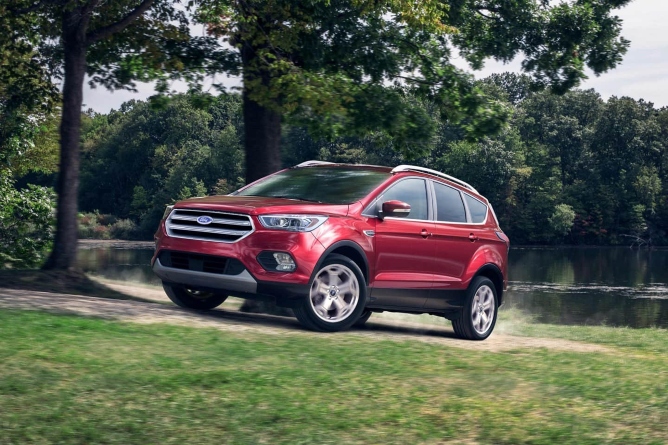 The front fascia quickly gives it away as a Ford product. Its "smiley" face and proportional grille make it look similar to its Fiesta, Focus, Fusion, and Taurus siblings though its lack of projector headlights on lower trims also make the Escape look slightly dated.

Also signaling its value proposition and age are 17-inch steel wheels on the base S trim. Higher trims come with alloy wheels with the highest Titanium trim equipped with large 19-inch wheels.

A sport appearance package is available on the SE and SEL trims, and replaces chrome colored pieces with black trim.

The cabin is not overly swoopy or curved like the most recently redesigned crossovers, yet it is not boxy either.

From the side, the bottom black trim lining gradually increases in size the further toward the hatch it travels, giving the Escape an athletic look. Its character lines make it look ready to move, even when it is sitting still. 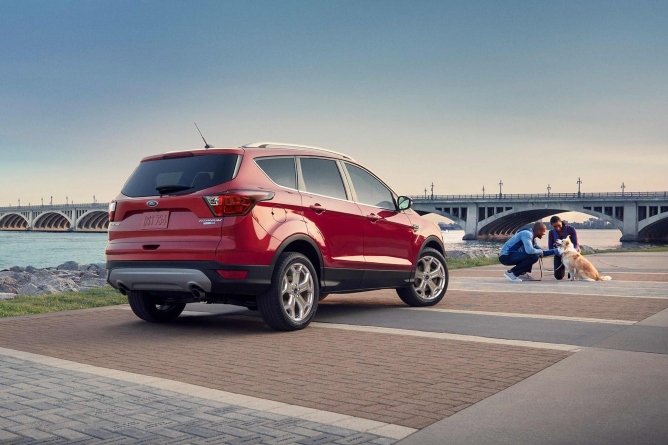 Despite its car-like appearance, the Escape still offers almost 8 inches of ground clearance, a generous amount when compared with the competition.

Interior quality and comfort are average but expected for the price point of the Escape and the class in which it resides.

Testers note that nothing feels overly cheap nor exceptionally plush, though most like the level of luxury the top-level Titanium trim can provide.

The seats are noted to be comfortable with adequate bolstering but are undermined by the ride quality of the Escape. One reviewer from Edmunds states that the ride comfort falls somewhere in between the handling-focused Mazda CX-5 and comfortable Honda CR-V.

Road noise is a noted shortcoming of the Escape. The engine is said to be quiet, but all other outside distractions are easily heard and felt. Climate controls, though ergonomically lacking, are noted by almost all reviewers to be a strong point for the Escape. 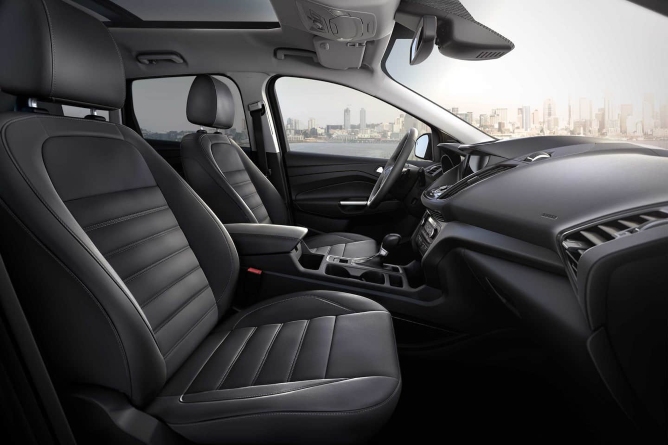 In terms of everyday comfort, the Escape provides reasonable driving comfort but is tuned to be more at home on a twisty road to give some driving fun, rather than being a plush and comfortable highway cruiser. Those used to larger, more softly sprung SUVs may find the Escape too sporty, according to some critics.

Adult reviewers have no issues with headroom or legroom in the rear seats, and getting into the Escape is straightforward and hassle-free.

Utility and practicality are offered as a mixed bag to would-be Escape buyers. 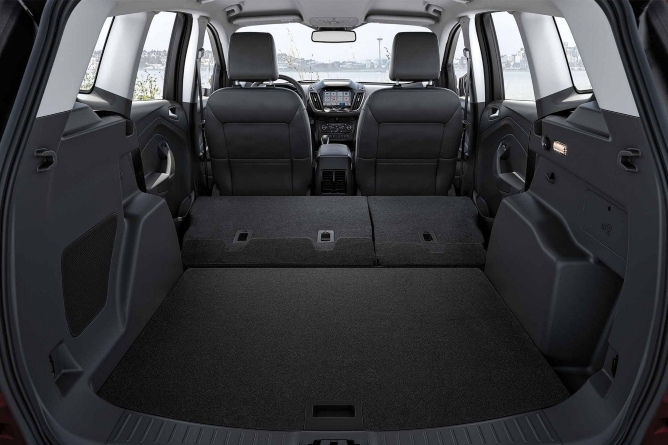 Equipped with 68 cubic feet of cargo space with the 60/40 rear folding seats in their flat position, the Escape offers a good amount of cargo capacity. With the rear seats in their upright positions, it provides 34 cubic feet, falling behind the Honda CR-V, Toyota RAV4 and Nissan Rogue.

Towing capacity is a strong suit for the Escape. When equipped with the Class II Trailer Tow package, both the 1.5-liter and 2.0-liter turbocharged four-cylinder engines can tow more than almost all its competitors, at up to 2000 pounds and 3500 pounds, respectively.

The Escape falls short when it comes to interior small storage space and off-road capability. 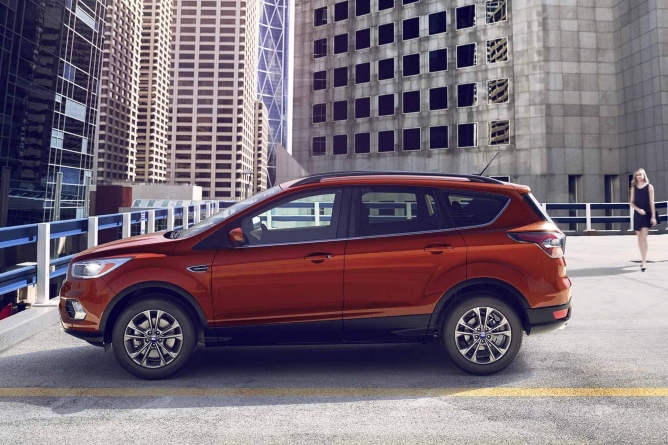 Though it offers all-wheel drive, it can't match the capability of the Jeep Cherokee, Jeep Compass, or Subaru Forester for more adventurous driving.

The technology and infotainment offerings for the Escape also come with mixed reviews.

Ford did improve their SYNC 3 infotainment system with AppLink smartphone integration, but it still isn't standard on all models – and neither is Apple CarPlay nor Android Auto. The base information screen is only 4.2-inches, but an 8-inch touchscreen is available on higher trim level Escapes.

Bluetooth, MyKey parental controls, a rearview camera, air conditioning, and cruise control are standard on all trim levels of the Escape. 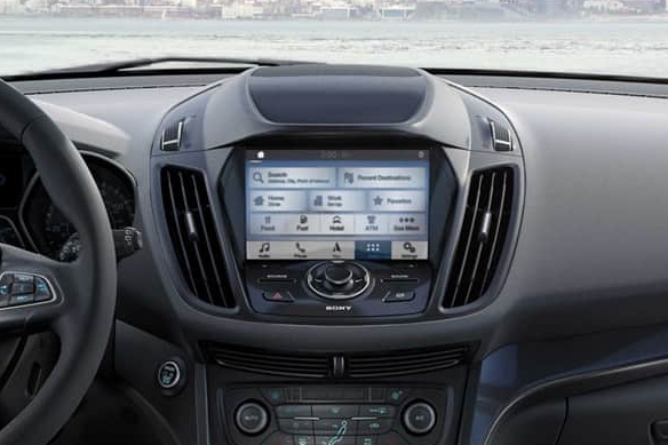 The 2019 Ford Escape falls short in the safety department when compared to the competition.

The National Highway Safety Transportation Administration gives the Escape five stars in all of its ratings except for rollover resistance, in which it earns four stars.

The Escape does offer its Safe and Smart package to its SE, SEL, and Titanium trims which includes blind-spot monitoring, adaptive cruise control, rear cross-traffic alert, lane departure warning, lane keep assist, automatic emergency braking, and forward collision warning. Many of these features have become standard on other competitors.

Driving the Escape is almost universally regarded as an engaging and sporty experience by its testers. Engine noise is kept to a minimum with the more powerful 2.0-liter engine option preferred by many reviewers.

The Ford Escape is available with three engine options.

The only transmission available on the Escape is a six-speed automatic, which many reviewers noted to be slightly slow but acceptable in most normal driving experiences.

Engine response is noted by most to be healthy, even for the base 2.5-liter engine. The turbocharged engine options add even more spunk to the driving experience. Acceleration is lively for the class when equipped with the 2.0-liter turbocharged engine, taking the Escape from 0-60 mph in about 7 seconds. The base engine is much slower and on par with some of the slower competitors in the class at about 9.5 seconds to 60.

Handling is noted to be one of the Escape's highlights, masking its height well with firm shocks. Sharp steering helps provide even more feedback, and reviewers compared the vehicle favorably to a conventional hatchback.

Braking is also rated good, as pedal feel is consistent throughout the pedal travel. Testing revealed a better-than-average stopping distance for the class at 119 feet from 60 mph.

Even though the overall driving experience is universally praised among reviewers, the ride comfort is noted to suffer because of the Escape's superior handling characteristics.

The Escape's fuel economy falls short of many of its competitors. Even with its standard front-wheel drive powertrain, its fuel economy is among the worst in class.

The 2.5-liter engine returns an EPA estimated 21 miles per gallon in city driving and up to 29 mpg on the highway. This engine option is only available in front-wheel-drive.

The 2.0-liter turbocharged four-cylinder engine returns 21 mpg city and 28 highway with front-wheel-drive, and 20 and 27 mpg city/highway with available all-wheel-drive.

The Honda CR-V and Subaru Forester both return a combined 28 mpg from the EPA estimates, while the Toyota RAV4 gets a 27 mpg combined rating. The Escape only manages 25 mpg combined when equipped with the 1.5-liter engine and front-wheel-drive, the best rating it can muster between all of its engine options and powertrain configurations.

The Ford Escape only presents an average value to its would-be buyers, though its value proposition does improve with the well-equipped Titanium model.

The Escape's sporty ride, engaging driving experience, and punchy engine all contribute positively to its value proposition for those who prioritize handling over comfort.

Versatility is also one of the Ford's strengths, as the Escape can tow up to 3,500 pounds when properly equipped. All-wheel-drive is available on most trims, and both cargo and passenger room are adequate without being overly cavernous.

The Escape's value drops off with the lack of standard safety features that have become common on many competitors. Additionally, the average safety scores, especially as given by the IIHS, could be a further potential concern for those who want the safest possible vehicle.

Technology features are only adequate. Apple CarPlay and Android Auto are not standard unless buyers opt for the higher trim levels, Ford's SYNC 3 infotainment system has been improved but isn't among the best in class, and many other technology features standard on competitors are optional upgrades. Fuel economy numbers further decrease the Escape's value as they lag behind many in the subcompact crossover class, and a hybrid option is not available.

On top of all of this, the 2020 Escape could fix many of the safety and technology concerns of the current model, and a hybrid model is planned with the upcoming version. For those looking at the Escape, it could pay to wait a bit for the latest model.

The Ford Escape is available in four different trim options:

The Ford Escape S is the base trim, comes only with the 2.5-liter engine, and is only available in front-wheel drive.

The Escape SE starts at just under $27,600. It comes standard with the 1.5-liter turbo engine and front-wheel-drive. All-wheel-drive is a $1,500 optional upgrade.

The SEL offers everything from the SE trim and adds rear parking sensors, a leather-wrapped steering wheel, a hands-free power liftgate, heated side mirrors, and cloth upholstery with leather accents on the seats.

Packages offered on the SEL include the SE's appearance package and the Sun and Style package, which adds a panoramic sunroof and larger 18-inch aluminum wheels.

The Escape Titanium is the top trim level and is the only trim to offer the 2.0-liter turbocharged engine. It starts at around $33,750, with all-wheel-drive also a $1,500 optional upgrade.

Package options include the Safe and Smart package and the Class II Trailer Tow package, which allows for up to 3,500 pounds of maximum towing capacity.

Fully loaded, the Ford Escape Titanium can top out at around $44,000.