Powertrain: There are three engine options available on the Explorer.

Every engine choice is paired with a six-speed automatic transmission.

Front-wheel drive comes as standard on most trim levels with four-wheel-drive as an optional extra. 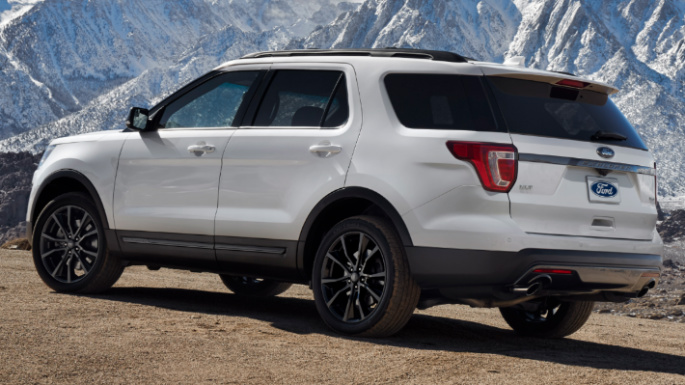 The 2017 Ford Explorer is the fifth-generation of the Explorer line and is one of Ford’s most popular vehicles. Like many midsized SUVs, the Explorer is geared towards owners looking for more space for passengers and cargo, as well as a more refined driving experience.

It features a wide range of safety equipment and passenger amenities, seats up to seven passengers, and it’s powered by three different engine choices, two of them being Ford’s turbocharged EcoBoost models.

The Explorer enjoys name recognition like few others in this class and has been a popular choice for both individual consumers, as well as businesses and government organizations for years.

Front-wheel drive is standard on the Base, XLT, and Limited, while the Sport and Platinum trim levels feature four-wheel-drive as standard.

Every Explorer model (except Base) and be upgraded with four-wheel-drive.

The Explorer Sport is one of the most interesting versions of the Explorer as it puts significant emphasis on the ‘sport’ in SUV. It’s powered by Ford’s 365-horsepower 3.5-liter V6 engine and features improved driving dynamics and higher performance tires. 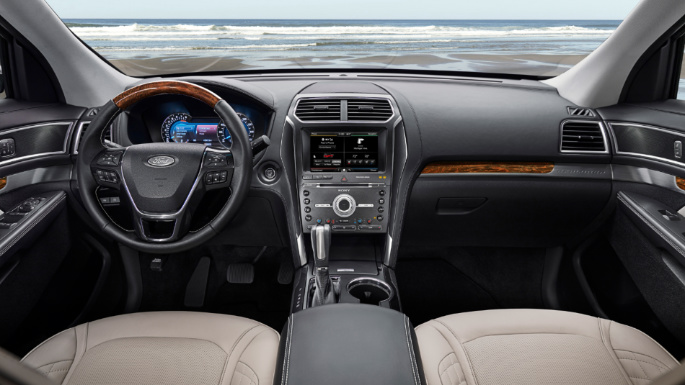 The National Highway Traffic Safety Administration (NHTSA) awarded it a five-star crash rating for overall, front, and side-impact safety. Additionally, the Insurance Institute for Highway Safety (IIHS) awarded the Explorer a ‘Good’ rating in several areas, including side-impact safety and roof strength. However, ‘Poor’ and ‘Marginal’ ratings were given for passenger and driver-side small overlap front crash tests. 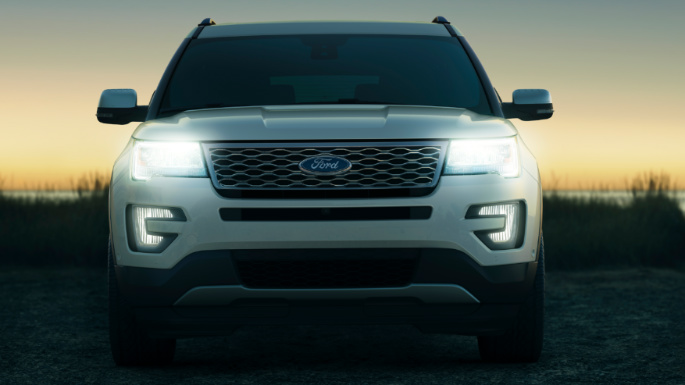 Prices for the Explorer started at $31,660 for the base model Explorer and rise to a hearty $53,235 for the top-of-the-line Platinum AWD Explorer.

Upgrading to higher trims like Platinum increases the Explorer’s price by quite a bit. You do, however, get a lot for your money. Higher tier trims give owners access to things like different appearance packages, different engine choices and safety systems, a touchscreen for the infotainment system, additional entertainment systems, and upgraded interior materials.

Compared to its rivals, the 2017 Explorer represents solid value for the money. Many of the goodies and technology that make this vehicle appealing are optional extras, but prices for other cars in its class were comparable.

There’s no shortage of technology found in the 2017 Explorer. One of its most notable features is the Sync3 infotainment system. The system is user friendly and straightforward and displays plenty of pertinent information.

Starting with the Limited trim level, the Explorer gets an eight-inch dash-mounted touchscreen, and on the Platinum model, rear passengers get their own entertainment system.

Drivers have the capability to adjust how their Explorer deals with different driving situations through the Terrain Management System. Snow making the roads a little dicey? About to drive through some mud on the way to the campsite? Is it raining cats and dogs? You can easily toggle between four different driving modes: Normal, Mud/Ruts, Sand, and Grass/Gravel/Snow.

The one drawback to the Explorer’s technology systems is that the more premium ones (touchscreen, rear entertainment) are only available on the priciest of Explorer trim levels. 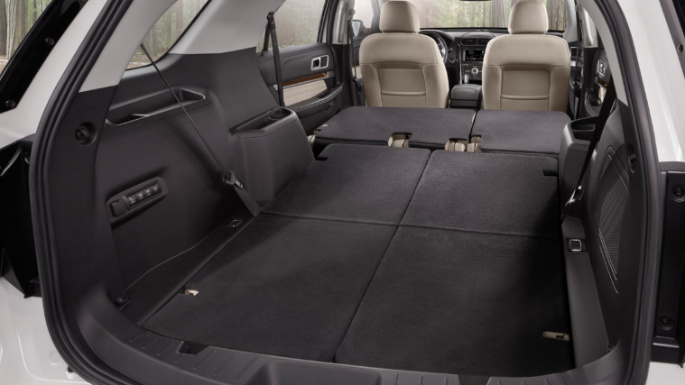 Three rows of seats allow the 2017 Explorer to seat up to seven passengers. Yet the third row is definitely more cramped when compared to the middle row. It’s generally best to use the third row for children or smaller passengers when possible as adults could find it a little uncomfortable. Actually getting into the back seats can also somewhat challenging. The middle row of seats can be upgraded to captains chairs, which reduces the number of passengers but improves the comfort of those still in the car with you.

Cargo volume in the Explorer is very good. Said third-row can be folded and stowed away either manually or powered and increases the Explorer’s cargo space from 21 cubic feet to 43.9 cubic feet. Need more? Fold both the second-row and third-rows down, and that number grows to 81 cubic feet. Other cars in this class, however, do offer more maximum storage space than the Explorer, including the Chevy Traverse, Toyota Highlander, and Dodge Durango.

If you’re looking to tow, the 2017 Explorer has a maximum tow rating of 5,000 pounds. That number should be plenty for most jobs, but it is lower than some of its competitors. 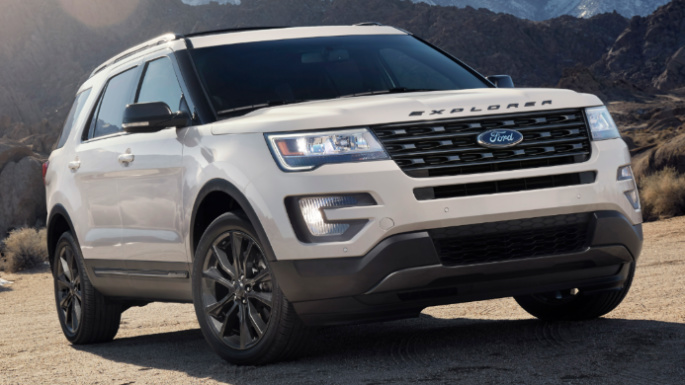 Styling is subjective, but generally the 2017 Explorer is considered a handsome vehicle. Ford reworked the Explorer’s exterior styling for the 2016 model year and the changes made carry over into the 2017 model year. And while the overall design isn’t groundbreaking, the changes are welcome ones. The front end is taught and clean, the scalloping on the sides across the doors help accentuate the wheel arches, and the higher-end wheel sizes and designs help round things out.

The XLT trim package adds 18-inch wheels and a chromed lower front fascia. If you opt for Ford’s Sport Appearance Package, your Explorer will get larger 20-inch wheels, stealthy gray inserts for the front grille as well as at the rear of the vehicle, black cladding on certain areas, and a black roof rack. The Platinum trim includes LED headlamps and a few other distinct touches. 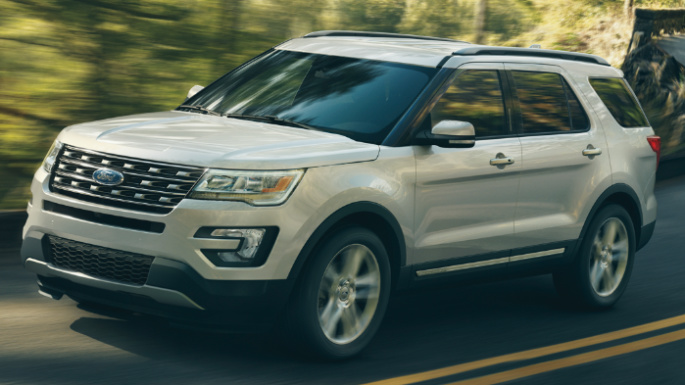 The Explorer drives well, but it does suffer from some outward visibility issues and a case of feeling and driving like it is a larger vehicle than it actually is.

While it does have a driver-adjustable 4WD system that allows for changing how the vehicle handles in low grip situations, the Explorer is more at home on the road rather than off it, which will suit the overwhelming majority of owners just fine.

One of the standout driving features of the 2017 Explorer is its engines. This is by no means a small or particularly light vehicle, but each of the three engine choices provide solid power and performance. The turbocharged four-cylinder motor finds a nice balance between performance and fuel economy, and the base 3.5-liter V6 has ample power and smoothness. Unquestionably, the twin-turbo V6 is the most exciting engine of the three. Its 365-horsepower and 350 pound-feet of torque provides owners with some serious punch and changes the character of the Explorer from family hauler to muscle car as soon as the peddle goes to the floor.

As we mentioned, the Explorer Sport puts significantly more emphasis on driving dynamics and feedback than any other version of this vehicle.

While you’d certainly never confuse this for a sports car, the Sport offers up stiffer suspension and performance tires, along with the aforementioned twin-turbo V6, to provide a spirited and sporty driving experience. 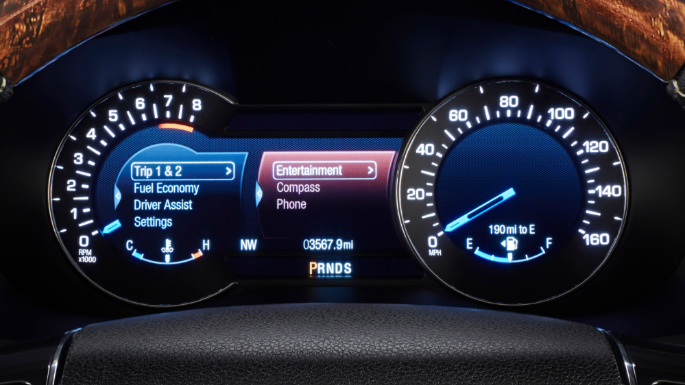 Fuel economy numbers aren’t normally spectacular for midsize SUVs, but the Explorer has respectable numbers, particularly when looking at the front-wheel-drive-only models.

The smallest engine available, the 2.3-liter four-cylinder, returns an EPA estimated 19 mpg city and 27 mpg highway for a combined fuel economy of 22 mpg when paired with front-wheel drive; combined economy only falls by one mpg with the four-wheel-drive powertrain for that engine.

The full-fat twin-turbocharged V6 – only available with four-wheel-drive – returns 16 mpg city, 22 mpg highway, for a combined fuel economy of 18 mpg.

Those fuel efficiency numbers mean the Explorer is competitive in its class, but not class-leading. Some of the Explorer’s competitors offer hybrid versions of their vehicles while the Explorer doesn’t have that option.

Some versions of the 2017 Toyota Highlander Hybrid return a combined economy of up to 29 mpg, while the 2017 Mazda CX-9 in front-wheel drive guise returned 22 mpg city and 28 mpg highway with its smaller 2.5-liter turbocharged inline four-cylinder engine. 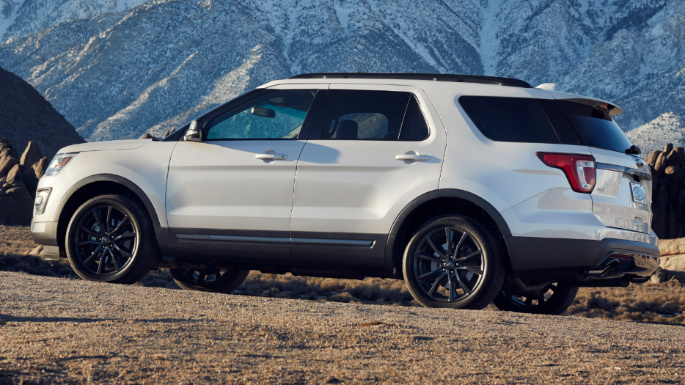 The 2017 base model Ford Explorer has a starting MSRP of $31,660. For that, drivers get the naturally-aspirated 3.5-liter V6 engine, 18-inch wheels, and many of the basic amenities we’ve become accustomed to like cruise control, rear passenger climate controls, power windows and doors, electronically adjustable driver’s seat, the Sync infotainment system, Bluetooth, and a rearview camera.

Step up to the Explorer XLT, and the turbocharged 2.3-liter four-cylinder engine comes as standard, as do fog lights, rear parking sensors, heated mirrors, improved brakes, push-button start, satellite radio, and interior luxuries like a leather-wrapped steering wheel. The sticker price for the XLT is $33,775, and adding four-wheel-drive increases that slightly to $35,925.

Next up is the Explorer Limited, which starts at $41,675 and climbs to $43,825 with four-wheel-drive added. This trim package adds leather upholstery, larger 20-inch wheels, a forward-facing camera to go along with the rear camera, a power tailgate, power-adjustable steering wheel and pedals, dual-zone climate control, heated and cooled front seats and heated second-row chairs, power-folding for the third-row, a larger 8-inch touchscreen, navigation, and a 110-volt outlet.

The most exciting iteration of the Explorer is the Sport. At $43,355, the Sport’s most significant upgrade is the addition of the powerful 365-horsepower twin-turbo EcoBoost V6 engine. Improved suspension tuning, performance-focused tires, standard four-wheel-drive, slightly different exterior looks, and most of the Limited’s amenities round out this package.

At the top of the Explorer family tree is the Explorer Platinum with a starting MSRP of $53,235. Standard equipment includes nearly all the equipment from previous models and adds a heated steering wheel, a dual sunroof, adaptive cruise control, parallel parking assist, a 12-speaker sound system, four-wheel-drive, upgraded interior materials, and a host of additional safety systems. Those include blind-spot monitoring, rear cross-traffic alert, and lane-keep assist. The only optional extras available for Platinum Explorers are an entertainment system for the rear seat passengers and second-row captains chairs.

Which one should you buy? An argument could be made for any version of the Explorer. If it was our money, we would go for the Explorer Sport. It is certainly pricier than most of the other trim packages offered, but the power and torque of the engine, upgraded handling and driving characteristics, standard four-wheel-drive, and improved looks make this already well-rounded SUV even more compelling and interesting.