In production since 1990, the Explorer was the first four-door SUV released by Ford. The 2019 Ford Explorer is part of the truck’s fifth generation originally released in 2011. In 2016, the Explorer received its last notable updates with renewed exterior styling, a larger turbo-charged four cylinder engine, updated audio and climate control settings and a hand’s free liftgate. In January of 2019, Ford announced the Explorer’s sixth generation which is set to be released in 2020.

This model year’s Ford Explorer does not have any major new additions or features. Many reviewers cited the ever expanding mid-size SUV market the Explorer competes in to be extremely challenging.

Competitors such as the Honda Pilot, Toyota Highlander, Chevrolet Traverse and Audi Q7 among others each offer value, performance and comfort advances which often place the Explorer in the bottom third of SUVs reviewed. The Ford Explorer’s three engine options and on-board technology stand out. Some reviewers felt lack of legroom, fuel economy and handling concerns in certain trims to be issues worth considering before a new car purchase .

The Ford Explorer is one of the most recognizable mid-size SUVs on the market today. The base frame and shape of the Explorer remains largely unchanged since 2011. Some reviewers cite the 2019 Ford Explorer’s lack of exterior updating as a setback which makes it harder for this truck to compete against competitors which have been re-styled more recently. 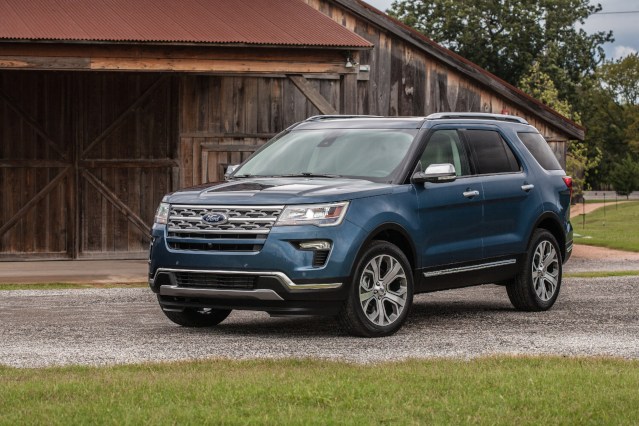 On the outside, the Ford Explorer’s body shape is clean and recognizable with very little adornment or excessive branding elements. Some reviewers highlight that the Explorer looks best with lighter shades of colors combined with larger wheels. Alloy wheels and tinted windows are standard features on all current Ford Explorers.

The Explorer Sport trim comes with a black front grille which makes it look very similar to the law enforcement vehicle, the Ford Interceptor. The Explorer Platinum is matched with LED lights and unique wheels which help it to look more luxurious than other models.

Reviewers found some high and low points when it comes to the Ford Explorer’s interior quality and comfort. Lower level trims of this truck, as might be expected, are unable to match the higher quality look and feel of the upper level trims.

Though there is plenty of seating in any version of the Ford Explorer, many reviewers found that comfort decreases significantly when comparing the front, middle and back row seats. Taller passengers in particular may find it very challenging to ride comfortably in the back seats of the Explorer. 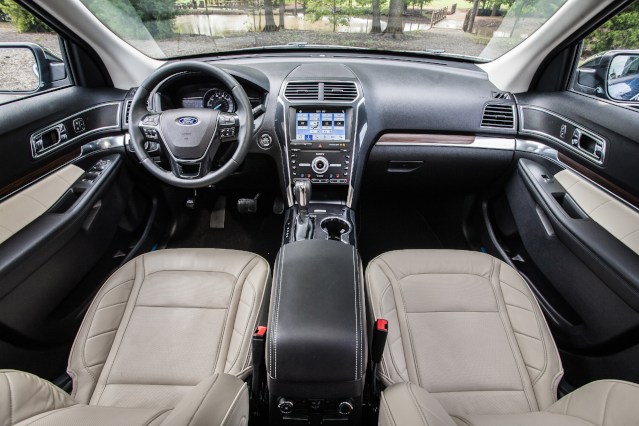 While reviews frequently cite the comfortable and supportive feel of the Explorer’s front seats, they are as likely to mention the stiff and restrictive seatbacks of the back row seats. Comfort in the Explorer may depend on where one is seated in the truck.

The Ford Explorer seats up to seven people with cloth as a standard feature for interior upholstery. Captain’s chairs are an optional upgrade for the middle row of seats. Other potential upgrades include leather seats, power adjustable front seats, a leather wrapped and heated steering wheel, heated and cooled front seats, power folding back row seats, and heated outboard middle row seats.

The Ford Explorer has three LATCH child-seat connectors. In trucks with a middle bench style seat, the middle seat has an upper tether and lower anchors can be used from either side. Reviewers found the Ford Explorer’s LATCH connectors to be fairly challenging to find for inexperienced users.

The Explorer offers plenty of space for passengers in all three rows. The front seats are plush and supportive, but the last row has hard upper seatbacks. 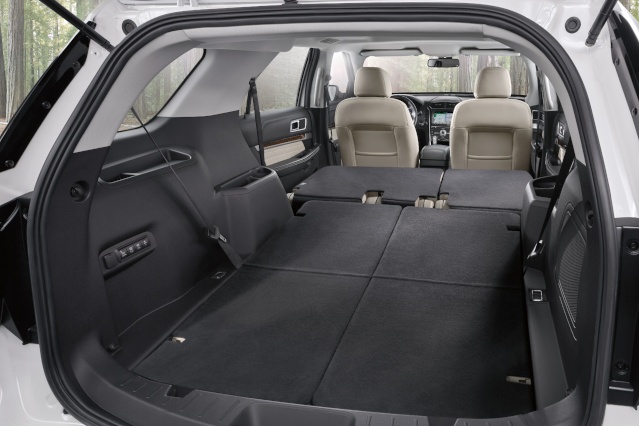 The 2019 Ford Explorer offers one of the largest trunks in the class of mid-size SUVs. 21 cubic feet of space are available when all seats are upright and the vehicle is filled with up to 7 passengers. With the back row folded down, the Explorer has 43.9 feet of cubic space. With the back and middle rows folded down, the Explorer offers a massive 81.7 cubic feet of cargo space. 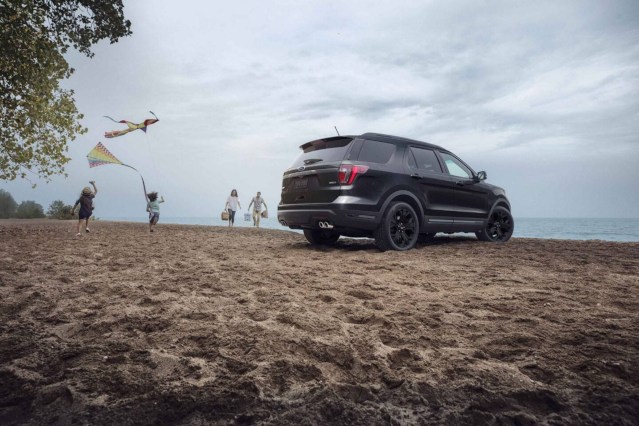 Power folding back row seats and a hand’s free liftgate are possible upgrades which enhance the utility and practicality of this truck. If cargo space is extremely important, this year’s Explorer is a great option to consider.

The Ford Explorer includes a number of technologies which help it to stand out against an increasingly crowded pack of mid-size SUVs. This year’s model features: a rearview camera, the SYNC infotainment interface, a 4.2-inch color display, Bluetooth, a USB port, a six-speaker stereo, and the MyKey system as standard options.

Reviewers cite the layout of the infotainment and onboard technology to be high points which help to make the case that the Ford Explorer is an SUV worth considering. In particular, the SYNC 3 infotainment system has been praised for its simple and intuitive layout. Many reviewers felt this system could be easily and reliably operated by passengers of all ages and ability levels.

Many reviewers cite safety concerns as one of the major red flags which keep the Ford Explorer from entering into the top two thirds of four-door SUVs.

This year’s Ford Explorer has a 3.5 liter V6 engine that pushes up to 290 horsepower. The upgraded engine options are a 280-horsepower, turbocharged 2.3-liter four-cylinder and a twin-turbocharged 3.5-liter V6 that manages up to 365 horsepower. A six-speed automatic transmission is standard in all trims of the Explorer.

Reviewers found all three of the Explorer’s engines to be powerful and well-suited for handling a variety of daily driving situations. Predictably, the strongest V6 engine feels the most muscular and aggressive.

Some reviewers felt that trims below the Sport level suffered when it comes to consistent and reliable handling. The Sport suspension and larger wheels offer a rougher ride with the increased benefit of more nimble handling.

The 2019 Ford Explorer’s standard V6 and optional twin-turbo V-6 engines were cited by reviewers as being particularly inefficient when it comes to conserving gasoline. The optional turbocharged Ecoboost 4 cylinder engine however is able to offer much better fuel economy when compared to the other options.

The 2.3-liter turbo-4 available on the XLT and Limited trims is able to get 19 mpg in the city and 27 mpg on the highway.

Though the Ford Explorer is not one of the most fuel efficient SUVs out there, the turbo-4 Ecoboost engine does help to make a better case for the fuel economy potential of this truck.

Starting at a base price of $32,365, the Ford Explorer has a 3.5-liter V6 engine and front-wheel drive. For an additional $900, the engine can be upgraded to a four cylinder EcoBoost engine. All-wheel drive can be added for $2,150. This truck features cloth seats, a power adjusted driver’s seat, rearview camera, MyKey, a SYNC infotainment system, 4.2 inch color display, USB Port, Bluetooth and six speaker stereo. Satellite radio and rear parking sensors are possible upgrades.

Starting at a base price of $34,400, the Ford Explorer XLT comes with the same standard features and powertrain as the base trim. This trim offers the additional standard features: proximity key entry, push-button start, satellite radio, leather steering wheel, and rear parking sensors.

The XLT can be further upgraded with the following optional packages: Driver Connect, Cold Weather and Safe and Smart.

The Ford Explorer Limited can be upgraded to include a twin-panel moonroof and a rear-seat DVD entertainment system.

The Smart and Safe package comes with all the safety technology of the XLT trim with the added inclusion of: inflatable rear seatbelts, automatic parking assist, and multicontour front seats with a built-in massager.

The Ford Explorer Sport has a base price of $46,625 and comes with a V6 EcoBoost engine and four-wheel drive as standard features. This trim includes extras such as a sport suspension, a towing package, and off-road upgrades like hill descent control and a terrain management system.

The top of the line Ford Explorer Platinum starts at $54,165. This trim is loaded with every feature available on lower trims and also includes: premium Nirvana leather interior, a twin-panel moonroof, an upgraded Sony stereo as well as all the driver assistance and safety upgrades.