The Ford Mustang is a series of American muscle cars manufactured by the automaker Ford. The Mustang is one of the longest-produced Ford car nameplates and has been in continuous production since 1964. Commonly referred to as the "Pony Car," the Mustang was manufactured as a highly-styled line of sporty coupes and convertibles initially distinguished by its long hood and short deck proportions.

The success of the Ford Mustang launch sparked the growth of several competitors from other American manufacturers, including the Pontiac Firebird, AMC Javelin, Dodge Challenger, and the Chevrolet Camaro.

From 1964 until today, the Ford Mustang's automotive history is stacked with an impressive lineup of high-performance sports car models. 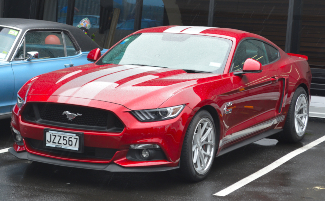 Changes for the sixth generation include a wider body, increased passenger space, a new grille, new exterior colors, and a 2.75-inch lower decklid.

The 2018 model saw a minor redesign to the exterior, and the engine lineup was revised. The 2.3-liter EcoBoost engine replaced the 3.7-liter V6 and served as the base model for the lineup. The 5.0-liter V8 gained some power and now produces 460-horsepower. Finally, the automatic transmission in both engines became ten-speed.

For 2019, Ford revised some key components on the Shelby GT350; however, it was later discontinued at the end of the 2020 model year.

In 2019, Ford announced the Ford Mustang Mach-E, an entirely new Mustang to join the lineup. It is an electric crossover with rear-wheel drive and all-wheel-drive.

The 2020 model year re-introduced the Mustang GT500 with an impressive output of 760-horsepower. We reviewed one back in 2019 -- including some time on the track -- and found it a surprisingly civilized beast when you want it to be, but plenty capable when you turn the dial up to 11.

The California Special Package adds scoops on the rear fenders, stripes, and grille. On the inside, the Mustang has a few retro design elements incorporated into the modern cabin. 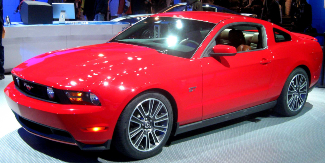 The 2005 model year welcomed the fifth-generation Mustang. It was manufactured on the new D2C platform that resembled the styling of the first-generation Mustang. From 2005 until 2010, the base Mustang featured a cast-iron block 4.0-liter V6 engine with 210-horsepower. The Mustang GT used an aluminum block 4.6-liter V8 engine with 300-horsepower. Five-speed manual transmission remained standard for the series, with the five-speed automatic transmission an option.

Designed by Carroll Shelby, the Shelby GT500, with a 5.4-liter supercharged V8 block engine and an output of 500-horsepower, entered the lineup for the 2007 model year.

The 2010 model year featured a redesigned exterior with sequential LED taillights. The base model engine carried over while the GT's 4.6-liter V8 engine improved to produce 315-horsepower.

For 2011, the engines and transmission options were revised with the introduction of a six-speed manual and automatic transmission and a new 3.72-liter aluminum block V6 engine.

2012 welcomed a new Mustang Boss 302, and 2013 launched an update to the Shelby Mustang GT500, which had a larger 5.8-liter supercharged V8 engine producing 662-horsepower. It became the first Mustang to produce more than 600-horsepower. 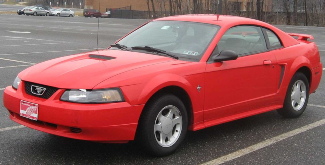 1994 opened the pathway for the fourth-generation Mustang and marked the 30th anniversary of the original Mustang. Ford commemorated the occasion with a new lineup of models. Resembling the first-generation Mustang, Ford produced the new SN-95 Mustang. After fifteen years, it was an all-new Mustang with a complete redesign, based on the rear-wheel-drive Fox platform (known as the Fox-4). 1994 also marked the first year that the notchback coupe model wasn't part of the lineup.

The base model featured a 3.8-liter V6 engine. A 5-Speed manual transmission was standard, but 4-speed automatic transmission was an available option. After nearly thirty years, Ford retired the small-block V8 engine and replaced it with a newer 4.6-liter V8 engine for the 1996 Ford Mustang GT. This engine carried an initial rating of 215 bhp, but in 1998, it increased to 225 bhp.

1999 welcomed a few upgrades and changes, including the introduction of Ford's New Edge styling theme with larger wheel arches, creases in the bodywork, and sharper contours. The powertrains carried over into 1999, but they saw new improvements and took the 4.6-liter V8 engine to 260 bhp. 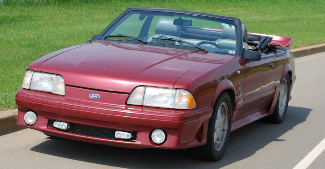 The engines which carried over from the Mustang II were the 2.3-liter four-cylinder, 2.8-liter V6, and the 4.9-liter V8. A 2.3-liter turbocharged four-cylinder engine was also available during initial production; however, it was troublesome and underwent improvements to reappear as the 1983 Ford Mustang Turbo GT.

1982 welcomed the return of the Mustang GT, which replaced the Cobra and used a high-output 4.9-liter engine.

For the 1983 model year, the front fascias of all Mustang models saw a complete redesign and featured new grilles and, for the first time, the blue oval Ford emblem.

1984 introduced the high-performance Mustang SVO to the lineup with its 2.3-liter turbocharged and intercooled four-cylinder engine.

A mid-cycle refresh occurred for the 1987 model year, including changes to the interior,

Closing the third-generation Mustang series was the 1993 Ford Mustang SVT Cobra and Cobra R. They were special additions to the lineup of sports cars. 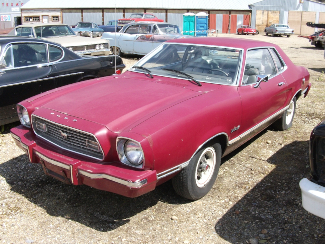 The 1974 model year welcomed the second-generation Mustang and introduced the "Pintostang." The new offering was designed on the Ford Pinto platform, better known as the Mustang II, and was smaller and more fuel-efficient.

Engine variants for the second-generation Mustang included the 2.3-liter, four-cylinder engine from the Pinto and the 2.8-liter V6 from the Mercury Capri.

1975 re-introduced the 4.9-liter V8 engine, which was only available with automatic transmission.

The 1978 model year deterred from the fuel-efficient Mustang II and introduced the flashy Cobra II and King Cobra Mustang. The hot rod community favored these Mustang models with the addition of tubular a-arms, rack-and-pinion steering, coil springs, and a compact independent front suspension. 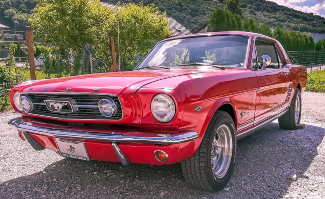 Early production models, often called "1964½ models," were released before the 1965 model year, but all models were VIN coded and titled by the automaker as 1965 models, despite some minor design updates. The original Mustang was derived from the 1960 Ford Falcon compact and was introduced to the public in 1964 at the New York World's Fair.

Two body styles were available initially, including a two-door hardtop and a convertible. Shortly afterward, a "2+2" fastback joined the lineup.

The powertrain for the first generation Mustang consisted of a 2.8-liter straight-six engine and a 4.3-liter V8 engine with 164-horsepower. These engines quickly saw an upgrade before the traditional opening of the new model year; the six-cylinder became a 3.3-liter engine, and the V8 became a 4.7-liter engine with 210-horsepower.

For the 1967 model year, the Fastback body style changed, and the 1968 version of this model appeared in Steve McQueen's famous movie, Bullitt. A new 4.9-liter V8 engine designed with Federal emissions regulations in mind entered the lineup for 1968.

The model years 1969 and 1970 introduced new trim and performance packages, including Mach 1, Boss 302, and Boss 429. These two model years are some of the most desired models for classic car collectors and are known as the original "Pony Cars."