Ford’s Ranger is best-known as its compact pickup truck that’s been built for four generations in the U.S. (with a fifth Ford Ranger generation due soon). But the automaker has also used the name for a trim package on the larger F-Series trucks; the name originally appeared as a model under the Edsel brand in the late 1950s. A version of the Ranger was also sold by Mazda as the Mazda B-Series. 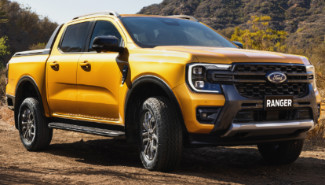 In 2023, the Ford Ranger is going to be getting a complete redesign. While details about this new Ranger hasn’t been released yet in North America, our intel comes from the global version.

The drivetrain is said to be the same 2.3-liter turbocharged four-cylinder that is in the current version and the standard configuration will be rear-wheel-drive. The available transmissions are most likely going to be a six-speed manual and 10-speed automatic. It is also rumored that there will be a hybrid powertrain available, as well.

There will be two body styles available: a crew cab four-door version and an extended cab with two half doors in the back. There is also a distinct possibility of a potential Raptor variant of this new Ranger as well. The interior will have a completely redesigned touchscreen infotainment system and an optional one that is vertically-oriented and very similar to the one that is currently in the Edge SUV. 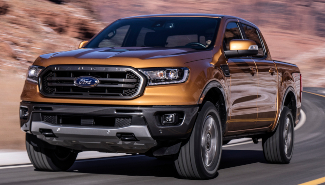 For 2019, the fourth-generation Ranger was reimagined as a midsize pickup for the North American market, comparable in size to Ford’s Explorer Sport Trac and set to compete against the Toyota Tacoma and Chevy Colorado. The T6 was available in a SuperCab model with 2+2 doors, extended cab and six-foot bed, or SuperCrew with a four-door, crew-size cab and a five-foot bed. It features a new grille and frame-mounted steel bumper as well as an aluminum hood. The aluminum tailgate had a high-mounted handle and a spoiler. It featured a two- or four-wheel-drive configuration and a 2.3-liter turbocharged EcoBoost four-cylinder gas engine mated to a ten-speed automatic transmission.

For the 2020 model year, the Ford Ranger got a new package, the FX2, which was an off-road-oriented model with an electronic locking rear differential and a newly tuned suspension. The Ranger also got new accessories like a pickup box extender and new available colors such as Iconic Silver, Rapid Red Metallic Tinted Clearcoat, and Race Red.

In 2021, there were very few changes to the Ranger aside from the addition of the Black appearance package, which included black wheels and a black grille.

For the 2022 model year, the Ranger saw the introduction of the Splash appearance package, which was available on the XLT and Lariat trim levels. This package featured orange and black body graphics and had a retro nineties aesthetic. 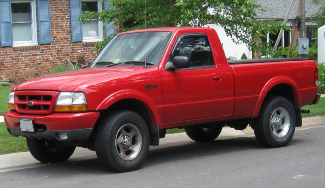 Ford gave this third generation a significant overhaul including a longer wheelbase and longer cab, though the interior design remained largely unchanged.

The inline four-cylinder engine was increased to 2.5 liters from 2.3 liters and it now made 117 horsepower. A 3.0-liter V6 engine was optional as was a larger 4.0-liter V6.

This generation boasted a larger rear window for better visibility as well as new seats, more legroom and more room to recline. A new short/long-arm front suspension, longer wheelbase and solidified frame top the list of changes for 1998.

2001 saw the addition of a 207-horsepower 4-liter V6 in place of the previous 4.0-liter V6 and the addition of ABS on 2WD Rangers. These changes increased the truck’s towing capacity to over 6,000 pounds. The base engine was changed to a 2.3-liter Duratec inline four-cylinder.

In 2004 Rangers got a new grille, front bumper and hood, plus optional leather upholstery and a CD player.

2007 brought the addition of new standard features ranging from a Personal Safety System and anti-theft system to tire-pressure monitoring and an auxiliary audio jack. The lower anchors and tethers for children system known as LATCH was added in 2008 and a sensing system was added so that airbags would not deploy when small children are on the passenger side. 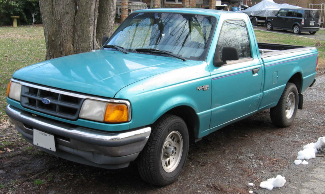 In 1993 Ford updated the second generation of the Ranger, giving the truck’s lines a facelift with a smoother, more rounded and aerodynamic profile. A new grille was featured on the 4x4 model. Engine choices included a 98-horsepower, 2.3-liter four-cylinder, a 145-horsepower 3.0-liter V6, and 160-horsepower, 4.0-liter V6.

Interior changes included new seats which plus an armrest. The Ranger also got an upgraded instrument panel as well as an improved sound system and a high-mounted third brake light in the rear window.

Ford made a handful of changes to the Ranger for the 1995 model year. The base four-cylinder engine was bumped up to 112 horsepower from 98, a driver’s side airbag was added, as was a double-din stereo unit and the transmissions were upgraded. ABS was optional for the 4x4 and standard on trucks with the 4.0-liter engine. 1996 brought a passenger-side airbag that could be deactivated for using a baby seat. 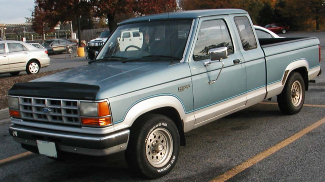 Launched in 1982 as a 1983 model, the first generation of the Ranger was the first compact size pickup designed by Ford, replacing the Courier that was built with Mazda.

This Ranger was available with rear-wheel-drive or as a 4x4 and there were two wheelbases and bed sizes to choose from: The 108-inch wheelbase truck with a six-foot bed, or the 114-inch wheelbase version with a seven-foot bed.

The 4x4 model could haul up to 1,600 pounds and had independent front suspension.

Available transmissions ranged from a four- or five-speed manual to a three-speed automatic.

1986 saw the addition of a 140-horsepower fuel-injected 2.9-liter V6 and the SuperCab, with an extended cab and wheelbase of 125 inches. The rear cab area had space for optional jump seats, which increased the passenger capacity to five on this model.

A 1989 mid-cycle upgrade brought frame improvements as well as interior and exterior styling revisions. A new dashboard and glove box were added and external changes included a new grille, hood and front fenders with flush-mounted halogen headlights and wraparound parking lights. Antilock rear brakes became standard with this update, and the new base engine was a 100-horsepower, 2.3-liter four-cylinder with a standard five-speed manual or optional four-speed automatic transmission.

The 4x4 model could be optioned with a 160-horsepower, 4.0-liter V6 with a standard five-speed manual transmission or optional heavy-duty four-speed automatic.

The SuperCab model got a larger gas tank, going from 16.3 to 20 gallons.

1991 brought a Sport model with aluminum wheels and the option of a 140-horsepower 3.0-liter V6 engine for 2WD trucks. Another new option was a 60/40 split bench seat.