The Terrain is a compact crossover made by GMC -- a brand under the General Motors umbrella. The Terrain shares many of its components and platform with other GM models including the Cadillac SRX and Chevrolet Equinox. The Terrain is currently in its second generation. 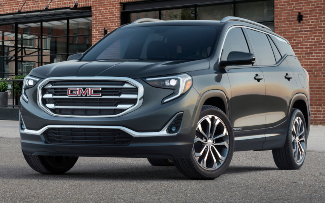 The second-generation GMC Terrain debuted in 2018 and sought to significantly improve the previous model's driveability, interior quality and technology.

This new model shrinks by just over three inches in overall length and sheds roughly 400 pounds though legroom and headroom aren't compromised. Interior ergonomics have been improved, as has the infotainment system and dashboard design.

This generation Terrain comes in three trims: SL, SLE and SLT, with another luxury-oriented model under the Denali subbrand.

The SL is powered by a turbocharged 1.5-liter, four-cylinder engine with 170 hp output and 203 pound-feet torque. It's paired with a nine-speed automatic transmission on standard front-wheel-drive models and buyers can add optional trailer abilities.

The SLT trim comes with the Driver Convenience and Infotainment I packages as well as leather upholstery. You can choose to upgrade to the Infotainment II, Driver Alert I or Driver Alert II packages which add on automatic braking, automatic high beams and lane departure warning. The Preferred package then includes power passenger seat, a heated steering wheel, driver-seat memory settings and a power lift-gate.

The SLE and SLT trims have the same 1.5-liter engine as the base model but also offer an optional, more powerful gas engine. This turbocharged, 2.0-liter four-cylinder engine has 252 horsepower output and 260 pound-feet torque.

The SLE and SLT also offer an optional turbocharged 1.6-liter, four-cylinder diesel engine with 137 horsepower output and 240 pound-feet torque, paired with a six-speed transmission. Choosing this engine also gives you the Preferred package for the SLT and Driver Convenience package for the SLE trim.

At the top of the range is the Denali, which is essentially a luxury subbrand for all GMC vehicles. This model had additional chrome exterior trim including the unique 19-inch alloy wheels and the grille plus LED headlights. The interior trim is upgraded and a panoramic sunroof is added. The Denali also bundles in the Driver Alert I and Preferred packages together. Denali models come standard with the 2.0-liter turbocharged four-cylinder gas engine.

All three of the GMC Terrain's engines come with a standard front-wheel drive which can be upgraded to shift-on-the-fly all-wheel-drive. 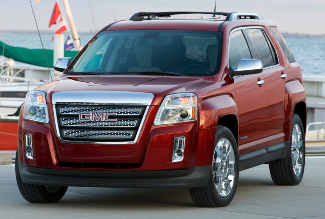 GM introduced the Terrain in 2010 to sit in the middle of the midsize and compact crossover segments. It seated up to five passengers and aimed to lure buyers in with promises of sophisticated driving manners, stylish cabin, ample standard features and versatile backseat.

The SLT-1 came with all the features of the SLE-1 plus leather seats, remote engine start and heated front seats.

Depending on the trim level, you could also opt for an advanced, hard-drive-based navigation system and a rear-seat entertainment system.

In 2013, GMC introduced the Denali trim with satin chrome accents and a unique chrome grill. In 2016, GMC gave the Terrain a face-lift with new LED daytime running lights and revised front and rear fascias.

Under the hood of all trims was a standard 2.4-liter, four-cylinder engine with 182 horsepower and 172 pounds-feet torque. With the exception of the SLE-1, all other trims could be upgraded to a 3.0-liter V6 with 264 horsepower and 222 pound-feet torque. Both engines had front-wheel-drive with an optional all-wheel drive and a six-speed automatic transmission.