The Honda Accord has become a byword for the American midsize sedan. And, in fact, it’s been built in the US for decades now.

But it didn’t start out that way. Honda decided there was room for a vehicle larger than the Honda Civic and brought it to the US in 1976. Some derided it as an economy car, but it might have been the nicest economy car of the ‘70s. Its quality and advanced features, and later its near-faultless reliability, made other automakers stand up. And car buyers took notice.

Since then, the Accord has grown larger and more refined, but it retains its reputation for quality and even its fun-to-drive nature. 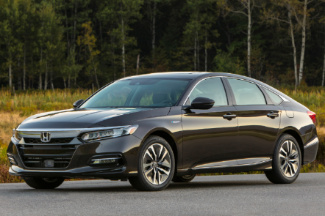 The tenth-generation Honda Accord debuted in 2018 and marked some significant changes for the long-running model line. It was more sophisticated in terms of appearance and technology, now including features like an NFC connector, adaptive suspension dampers, and a head-up display.

The coupe variant was dropped, leaving the Accord available only as a four-door sedan. Also, the V6 option was cut, replaced by a 2.0-liter turbocharged four-cylinder with 252 horsepower.

Also new was a 1.5-liter turbocharged four with 182 or 190 horsepower, depending on trim. Unlike pretty much all of its peers, a manual transmission remained available. A gas-electric hybrid model returned, powered by a four-cylinder engine and producing 212 horsepower.

Externally, the Accord adopted a lower, sleeker profile that made it appear more sporty than the previous model, something many rivals were doing as SUVs like the Honda CR-V became the top-selling family vehicles.

There were few changes until 2021, when the Accord received slightly revised exterior styling, including revised wheels and headlights. Trim levels were jumbled and standard equipment shuffled, but the manual transmission was no longer available on any model. The Accord was one of the last midsize cars to offer a manual. 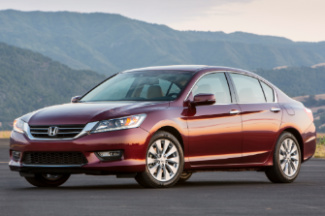 Honda substantially redesigned the Accord for 2013, making it smaller on the outside while keeping it nearly as spacious inside. New technology features included standard backup cameras, forward collision warning, lane departure warning, and the LaneWatch camera system.

Honda also improved the crash protection of the Accord significantly over the previous model but managed to address concerns that the old one was too big and boring to drive.

A hybrid version returned for the first time in almost a decade, this time using a four-cylinder engine. But for the first time, there was a plug-in hybrid (PHEV) Accord. Only available in 2014 in certain states, the PHEV model hardly found buyers. So Honda revived the standard hybrid model for 2017, but with significant efficiency improvements. 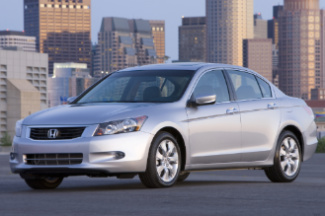 The 2008 Accord ballooned in size, with the sedan qualifying as a Large Car by the EPA. Length increased by as much as four inches and width by three.

The DX was gone, so LX models used a 177-horsepower four-cylinder and five-speed automatic or five-speed manual, while the EX and higher trims got a 190-horsepower version of that engine. V6 models produced between 268 and 271 horsepower, except for the EX-L Coupe that could be had with a six-speed manual.

New features that debuted on the eighth-generation Accord included a rearview camera with navigation system and a USB connection. A loosely-related Accord Crosstour crossover was released for 2010.

A light update for 2011 and improved fuel economy for the four-cylinder was added, but this generation of the Accord went five years with minimal changes. 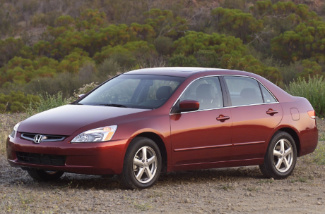 For its seventh-generation Accord, Honda increased the size of the coupes and sedans, as well as gave it a more upscale appearance and new technology. While the four-cylinder engine gained a few horsepower to 160, the V6 gained 40 to produce 240 – a class-leading number at the time.

Both the sedan and coupe had more sophisticated styling than before, but the coupe diverged even more from the sedan, looking more like an Acura model.

For the first time, satellite navigation, electronic stability control, and side curtain airbags could be had on an Accord. LED taillights were even introduced during this generation’s run, previously something found only on luxury cars. In 2005, an Accord Hybrid was offered for the first time. It used the V6 mated to an electric motor, providing good performance but not much more efficiency than a regular V6. 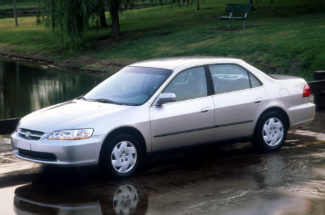 Honda redesigned the Accord for 1998 to make it larger and more powerful, which let it better compete as one of the best-selling cars in the US.

The wagon was discontinued, but the Accord coupe was given a sportier exterior design compared to the conservative-looking sedan. All models grew larger and the Accord was now considered a midsize sedan by the EPA, just like the Ford Taurus and Toyota Camry.

The four-cylinder engine grew to 2.3-liters but made the same power, while the new 3.0-liter V6 offered 200 horsepower, among the highest output of any midsize sedan. Four-cylinder models still offered a five-speed manual, but most models received a four-speed automatic. 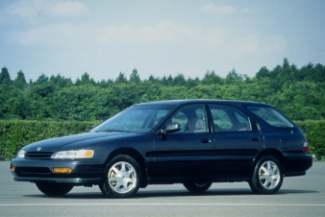 In its fifth generation, the Accord grew even more refined. More stylish inside and out, with better materials and updated technology, the Honda looked more like a premium rival against its American rivals.

The angular design was replaced by a rounded shape like that of the Prelude sports coupe of the time. Coupe, sedan, and wagon models were offered again. Dual airbags were now standard, as was a wider availability of anti-lock brakes. An integrated cellular phone was also offered.

A 2.2-liter four-cylinder with between 130 and 145 horsepower was offered, higher powered models using Honda's new VTEC technology for better performance. But for 1995, the Accord sedan was for the first time offered with a 2.7-liter V6 engine with 170 horsepower.

Still one of the most popular vehicles sold in the U.S., the Accord changed very little in this generation. 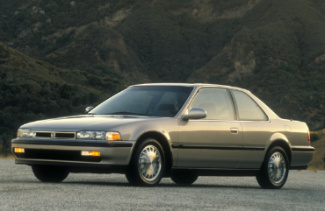 Honda updated the Accord for the 1990s with more refinement and room, a winning trend since the previous model eventually marched to be the best-selling car in the U.S. The coupe and sedan grew again by another 6 inches and were also noticeably wider. The hatchback was dropped, but a five-door wagon soon took its place as both the Ford Taurus and Toyota Camry offered a wagon.

All Accords were now fuel-injected, powered by a 2.2-liter four-cylinder with up to 130 horsepower on the new EX model. Features such as leather upholstery and a sunroof were now part of the options list, as well as some models that received a high-end Bose audio system and anti-lock brakes. In 1992, the Accord received a driver’s side airbag, while some versions of the 1993 model were the first Accords to feature one for the passenger — advanced for safety features among family sedans in the early ‘90s. 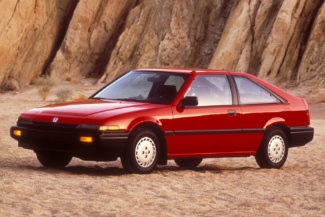 The Accord grew substantially with the third generation, moving firmly out of its economy car roots and competing with mainstream sedans. As well as a hatchback, a two-door coupe was added for 1988. But the most popular sedan was roughly 6 inches longer than the previous model and boasted more sophisticated styling, complete with sports car-like pop-up headlights.

The body was also made more aerodynamic to improve styling and interior noise, while interior space was usefully expanded. And a redesigned suspension made the Accord better to drive at high speeds, which gave it a reputation for being fun to drive among enthusiasts. A new 2.0-liter engine produced 98 horsepower with a carburetor or 110 with fuel injection. 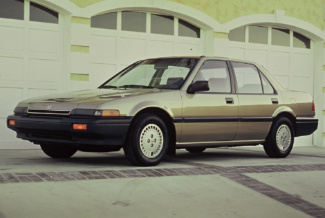 Honda continued with its popular format with the next Accord.

Buyers got more power and more room, as well as more technology. Models offered items like a cassette player, velour upholstery, and power windows and locks. The 1.8-liter four-cylinder engine now produced as much as 86 horsepower and could be had with a four-speed automatic now. In 1985, the limited production SE-i model was among the first mainstream cars to come equipped with electronically controlled fuel injection, allowing the engine to make 110 horsepower.

This generation Accord is significant because it was the first to be built in the U.S. Honda established an assembly plant in Marysville, Ohio in 1982, helping its factory in Japan supply Accords for the American market. Since then, Honda has become one of the largest auto producers in the U.S. 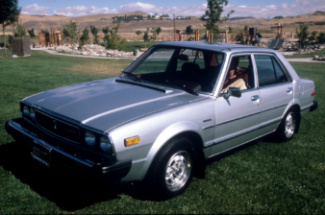 Hardly what American automakers considered “midsize” in the ‘70s, the Accord was introduced in 1977 as an expansion of the popular Civic line. But it was also significantly more upscale than domestic products, yet more attainable than small models from brands like Audi and Saab.

The first Accord hatchback (a sedan was added for 1978) was still smaller than the 2022 Civic hatchback, it offered equipment more commonly found on luxury cars in the U.S. These included full cloth seats, AM/FM radio, a digital clock, air conditioning, and power steering. Even a five-speed manual was standard, although a two- or three-speed automatic was available.

A Special Edition model even received power windows and leather upholstery. Initially, the power came from a 1.6-liter four-cylinder that produced 68 horsepower, using emissions-cutting technology from the Civic.

Odd as it may have seemed to analysts, the Accord found favor with buyers who wanted good fuel efficiency and a vehicle that offered greater luxury than the typical Japanese economy car.