The first modern midsize car from Mercedes debuted in 1953. Known as the Mercedes-Benz 180 or W120, it went through five generations before a rebranding of the line in 1993 created the current E-Class.

Mercedes’ E-Class luxury models and their predecessors have long been among the brand’s most popular models due to their quality, performance, and longevity and are designed to compete with other luxury leaders like BMW, Porsche, and Audi. 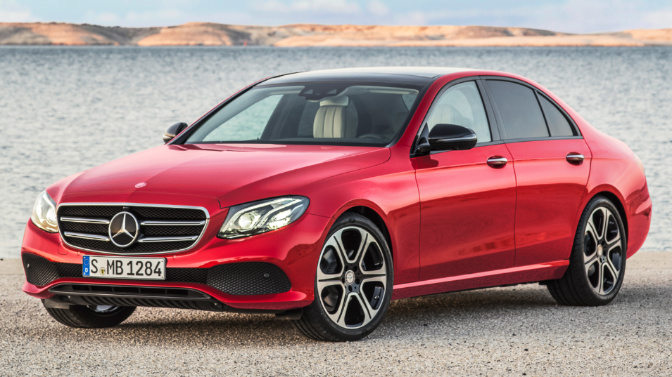 Mercedes spread the introduction of their fifth generational redesign over two years, starting with the four-door sedan and wagon styles in 2017 and then followed by the two-door coupe and convertible styles in 2018.

The new generation debuted with four trim levels: the E300, E400, E550, and AMG E43, and AMG E63 S performance variants, with numbers, indicating which engine is found on each model.

All standard models come standard with rear-wheel-drive (AMG models are all-wheel-drive), and the standard transmission was changed from the seven-speed to a nine-speed automatic. The generational redesign brought another styling update, with the elimination of the four-headlight look entirely, opting for a more market-standard look and grille.

For the interior, Mercedes modified the design to be similar to the S-Class. Additionally, stand tech features include PreSafe, Mbrace telematics, voice controls, a navigation system, and Apple CarPlay and Android Auto.

In 2020 the E300 was bumped to the E350, gaining 15 horsepower on a new engine. Emergency braking is also added as a standard safety feature for 2020 models.

For the 2021 model year, the Mercedes-Benz E-Class was updated with a front and rear facelift on all models including the E-Class coupe, E-Class Sedan, and the Cabriolet, and a new design for the steering system that is weighted to be balanced and responsive.

However, the biggest update in 2021 came with the powertrain. The E450 switched over to a turbocharged inline-six engine with a 48-volt hybrid system. This has a combined horsepower of 362 and 369 pound-feet of torque. This model year also saw the addition of the Mercedes MBUX infotainment system as a standard with Apple CarPlay and Android Auto. 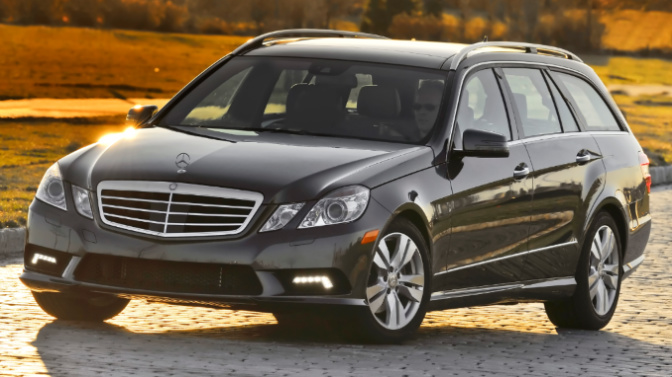 The fourth-generation E-Class debuted for the 2010 model year with a full redesign. In addition to the standard sedan body style, a coupe body style was available for the E350 and E550 trims, although not for the E63.

This new generation also received a thorough styling update that left the circular quad headlights behind in favor of a more angled and aggressive overall design. The 2010 models also cost significantly less than their 2009 counterparts, while still adding features like a seven-speed automatic transmission, auto-dimming mirrors, COMAND electronic interface system, Bluetooth, and an eight-speaker stereo as standard.

2011 saw the return of previous variants, including the wagon body style, a diesel engine option for the E350, and a new convertible option. Standard safety features for this model year include Attention Assist (drowsiness alerts) and PreSafe (crash anticipation controls).

For 2012 each model received engine upgrades for increased power and efficiency. These included a 302-horsepower, 3.5-liter V6 with direct injection for the E350, and a twin-turbo 4.7-liter V8 for the E550, which put out 402 horsepower and 443 pound-feet of torque. The E550 sedan also came exclusively with a 4Matic AWD.

In 2014 the E-Class received another significant round of updates as the front end styling was again revised to be even sleeker, the E350 diesel option was rebranded as the E250, and the E63 came standard with AWD. Possibly the most significant update to the 2014 models, however, was Mercedes’ new safety package. Front and rear collision-mitigation systems are added as standard, and an updated Driver Assistance package with adaptive cruise control and lane-departure prevention is optional, alongside Mercedes’ Mbrace telematics system with smartphone integration.

In 2015 the E400 hybrid model received a new engine, boosting power output to 329 horsepower before being discontinued in 2016 along with the base E63 model. 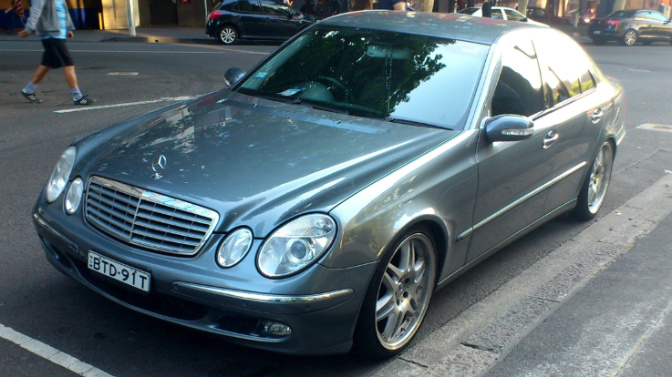 The redesign for the 2003 E-Class was focused on improving performance and technology and found little in the way of stylistic modifications.

All models come standard with five-speed transmissions and rear-wheel-drive, with the E320 wagon having an all-wheel-drive system option. Standard features include keyless entry, two-stage airbags, an improved braking system and ventilation controls, and rain-sensing wipers.

In 2005 Mercedes made the wagon body-style available on all models as well as reintroduced a diesel option to the U.S. as the E320 CDI, which carries a 201-horsepower 3.2-Liter V6 engine.

In 2006 the E320 base model was boosted to the E350, which carries a 268-horsepower 3.5-Liter V6 engine, a significant increase from the previous 221-horsepower versions.

The 2007 model year E-Class brought the lineup a mid-life refresh with a sleek cosmetic revival while engine changes continued to occur. The E500 was replaced by the E550 and added a total of 80 horsepower to the previous version. The E55 AMG was replaced by the E63 AMG, which added 40 horsepower to the previous version. In addition to engine changes, many previously option features become standard, including a sunroof, dual-zone climate control, leather upholstery, a 10-way power driver’s seat with memory settings, and a Harman Kardon surround-sound audio system. 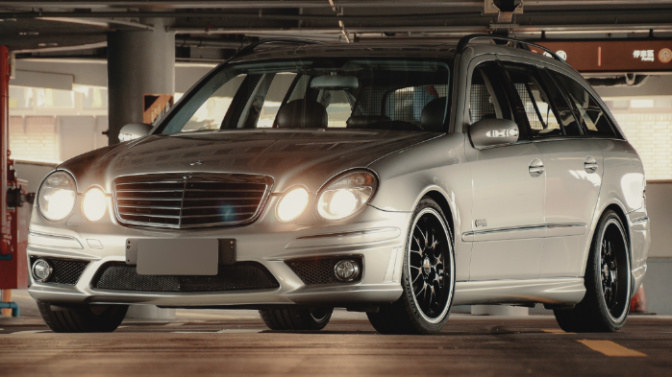 The E-Class line was fully redesigned under its new name for the 1996 model year. The most significant change is found with the body of the vehicle, which is both larger and less boxy than its predecessors. The look is polished off with a split round headlamp design, providing a unique visual personality and becoming a staple for the E-Class aesthetic.

Initial offerings were the E300D and E320 with sedan body styles hosting a 134-horsepower E300 diesel engine or a 217-horsepower 3.2-liter six-cylinder engine, respectively; each of which was paired standard to a four-speed automatic transmission and rear-wheel-drive. Significant technology additions for the 1996 model included automatic climate control and air filtration for the first time, and standard traction control.

In 1997 an E420 model luxury sedan was added to the lineup with a 275-horsepower 4.2-liter V8 engine mated to a new five-speed automatic transmission that became standard on all models that year.

For 1998 new variants were offered, including a wagon and an all-wheel-drive option for the E320 and a turbodiesel E300TD model to replace the previous E300D; that increased power output to 174-horsepower. Mercedes also made the switch from inline-six engines to V6 engines as well.

In 2001 a performance variant was introduced as the AMG-tuned E55, which carried a 349-horsepower 5.5-liter V8 engine catering to the thrill-seeking sedan drivers of the world. 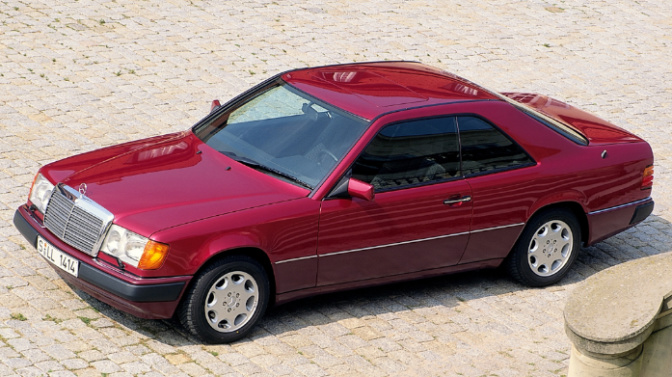 The first E-Class model for 1994 was actually a facelifted version of the W124 Mercedes had built since 1986. This first model was available in the U.S. in three powertrain variants labeled the E320, E420, and E500.

The E320 came in several different body styles: a four-door sedan and wagon body styles, and two-door convertible and coupe body styles while the E420 and E500 were both available exclusively with a sedan body style. All models came standard with four-speed automatic transmissions and rear-wheel-drive.

The modifications made to the 1994-95 models from previous years held two main focuses: automotive aerodynamics and safety. These first E-Class models were not only the fastest standard production sedans of the time; they were also hailed as some of the safest sedans of the day. Standard safety features included ABS braking, steering wheel and side airbags, and a seatbelt tensioning system, all of which were ahead of the market at the time.