Now in its 11th Generation, the Honda Civic has been produced by Japan's Honda since 1972. Since the 2000 model year, the Civic was categorized as a compact car after occupying the subcompact class.

As of 2021, the Honda Civic positions itself between the Honda Fit and Honda Accord in its global car line-up.

Fuel efficiency has always been a key asset of the Civic, as has its fun-to-drive nature, making it an excellent choice for eco-minded shoppers throughout its range of trim levels, body styles, and powertrain offerings.

The eleventh-generation Honda Civic debuted for the 2022 model year. It brought with it significant updates from previous generations, including an extension in size. In comparison, the 2022 Civic is similar to the 2022 Honda Accord in both comfort and styling thanks to this Civic's increased wheelbase, which grew 1.4-inches longer from the previous generation. The new Civic is also wider by 0.5-inches.

The same engines will carry over from the tenth generation. The base LX trim and Sport trim feature a 2.0-liter four-cylinder engine with an output of 158-horsepower and 138 lb-ft of torque.

The EX, EX-L, Touring, and Sport Touring trims feature a turbocharged 1.5-liter four-cylinder engine with an output of 180-horsepower and 177 lb-ft of torque.

A CVT powers the front-wheel drive of most models. However, the hatchback offers a 6-speed manual transmission, which is available at no cost for the Sport and Sport Touring trims.

The Honda Civic Si has a more powerful turbocharged 1.5-liter four-cylinder engine with an output of 200-horsepower and 192 lb-ft of torque. Only a six-speed manual transmission is available for the Civic Si.

All Honda Civics come standard with Honda's suite of active safety features (Honda Sensing). All Civic trim levels include the basics of the Honda Sensing suite, while the EX trims and above add on LaneWatch.

The same engines will carry over from the tenth generation with only one CVT transmission option. The eleventh generation will be available in several trim levels, and body styles, including sedan, hatchback, Si, and Type R. The Civic sedan will enter the automotive market first.

The 2022 Honda Civic competes against the 2022 Toyota Acura ILX but still outshines with its impressive fuel economy. 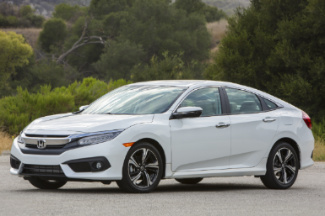 The tenth-generation Honda Civic comes in three body styles: sedan, coupe, and hatchback. The Civic hatchback returned for the first time since 2006. Built on a new global platform, this generation's Civic features a low and wide profile with a sloping roof and a slightly more spacious interior and trunk. The base LX trim is powered by a 2.0-liter four-cylinder engine with 158-horsepower, with a six-speed manual or continuously variable transmission.

All models come with automatic climate control and a rear-view camera. Higher up, the EX-T, EX-L, and Touring trim levels have a 1.5-liter turbocharged four-cylinder with an output of 178-horsepower. The top-of-the-line Touring comes with a leather interior, a 10-speaker sound system, and a Honda Sensing package, including lane-keep assist, adaptive cruise control, and forward collision alert.

A new Sport trim for the sedan and coupe variants was welcomed with a six-speed manual transmission and optional continuously variable transmission, 18-inch alloy wheels, a rear spoiler, and center exhaust. Also, the Civic Type-R hot hatchback came to the U.S. for the first time, offering 306-horsepower from a 2.0-liter turbo-four engine. 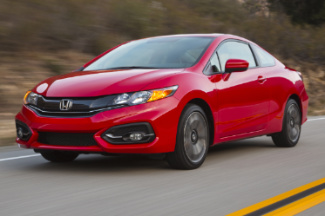 The ninth-generation Civic was unveiled at the 2011 North American International Auto Show in coupe and sedan configurations. This generation's DX, LX, EX, and EX-L trim levels retained the 140-horsepower, 1.8-liter 4-cylinder engine of the previous generation, while the Si model got a larger 2.4-liter engine that produced 201-horsepower.

All models came with electronic stability control, anti-lock brakes, and a new multi-link rear suspension that improved the ride quality and handling on rough roads. Buyers could choose between manual and automatic transmissions and hybrid and natural-gas versions.

The 2012 redesign introduced Honda's Eco Assist technology, which monitored the driver's driving style and displayed its impact on fuel efficiency 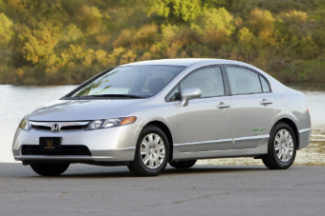 The 2006 redesign introduced a raked windshield that gave the eighth-generation coupe and sedan a sporty, futuristic look. Both the coupe and sedan were available in various trim levels (DX, DX-G, LX, EX, and EX-L).

The Hybrid model was only available as a sedan, and the Civic Si was offered as a coupe and a sedan for the first time.

Inside, the analog instrument panel of the previous generation was replaced with a two-tier digital panel. Under the hood, the DX, LX, and EX models shared a 1.8-liter four-cylinder engine that produced 140-horsepower. All models except the hybrid had five-speed transmissions.

The Civic Hybrid featured a 1.3-liter 4-cylinder engine and an electric motor that made a combined maximum of 110-horsepower, which was 23 percent more power than the previous generation's hybrid. 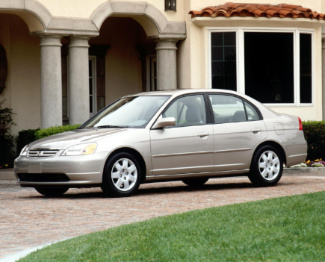 The seventh-generation Civic debuted with sedan and coupe body styles and four trim levels: DX, LX, EX, and HX. The Si model, which was offered as a three-door hatchback, rejoined the line-up for 2002.

Honda also introduced the Civic Hybrid as a sedan powered by a 1.3-liter engine. The DX and LX models received a horsepower increase—from 106-horsepower to 115-horsepower. The EX model maintained the previous generation's 127-horsepower.

A five-speed manual transmission came standard, but a four-speed automatic transmission was optional. A CVT transmission was available on the HX to maximize its fuel economy. Standard safety features included front airbags and an engine-immobilizing theft-deterrent system.

For the seventh-generation Civic, the double-wishbone front suspension switched to MacPherson struts. 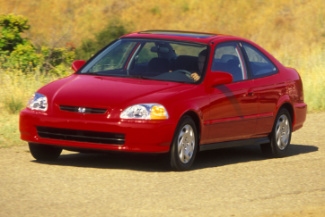 The sixth-generation Civic was available in sedan, coupe, and hatchback configurations. All body styles shared a 103.4-inch wheelbase that offered more interior space. From the standard 1.6-liter four-cylinder engine, the CX, DX, and LX trim levels got 106-horsepower, the HX Civic coupe got 115-horsepower, and the top-tier EX Civic sedan got 127-horsepower.

The EX model boasted keyless entry, cruise control, a power sunroof, and full-wheel covers. Fuel economy still defined the Civic, with the HX model ranking as the mileage leader. The HX could do 39 mpg and 45 mpg with a five-speed transmission in city and highway driving, respectively. Across the other trims, buyers could choose between a five-speed manual and a four-speed automatic transmission. 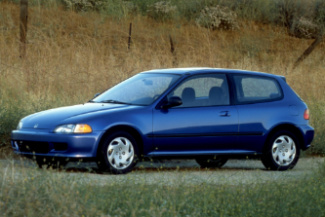 The 1992 redesign saw the Civic drop its boxy look and take on a more aerodynamic design for its fifth generation. The sedan and hatchback were built on a longer wheelbase, which made the new Civic larger than most of its predecessors.

Honda dropped the station wagon but added a two-door coupe model in 1993. Depending on the body style, six trim levels were available: CX, DX, VX, LX, Si, and EX. The base CX trim married a 70-horsepower, 1.5-liter 4-cylinder gas engine with a five-speed manual transmission. The Si and EX models featured a 1.6-liter gas engine that produced 125-horsepower. 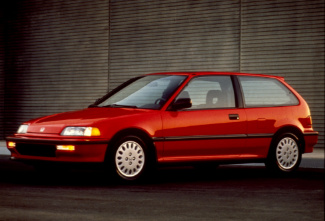 The fourth-generation Honda Civic was completely redesigned. Its wheelbase was increased by 2 to 4 inches to 98.4 inches, and the body got a lower hood line and more glass. Honda kept the distinctive boxy shape of the previous generations.

All U.S. models featured electronic fuel injection. The most significant change for the fourth generation was the addition of the double-wishbone suspensions for the front and back.

In the U.S., the Civic was available as a sedan, hatchback, and station wagon in Standard, DX, LX, EX, and Si trim levels. The base Standard model is powered by a 75-horsepower 1.5-liter engine matched with a four-speed manual transmission.

An automatic four-speed transmission was also available. The sporty Civic Si, which was only available as a hatchback, produced 108-horsepower. Standard features on the Si trim included a large exhaust, air conditioning, and fog lights. 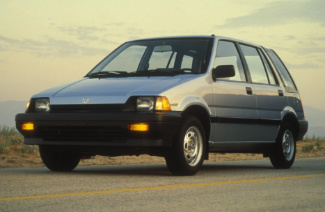 The third-generation Honda Civic was available as a three-door hatchback, four-door sedan, five-door station wagon, and a sporty coupe. The new two-seat coupe was labeled the CRX. Honda built all their Civic models on a larger platform that increased the previous generation's wheelbase by 2 to 5 inches to 93.7 inches.

The third generation welcomed the long-running four-cylinder D series engine and a new 1.5-liter CVCC engine with 76-horsepower. The base hatchback CRX model ran on a 1.3-liter 8-valve engine that produced 60 horsepower. The 1984 model year also introduced the high-performance Honda Civic Si model, which was offered in the U.S. as a 3-door Civic Si hatchback and the CRX Si variant. This new high-performance model produced 91-horsepower.

All Civic powertrains used the CVCC design, adding a third valve per cylinder to the engine.

Buyers could choose between two engine options: a base 1.3-liter engine that produced 55 horsepower and a more powerful 1.5-liter engine with 67 horsepower.

The top-of-the-line Civic 1500 GL added radial tires, a tachometer, and body side moldings to this package. 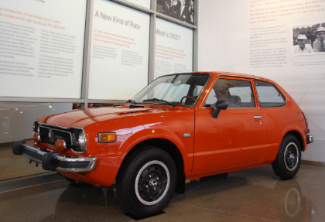 The first-generation Honda Civic was introduced in 1972 in Japan, but this small car sold as a 1973 model. As a result of the 1973 oil crisis and the new 1975 EPA emissions standards, Americans welcomed the fuel-efficient sub-compact Honda Civic over muscle cars of that time.

It was available as a two-door sedan, three-door hatchback, and a five-door station wagon. Standard features included a dashboard with wood-grain accents, reclining bucket seats, and 12-inch wheels. The hatchback boasted a fold-down rear seat, cloth upholstery, and an AM radio.

Honda fitted the first models with a 1.2-liter four-cylinder engine, which produced about 50-horsepower.