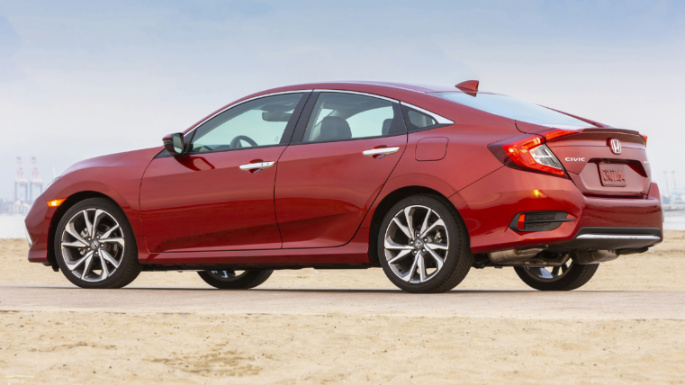 As many automakers move to abandon their passenger car lines in favor of larger SUVs, Honda has stuck to its guns with the Civic and larger Accord, both of which have been part of the company's product lineup for decades. The 2020 Civic hits dealer's lots mostly unchanged from the year before, but the hatchback model was updated with new tech, new appearance touches, and a quieter cabin.

The Civic is aimed at new car buyers that want a compact car with a sportier driving experience and a high level of value. Its competition includes the Toyota Corolla, Hyundai Elantra, and Nissan Sentra. 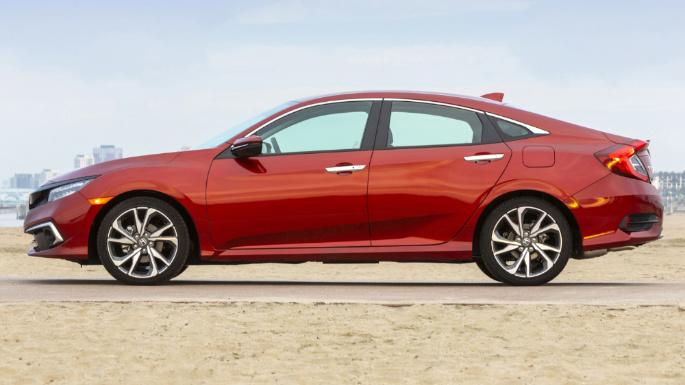 TLDR: The 2020 Honda Civic is fun to drive, is very user-friendly, and packs plenty of value

Fun: No matter the trim, engine, or body style, the Civic is just plain fun. When equipped with a manual transmission, the Civic is legitimately enjoyable and brings many of the same engaging driving experiences that are expected from vehicles costing two or three times as much. The Si and Type R are quick and agile, but even the lower LX and Sport trims have an entertaining and fun ride that proves more power doesn't always make a better car.

Usable: The Civic's roots as a budget car that lasts forever weren't lost on the 2020 model, but it's buried beneath a useful interior with plenty of storage and an attractive exterior. Inside, there is generous small-item storage, enough head and legroom to keep almost anyone comfortable, and a trunk that is large enough to accommodate the whole family's gear. The Civic is comfortable overall, but the Si and Type R models' front seat designs may be too confining for taller or larger passengers. 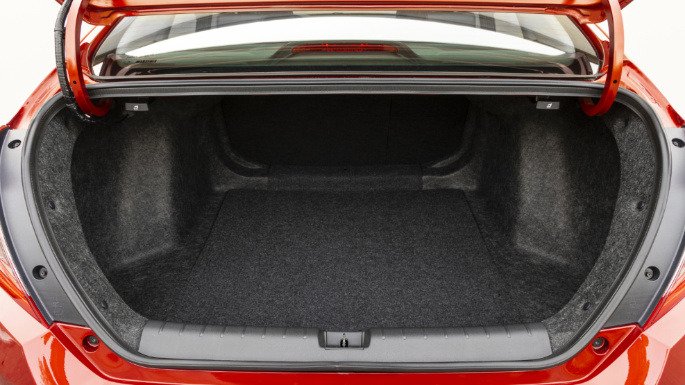 Value: In the middle of the Civic lineup, the Sport and EX trims come with several popular tech features like Apple CarPlay and Android Auto while holding the overall price tag below $25,000. The high-performance Si and Type R models are more expensive, but the level of power and refinement rivals cars costing many times more.

TLDR: The Civic's styling may be too busy for some, there's a strange mix of options, and the ride leaves plenty of room for improvement.

Styling: Many people mocked the Civic Type R when it was released, because of its sky-high wing and over-the-top vents and scoops. That hype has mostly passed, but whole Civic lineup shares styling that can seem busy by some, becoming more so as you move moving up through the trim levels. The Civic's interior does not match up with the car's exterior, but there's a lot to take in from almost every angle.

Options Mix: Honda has traditionally had a simple model lineup and no factory options. Still, the proliferation of model levels with all of the different engine or transmission choices makes the Civic's 2020 range confusing at first. Yet, some models have recently been simplified, and the company last year made its Honda Sensing suite of driver assistance technologies standard across the board. 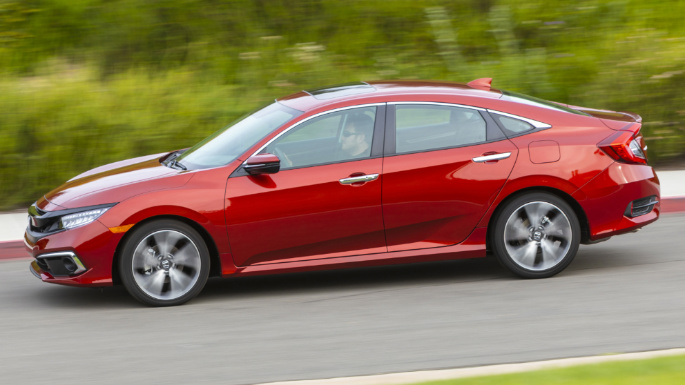 Busy Ride: The Civic's ride is busy and does little to cope with the rough road surfaces. Sportier variants like the Si or Type R feel jittery. They can be quite loud over all but a perfect stretch of pavement, and even the lower trims with smaller wheels and more comfortable suspension tuning struggle with less-than-perfect road surfaces. 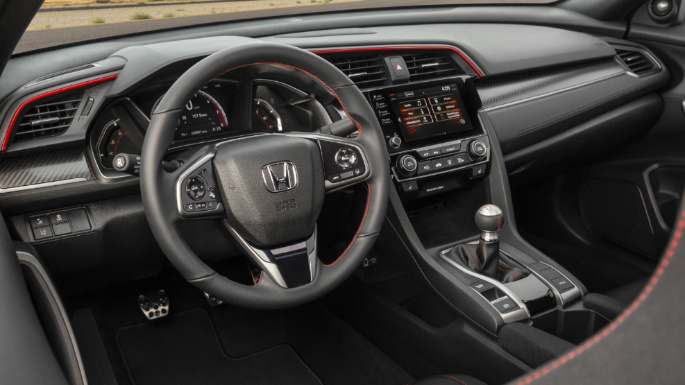 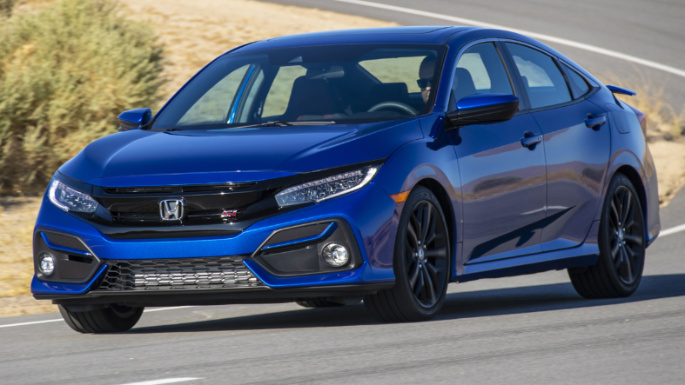 What's it gonna cost me?

The base Civic LX has a starting price of $21,605 after a $995 destination charge. It comes with a 2.0-liter engine and six-speed manual, LED daytime running lights, a multi-angle rearview camera, power windows and door locks, cruise control, cloth upholstery, a five-inch LCD screen, Bluetooth and a USB port. It also includes the Honda Sensing group of driver assistance technologies.

The Civic Sport has a starting price of $22,505. It comes with a center-exit exhaust system, fog lights, keyless entry, a decklid spoiler, a leather-wrapped steering wheel and shift knob, folding rear seats, a seven-inch infotainment screen with Apple CarPlay and Android Auto capabilities and a 180-watt sound system. 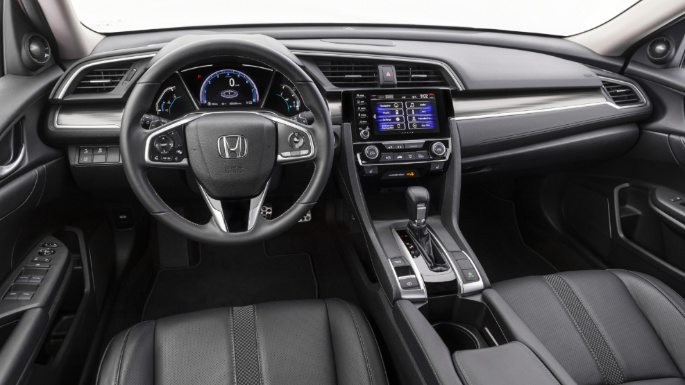 The EX-L trim comes with leather upholstery and has a starting MSRP of $25,955.

The Civic Si has a starting price of $26,155 after destination and comes with a 1.5-liter turbocharged engine, a 6-speed manual transmission, 18-inch matte black alloy wheels, a lap timer, a G-force gauge, a rev-limit indicator, a sport mode indicator and a turbo boost meter. 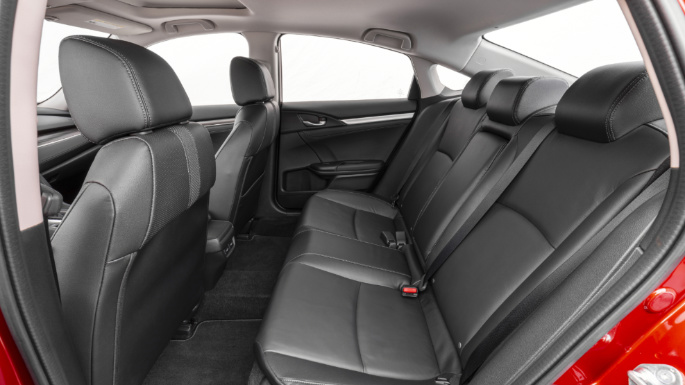 The Civic Type R has a starting price of $37,950 and comes with a 306-hp 2.0-liter turbocharged four-cylinder engine, a six-speed manual transmission, a limited-slip differential, a lightweight single-mass flywheel and adaptive dampers.

Our money would buy the Civic Si Sedan, which has all of the usable space and utility that the standard cars have but also has a more powerful engine and an excellent manual transmission. That's all without an outrageous price tag. If the lack of an automatic transmission is an issue, consider the EX as well. 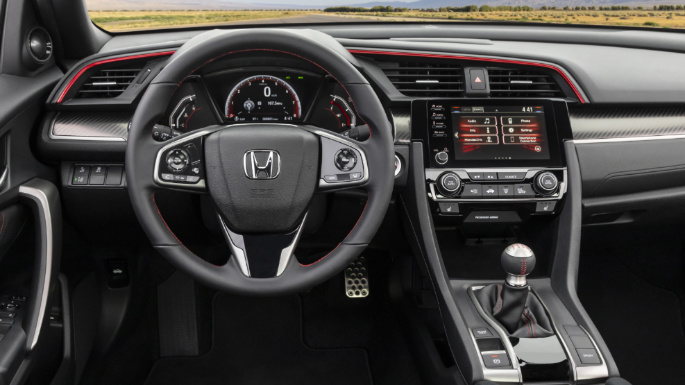 The Toyota Corolla is the Civic's most prominent rival in terms of sales numbers. It was redesigned for 2019 and now offers a hatchback model. The Corolla doesn't match the Civic on driving experience or value, though. The Hyundai Elantra packs much of the same tech and comfort features that are more elaborate than the Civic's but lacks the engaging driving experience that Honda offers.

The Nissan Sentra is redesigned for 2020 and has the most standard tech and safety features than any other car on our list. It's also the least expensive, with an all-in price of under $22,000. The Mazda3 is one of the most refined and upscale cars in its segment and has one of the best driving experiences as well.