Powertrain: The base SE model comes standard with a 2.0-liter four-cylinder engine with 147 horsepower and 132 lb-ft of torque. It features a 6-speed manual or 6-speed automatic transmission with manual shifting mode and front-wheel drive. All Elantra engines run on an Atkinson cycle engine instead of an Otto cycle. The same engine is shared with the Elantra Limited model.

Other available engines include:

The Elantra Eco is powered by a 1.4-liter four-cylinder turbo engine with 128 horsepower and 156 lb-ft of torque and exclusively features a seven-speed twin-clutch automatic transmission.

The Elantra GT has a 2.0-liter four-cylinder engine with 173 horsepower and 154 lb-ft of torque that powers the front-wheel-drive through a six-speed manual or automatic transmission.

The Elantra Sport has a 1.6-liter turbo-four engine that outputs 200 horsepower and 190 lb-ft of torque. It has either a 6-speed manual or a seven-speed twin-clutch automatic transmission. 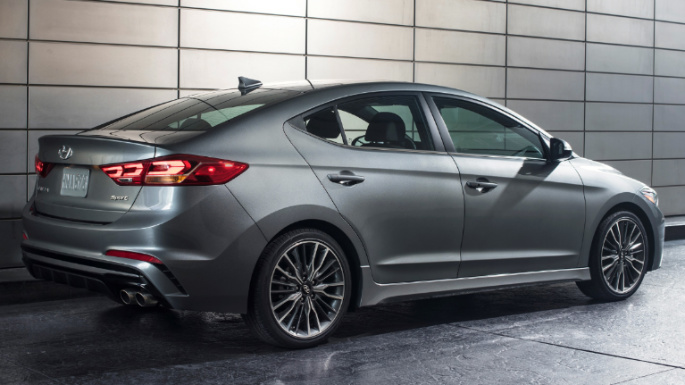 The 2017 Hyundai Elantra is a five-passenger compact car available as a sedan or a hatchback and ranks in the top half of the competitive compact car class. Suppose you are shopping for a used sedan or hatchback. In that case, the Elantra rates well for predicted reliability and offers excellent safety features and high ratings from the Insurance Institute for Highway Safety.

Ten years ago, the Hyundai Elantra was not a top-ranked competitor in its compact class. However, an overall redesign in 2011 changed that for the Elantra, quickly becoming one of the top-rated economy sedans, and placing it in the same competitive league with cars like the Honda Civic, Ford Focus, Mazda 3, and Toyota Corolla.

The 2015 Elantra overturned the compact-sedan class with its improved fluid styling and upscale features and was the brand's bestselling model in 2015. But there were some significant weaknesses which the sixth-generation Elantra had constructively identified. The 2017 model was an all-new car and featured new powertrains and a long list of active safety technologies and new multimedia compared to previous versions.

The 2017 Elantra was fully redesigned with a classier exterior look and a more refined interior feel. It slots neatly below the mid-size Sonata and just above the subcompact Accent. The front-wheel-drive compact sedan featured the Elantra Sport for this time in 2017, which competed with the Honda Civic Si and the Volkswagen Jetta GLI. The new trim's unique features included a performance-orientated suspension that swapped out the base SE's torsion beam rear suspension in favor of the independent multilink setup.

What else did 2017 bring to the Elantra that was different from previous versions? To start with, the Elantra stepped away from the extravagant curves of the fifth-generation car and followed closely behind the design of the Sonata with dialed down lines to make it simpler.

Reconfiguration of the rear twist-beam suspension was a feature in the sixth-generation Elantra, which has a longer and more vertical shock absorber for improved impact damping.

2017 also introduced a host of tech features that previous versions were lacking. Standard features across all the trims include a USB port, satellite radio, six-speaker audio system, and a user-friendly touchscreen infotainment system.

The 2017 Honda Civic is a strong rival for the 2017 Elantra, and many reviews feel that the Honda is a cut above the Hyundai. Both compact cars are fuel-efficient and feature high safety ratings, but the Honda has more body styles, including a coupe which the Elantra does not feature in this range. The Elantra is excellent to drive, but it is a firmer ride compared to the Civic, and many reviewers have described it as missing the "fun factor."

All hope is not lost against the 2017 Honda Civic. The 2017 Elantra has a higher predictability rating of 4.5 out of five, which is higher than the Civic's 3.5 ratings. The Elantra also has a more substantial standard warranty in place for more years and higher mileage than the Civic.

Another rival with a similar appeal as the Elantra is the 2017 Toyota Corolla. They are very well-matched in seating space, safety ratings, fuel efficiency, and predicted reliability, but each has its trade-offs that set them apart slightly. The Elantra is much nicer inside and offers tech features that the Corolla is missing, including Apple CarPlay and the Android Auto system. The Corolla does, however, come standard with a massive suite of safety features, such as forward collision warning and brake assist, that are not standard across all the Elantra models. 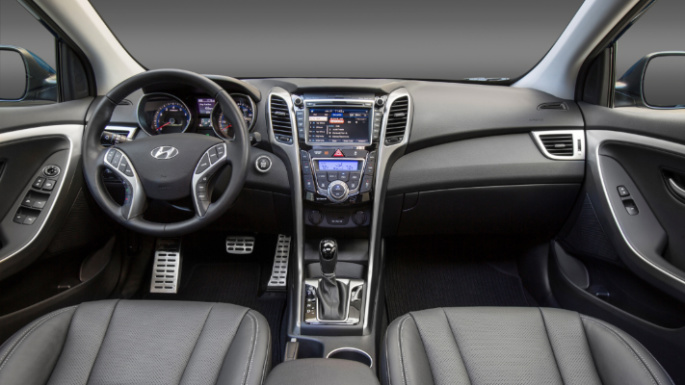 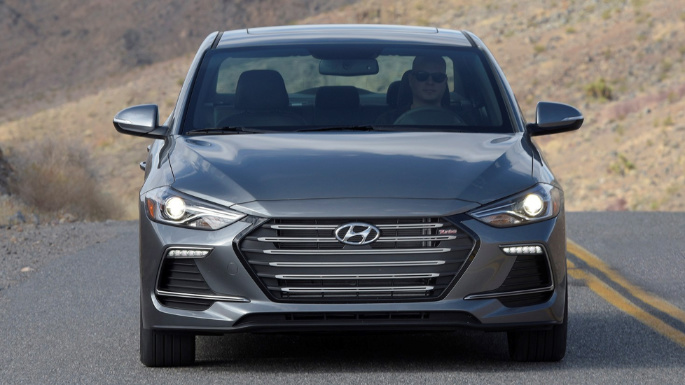 The 2017 Elantra is an excellent value for the money and competes well with other popular brands in the market, including the 2017 Honda Civic. The Honda does offer better performance, but the Elantra still delivers excellent predicted reliability and safety.

For the average price of a used compact car, you get a lot of warranty, boosting the overall value for longer. The Hyundai warranty is one of the strongest in the market, covering pre-owned vehicles under five years old or fewer than 60,000 miles.

The base SE model is short on many technological upgrades and active safety features, but it still competes against rivals like the Mazda 3. 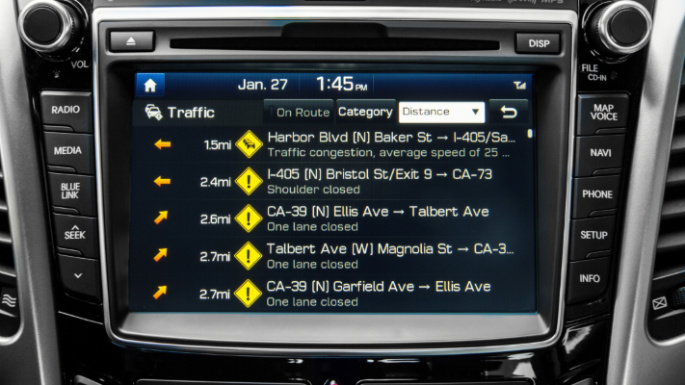 More tech features were introduced in 2017 that was comparatively better than previous versions, and the price remained stable.

Despite the upgrades to the technology, many of these features are not standard across all the trims. The SE base model comes standard with a USB port, six-speaker system, and satellite radio, but to enjoy some of the upgrades will have you paying extra or purchasing a higher trim model. It includes the Hyundai Blue Link Telematics system.

The audio and climate controls are easy to use, and the touchscreen infotainment system is responsive. 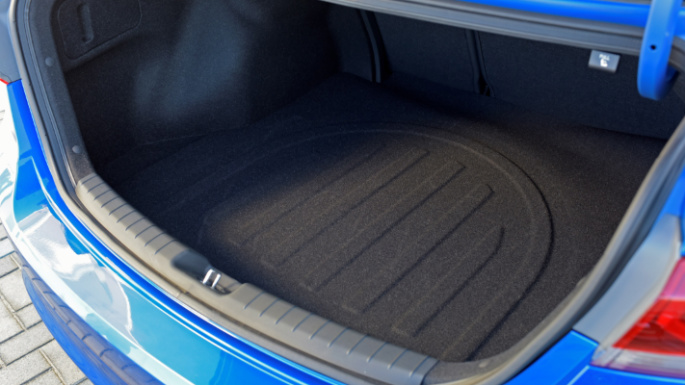 With 14.4 cubic feet of trunk space available, the 2017 Elantra is above-average for its class and overtakes the likes of the 2017 Toyota Corolla that has 13 cubic feet and the 2017 Ford Focus with 13.2 cubic feet.

Available as either a four-door sedan or a five-door hatchback, it can seat five passengers comfortably. The front seats provide reasonable support and plenty of head-and legroom. The back seats sit slightly higher in this model, but there is still a lot of room.

The controls are well-placed, which makes entering and exiting the car easy.

There is about an inch more in overall width and length, improving the model's already generous interior space. 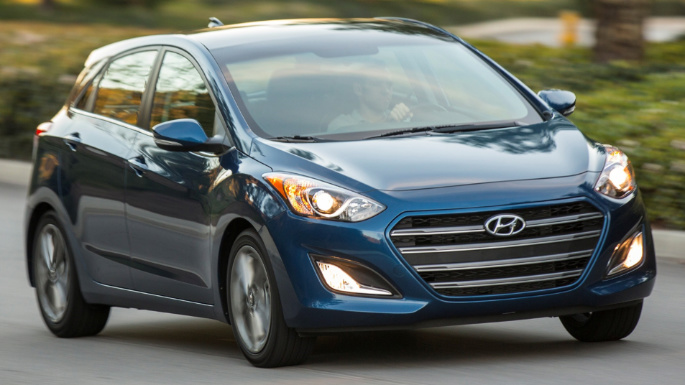 A less flashy exterior design was a major change for the sixth-generation Elantra model. There is less sculpting down the car's sides, and the draped rear roofline was defined and capped by LED taillights—the roofline blends in the same conventional way as the Chrysler 200 and Ford Fusion.

The C-shaped lines that once pulled the rear of the car to the front disappeared and were replaced by vertical door cuts.

A broader, deeper grille on the 2017 model gives it a dominating presence and stylish body shape.

The Boomerang-shaped LED running lights to help brighten the front of the car. 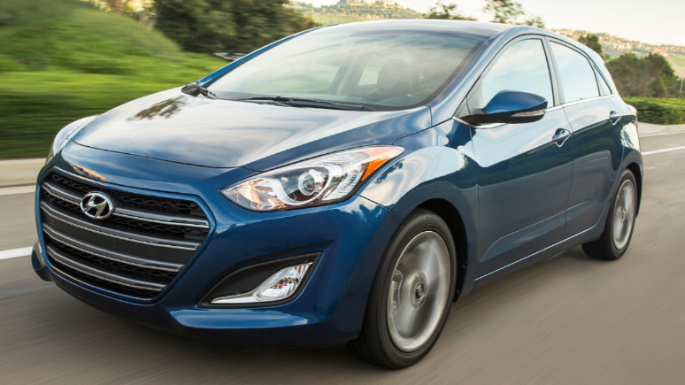 2017 introduced improvements to the Elantra's overall performance and ride quality with better curb weight, responsive controls, and steering that allow the car to hustle when it needs to. The upgraded suspension helps hold the car well on rough roads.

The Mazda 3 competitively provides a better driving experience because the ride quality in the Elantra is a little too firm, and it is jittery over rough pavement. However, discomfort is still not created with the taut ride; large bumps' impact is minimal.

The seven-speed dual-clutch automatic transmission is a little clunky and sometimes slow to transition, and the standard 2.0--liter engine has some of the slowest mph times in its class. 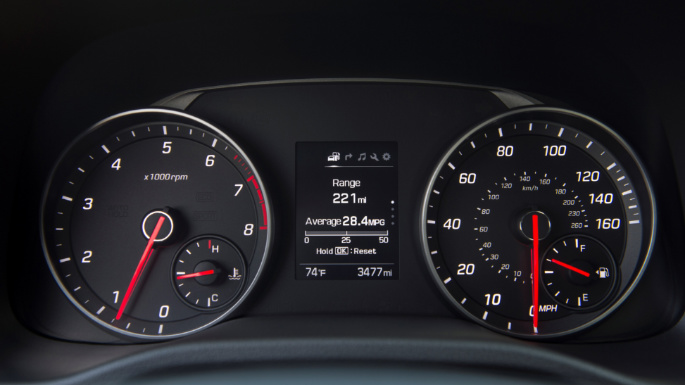 Reviews have described the fuel economy as being an industry leader in its class. The 2017 Honda Civic does get a couple more miles per gallon.

The Elantra Eco is one of the most substantial fuel consumption models and has an excellent EPA of 32 mpg in the city and 40 mpg on the highway.

The base SE and Limited models earn an EPA of approximately 29/38 mpg city/highway, especially when paired with the six-speed automatic transmission.

The Sport and GT models are not fuel-efficient and offer an EPA of 26/33 mpg and 24/32 mpg city/highway. 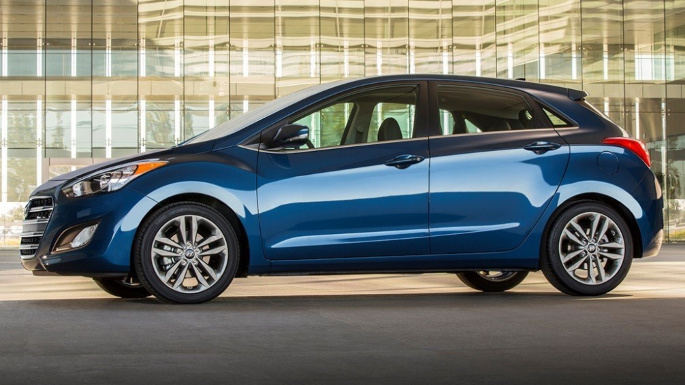 The base Elantra sedan (the SE) starts at an MSRP of $17,150 with a standard 2.0-liter, four-cylinder engine that outputs 147 horsepower and 132 lb-ft of torque. It features a 6-speed manual or 6-speed automatic transmission with manual shifting mode and front-wheel drive. The base model comes standard with remote keyless entry, a USB port, satellite radio, 15-inch steel wheels, air-conditioning, cloth upholstery, a tilt-and-telescoping steering wheel, full power accessories, a 60/40 split-folding rear seatback, CD player, and a six-speaker audio system.

The automatic-transmission SE models offer a Popular Equipment package that adds on some desirable features. Pricing for this package starts at $800. It includes 16-inch alloy wheels, automatic headlights, heated side mirrors, cruise control, a rearview camera, Bluetooth connectivity, a 7-inch touchscreen, and smartphone integration with Apple CarPlay and Android Auto.

The Elantra SE Value Edition four-door sedan starts at $20,250 and has similar features to the SE, but it adds a power sunroof.

The Elantra Eco starts at an MSRP of $20,650 and has a turbocharged 1.4-liter four-cylinder engine with 128 horsepower and 156 lb-ft of torque. This model exclusively features a seven-speed twin-clutch automatic transmission and retains its four-wheel drive. It comes with all the same standard features as the SE base model and includes 15-inch alloy wheels.

The Elantra Limited model starts at an MSRP of $22,350 and shares the same engine as the base SE. It includes all the same features as the SE model as well as 17-inch alloy wheels, adaptive xenon headlights, additional chrome body trim, LED taillights, a power-adjustable driver's seat (with power lumbar adjustment), leather upholstery, Hyundai's Blue Link system, and an additional charge-only USB port.

There are two packages available for Limited models; the Limited Tech package and the Limited Ultimate package.

The Elantra Sport starts at an MSRP of $21,650 and is equipped with a turbocharged 1.6-liter four-cylinder engine that delivers 201 horsepower and 195 lb-ft of torque. It comes standard with a six-speed manual transmission, but there is an optional seven-speed dual-clutch automatic transmission. It comes with the same features as the Limited Edition, plus 18-inch wheels, bigger brakes, sport-tuned suspension and steering, unique front and rear fascias, alloy pedals, and xenon headlights.

The 2017 Elantra GT starts at an MSRP of $18,800 and is the only hatchback model in this series. It shares all the same features as the SE model, but since it is a sporty trim, it has a more powerful 4-cylinder engine that outputs 173 horsepower and 154 lb-ft of torque.

If we wanted to purchase a Hyundai and steered away from buying a new Elantra, then we would opt for a used 2017 Hyundai Elantra Eco model. Similarly priced to the base SE, the improved fuel efficiency is a bonus and will save some dollars in the long run, not to mention a slightly more powerful engine.