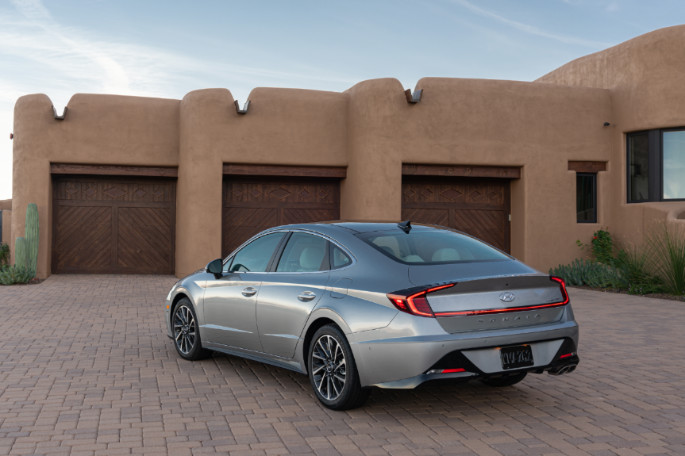 The Sonata is a midsize sedan from Hyundai. It’s a competitor in the shrinking segment of family sedans that includes the Honda Accord, Toyota Camry, Nissan Altima, Volkswagen Passat, Kia Optima, Mazda6, and the soon-to-be-discontinued Ford Fusion and Chevrolet Malibu.

Within Hyundai’s lineup, the Sonata is larger than the compact Elantra, and the subcompact Accent, the compact Veloster, and the trio of Ioniq hatchbacks (EV, plug-in hybrid, and hybrid).

This 2020 model is an all-new generation that’s been redesigned from the ground up. It’s 1.2 inches lower than the outgoing model, plus 1.8-inches longer overall, one inch wider, and it now has a wheelbase that’s been stretched 1.4-inches.

There are currently two powertrains available across four trim levels.

The base SE and mid-level SEL trims come with a naturally-aspirated 2.5-liter, four-cylinder engine that makes 191 horsepower and 181 pound-feet of torque. It’s paired with an eight-speed automatic transmission.

The rest of the lineup in the Sonata family consists of the SEL Plus and the Limited. These versions come with a 1.6-liter turbocharged four-cylinder engine that makes 180 horsepower and 195 pound-feet of torque. It’s also front-wheel-drive only and also comes with an eight-speed automatic transmission.

Late next year (2020), Hyundai will introduce the Sonata N-Line. This performance-oriented model will serve as a more powerful answer to higher-output turbo engines and V6 variants of rivals like the Accord, Camry, and Altima. It will have a 2.5-liter, turbocharged four-cylinder engine and an eight-speed dual-clutch transmission with paddle shifters.

This N-Line model will have about 290 horsepower and 310 pound-feet of torque, plus a variety of upgrades including a retuned and lowered suspension, larger brakes, and various cosmetic upgrades to the interior and exterior. 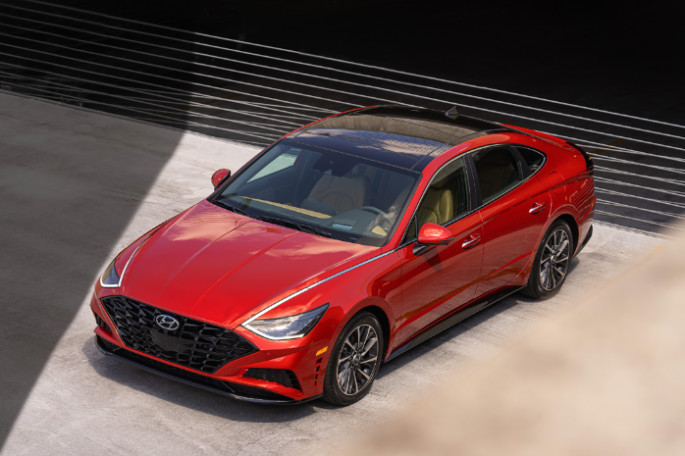 A Sonata Hybrid is expected to go on sale in 2020 and should pack a solar roof that will generate an additional 800 miles of power each year, provided it gets six hours of sunlight a day.

Stand-out styling: One look at the Sonata and it’s clear Hyundai isn’t ready to call it quits on the midsize sedan segment, despite the growing popularity of crossovers and SUVs. This is a car that stands out in a crowd for all the right reasons. Its styling is unique but disciplined, it’s not trying too hard to be flashing or different.

It also looks more expensive than it is, a key feature of the stylish Sonata that vaulted Hyundai into mainstream consideration back in 2010. One particularly neat trick: the LED daytime lights are hidden beneath a strip of chrome trim; when the lights are on, they look like lights but when they're off, the piece seamlessly blends into the chrome.

Space everywhere: It’s in the trunk, it’s in the rear seats, it’s in the front seats. Everywhere you look, Hyundai has packed the Sonata with heaps of space. Tall people can sit in the back with plenty of leg and head room, even if they’re sitting behind someone equally lengthy. Despite its sleek exterior proportions, Hyundai worked hard to make the inside of this Sonata spacious. 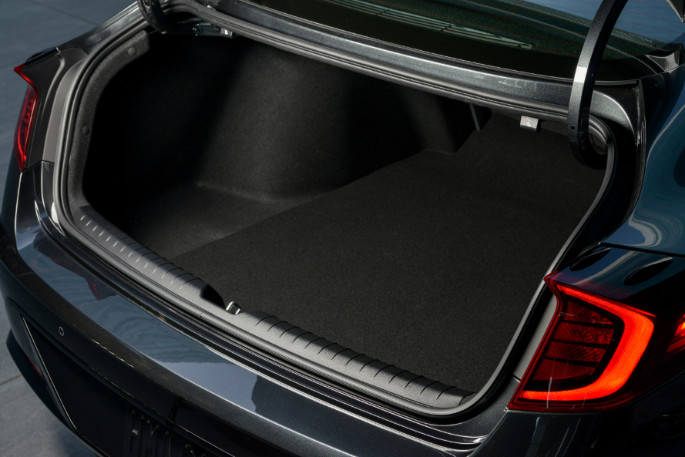 Strong value: Whether you choose the base SE or a loaded Limited, the Sonata offers a strong value. Each trim is competitively equipped with plenty of standard tech, safety, and styling goodies. Even better? The base SE model doesn’t actually look like it’s the cheapest choice. We like that.

Road noise: We spent half our testing in an SEL Plus model and found a little too much road noise kicked up by the tires themselves. The rest of the Sonata’s ride experience was perfectly quiet and pleasant, but the tires on this particular trim were just a little too loud. It’s certainly not a dealbreaker for the Sonata but make sure you take it on your local highway when you test drive to make sure the sound levels meet your expectations.

Down on power: In our testing of the SEL Plus and the Limited models (no base engine cars were available), we found the 180-horsepower turbo four to be reasonably good in most situations but also a smidge underpowered. Its output pales in comparison to the optional engines on a variety of the Sonata’s competitors (like the Camry with its optional V6 or the Accord with its optional 2.0-liter turbo engine), forthcoming Sonata N-Line notwithstanding.

Firm ride: This is a minor quibble but something to pay attention to if you’re test driving the new Sonata. The SEL Plus model we tested had a firm ride; depending on your preference for firmness it might even register as TOO firm, especially as you drive over potholes and bumps in the road. This (again, minor) issue didn’t seem as pervasive on Limited model we also tested. 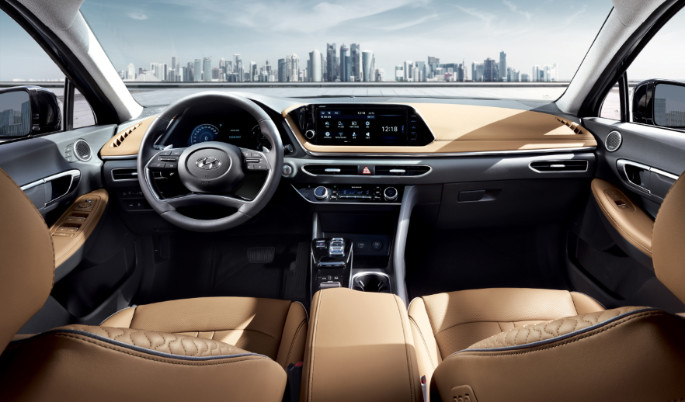 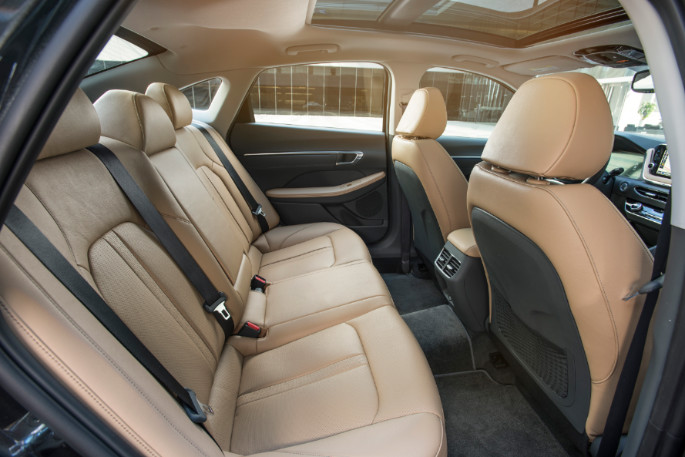 Finally, the range-topping Limited model starts at $34,230 and comes with the same 1.6-liter turbo engine as the SEL Plus, and adds features like a remote parking feature (for tight spaces, allowing driver to stand outside the car and park it), a 10.25-inch touchscreen infotainment system, color heads-up display, blind-spot monitoring that uses side-view cameras to project a view of the side of the car and lane next to you on the digital instrument panel, a 360-degree parking camera, leather seats, power passenger seat, ventilated front seats, 12-speaker Bose audio system, and heated steering wheel. 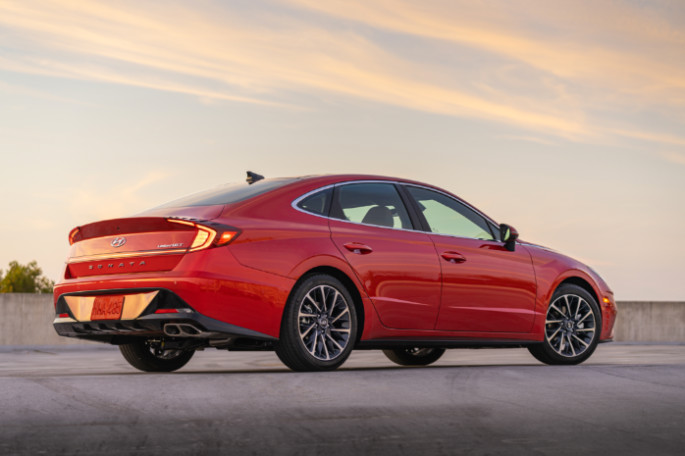 If it were our money, we’d likely opt for the SEL. It’s right in the sweet spot of what you need and what you want and there are a trio of option packages you can add to it for a better customization if there are specific features you’re looking to add.

This is a ruthlessly competitive segment with some nameplates that are among the best-known (and best-selling) in the industry. While this new Sonata moves to the top of this segment, here’s a look at the other models we would consider.

Honda’s Accord is the most well-rounded model in the segment and while it lacks the Sonata’s style, it makes up for it with near-luxury execution and a more engaging driving experience.

Mazda’s 6 is probably the best-looking and the best-driving model in the group so it should definitely be on your shopping list.

Toyota’s Camry is nice and also very well-rounded but we like the execution of the Honda more.

Kia’s Optima is the close cousin of the Sonata but the Optima that’s available currently is based on the older generation of Sonata. As such, it’s getting a little long in the tooth.

VW’s Passat is big and packs impressive levels of European refinement. But it’s boring to drive and look at.

Ford’s Fusion and Chevy’s Malibu are both set to be discontinued in the near future and while the current generations are each getting old, they’ve aged well and might offer a good value.

Nissan’s Altima is also new for 2019 and while we certainly liked it -- particularly the exterior styling and the availability of all-wheel-drive -- we were generally underwhelmed by its overall execution.