Powertrain: The Sorento L and LX trims feature a standard 2.4-liter, four-cylinder engine with 185-horsepower output and 178 pound-foot of torque. If you want a little more power, the below engines are also available:

The EX trim comes standard with a 2.0-liter turbocharged inline 4-cylinder engine that provides 240-horsepower and 260 pound-foot of torque. Stepping up to the EX V6 engine will provide 290-horsepower.

All 2017 Kia Sorento's come standard with a 6-speed automatic transmission. Each trim level comes with either all-wheel-drive or front-wheel drive with a locking differential that splits the drive 50/50 with front/rear. 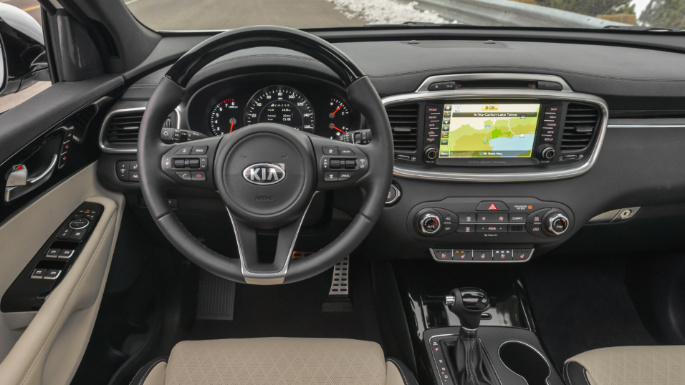 The National Highway Traffic Administration awarded the 2017 Sorento an overall rating of five out of five stars. It also received five stars in the side and front crash tests and four stars in the rollover test.

Across all Sorento models, standard safety features include front seat-mounted side airbags, side curtain airbags with rollover sensor, and electronic stability control.

From the Sorento LX and above, safety features include a rearview camera, while the SXLs boast a surround-view camera system.

The full suite of active safety features are optional for the LX model and includes adaptive cruise control, automatic emergency braking, and lane departure warning. Blind-spot monitoring and rear-cross traffic alert are optional on the EX and LX trim and standard for the EX V6, SX V6, and SXL models. 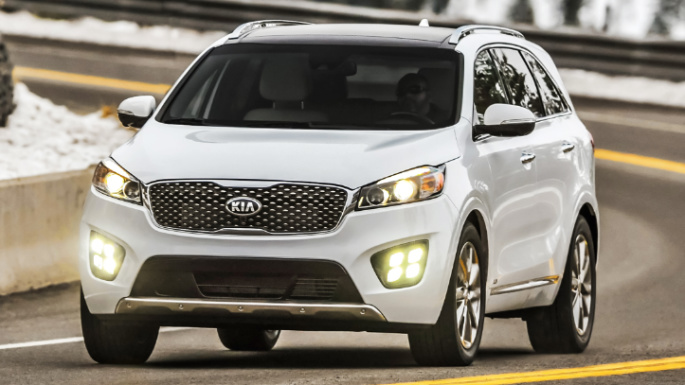 The base L model starts at an MSRP of $25,600 and may feel like a bare offering to you, especially with limited standard features. However, comparatively, the base L Sorento offers a nicer interior and higher predicted reliability rating compared to the Hyundai Santa Fe, and it is projected to cost less to operate over five years compared to the Honda Pilot.

Kia offers an excellent pre-owned warranty coverage that may also provide you with roadside assistance and competes very well against its rivals. 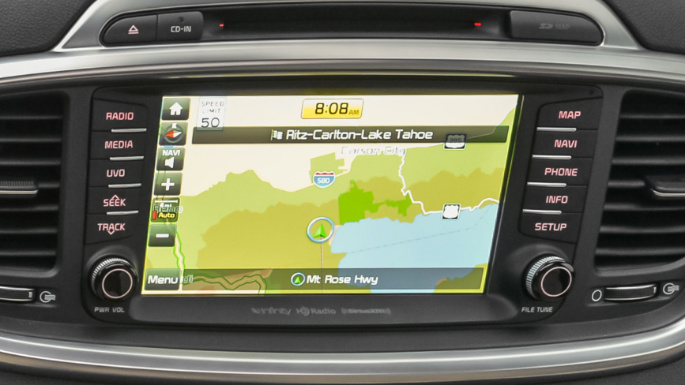 The LX trim adds to the base L with a 4.3-inch touchscreen audio system that displays a clear rearview camera, USB 2.1 ports, and automatic lights. Optional packages will add on a 7.0-inch touchscreen and UVO infotainment, as well as adaptive cruise control.

The SX is the sporty trim that adds on an 8-0-inch touchscreen with a navigation system.

The SXL is the top-of-the-line trim that features standard collision avoidance technology and adaptive cruise control.

Separate rear air-conditioning controls are an exclusive feature for all V6 trim models. 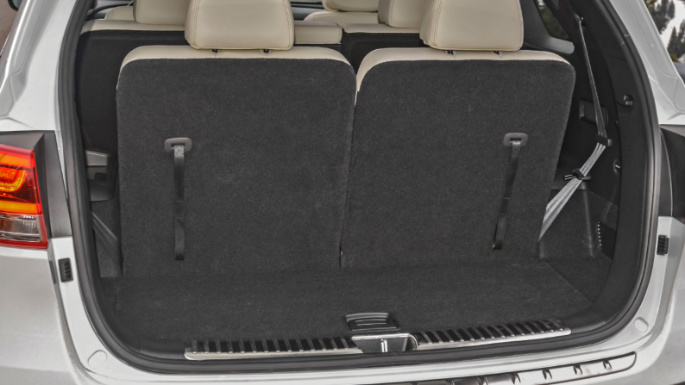 The 2017 Sorento offers a third-row seat to increase passenger seating from five to seven. The base L model seats five and offers the third-row seat as an optional feature.

The second-row has a decent amount of legroom with seats that slide and recline easily. The third-row is very tight on space; however, the Sorento's third-row seating does offer more headroom and legroom than the Hyundai Sante Fe.

The length and wheelbase are roughly 3-inches longer than previous versions and offer more space than the Toyota RAV4 and Honda CR-V.

If you need lots of cargo space, the Sorento will be an excellent choice for you. It has more cargo space than the Kia Sportage and Honda Pilot. There are 38.8 cubic feet behind the second-row seats and 73 cubic feet when all the seats are folded down. 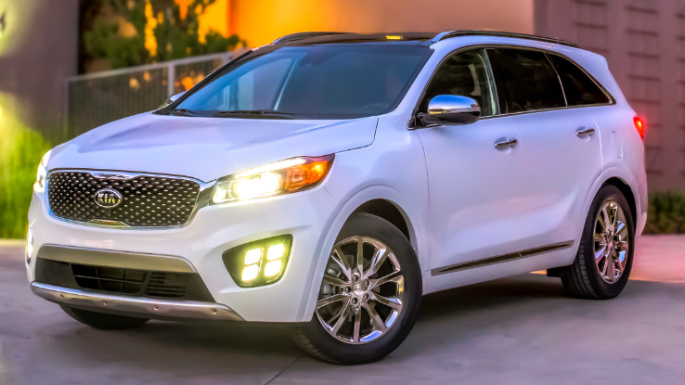 The 2017 model year saw Kia doing some research as it studied its key rivals and borrowed some styling cues.

The exterior redesign offers sides that are very similar to its rivals. Yet, some character was added with the prominent Kia grille and upscaled styling in the front and back. The 2017 Sorento has narrowed the headlight array compared to previous year models and made the lower intake and fog-light pockets more attractive.

The cabin has seen a full redesign with soft trims all around, and climate and navigation/audio controls cordoned off into neat control pods for easier access.

Functionality was focused on with a "horizontal plane" logic applied to the dash wraps. The dash itself is slightly lower, and the critical controls have were placed higher. 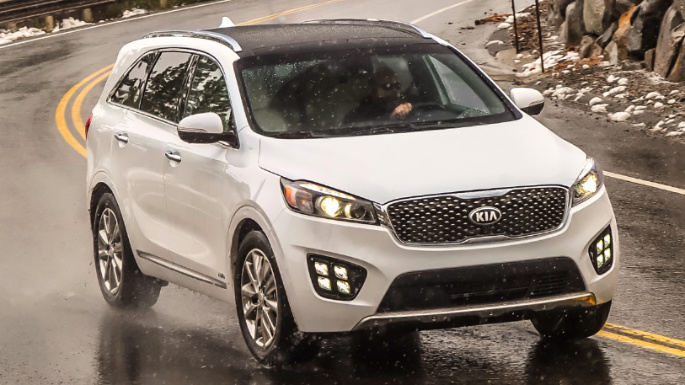 Reviews have detailed the driving experience to be better coordinated compared to previous year models; this could be due to the impressive turbo-4 models that offer responsive steering control and a stiffer structure.

In general, the 2017 Sorento offers good steering feedback and great overall drive-quality. The SX saw an upgrade to its steering mechanism for 2017, which gives you a sportier trim.

The noise control is excellent, with the exterior noise well-suppressed and seven decibels quieter than the 2017 Audi Q7.

The base L engine is somewhat underwhelming, and you may feel disappointed with the overall performance, but opting for the V6 engines keep the Sorento up to speed nicely.

Off-roading is possible, but the Sorento has not been manufactured for this purpose. The AWD system helps during bad weather since it works well with the stability-system-based torque-vectoring function. A differential mode will also help during some challenging terrain. 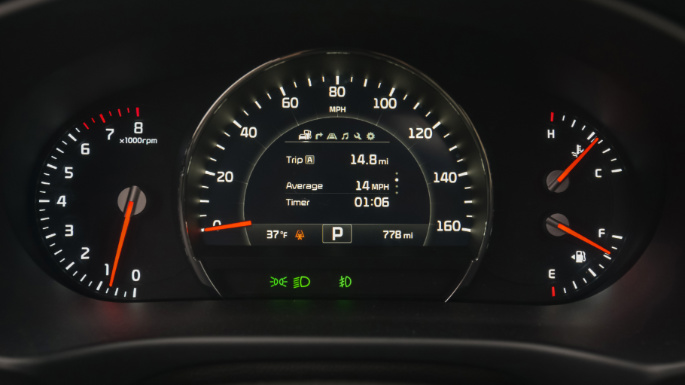 Unfortunately, there is no hybrid system available for the 2017 Kia Sorento or special fuel-saving techniques that will help you curb the costs of frequent filling. However, Sorento's direct-injection engines' lineup is fairly fuel-efficient and keeps it in line with other midsize SUVs.

The most fuel-efficient Sorento from the 2017 lineup is the FWD 4-cylinder engine that gets an EPA rating of 21/28/24 city/highway/combined. FWD Honda CR-V models step up with a better fuel economy at 28/34/30 mpg.

The least fuel-efficient model is the V6 AWD engine that gets an EPA rating of 17/23/19 mpg city/highway/combined.

The turbo-4-cylinder models have an EPA rating of 20/27/23 mpg with FWD. The fuel economy is lowered by one mpg when you add AWD.