The 2019 model year Kia Sorento is a three-row, midsize crossover SUV currently in its third generation of production. This year's model marks the typical mid-cycle styling refresh that is common in many vehicles.

In addition to its updated styling touches, more standard features and a third row, allowing seating for seven, come with the 2019 Sorento. The turbocharged 2.0-liter engine option has been discontinued, and a new 8-speed automatic transmission is now standard for Sorentos with the V6 engine.

The Sorento has evolved dramatically over the past several years, as most other Kias have. It is now one of the most versatile, affordable, comfortable, and family-friendly crossover SUVs on the market.

It even won U.S. News & World Report's 2019 Best 3-Row SUV for the Money award. Its size, price point, reliability, and long warranty make the Kia Sorento hard to pass up if you're seeking the best possible value among midsize crossovers.

The Kia Sorento forms nearly the picture-perfect example of a modern midsize SUV. 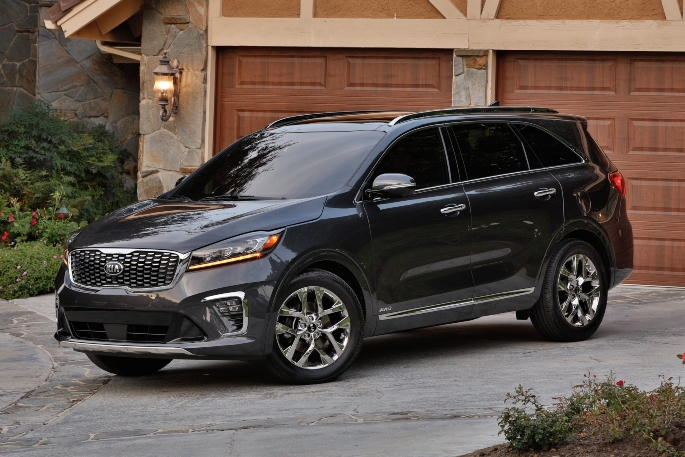 The front features an average-sized, rectangular grille that features Kia's signature "tiger nose" grille. Two subtle trim pieces protrude down from the top and up from the bottom in the middle section of the grille to form its design. Large, long headlights form the rest of the SUV's front section and continue to a point farther along the side of the Sorento to finish its cheeky-looking smile.

The rear of Sorento is quite average in appearance. The taillights feature rounded edges that curve around its side. The high rear window is slightly raked and is finished with a subtle spoiler at the top. The bottom is finished with a stylish exhaust tip.

From the side, the Sorento is similar to many other SUVs. It has a high beltline that extends upward as it travels to the taillights. Its roof is slightly swept and curves gently downward toward the rear. One main character line extends from the bottom of the front door to the rear door and curves up with the rear fender to add dimension.

The windows form a typical umbrella shape. They follow the angled beltline on the bottom and follow the roof at the top, angling downward in the rear to create a sharp point which emphasizes the D-pillar. 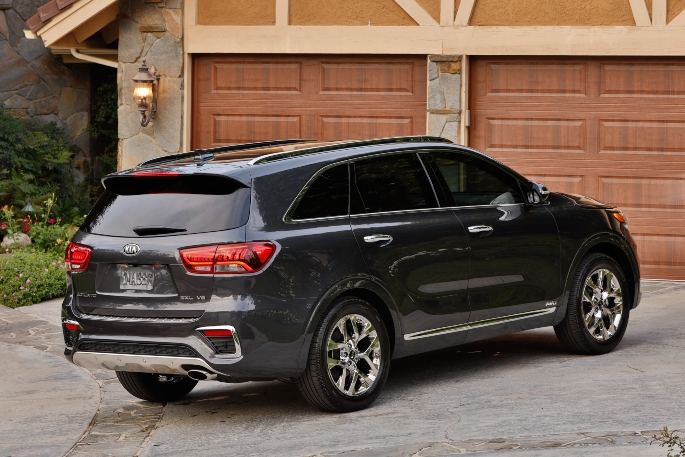 Reviewers praise the 2019 Sorento for its overall comfort and interior quality levels. Most agree that it is one of the most comfortable SUVs at its price point and even rivals some luxury models. The interior quality cannot quite match stellar ride comfort, but the Sorento is ergonomically pleasing, easy to navigate, and filled with nice materials. Testers also commented on the lack of squeaks and rattles, pointing to high levels of quality. 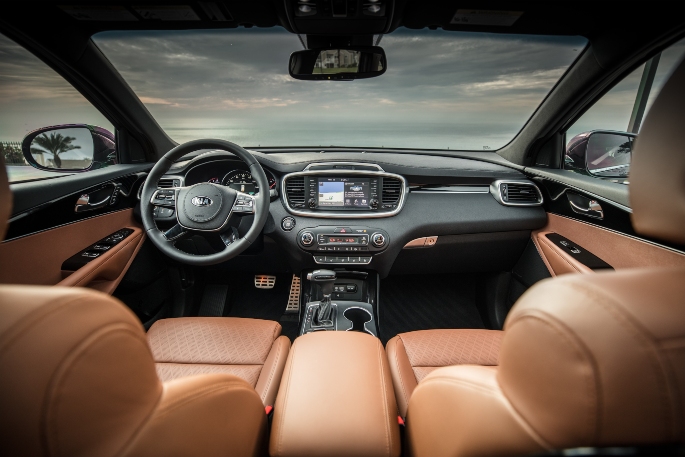 Features like heated and ventilated seats, reclining second-row seats, and acoustic windshield all assist in comfort levels. Reviewers note that the seats are all quite comfortable, save the third-row, which most agree can be challenging to access and is cramped for adults of average height.

Reviewers have no issues with the first and second-row seats. The headroom and legroom are both plentiful for adults.

Other high points noted by reviewers include an incredibly quiet cabin, abundant soft-touch materials, and robust and easy-to-use climate controls. 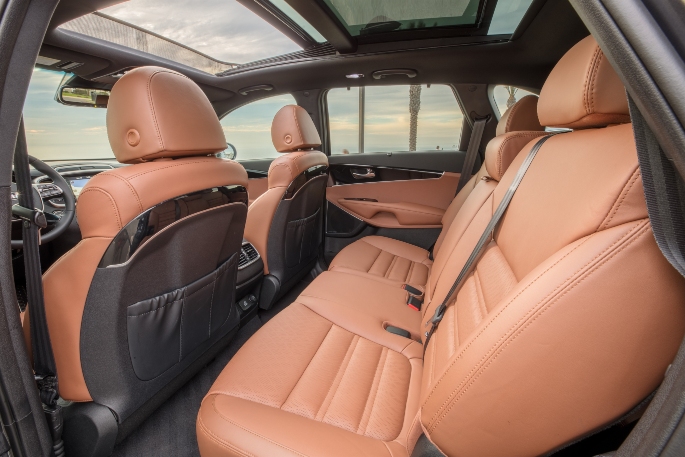 The chief complaint by reviewers is the re-use of some switches and buttons from other Kia models, a minor detail that most buyers probably will not notice. And it could be easily dismissed by users because of the superior comfort levels noted by testers.

Besides the fact that the Sorento is not built to go on any off-road-oriented adventures, the Sorento is very practical and pragmatic. It still features optional all-wheel-drive for adverse weather conditions. 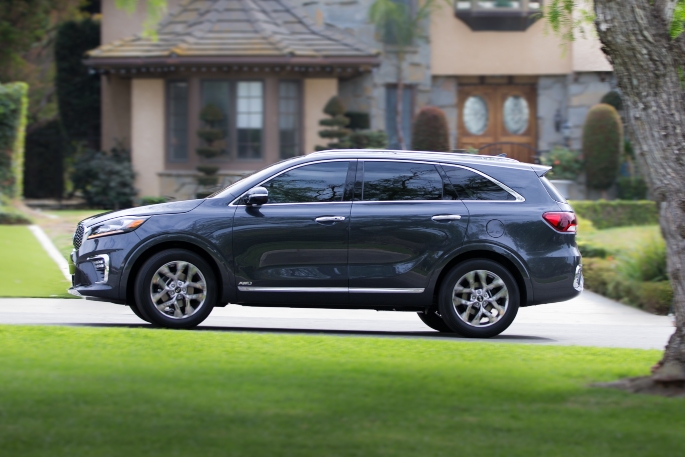 A hands-free power liftgate, low load floor, and low liftover height all make loading and unloading cargo easy. The rear opening is wide enough to expose the cargo area for larger items adequately, and small-item storage throughout the rest of the cabin is quite extensive.

Reviewers are pleased with the ease of access provided by the Sorento. Most agree that getting in and out of the first and second rows is more comfortable than many of its rivals while getting into the third-row seats can be a challenge. Most also agree that the driver's seating position is satisfactory and that good visibility enhances the Sorento's ease-of-use factor. 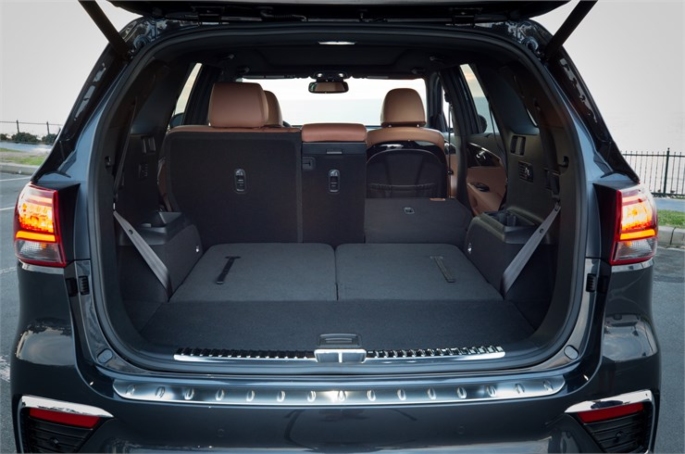 Towing capacity is average for the class at 5,000 pounds. The smaller 2.4-liter engine option is not capable of towing as much as the V6. Factory options such as a roof rack system, running boards, and a tow hitch all help with the Sorento's functional status.

Technology and infotainment have been improved from previous years and are easy to use, according to reviewers.

Kia's UVO infotainment system, mated to a 7-inch touchscreen, is standard. Apple CarPlay, Android Auto, a six-speaker audio system, and Bluetooth round out the standard infotainment features. Other notable standard technology features include automatic headlights, a rearview camera, and a USB port. 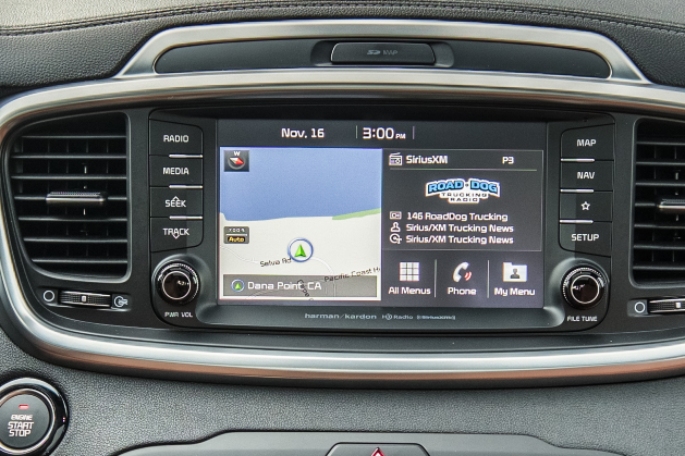 The Kia Sorento is very safe. It earned the highest overall rating from both the National Highway Traffic Safety Administration and Insurance Institute for Highway Safety. The IIHS gave the Sorento its 2019 Top Safety Pick+ award for its crash test performance, active driver assistance features performance and stellar headlight performance.

Reviewers are pleased with the Sorento's driving experience, but all agree that handling, steering feel, braking sharpness, and punchy acceleration all are sacrificed in the name of superior comfort.

The base 2.4-liter four-cylinder engine produces 185 horsepower and 178 lb.-ft. of torque. It is mated to a six-speed automatic transmission and comes standard on the base L and LX trims.

The 3.3-liter V6 engine produces 290 horsepower and 252 lb.-ft. of torque. It comes standard with an 8-speed automatic transmission and is optional on the LX trim and standard on all trims higher than the LX.

Reviewers favor the V6 engine over the smaller four-cylinder, even though most agree that the 2.4-liter is adequate for most in-town commuting. The discontinuation of the turbocharged engine is odd given the massive uptick in turbocharged offerings in the market. But the V6 makes up for it, according to reviewers.

Reviewers note that the 2.4-liter engine lacks grunt when merging onto the highway. The V6 makes up for this with a reasonably quick 0-60 acceleration time of nearly 8.5 seconds. Some testers notice that the automatic transmission is slow to downshift when extra power is needed, but that normal shifting goes mostly unnoticed.

Sport mode surprises many reviewers with its effectiveness. It noticeably sharpens transmission shifting and acceleration pedal response, but most reviewers agree that most will not use it extensively. Also, it does not transform the Sorento's otherwise mundane personality into a sharp handling speed machine.

Steering is noted to be somewhat numb and easy to manipulate. Cornering is largely uninspiring with a safe yet expected amount of body roll, according to testers.

Braking performance is quite good for the class with a stopping distance of 125 feet from 60 mph. Brake feel is adequate, consistent, and with good pedal travel, according to reviewers.

Most reviewers generally agree that the Sorento is a joy to drive under most normal circumstances, but it is not meant to be pushed to its limits. Testers concede that its relatively low handling limits will not frequently be tested by would-be buyers, who will most often purchase the Sorento for its family-friendliness and comfort.

The Sorento's fuel economy is quite good when taking its size and engine options into consideration. Compared to its competition, the Sorento is on par with many comparable midsize SUVs.

When equipped with the four-cylinder engine and front-wheel drive, the Sorento achieves EPA estimates of 22 mpg in the city and 29 mpg on the highway, with a combined total of 25 mpg — adding all-wheel-drive drops these estimates to 21 and 26, respectively.

The Kia Sorento provides an excellent value proposition to would-be buyers. Its low starting price point compared with other similar crossovers is very compelling to budget-minded families. Add Kia's outstanding warranty, the Sorento's better-than-average projected reliability and impressive safety scores, and reviewers agree that the Sorento is one of the top choices in this class.

For those seeking comfort, handsome styling, and great technology features, the Sorento will provide added value. Reviewers agree that the Sorento is one of the best SUVs in the class for driving comfort.

Buyers willing to spend the extra money will be greeted with best-in-class safety features, a more-than-acceptable interior, and an easy-to-use UVO infotainment system. The Sorento offers plenty of features to comfortably transport most families on a long trip or a daily commute.

Available all-wheel-drive adds adverse weather safety, towing capability is normal for the class, and the fuel economy is above average when compared to other SUVs in the segment.

Most reviewers agree that both handling and cargo capacity is still adequate for what most buyers will need in a typical crossover. Both can be easily overlooked for the plethora of other Sorento high points.

All Sorento models, except the base model L, come standard with front-wheel-drive. All-wheel-drive is an $1800 option for all other trims.

The 2019 Kia Sorento is available in seven different trim options:

LX V6 models start at $32,335 and add a power driver's seat and dual-zone automatic climate control to the four-cylinder's standard features. Towing capacity is increased from 2,000 to 3,500 pounds.

The Sorento S starts at $33,745, including destination fee, and comes standard with the V6 engine option.

The Sorento EX Sport starts at $36,035 with destination fee included.

The Sorento EX starts at $36,635 with destination fee included. Most EX features are carried over from the EX Sport with slight variations in options.

Additionally, the Touring Package is optional on the EX trim for $3,400. It includes an upgraded UVO infotainment system with an 8-inch touchscreen display, a 10-speaker Harman Kardon audio system, front parking sensors, the panoramic sunroof from the EX Sport, and a heated steering wheel.

The Sorento SX starts at $41,035 with destination fee included.

The SX is also available with a Touring Package that adds LED headlights, a surround-view camera, and ventilated front seats.

The top-of-the-line Sorento SX Limited starts at $45,735, including the destination fee.

It includes all standard and optional equipment found in each of the lower trim levels and adds heated second-row seating, LED foglights, and a Nappa leather interior.

A fully-loaded Kia Sorento SX Limited will cost just under $50,000.