The 2020 Land Rover Discovery is a midsize crossover luxury SUV that is capable of seating up to seven passengers and last redesigned for 2017. It competes with the Mercedes-Benz GLE-Class, Audi Q7, Volvo XC90, Lexus GX and BMW X5, among other three-row luxury SUVs.

Only minor changes have been made to the 2020 Discovery. The addition of some standard features on several trim levels including a driver drowsiness monitor, LED headlights, and automatic high beam headlights round out the new features.

TLDR: The Discovery is stylish, sleek, and handsome but is more upright than other Land Rover models. 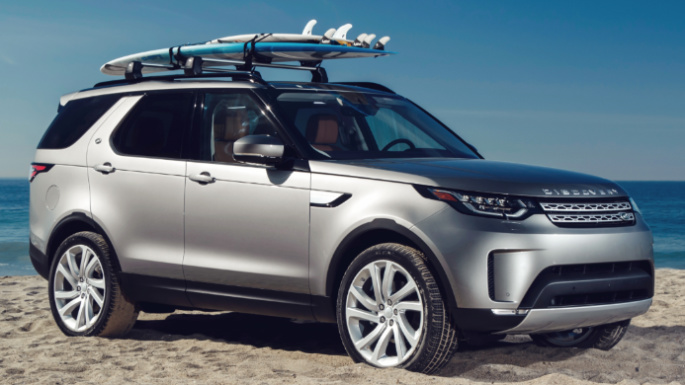 The Land Rover Discovery is very similar in its overall design as the other Land Rovers in the lineup. All are generally categorized by their rounded noses, thin headlights, and relatively sleek appearance when compared to more traditional off-road capable SUVs.

The significant difference in the Discovery's design is that it has a more upright shape than most other Land Rover models. The Range Rover, Velar, and Evoque all have a tapered roofline and rising beltline which pinch the side windows toward the rear of the vehicle. The Discovery has large, square rear windows with a roof that rises slightly in the back to allow for extra headroom, much like the older generations of the vehicle. 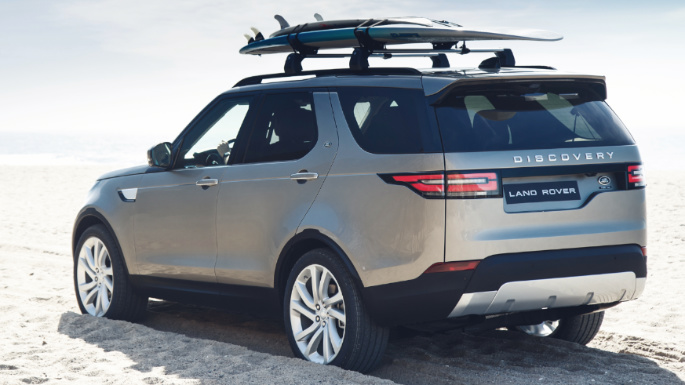 Its front fascia is very distinctive from other SUVs. Small, thin headlights that extend around to the side. And a thin grille that does not extend much farther than the lights give the Discovery a rather broad chin.

Nothing much changes in the rear, with thin LED taillights located high up on the body. The rear exhaust outlets are hidden to complete the sleek look, and the upright rear window extends high toward the roof.

The side profile is dominated by a single character line toward the bottom of the doors and large wheels. The D-pillar is hidden behind privacy glass as in many modern SUVs to make the rear window look like it wraps around the entire back of the Discovery.

Overall, the Discovery looks much more like a traditional, boxy SUV than its siblings.

TLDR: Interior materials are some of the best in class, and comfort levels are satisfactory throughout the cabin despite some reviewer complaints of the limited elbow and shoulder space. 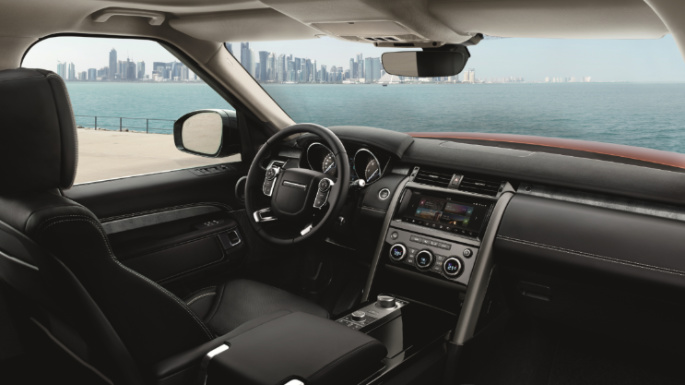 Few testers have anything negative to say about the interior quality of the Discovery. One notes that the design is similar to the larger Range Rover, and all love the high-quality materials used throughout the cabin. Fit and finish are noted to be excellent with little to no wind noise present and the lack of rattles when driving over rough terrain. 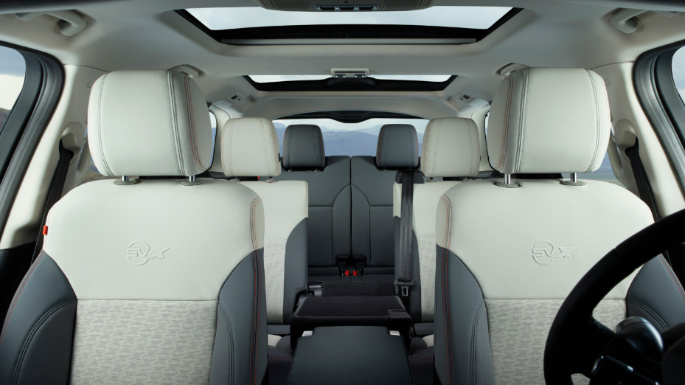 Cabin room is plentiful, including in the third-row seats, according to reviewers. Most note that the elbow and shoulder room can be tight at times, but that legroom and headroom are both excellent.

The Discovery's seats are noted by all reviewers to be another high point in the interior. They are comfortable and supportive. Ride quality couples with the comfortable seats to provide a balanced riding experience, free of excess body roll or an overly stiff suspension. 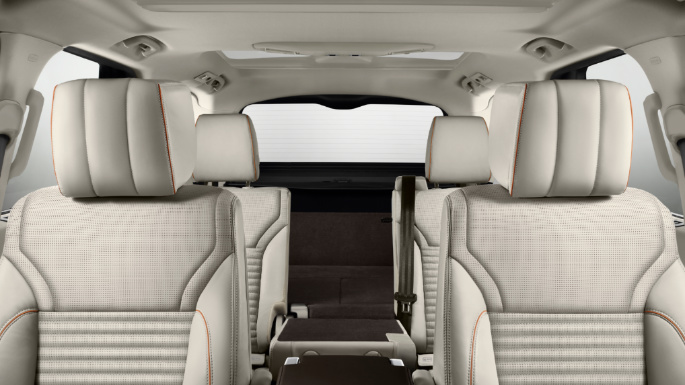 One complaint that testers note is that the doors are wide and large, which can be cumbersome in tight parking situations. Everywhere else, they provide ample room to allow passengers easy access to the front and rear seats. The air suspension can also lower the Discovery for easier overall access.

TLDR: Cargo room is average, yet ample, and utility is nearly unrivaled because of the Discovery's off-road capability and convenient tech features.

Another area in which the Disco shines is in utility and practicality. 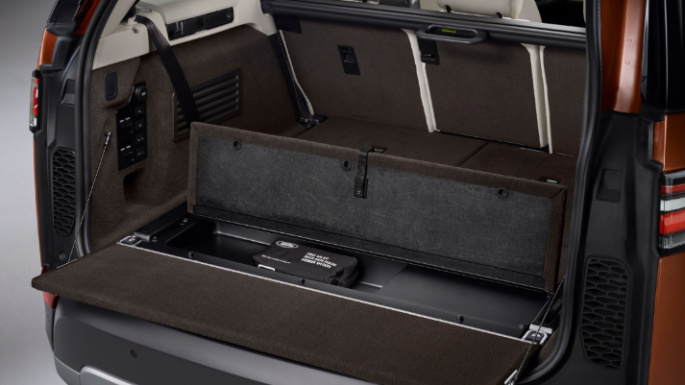 Towing capacity is rated at 8200 pounds, an excellent rating for the class. 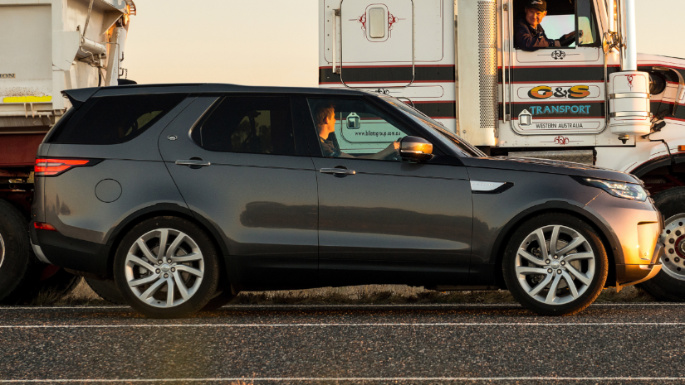 Interior ergonomics are generally satisfactory, though some testers do not find the gear selector dial, located on the center console, to be that useful. Additionally, some did not like that the audio system is controlled almost entirely via the touchscreen. The climate control system is noted to be especially strong, according to testers.

TLDR: Apple CarPlay and Android Auto are not standard on any trim, and the infotainment system frustrates many reviewers. Other technology feature options are good.

The 2020 Land Rover Discovery is packed with technology and top-of-the-line infotainment features. 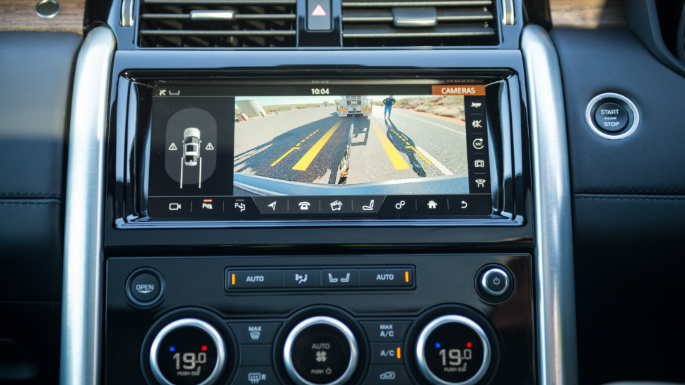 The standard InControl Touch Pro infotainment system is displayed through a 10-inch touchscreen. A Wi-Fi hotspot, navigation system, 10-speaker audio system, Bluetooth, and USB port are all part of the standard system.

Testers agree that the infotainment system function is slow, complicated, and not very intuitive. Though the layout is not overly complicated, the overall infotainment navigation is clunky and not up to par with other systems, according to nearly every reviewer.

Optional features include power-folding rear seats, a two-speed transfer case, quad-zone climate control, a 14-speaker Meridian audio system, Apple CarPlay and Android Auto, and satellite radio. The Active Key, a waterproof wristband that allows you to unlock the car while the remote is inside, is also available.

TLDR: Standard driver assistance aids are acceptable, but some that are standard on competitor models are only options on the Discovery.

The Discovery offers a small amount of standard active safety features for its price point, with more being optional.

Most testers are not satisfied with the number of standard driving aids. Most agree that the Discovery's price point is too high for most available driver assistance aids, if not all, to be included as standard equipment.

Neither the NHSTA nor IIHS have crash-tested and rated the Land Rover Discovery for 2020.

TLDR: The Discovery is surprisingly good in the corners, but its weight shows in acceleration and braking. Two V6 engine offerings showcase its flexibility.

Discovery testers are pleased with the versatility of its driving experience. Even though it boasts extensive off-road credentials, reviewers agree that it does not sacrifice its road manners in on-road driving.

The Land Rover Discovery is available with two engine options.

A 3.0-liter supercharged V6 engine produces 340 horsepower and 332 lb.-ft. of torque. It is the preferred engine of most testers and the engine that provides the most amount of towing capability and overall performance. Also available is a 3.0-liter turbodiesel V6 producing 254 horsepower and 443 lb.-ft. of torque. Its towing capacity is slightly reduced from that of the gasoline engine and offers slower acceleration in exchange for greater fuel economy and cruising range.
Most testers agree that the gasoline engine is the better of the two options and that the slightly increased fuel economy of the diesel does not compensate for its added cost.

An eight-speed automatic transmission is standard regardless of engine choice. No testers have anything negative to say about the transmission as it performs well and is not overly fussy with gear changes.

The Discovery's handling is a pleasant surprise to most. It is competent around corners, steering feel is much better than average, and it is quite fun to drive, according to testers. Putting the Discovery in "sport mode" is also noted by reviewers to make a noticeable difference as the computer sharpens shifting and throttle response.

Road manners are noted to be civilized, smooth, and comfortable. Despite being a heavy, offroad-capable SUV, testers agree that it is very usable as a daily commuter vehicle or family-friendly hauler.

TLDR: The turbodiesel V6 engine gets good fuel economy for the class, while the gasoline engine falls behind many competitors.

Fuel efficiency is a weakness of the Discovery when compared to its competition.

With a combined rating of 18 mpg in gasoline V6 form, the Land Rover Discovery lags far behind its primary competitors. The Mercedes GLE400 returns a combined 20 mpg, the Audi Q7 at 21 mpg, and the BMW X5 returns 22 when equipped with their respective base engines.

TLDR: A vast number of optional features are offered throughout the range, but some competitors undercut the Disco in feature-to-price ratio.

Four-wheel-drive is standard on all trim levels of the Discovery as well as an automatic eight-speed transmission. Both the supercharged V6 and turbodiesel engines are available on all trim levels, but the diesel is a $2,000 extra.

The Land Rover Discovery SE starts at an MSRP of $53,975, including destination charge.

The Drive Package includes road sign recognition, adaptive cruise control, high-speed automatic emergency braking, and blind-spot monitoring for an additional $1,900. Upgrading to the Driver Assist package and a top-down surround-view camera is included with all of the safety features from the Drive package for an additional $3,600.

A Cold Weather Package is available and for $1,275 and includes heated front seats, heated rear seats, and a heated steering wheel.

Standard equipment includes the equipment from the SE in addition to 20-inch alloy wheels, fog lights, a panoramic sunroof, three-zone automatic climate control, and the features from the Drive package.

Most packages from the SE remain options for HSE models including the third-row seating option, Smartphone Package, and Cold Weather Package.

The Capability Plus Package features the upgraded Terrain Response 2 system for additional off-road capability, as well as a locking rear differential and All-Terrain Progress Control.

Optional extras include a water wade-sensing system, a 14-speaker Meridian audio system, a head-up display, and a rear-seat entertainment system.

The Discovery SE offers good value when several options are equipped. It allows the price of the Discovery to remain lower than higher trim levels with added customization for customers' exact needs.

Despite the plethora of new technology, safety, and comfort features, the Discovery still does not offer several increasingly common features, such as blind-spot monitoring, Apple CarPlay, and Android Auto, as standard equipment. The base SE remains reasonably competitive in its class at under $55,000 because of its superior blend of capability and comfort.

If comfort, style, and supreme off-road ability are important factors in a vehicle purchase, the Land Rover Discovery will present a good value. If the best features, the best safety, and the largest, most family-friendly luxury SUV option is a top priority, the Discovery will not present as good of a value.

Many reviewers also warn of potential reliability issues for most Land Rover models. Although J.D. Power and Associates, along with many other automotive testing agencies, have not tested long-term reliability, Land Rover has a traditionally struggled in this department.