The 2019 Land Rover Range Rover is a large made luxury SUV which is now in its fourth generation of production.

The lone new feature for the 2019 Range Rover is a new plug-in hybrid powertrain option which adds a reported 31 miles of all electric range.

The Range Rover is an iconic British vehicle, co-owned by Jaguar, with a world-renown combination of luxury and off-road capability. Options are plentiful, its design is handsome, and performance isn’t lacking for Land Rover’s flagship model.

The Range Rover is large with a tall cabin and a commanding road presence.

Similarly to the Land Rover Ranger Rover Sport, it does not look as off-road capable as it really is. Large 20-inch wheels fill out the wheel wells nicely and make it look sporty and athletic. 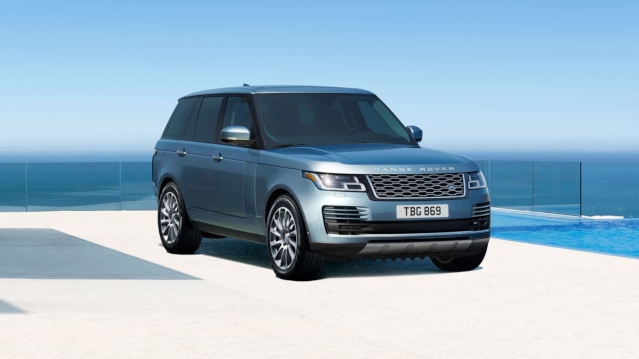 The front is nicely rounded like it sibling, the Range Rover Velar, while the character lines flow back across the body making it almost look wind-swept. It doesn’t look mean nor does it have sharp lines like many modern vehicles. It also doesn’t appear lumpy or generic.

A long wheelbase version of the Range Rover is available which makes it look even larger than the standard wheelbase SUV.

Interior quality is second to none, though some reviewers said the overall styling was bland and uninteresting compared to the competition.

The Range Rover is both superior and inferior in terms of interior space and seating. It doesn’t offer a third row like many of its competitors, but that allows for more overall space everywhere else. 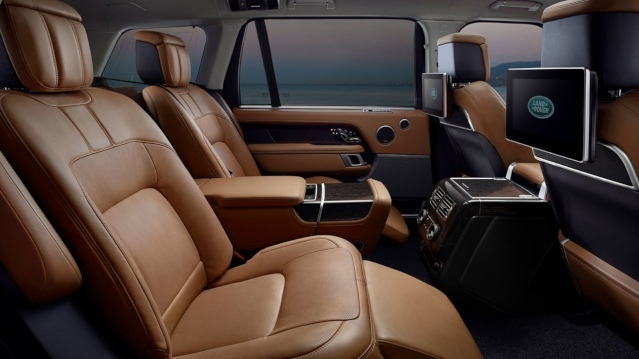 One reviewer notes that three adults could comfortably sit in the rear seats, especially when opting for the long wheelbase version which adds more than seven inches of leg room for the rear passengers. Both front seats and rear seats are noted to be extremely comfortable and supportive.

Ride comfort is a noted plus with Land Rover’s adaptive air suspension system smoothing out most road impurities. The large wheels are said to cause more than desired road noise, but that the ride is still quieter than most.

Utility is where the Range Rover shines the most.

It is well suited for city, country, and off-road driving. Offering a combination of comfort, sportiness, and true off-road capability from its permanent 4-wheel drive and terrain response selection systems, it is unrivaled in terms of its all-around capability.

Cargo space is large because of Range Rover’s size but is small compared to others in the segment. It offers 68.6 cubic feet of cargo room when the rear seats are folded down and an additional 7 cubic feet of space for the long wheelbase model. 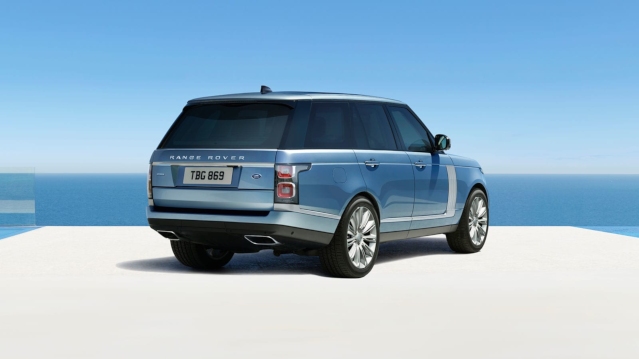 An Executive Class Seating Package is an option which offers more rear legroom and luxury seating options but less storage in the cargo area. Space is cut to 24.5 cubic feet.

Almost 32 cubic feet of space is offered when the rear seats are in their upright position.

A LATCH child safety seat system is equipped on both rear seats for added practicality.

Cubbies and storage pockets are present throughout the cabin for smaller items.

Loading items into the cargo deck is made easy by the split tailgate which is also power and gesture operated. The advanced suspension system can even lower the Range Rover for an easier load height.

Towing capability is strong at a maximum of just over 7500 pounds.

Though practicality is reduced for lack of a third row seating option, the second row seats are spacious and comfortable, even for a family of five.

The Range Rover is abundant in technology features, but reviewers generally didn’t like the Touch Pro Duo touchscreen infotainment system.

Many said it was too complicated, not as responsive as other competitors’ systems, and outdated. Despite this, the infotainment system consists of two, 10-inch touchscreens and is highly configurable.

A 13-speaker Meridian Sound System is standard with 19 and 29 speaker upgrades available. HD radio, satellite radio, Bluetooth, climate and radio controls, a navigation system, and a Wi-Fi hot spot are all accessible through the system. 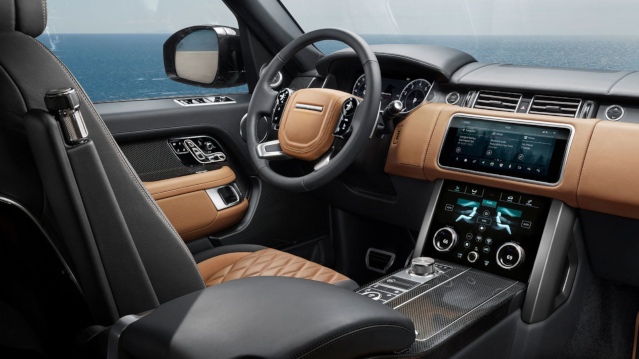 Though the 2019 Range Rover has not yet been crash tested by the Insurance Institute for Highway Safety, it does come standard with a large amount of driver assistance technology.

Reviewers of the Range Rover are not surprised by the great ride quality, off-road capability, and excellent range of engine options.

Land Rover offers six engine options, all paired with an eight-speed automatic transmission. All reviewers thought each engine delivered good power and acceleration, but the V8 engine options outshone the rest according to those who drove the vehicle.

The base supercharged 3.0 liter V6 engine produces 340 horsepower and 332 lb-ft. of torque.

The same supercharged V6 engine is offered with an increased 380 horsepower and 332 lb-ft. of torque for those who want more power.

The supercharged 5.0 liter base V8 engine produces 518 horsepower and 461 lb-ft. of torque.

The same supercharged 5.0 liter V8 engine is available with an upgraded 557 horsepower.

The new plug in hybrid powertrain, called the P400e by Land Rover, features a 2.0 liter turbocharged four cylinder engine which produces 398 horsepower when combined with its electric motor.

All engine options are paired to an 8-speed automatic transmission.

Testers universally praise the driving experience of the Range Rover regardless of the engine option. All are surprised by the quickness of the hybrid and diesel powertrain options.

All testers are also completely satisfied with the Range Rovers V6 engines, citing them as competitive with the rest of the segment’s predominantly V8 engines.

Handling is noted to be solid with little body roll and confidence during cornering. Maneuverability is also a plus with reviewers. The Range Rover is large but feels smaller due to its tight turning radius and nimble steering feel.

Testers mentioned the “sport mode” provides a snappier feel when accelerating and cornering.

Acceleration is noted to be stellar, especially with the V8 engines propelling the three ton SUV to 60 miles per hour in under five seconds.

Braking is also good with a solid feel throughout the pedal travel.

The Range Rover excels in fuel economy, because it offers two V6 engine choices and a turbodiesel engine.

The new PHEV plug in hybrid hasn’t been awarded EPA figures as of yet, so the 3.0 liter turbodiesel V6 engine gets the best fuel economy with 22 miles per gallon in the city and 28 miles per gallon on the highway.

The BMW X7 gets slightly better gas mileage with EPA estimates of 20 and 25 miles per gallon in city and highway driving respectively.

Stepping up to the V8 engine options will decrease fuel efficiency significantly.

With as much performance as the Range Rover has, and for as well-rounded of a vehicle as testers claim, it has a much higher price tag than many of its competitors. Fully loaded, a top-of-the-line Range Rover can cost well over $200,000.

The price tag makes the Range Rover not as good a value as others in the segment like the Lincoln Navigator and Toyota Land Cruiser.

With a starting price at just under $90,000, the Range Rover is $5000 more than a base Land Cruiser with third row seating, greater towing capability, and greater reported reliability.

The base model Land Rover Range Rover is equipped with the base 3.0 liter supercharged V6 engine.

Pricing starts at slightly less than $91,000 with destination included.

All V6 and V8 engine options are available for the base trim but will cost extra, including the turbodiesel V6.

The Range Rover HSE starts at just under $96,000 with destination included. It is the only trim available with which to add the new PHEV plug in hybrid powertrain option, an $1100 upgrade from the base 3.0 liter supercharged V6 engine.

The HSE includes technology features such as heated steering wheel and rear seats, a panoramic sunroof, and upgraded 20-inch wheels.

Optional safety equipment include the same as the base Range Rover with the addition of road sign recognition, parking assist, and lane keep assist.

The Range Rover Supercharged is the lowest trim level that comes standard with the supercharged 5.0 liter V8 engine. Pricing starts at $106,750 including destination.

Starting with the Supercharged trim, the long wheelbase option can be had for an additional $4000. A locking rear-differential can also be added for even greater off-road capability.

The Range Rover Autobiography comes standard with the 5.0 liter supercharged V8 engine and starts at just under $144,000 with destination included.

Opting for the LWB Autobiography will cost an additional $6000.

A refrigerated rear center console and entertainment system are both optional upgrades.

The Range Rover SV Autobiography Dynamic tops out the range with a starting price of $179,000. The more powerful 557 horsepower V8 engine is standard.

The long wheelbase version starts at a monstrous $209,500 with destination included.

All options available on the lower Range Rover trims are standard on the Autobiography Dynamic with the exception of the rear entertainment system and adaptive cruise control. Both are optional extras.

Land Rover’s Wade Sensing system is also optional on the top trim levels of the Range Rover line. This system allows the Range Rover to drive through up to 35 inches of standing water and displays the water depth on the interior instrument panel.