The 2020 Mazda CX-5 returns as one of the most stylish compact SUVs on the market. With more of an emphasis on style and handling rather than sheer hauling ability, the CX-5 toes a line between some of the more mainstream offerings among SUVs, and the more stylish and upscale premium and luxury models. With a choice of engines and a wide range of trim levels, the lineup straddles the space between mainstream and premium. And the number of standard driver assistance safety features could attract buyers from all corners.

Mazda would also argue the CX-5 can be considered a rival to some versions of the Audi Q3, BMW X1, and Volvo XC40 premium SUVs. 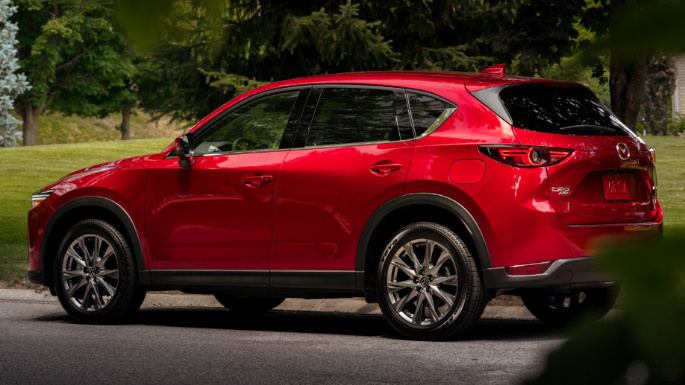 TL;DR Stylish, but not overly so, the CX-5’s exterior design balances sporty and refined traits.

The Mazda CX-5 tries to break the compact SUV mold with more striking design features than the norm, and it mostly succeeds.

While it’s still an SUV in profile, the CX-5 adds a touch of sleekness and still looks like a practical vehicle. There is a generous amount of chrome front and rear, but it looks slightly like brushed metal rather than a blinding piece of brightwork. Careful metal impressions are pressed into the side panels, and there are stylish details in the LED accents for the headlights and taillights. And the plastic molding meant to indicate that this is an SUV is kept to a minimum, unlike many of its rivals.

Some may not like the fact the CX-5 doesn’t scream rugged, but there are plenty of other choices like that from makers such as Jeep and Subaru. Or that it’s not oozing in modern style like a Volvo XC40. But there’s a certain discretion to the Mazda that some may find just right.

TL;DR All versions have a stylish design, but upper levels have especially nice materials. 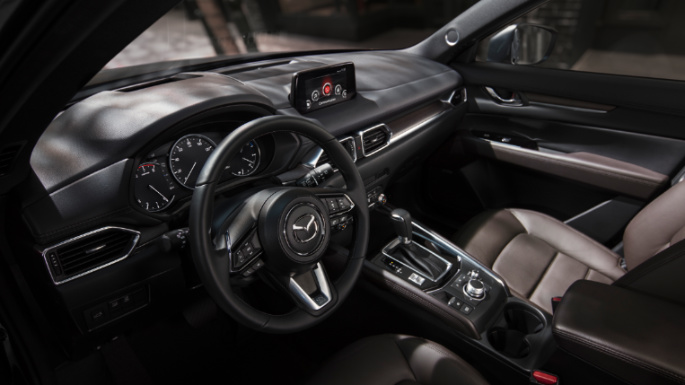 Like the outside, the Mazda CX-5’s interior doesn’t overdo it on the styling front, but it has nice detailing that gives off an air of quality not typical of similarly priced compact SUVs.

The dash is devoid of much switchgear, dominated by an infotainment screen and physical climate controls. Those climate controls also have an upscale, almost Audi-like design with their very good imitation metal knobs. While the instrument panel isn’t the fully digital display offered by Audi, or on the Ford Escape for that matter, it’s legible and displays information in a logical way. A rotary knob on the console does most of the controls for the infotainment system.

The CX-5 Signature models go further with richer leather seats and real wood inserts on the door panels and dashboard.

TL;DR Sufficient, but the numbers show the CX-5 picks form over function. 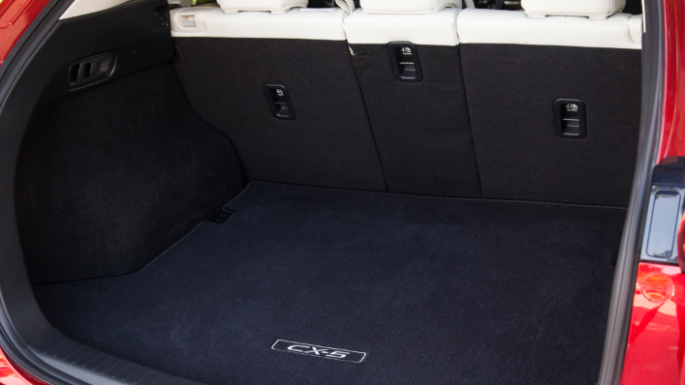 The Mazda CX-5 is an SUV, so it’s expected to offer good utility and practicality. And it’s up to the challenge, even if it’s not the last word in cargo space.

Space with all seats up is 30.9 cubic feet or 59.6 feet with all of the rear seats folded down. That’s slightly better than a BMW X1 and noticeably more space than an Audi Q3 or Volvo XC40 provides.

But among mainstream rivals, the CX-5 trails the Ford Escape and Toyota RAV4 and is far from what a Nissan Rogue or Volkswagen Tiguan can offer. The Tiguan can even be equipped with a third row for seven-seat capacity.

TL;DR It’s pretty much all there, but the infotainment system is a clunky, old design. 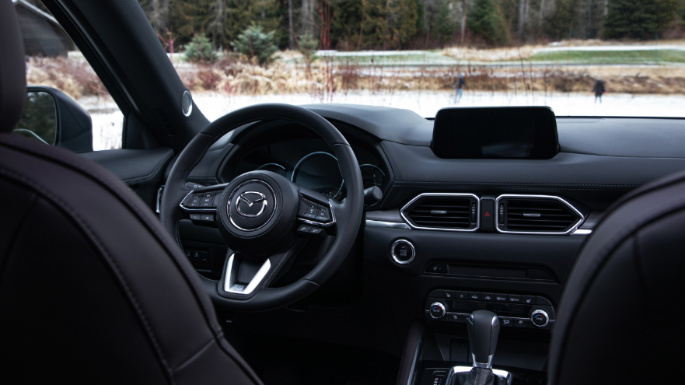 A more significant failing of the CX-5’s premium pretensions is the antiquated technology surrounded by the stylish interior.

All CX-5 models use a touchscreen infotainment system accompanied by a console-mounted rotary controller. Lower models use a 7-inch version of the technology, while turbocharged models upgrade to an 8-inch unit. The knob is the primary way to navigate the screen, but you can use it as a touchscreen when the vehicle is stationary.

Controls for all vehicle settings, media, and available navigation system are operated through the screen with only a physical knob for volume and tuning on the console. But the system is sometimes slow to boot up and switching between menus is also slower than on most rivals. The screen itself is a relatively low resolution, too. At least climate controls are only operated through physical buttons and knobs.

Android Auto and Apple CarPlay are standard on all but the base model, and while only the top Signature includes built-in navigation, it can be added as a dealer-installed accessory on most models.

Most models have two USB ports in the front and two in the rear seat area.

TL;DR Standard driver assistance technologies is a huge plus. 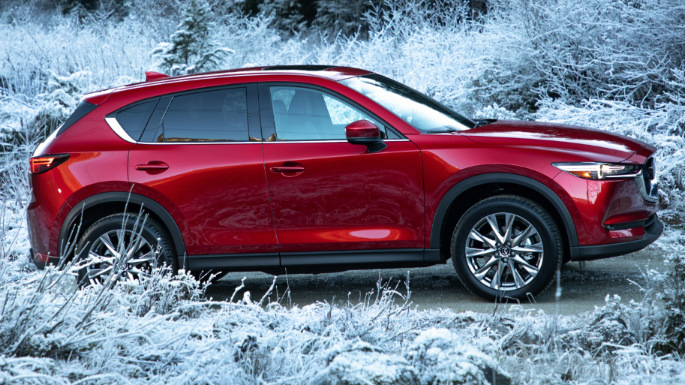 Mazda is one of the few automakers that decided to make driver-assistance technologies standard across their lineup, and the CX-5 greatly benefits from this. All models receive automatic emergency braking with pedestrian detection, blind-spot monitoring with rear cross-traffic alert, adaptive cruise control with stop-and-go assist, lane departure warning with lane-keep-assist, and automatic high beam control.

The Honda CR-V, Nissan Rogue, and Toyota RAV4 offer most of these features, but some make you pay extra for one or two of those features. All other rivals only make these optional, and unavailable on some trims. Luxury brands, especially, make you pay for anything more than automatic emergency braking.

TL;DR Few compact SUVs at any price are as fun to drive as the CX-5. 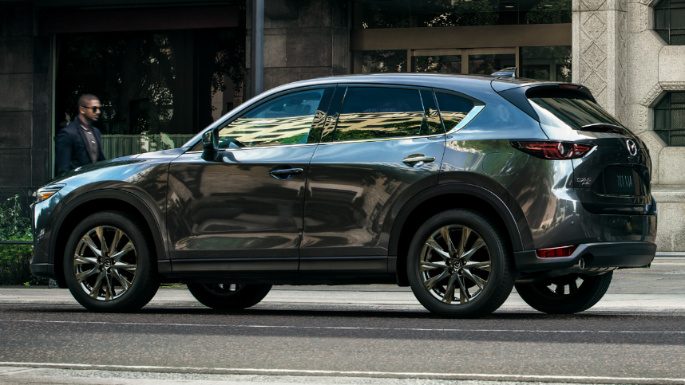 Where the Mazda CX-5 redeems its niggling faults is in the way it drives.
There is an excellent balance between a comfortable ride and taut handling, according to reviewers, and while there is some noise from the 19-inch wheels on some models, it’s relatively well managed. Steering and braking also have an accuracy unusual of tall vehicles, and some say the CX-5 drives more like a sedan than a compact SUV – if not exactly a sports car.

The standard 2.5-liter four-cylinder engine has 187 horsepower and can only be equipped with a six-speed automatic.

The Grand Touring and Reserve and Signature models have a turbocharged 2.5-liter four-cylinder with 250 horsepower, more than most vehicles of this class provide. Reviewers find the standard engine adequate for most uses, but it still needed to be pushed in certain conditions, especially on hills or with a fully-loaded vehicle. The turbo is noticeably more energetic and allows drivers to pass with more confidence. But rivals offer eight-speed transmissions or continuously variable transmissions that better manage the power than the Mazda’s six-speed automatic.

Still, among compact SUVs and premium compact SUVs, the CX-5 is among the best for driver enjoyment. 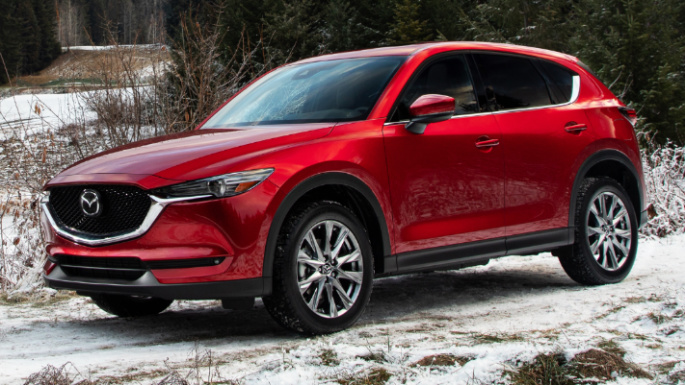 Grand Touring Reserve and Signature models with the turbocharged engine are rated at 22 city, 27 highway and 24 combined.

That places the CX-5 midpack or toward the bottom of compact SUV fuel economy ratings. The Ford Escape, Honda CR-V, and Toyota RAV4 with front-wheel drive and their base engines are around 30 mpg and hit as much as 35 on the highway.

And mainstream models from Ford, Honda, and Toyota also offer their compact SUVs with hybrid powertrains and fuel economy that trounces anything the CX-5 can do.

TL;DR For everything the CX-5 offers, it also seems reasonably priced.

The 2020 Mazda CX-5 is available in five trim levels. All-wheel-drive is an option on all models except for the Grand Touring Reserve and Signature, where it’s standard.

The CX-5 Sport starts from $26,290 MSRP including a $1,100 destination charge. It comes with the 2.5-liter four-cylinder engine with 187 horsepower and 186 lb-ft of torque, mated to the six-speed automatic transmission.

The value proposition for the Mazda CX-5 rather depends on what is important in a compact SUV. This vehicle does have all of the bases covered, with good practicality, generous equipment levels, excellent safety – and it’s fun to drive as a bonus.

The Ford Escape is more efficient and offers more extensive technology features with better infotainment but isn’t as fun to drive, as well-finished inside, and its most expensive versions are more expensive than the Mazda’s.

The Honda CR-V is significantly larger inside, its base engine is more efficient, and it also offers a hybrid version, but also lacks the Mazda’s driver-oriented feel.

The Volvo XC40 also has more technology features with a better infotainment system and a better brand cachet, but a top-level Mazda CX-5 costs about the same money as a basic XC40.

It’s easy to be lured into the higher trims of the CX-5 with their turbocharged engines and higher levels of luxury, but the Grand Touring trim at around $33,000 is close to higher levels of the CR-V, Escape and RAV4, but offers premium features such as heated rear seats, navigation, and Bose audio.

The 2020 Mazda CX-5 may not be for the mainstream buyer, but it could be for someone who wants something different from the typical compact SUV, or a driver’s car with space for cargo or a premium product without a snobby badge. Whatever the case, the CX-5 is an accomplished vehicle.