Powertrain: A 2.5-liter four-cylinder engine with 187 horsepower and 186 lb-ft of torque, with a 6-speed automatic transmission and front-wheel-drive.

A turbocharged, 2.5-liter four-cylinder engine with 250 horsepower and 310 lb-ft of torque is available, with a 6-speed automatic and front-wheel-drive. 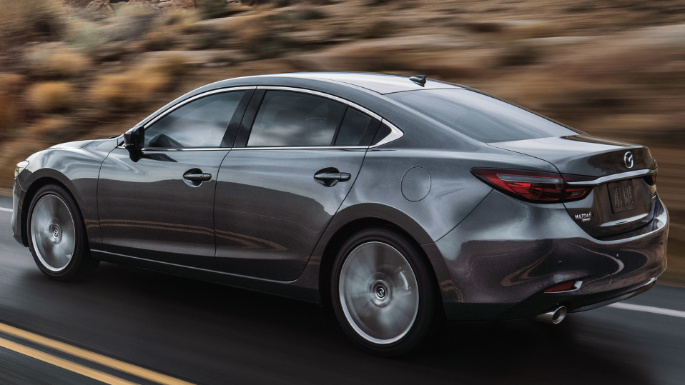 The Mazda6 represents an offbeat choice among midsize sedans. That doesn't mean it doesn't do midsize sedan duties well, however -- far from it. But while accomplishing what its rivals do, it adds an extra dose of style and driving fun that's unexpected in the class. Throw in a generous equipment roster, powerful optional turbocharged engine, high-end interior materials, and sharp athletics, and the Mazda6 is an unexpected gem in a competitive class.

After receiving some refinements for 2019 that included making numerous driver assistance technology features standard on all models, the only change for 2020 is a new remote key fob for the top-tier Mazda6 Signature model. 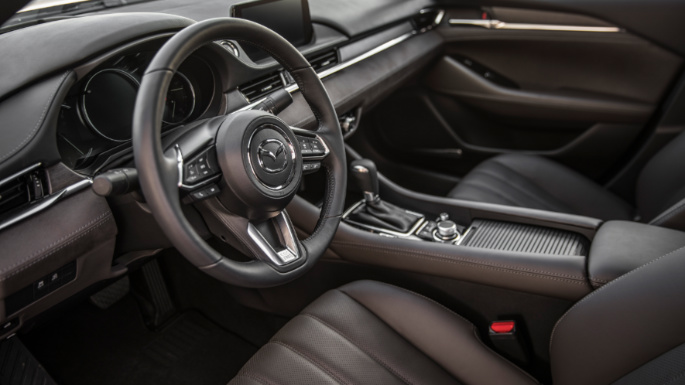 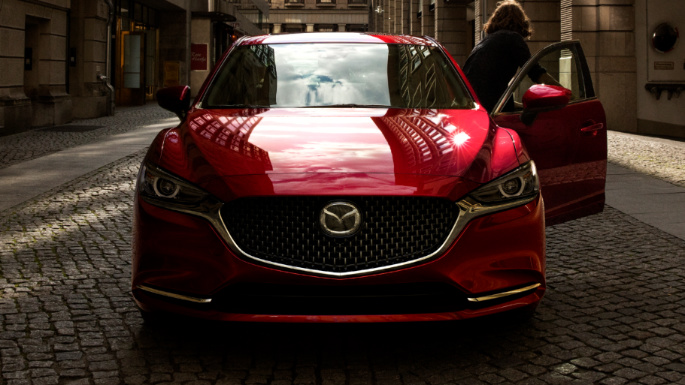 The base Sport model kicks off at just over $25,000 and includes a wealth of driver assistance features, as well as 17-inch alloy wheels, auto-leveling headlights, and dual-zone automatic climate control. Touring models for about $2,500 more get 19-inch wheels, a power sunroof, and leatherette upholstery, while many rivals still use cloth upholstery and smaller wheels at this price. For about $31,000, however, the Grand Touring comes with the more powerful, 250-horsepower turbocharged engine, as well as auto-dimming interior and exterior mirrors and satellite radio. That's a relative bargain when one considers a similarly priced Honda Accord, Nissan Altima, or Toyota Camry will have a less powerful engine.

Grand Touring Reserve and Signature models come lavishly equipped with ventilated front seats, heated rear seats, higher-quality Nappa leather upholstery, and the Signature gets real wood trim. While nearly $37,000 is a lot to pay for a Mazda6, it compares favorably to a similarly equipped Buick Regal Sportback, Kia Stinger, Volkswagen Arteon, or even a compact luxury car such as an Acura TLX. 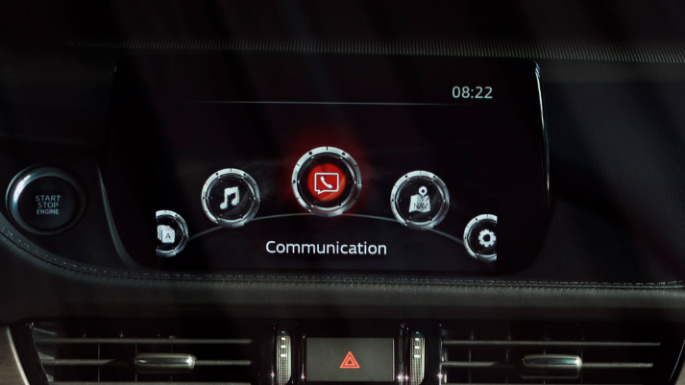 All models use an 8-inch screen for the infotainment system using the previous-generation MazdaConnect system. Unlike the infotainment setup in the Mazda3 and CX-30, the Mazda6's system incorporates both a touchscreen and a console-mounted wheel selector. Only the base Sport version does without Apple CarPlay and Android Auto compatibility, but it's standard on all other models. Touring and higher trims also include two USB charging ports for rear passengers, but no version comes with built-in navigation, and it's only available as a dealer-installed accessory.

The infotainment system itself looks archaic and has a basic-looking map for navigation functions. Using Apple CarPlay or Android Auto also shows off the relatively low resolution of the screen. But the system itself is slow to process, and matters aren't helped by the way the menus are laid out, forcing lots of scrolling with the console-mounted wheel. Touchscreen functionality is only available when the car is stopped and in Park. Nearly all of the Mazda's rivals are more advanced in this regard, and even less expensive Mazdas with the company's latest system perform better. 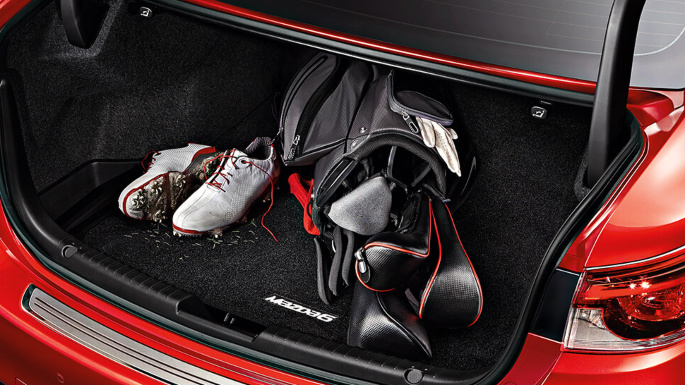 The Mazda6 is on the shorter side in terms of length compared to midsize sedans today, and it's most evident in the interior. The headroom is noticeably less than in competitors like the upright Subaru Legacy due to its sloping roofline. Rear-seat passengers get hit with both less headroom and legroom than in some rivals. Four adults should be okay in the Mazda, but five will be more of a squeeze than in a Hyundai Sonata, for example. At least the IIHS stated the Mazda6's LATCH connectors for child seats in the rear were easy to find, and the doors open wide enough for loading children. But kids may have a more challenging time seeing out thanks to smaller windows than in something like the VW Passat.

At 14.7 cubic feet, the Mazda6's trunk is also off the pace for the class. While 60/40 split-folding seats come standard, the space left with them up is 0.4 cubic feet behind the somewhat pokey Subaru Legacy and Toyota Camry, and less than the 16 to 17 cubic feet that's the midsize sedan norm. And it's way off of the 31.5 cubic feet offered by the hatchback-style Buick Regal, which can be expanded to an SUV-like 61 cubic feet with its rear seat folded down. 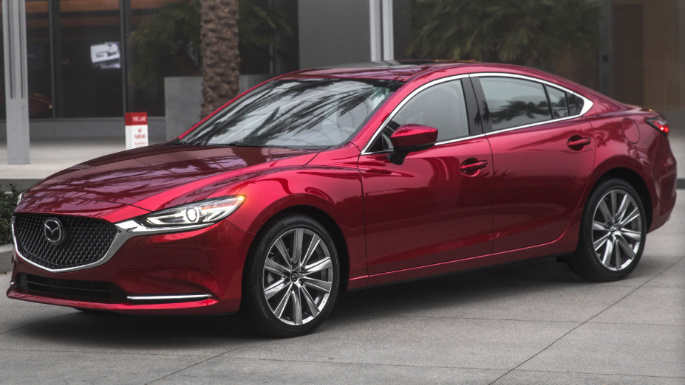 While nearly all midsize sedans in the last decade have been experimenting with more adventurous designs than the bland, boxy shapes of old, the Mazda6 has sported the same profile since it arrived in 2014. That's far from a bad thing, though, as it remains one of the sleekest sedan designs at nearly any price. Detail changes over the years have added a more striking grille design and various other add-ons, but the essence has been left unblemished. Base Sport models use 17-inch wheels, while all others get 19s to take advantage of the large wheel arches.

Interior quality is exceptionally high in places, average in others. The cloth upholstery on the Sport model is relatively mundane, and the synthetic leatherette in Touring and Grand Touring cars isn't the most convincing imitation for real leather ever. Still, it's nicely stitched, and an upgrade from the fabric most rivals offer for around $30,000. Grand Touring Reserve cars get actual leather upholstery that's high quality. But the Signature gets luxurious Nappa leather upholstery and faux-suede inserts on the dashboard and headliner, as well as real wood on the dashboard and the doors. None of Mazda's competitors can top that. Unfortunately, some of the plastics on the lower console and door panels feel more befitting a $20,000 car than a $35,000 one.

Storage space is another area where the Mazda is merely average. While it doesn't lack space, the door pockets aren't exactly spacious, and there are just two cupholders up front for odds and ends, but nowhere specific to devote to keys or a phone or a wallet, and the storage under the console isn't generous. Only the Signature model gets a sunglasses holder. 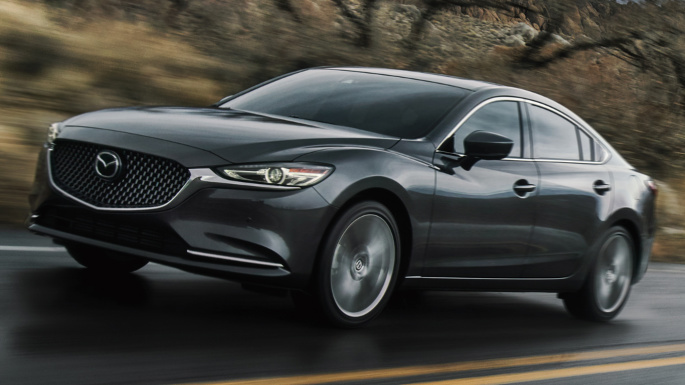 The Mazda6's calling card is the way it drives. The athletic exterior design is not let down by its on-road performance. Steering is direct, handling is responsive, and not at the expense of ride comfort, either. Since its introduction in 2014, Mazda has continuously refined the car to make its interior quieter, too. While it's not as serene as a Toyota Camry, the Mazda6 is hardly loud inside. The Mazda6's slimmer exterior dimensions also help in this regard, and it invokes a sports sedan-like feeling more than any midsize car, and about as well as the more expensive Arteon and Stinger.

The fly in the driving experience ointment on the Mazda6 is the standard engine. The 184-horsepower 2.5-liter four-cylinder isn't as flexible as the smaller turbocharged engines on vehicles such as the Ford Fusion, Honda Accord, Kia Optima, or even the less-powerful VW Passat. The 6-speed automatic transmission, the only choice, is well-matched to the engine, but eight, nine, or 10-speed transmissions on models such as the Buick Regal can be more responsive.

By contrast, the 250-horsepower turbo four-cylinder on Grand Touring, Grand Touring Reserve, and Signature cars is smoother and makes acceleration nearly effortless -- even if it's somewhat of a stretch to call it quick like a V6-powered Toyota Camry. But it's enormous 310 lb-ft of torque makes it very flexible. All-wheel-drive, as offered on the Camry, Fusion, Regal, Nissan Altima, and standard on the Subaru Legacy would make the Mazda more secure. But it manages its power well thanks to a special program to braking while cornering and minimize wheelspin. 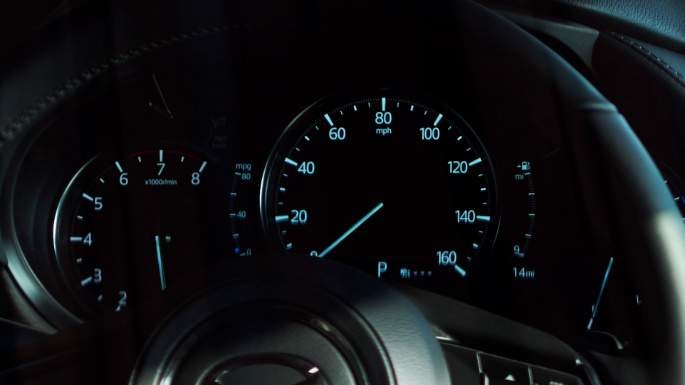 The 2020 Mazda6 with the 2.5-liter base engine is rated by the Environmental Protection Agency (EPA) at 26 mpg city, 35 mpg highway, and 29 combined. The turbocharged models are rated at 23 mpg city, 31 highway, and 26 combined.

The Ford Fusion 1.5 turbo, Kia Optima 2.4-liter, and all versions of the VW Passat are rated slightly lower than the 2.5-liter Mazda6. Turbocharged versions of the Mazda get comparable economy figures to the Honda Accord with its larger, 2.0-liter turbo engine and the more powerful Toyota Camry V6. However, the Nissan Altima, with its optional turbocharged engine, is rated at three mpg combined higher than the Mazda6 turbo models.

However, the Mazda also can't compete with several models that now offer hybrid or plug-in hybrid variants. The Ford Fusion, Honda Accord, Hyundai Sonata, Kia Optima, and Toyota Camry all give customers the option of some electrification. In the case of Ford, Honda, and Toyota, the price difference is easily offset by the fuel economy gains. 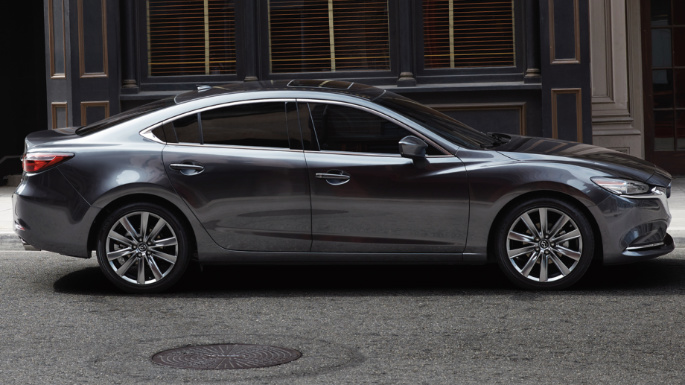