Vehicles with self-driving features may promise a stress-free experience, but many consumers say concerns about driver liability would actually make it more stressful to use them.

That’s according to a recent survey by Autolist.com, which found that 49 percent of consumers would be slightly more stressed or significantly more stressed while using a vehicle’s hands-free or self-driving features if the driver were liable in a crash.

That figure dwarfs the number of people -- 13 percent -- who said these features would make them slightly less stressed or significantly less stressed. Nineteen percent of consumers said their stress levels would be about the same; the final 19 percent were unsure. 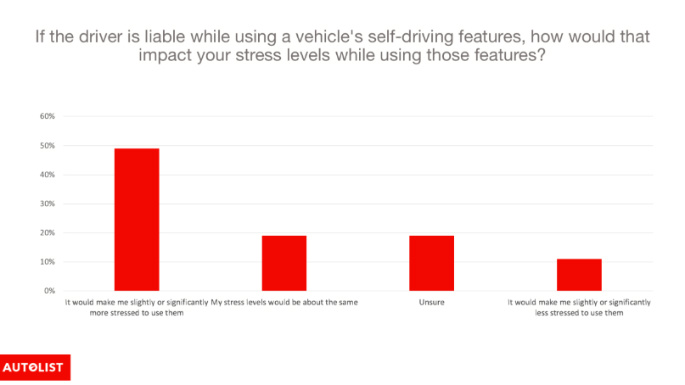 “It’s still the Wild West in terms of liability when a self-driving or hands-free vehicle crashes,” said David Undercoffler, editor-in-chief of Autolist.com. “This survey shows the potential chilling effect the lack of court precedents and U.S. regulation could have on widespread use of these features.”

Autolist surveyed 3,380 car shoppers in early 2021 about their sentiments towards advanced driver-assist systems (ADAS) and hands-free and future self-driving features. Autolist published a story looking at consumer attitudes on these systems’ cost in January, and a look at the ADAS features shoppers most wanted and how they viewed the safety impact of these systems in February.

Who’s Liable
Autolist’s survey also found that only about a quarter of consumers (24 percent) believed the driver would be the liable party should a vehicle with self-driving features cause a crash. 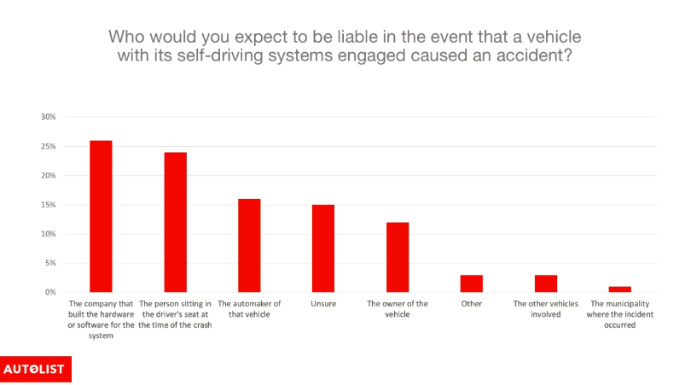 Here’s a breakdown of who consumers expected to be liable:

The reality of just who will be liable when a vehicle with its self-driving features engaged gets into a crash remains murky.

Most legal analysts and industry observers say that without concrete regulations put in place by the U.S. government, it could be up to the courts to decide on a case-by-case basis, applying existing laws to new scenarios and facts.
Given the lack of regulatory framework in the U.S. and our outsized appetite for litigation relative to countries in Europe and elsewhere, automakers are reluctant to commit to further levels of autonomy.

Audi’s current A8 luxury sedan was heralded as a breakthrough when it launched in 2017 thanks in part to its Level 3 self-driving system that didn’t require driver oversight like other current Level 2 hands-free systems like GM’s Super Cruise or Tesla Autopilot do.

What’s also different about Audi’s system? It would have automatically transferred liability from the driver to Audi when the system -- dubbed Traffic Jam Pilot -- was engaged. Because Super Cruise and AutoPilot require driver oversight, despite being hands-free, liability in those cases remains unequivocally with the driver.

Audi eventually scrapped plans to enable its system in the A8 because global regulators had yet to agree on an approval process in time for Audi to make necessary changes.

There have been several high-profile incidents involving Tesla vehicles crashing while the driver had the vehicle’s Autopilot ADAS system engaged. In those cases, liability has largely fallen on the driver because Tesla’s system still requires driver oversight.

Impacts of Liability on Purchasing
Autolist also explored the potential impact driver liability might have on hands-free and self-driving feature consideration and use.

Respondents were asked what impact driver liability would have on a future vehicle purchase. Here’s a look at their responses: 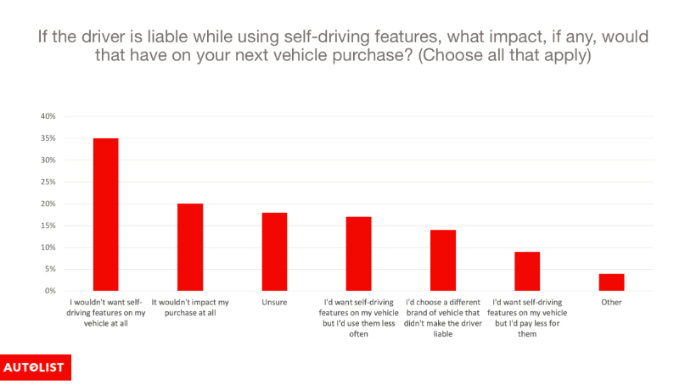 What’s noteworthy about these results, in particular, were the 14 percent of respondents who said they’d choose a brand that didn’t make the driver liable. If some automakers in the U.S. market push liability on the driver, it could open up an opportunity for brands willing to assume that risk. This would include Volvo, which has already said it would assume liability for its vehicles with autonomous highway driving beginning in 2022.

Impacts of Liability on Using
Autolist also asked consumers what impact liability might have on how often they used self-driving systems. 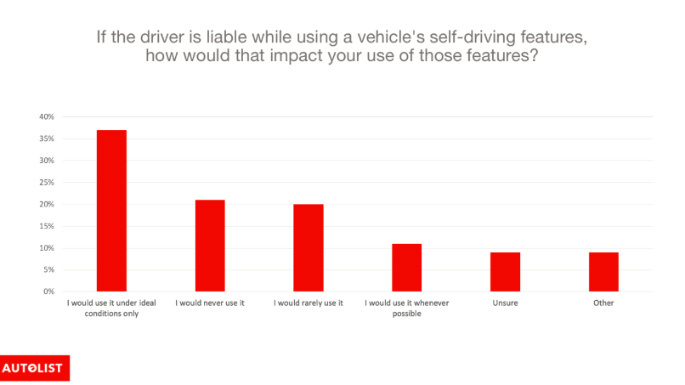 A full 41 percent said they would never or rarely use self-driving features if they knew the vehicle placed liability on the driver in the event of a crash. Here’s a detailed look: