Despite plenty of chatter about the future of self-driving cars, many consumers don’t expect their next vehicle to have any sort of hands-free or self-driving capabilities, and they’re split on whether such systems even make vehicles safer in the first place.

That’s according to a recent survey by Autolist.com, which surveyed 3,380 car shoppers in early 2021 about their sentiments towards ADAS (advanced driver-assist systems) and future self-driving systems.

“These responses tell us that people still see self-driving as a future technology and one that has yet to prove itself,” said David Undercoffler, editor-in-chief of Autolist.com. “Given how often self-driving cars are implied to be just around the corner, we were curious to see when consumers actually expected them.”

Safety Impact
Autolist’s poll asked car shoppers whether they believed self-driving features on a vehicle would make it safer.

The results were evenly split between consumers who said Yes and those that said No: 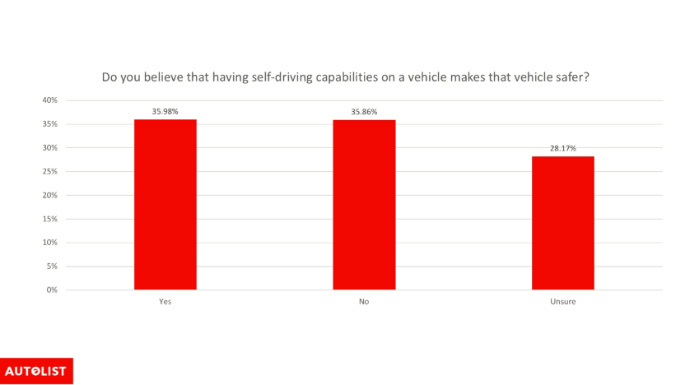 “Some degree of trepidation here is probably a good thing,” said Undercoffler. “It indicates that when consumers do begin to interact with increasingly capable ADAS and hands-free systems, they’ll still feel the very necessary need to stay vigilant even if their hands aren’t on the wheel.”

Self-Driving Horizon
When Autolist asked whether consumers expected their next vehicle to have self-driving capabilities, the responses were as follows: 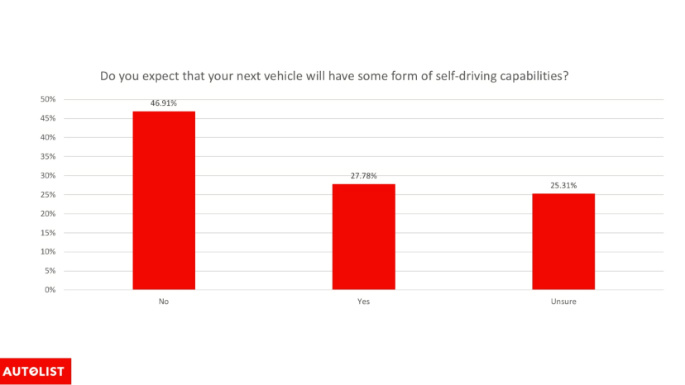 Currently, there are no fully autonomous or self-driving vehicles available on the market. Tesla’s Autopilot and General Motors’ Super Cruise are among the best-known and most sophisticated ADAS systems; both offer hands-free driving in limited circumstances. Ford will roll out hands-free capabilities on certain versions of its F-150 truck and Mustang Mach E all-electric SUV later this year.

Most industry analysts expect it to be many years before consumers will be able to buy a vehicle that is fully autonomous in any driving situation.

“Despite this, the fact that more than a quarter of current car shoppers our poll expect some degree of self-driving capability speaks to a lot of the confusion that’s out there,” Undercoffler said. “The are myriad sources of this, be it the potentially misleading name of ‘Autopilot’ for Tesla’s system, or frequent pop culture or media references to self-driving cars as a current thing — even the 2021 Super Bowl featured an ad with Nick Jonas that mentioned them as existing now.”

Autolist’s survey asked consumers to pick between one and four self-driving-related or ADAS features that they would want most on their next vehicle. The top two answers were features that are currently available today in a wide swath of vehicles:

Meanwhile, the two lowest-scoring features were as follows:

“This drives home the point that consumers don’t yet see the more robust sort of self-driving features as accessible or necessary for their next vehicle, relative to the types of systems that have been on the market for years now,” Undercoffler said.