The 2019 Nissan Pathfinder is a midsize SUV. A five-door, seven-seat crossover with plenty of amenities and safety features, this vehicle is positioned as a family hauler. It competes with vehicles such as the Toyota Highlander, Jeep Grand Cherokee, Mazda CX-9, Honda Pilot, Ford Explorer, Chevrolet Traverse and Volkswagen Atlas.

An optional Rock Creek exterior package has been added for 2019, while the previously available hybrid version has been discontinued. All trim levels for the 2019 Pathfinder come with front-wheel-drive, but all-wheel-drive is also available.

TLDR: A slightly sleeker update on previous models, this version continues with the same dimensions and unibody construction.

Visually, the 2019 Nissan Pathfinder is almost identical to its predecessor. Its styling features slightly curvier lines, however, and boasts a dynamic front with a black mesh grille. The base model of the Pathfinder also has roof rails and 18-inch dark painted alloy wheels, though SL and Platinum trims have 20-inch wheels. 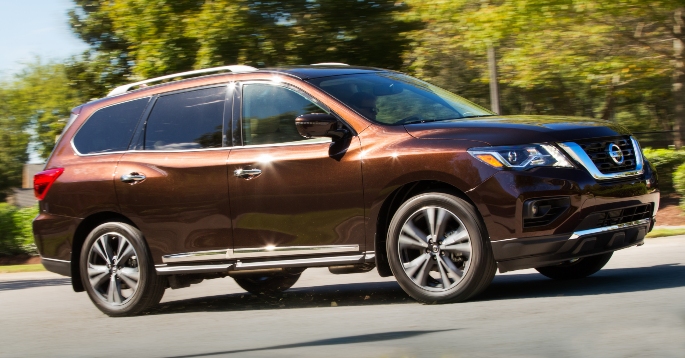 Some reviewers offer mild praise for the sleek yet conservative look of the Pathfinder, while others feel the exterior is bland and unremarkable. 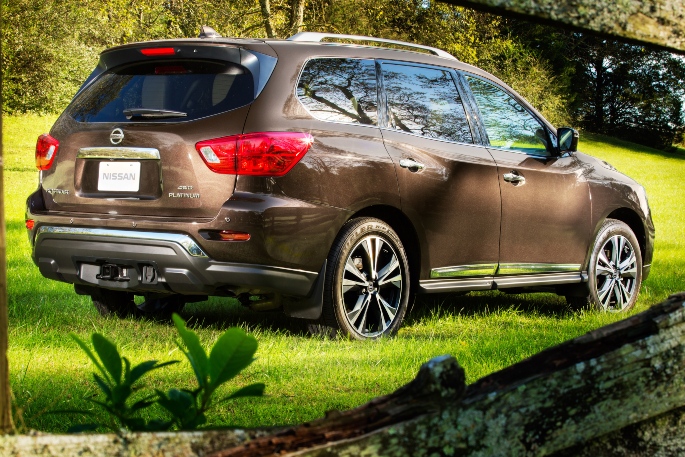 Since this fourth-generation Pathfinder was released for 2013, this SUV has adopted a unibody construction with broad fenders rather than the body-on-frame structure of the earlier iteration. The SL trim features LED headlights.

TLDR: The seven seats are comfortable and ideal for large families, but the dated styling and cramped back rows have received criticism.

A three-row crossover that seats up to seven people, the Nissan Pathfinder has received mixed reviews of its interior. Praise goes to its comfortable seats, while criticism centers on its cramped back rows. Although the second row of seats slides for easier access to the third-row seat, the low positioning of the second row can be tight for passengers. The back rows can hold adult passengers for brief trips. 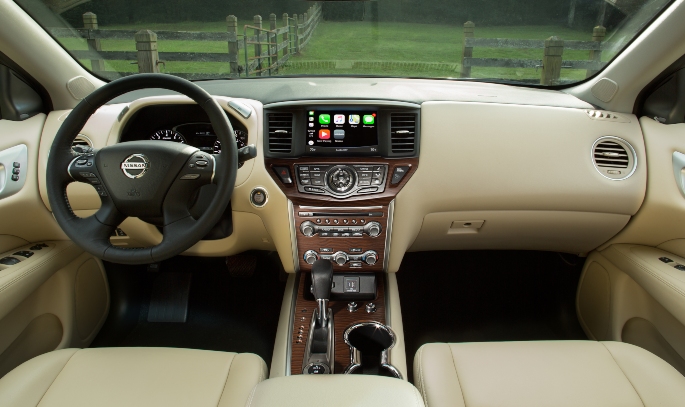 Overall, the cabin looks somewhat bland and dated compared to rivals. Cloth upholstery comes standard with this vehicle, but you can upgrade to leather depending on the trim level. Heated and ventilated front seats are available, as are power-adjustable seats.

Heated steering wheels and heated second-row outboard seats are also available. The second- and third-row door panels have a lot of hard plastic, with unrealistic wood trim that detracts from the vehicle's aesthetic. However, reviews have noted the consistent fit and finish of the interior. 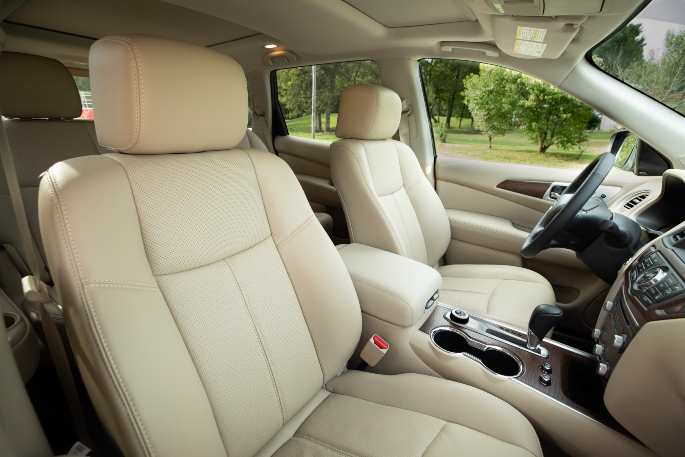 The dashboard is a bit overwhelming, with an 8-inch infotainment touchscreen positioned between climate control vents and almost 20 buttons for controlling audio and navigation. An optional dual-pane moonroof lends the Pathfinder a pleasant, airy interior. The small-item storage space is generous, and all rows of seats feature drink storage. Second-row passengers also have door storage for items such as phones and sunglasses.

TLDR: The vehicle's cargo space is generous compared to rivals when seats are up but less impressive when the seats are down.

This vehicle has 16.2 cubic feet of cargo space behind the third row, which is only enough for some groceries or a couple of items of luggage. 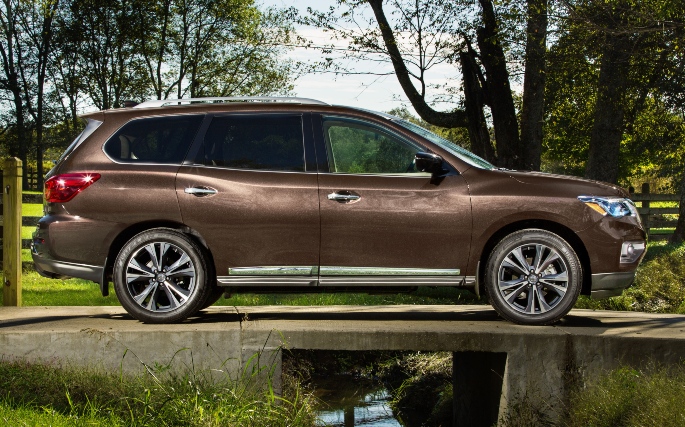 The cargo floor is 31.5 inches above the ground, which is higher than that of several rivals. Unfortunately, the load floor is somewhat uneven, and reviewers have criticized the liftover for being too high. The Pathfinder features an optional hands-free power liftgate for convenience. Also, all trim levels of the 2019 Pathfinder have a towing capacity of about 6,000 pounds, more than most crossover SUVs.

TLDR: A versatile infotainment system comes standard with the 2019 Pathfinder, but neither Android Auto nor Apple CarPlay is available.

The 2019 Pathfinder comes with the NissanConnect system, which syncs your smartphone with the car while you drive. With this technology, you can connect with Facebook, Twitter, Google, and TripAdvisor to check into events, hear messages read aloud and more. The base model also comes with satellite radio, HD radio, a six-speaker stereo and Bluetooth. You can connect devices such as iPhones to the infotainment system and charge them through one of the six USB ports. A $250 wireless smartphone charger is available. Voice recognition comes standard with this vehicle, but it's slow compared to manually tapping the menu screen. 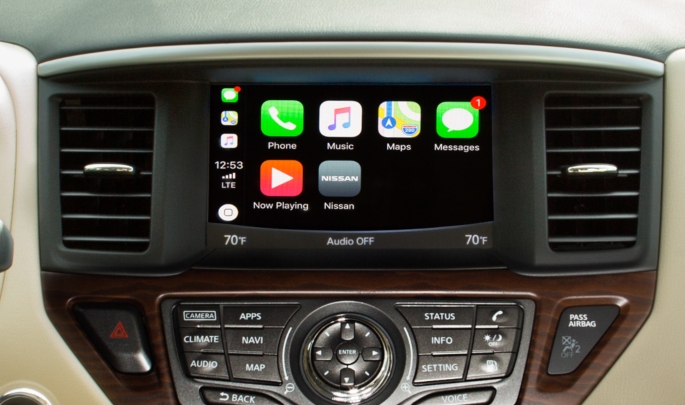 Reviewers praised the infotainment system's quick responses and crisp visuals, but continue to center criticism that neither Apple CarPlay nor Android Auto is available – especially when so many other vehicles off either or both now. You can change the Pathfinder's audio and climate settings via physical controls if desired. Other optional amenities for this vehicle include remote start, navigation, a tri-zone climate control, rear-seat entertainment system, a 13-speaker Bose audio system, and a Wi-Fi hotspot. A convenient tire pressure monitoring system for all trim levels helps you avoid flat tires.

TLDR: This model has received high safety ratings from the NHTSA and IIHS and comes with a wide range of optional safety features.

The 2019 Nissan Pathfinder received a perfect five stars for safety from the National Highway Traffic Safety Administration after undergoing crash tests. Also, the Insurance Institute for Highway Safety gave the vehicle a Top Safety Pick honor, with a Superior front crash prevention rating. However, the IIHS dinged the 2019 model for underwhelming headlight performance and in the passenger's side front test. During collision avoidance safety tests, the 2019 Pathfinder successfully avoided a 12-mph collision and reduced a 25-mph impact by 14 mph. Compared to other vehicles in its class, the Pathfinder is above average in safety.

The 2019 Pathfinder's safety features include a rearview camera, rear parking sensors and an automatic emergency braking system with forward collision warning. Optional safety features include blind-spot monitoring with rear cross-traffic alert, adaptive cruise control and a surround-view parking camera. Also, the outboard second-row seats feature LATCH child seat anchors. You can even keep the child safely seated while sliding the second row forward to access the third row. Despite some safety features recently being made available on some trim levels, the 2019 model doesn't have any new safety features compared to the 2018 model.

TLDR: The engine is reasonably strong, and the SUV handles well. However, the ride feels jittery.

All models of the 2019 Nissan Pathfinder come with a 284-horsepower, 3.5-liter V6 engine with 259 lb.-ft. of torque and a continuously variable automatic transmission. Although base models come with front-wheel-drive, you can buy 2019 Pathfinders with four-wheel-drive as well. While in front-wheel-drive, quick acceleration can cause excessive wheelspin. The continuously variable transmission is also somewhat indecisive at high rpm. Due to the vehicle's relatively low ground clearance, switching to all-wheel-drive is best kept to slippery roads. A hill descent control feature is also available, along with a four-wheel-drive locking system for traction.

Reviewers praise the 2019 Pathfinder's smooth engine and effortless acceleration as well as its broad torque band, noting that it's easy to operate on city streets and highways. The Pathfinder can lean into curves, however, especially in fast driving. The stability control system ensures the Pathfinder never feels too sloppy, and the vehicle's responsive brakes allow for smooth stopping. The 2019 Pathfinder has a stopping distance of 124 feet. Also, the suspension for this model has been retuned since its introduction to alleviate tester's criticisms. Many reviewers criticized the vehicle's sub-par shock absorption, which results in a jittery ride. The Chevrolet Traverse and Honda Pilot have been described as much less choppy. Also, some reviewers dislike the constant droning of the CVT.

Unlike earlier Pathfinders, which emphasized off-road capabilities, the 2019 version is mainly geared toward family transport, with a light capacity for off-roading in front-wheel-drive Pathfinders when the full-lock setting is engaged.

TLDR: No hybrid is available, but this model's fuel economy is decent.

The Nissan Pathfinder SL starts from $38,915. It has all the features of the SV as well as hill descent control, leather upholstery, LED headlights, a power liftgate with position memory, a power-adjustable front seat, a 360-degree around-view monitor with motion detection and a 120-volt power outlet. Options include a navigation system, a moonroof and a 12-speaker audio system with a touchscreen for this trim level.

Starting at $43,565, the high-end Nissan Pathfinder Platinum includes all the features of lower trim levels along with a tow hitch, wire harness, wood-grain interior, front-seat heating and cooling, 20-inch aluminum alloy wheels and tilt-and-telescopic steering wheel. You can also buy a Family Entertainment package for the back seats, which comes with a DVD player, headphones and pair of headrest-mounted monitors.

All trim levels of the 2019 Nissan Pathfinder come with the same 3.5-liter V6 engine and powertrain with 284 horsepower, and they all come standard with front-wheel-drive. However, all-wheel-drive, for an extra $1,690, is also available on all trim levels.

Compared to the rest of the midsize SUV market, the 2019 Nissan Pathfinder is a pretty good deal. All trim levels offer a wide range of conveniences to make driving this crossover a pleasant experience, and high safety ratings make this vehicle stand out from the crowd. However, those looking for the most up-to-date technology, premium-feeling interior, or a flat cargo area need to look elsewhere.